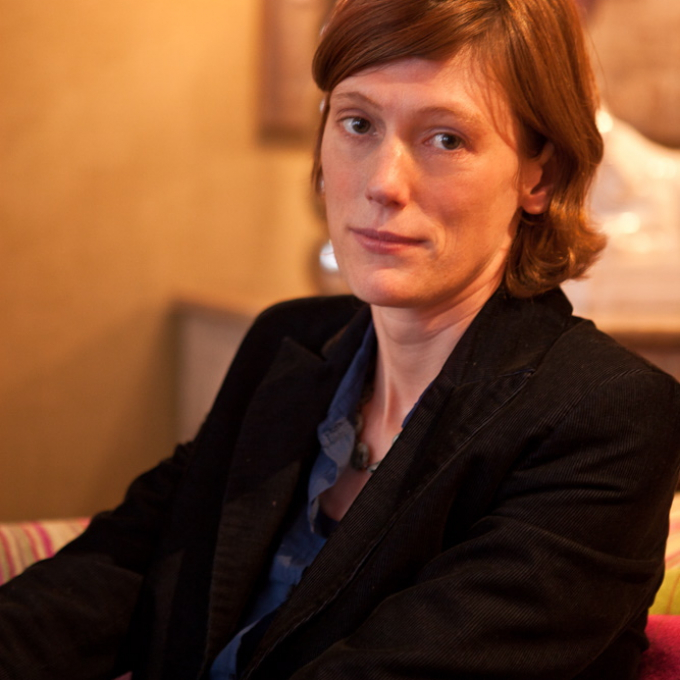 Joanna Kavenna grew up in various parts of Britain, and has also lived in the USA, France, Germany, Scandinavia and the Baltic States.

Her first book The Ice Museum (2005) was about travelling in the remote North, among other things. Her second was a novel called Inglorious (2007), which won the Orange Award for New Writing. It was followed by a novel called The Birth of Love (2010), which was longlisted for the Orange Prize. Her latest novel is a satire called Come to the Edge (2012).

Kavenna's writing has appeared in the New Yorker, the London Review of Books, the Guardian and Observer, the Times Literary Supplement, the International Herald Tribune, the Spectator and the Telegraph, among other publications.

She has held writing fellowships at St Antony's College, Oxford and St John's College, Cambridge. She was named as one of the Telegraph's 20 'Writers under 40' in 2010. She has most recently been the Writer-in-Residence at St Peter's College, Oxford.

In 2013 she was named as one of Granta's Best of Young British Novelists.

Joanna Kavenna’s writing career began with an outlandish voyage: “I was travelling through northern lands, compelled by the endless indeterminacy of a myth: the land of Thule – the most northerly place in the ancient world”

After garnering much acclaim for The Ice Museum (2005), an imaginative hybrid of travel narrative and cultural history, she has developed into a novelist praised for wryly capturing the interior contradictions of modern Britain melancholy. She has published three further novels that continue to demonstrate the cerebral sensibility and cultural reach of her earliest book, while broadening her subject range. In 2013, she was named as one of Granta magazine’s prestigious 20 ‘Best Young British Novelists’.

Kavenna’s work has repeatedly engaged a number of inter-related themes. She is fascinated by the dangerous enchantment of reading, by the intertwined power of art and birth, the tyranny of the modern office, by the pains of the urban versus the joys and delusions of the rural. Throughout, her settings and characterisations have revealed a caustic accuracy in their depiction of the how dreams become misplaced, and how they can succumb to the intoxicating glimmer of precarious utopian fantasies.

Though she has since earned “a reputation as one of the most entertaining, fluent and readable novelists around,”(The Guardian, 2012) her debut was a rather demanding piece of non-fiction. The Ice Museum was an attempt to chart the ancient myth of ‘Thule’, written from the position of a frustrated metropolitan white-collar drudge, a persona that would reappear in her fiction. Her quest was inspired by the Thule she found in literature, as each day on the London tube, she “took another explorer in to the packed carriages,  flicking through another attempt to shade in a few more blanks on the maps.” Inspired to begin her own journey, she severs her ties and heads North to the Scottish Isles, to Scandinavia and onwards to Greenland, mixing lyrical description with the Thulean reflections of Virgil, Strabo, Pytheas, Pope, Bronte, Poe and others.

Like any good travel book it transcended the conventions of the genre. It was part literary-historical anthology, and part polemic, ending with the morbid reflection that Thule itself “might be an accurate forecast of the coming world … the frozen ocean might one day be nothing more than an old fairytale, a story from a vanished world.” But it was perhaps ultimately a meditation on literary ambition and the ambiguous desire for a world where “all edges were vague, falling into shadows”.

To the literary world, her idiosyncratic mixture of research and nature-writing was welcomed as a genre-breaking work in the mould of Robert Macfarlane, himself one of Kavenna’s early champions. It was the immersion in the personal and the life of the narrator that was seen as the real achievement. In the Guardian, Jenny Diski concluded that “once she reaches Greenland and puts herself more personally into the landscape of disappointment, The Ice Museum becomes wonderfully eloquent and compelling” (February 2005).

It was this personal dimension that Kavenna consolidated in her first novel, Inglorious (2007). Centring again on a high-mindedly gloomy office-bound bookworm, this time the protagonist, 35-year old Rosa Lane, chooses not to leave her promising job as an arts journalist for fulfilling arctic experiences, but for an ill-defined life of philosophical reflection. Needless to say, things don’t work out, and her life unravels spectacularly, as she loses her flat, and her boyfriend decamps to wed a close friend, while Rosa retreats further and further into a solipsistic reverie of books and ideas, a descent that has drawn comparisons with Knut Hamsun’s Hunger.

Kavenna’s mordant sense of her protagonist’s ridiculousness helps to elevate what might have been a mundane study of privilege and ennui into a bleakly witty character study. To some reviewers, however, her character was simply not worth the effort of empathy. Sarah Churchwell in the Independent conceded that,  “Without a doubt, Kavenna successfully renders depression. What’s less certain is whether successfully rendering depression renders a novel successful.” (June 2007). The book’s unrelenting focus on stasis and decline was always a challenging task for the novelist, but to other such as Kate Kellaway in the Guardian, “Inglorious [was] a high-risk, one-off” that succeeded through its own “brilliant, paradoxical energy.” (Observer, June 2007). It went on to win the 2008 Orange Award for New Writing.

Its more experimental and wide-ranging follow-up The Birth of Love (2010) diversified Kavenna’s canvas by offering a quartet of voices connected in sometimes abstract ways with ideas of ‘birth’. Of these, two strands are recognisably present day. Brigid is our familiar contemporary Londoner about to give birth for the second time; Michael Stone is a diffident novelist about to ‘birth’ his novel about Ignaz Phillip Semmelweis, the nineteenth-cnetury Viennese pioneer of antiseptics. The last two strands concern Semmelweis himself, and finally a more diffuse voice of a post-apocalyptic England with restrictions exists against birth.  Instead of yoking the novel’s disparate sections together with traditional story lines or characterization, The Birth of Love took risks in relying upon thematic and metaphoric connections. Childbirth becomes her compelling symbol for a range of human endevaours, and gives an otherwise diffuse book a central trope and theme.

Inevitably, the polyphony of the four sections fluctuates in its success, and the sheer range here came at the price of flow and development. At times the cerebral elements overcame the personal that had been so praised in Inglorious. Some such as New York Times reviewer were blunt: about an “ambitious but ultimately unsuccessful new novel” whose “failures may also illustrate one of her most crucial arguments: that ideas are useless without a human context.” (August 2010). However, though the composition might have been slightly less than the sum of its parts, as James Urquhart remarked in the Independent: “For all the unevenness of her quartet of lives, The Birth of Love is still elegantly crafted and compelling.” (May 2010).

Kavenna’s most recent novel is Come to the Edge (2012), which uses a Cumbrian rural setting, to re-examine the ideas of social utopianism that have been present in her work from the outset. Once more, we have a literary-historical narrator with wanderlust, who answers an advert requiring a farm worker and lodger on a remote Lake District farm. Once there, she discover herself in the twilight survivalist world of a new companion, eccentric philosopher Cassandra, who rails against the political economy of modern Britain, and with whom she begins to embark on a Robin Hood scheme to combat rural inequality.

A key interest of the novel lies in its ambivalence to these radical solutions, in how as Kate Kellaway pointed out in the Observer, “at no point does Kavenna do anything as rash as showing her hand.” (August 2012).  The novel expresses sympathy for the concerns and wisdom of its Cassandra’s analyses, and in its quiet rage bears comparison to contemporary Condition-of-England fiction by Nicola Barker among others. Equally, it can be read as a parody of reformist excesses, much in the tradition of Nathaniel Hawthorne’s ‘model community’ satire The Blithedale Romance. Ruth Scurr in the Telegraph read it this way, arguing that Kavenna “cleverly satirises the badly thought-out projects of these would-be reformers: one a leader, the other a follower.” (July 2012).

Kavenna has said that Come to the Edge was "about what happens when you push people too far, when you keep whacking them with one injustice after another - when society gets too plainly iniquitous, and how finally they crack." Her books to date have proved her to be deft at capturing these extreme moments, in which thoughtful and intelligent protagonists flail in the moment of that final ‘crack’.

It is a skill that has lent an intensity and warmth to her fiction, and which promises to long continue. It was no surprise that she was coronated as one of Granta’s ‘Best Young Novelists’ in 2013.