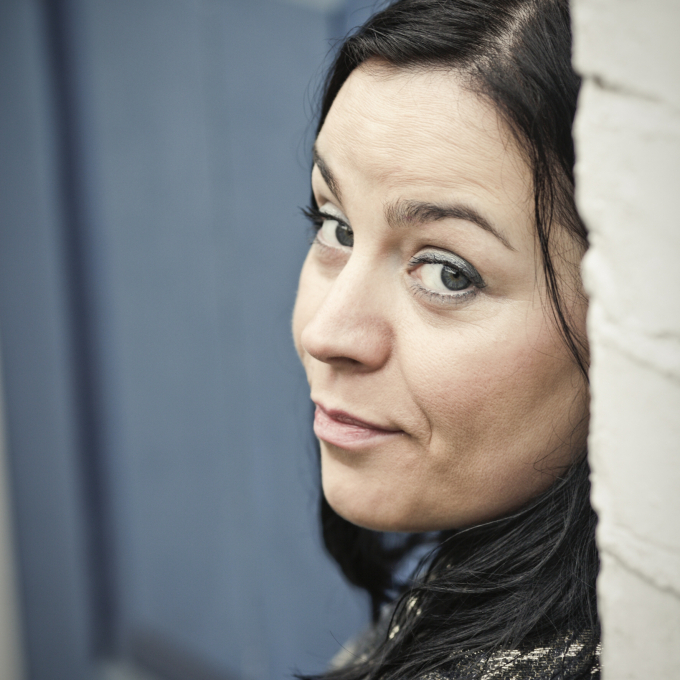 Jenni Fagan’s critically acclaimed debut novel, The Panopticon, was published in 2012 and named one of the Waterstones Eleven, a selection of the best fiction debuts of the year. It has since been published in eight languages and a film is being made by Sixteen Films, for which Fagan herself wrote the screenplay.

Her poetry has been nominated for a Pushcart Prize and her collection The Dead Queen of Bohemia (2010) was named 3:AM magazine’s Poetry Book of the Year and is being published as a wider collection in 2016. Her second novel The Sunlight Pilgrims was also published in 2016.

She holds an MA in creative writing from Royal Holloway, University of London, and currently lives in a coastal village in Scotland.

After a career as a published poet, Jenni Fagan was immediately identified upon the publication of her debut novel The Panopticon as a writer with an important social vision.

On the strength of this promising start, the Scottish author was announced as one of Granta magazine’s prestigious 20 Best Young Novelists 2013.

Inevitably, The Panopticon’s focus on the care system has seen her labelled, perhaps unfairly, as a campaigning writer. In fact she has remarked that her debut "was a book I really didn't want to write, because care is such a hot topic and I'm a very literary writer." (The Guardian, April 2012). Its subject matter is undoubtedly a pressing social issue, offering a bleak vision of contemporary Britain that draws in part on the author’s own experiences of the Scottish care home network. But Fagan is also right to point to its literary rather than journalistic qualities, for it is possessed of an immediately engaging, free-wheeling aesthetic and a demotic, rumbling central voice that is central to its success.

The plot is certainly harrowing: fifteen-year old Anais Hendricks, born in a Scottish psychiatric hospital and passed through a series of foster homes, has turned to violence and drugs. As the book opens, we join her in the back of a police car, arrested on suspicion of assaulting a police officer, and en route to a home for young offenders.  Anais protests her innocence, and begins her wry, troubled rant against the world from the back seat of the moving car as it heads to a new secure unit. The novel details her burgeoning friendships and loves within the sinister old building, the Panopticon of the title (pointedly glossed as “A prison so constructed that the inspector can see each of the prisoners at all times, without being seen”).

Fagan explains that she "was really interested in creating a female character that was very strong and smart but also quite conflicted," remarking of Anais that "she is aware of the context of her life. Kids in care at the age of 15 and 16 are very vulnerable – things could go one way or another for them." (Guardian, April 2012)

It is Anais’s authorial voice that is most striking, described at least half-accurately by one reviewer as  “like going on a joyride with Irvine Welsh‘s teenage sister while off your face on amphetamines.” (For Books Sake, March 2012). On the one hand, readers are assailed by a voice that is caustic and blithely knowing, spewing forth in snatches of expletive-ridden Scottish dialect. She has no time for politically correct pieties (one care worker “reckons she’s a liberal, but really – she’s just a cunt.”); she is blasé about the reputation that proceeds her “about the riots, the dealing, the fires, the fights … the pig in a coma”. Arriving at her new care home, she declares “I hate this. Handovers. New places. Staff. Files. What I want is a hole under the ground to live in. Or a treehouse. Somwhere nobody can see me.”

At the same time, however, readers will be struck by a voice that has a lyrical dreamlike escapist urgency. “There’s wee witches on the inside of my eyelids when I blink. They are always the same ones” “some truths are so heavy that they weigh the whole world and the sea” This lyrical aspect helps propel and at least half-explain Anai’s eventual escape to France, into a dreamlike imagined Paris whose reverie seems somewhat out of place and wildly at-odds with what has gone before: “if you go there, you might see me working in a café, watching the people go by, smoking coloured cigarettes and patting my wee dog”

Tempting though it might be to bracket Fagan with Welsh as part of a Scottish vernacular tradition, her work has larger ambitions, and partakes of wider inheritances. Making this case in a recommendation for TLS Book of the Year 2012, Ali Smith argued the striking narrative style of The Panopticon is less straightforward than we think: “it looks on the surface to be work of a recognizable sort, the post-Dickensian moral realism/fabulism associated with writers like Irvine Welsh. But Fagan's narrative talent is really more reminiscent of early Camus.

Influential mentors such as Smith and Andrew Motion championed the novel. But others took issue with a narrative voice that “displays a somewhat implausible precocity” (The Financial Times, May 2012), or “sometimes falters, becoming too knowing and pedantic, or drifts into social work diagnoses, statistics, newspaper stories and other crude forms of explanation that drain the life out the story” (Lucy Ellman, The Guardian, May 2012).

In interviews. Fagan has suggested that this novel has a definite social agenda. Most obviously, she is outspoken on the topic of social care, and wants to use Anais to raise awareness of a particular forgotten part of the national fabric. “Children in the local authority care system are consistently given excessively negative messages about who they are and what they are, especially young offenders. I began to see this process as dehumanising,” had said in interviews, and wanted to portray “someone who is a product of her environment but who is also fiercely intelligent and engaged in the world.” (Royal Holloway website).

More broadly, as the suggestive title hints, this is a novel with things to say about surveillance culture, and betrays Fagan’s own intellectual background in critical theory and the work of Michel Foucault.  “The Panopticon as a building is a great metaphor for the modern world we live in,” she explains.  “We all observe each other constantly, through social media, at work, at home, while simultaneously being constantly observed by CCTV.” And as Anais puts it in her typically astute and strident fashion, this is something we all willingly create for ourselves: “I dinnae get people, like they all want to be watched, to be seen, like all the time. They put their pictures online and let people they dinnae like look at them!”. (Royal Holloway website.)

As she recently told The List “I have seven novels outlined, all of them are different. I have started one called Copernicus, based in a small caravan park near a waste-ground outside some un-named Scottish city. It has vast landscapes, odd characters, and set against a backdrop of the aurora borealis. It’s a bit David Lynch, a bit Sigur Rós, but mostly just me. I have no idea where it’s going.” (April 2012)

After such success with a debut she “really didn’t want to write” the next move following her coronation by Granta will be a move of interest to her growing body of appreciative readers.

@Jenni_Fagan RT @reversediorama: Every day for the past week I’ve exchanged letters with Egor in Russia, and now a Russian newspaper has published them…
(9 hours ago)