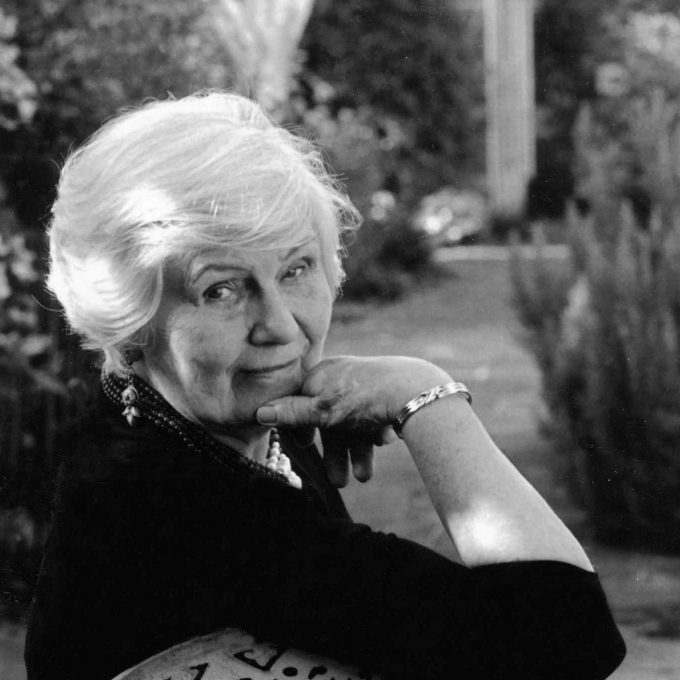 Novelist Jane Gardam was born Jean Mary Pearson in Coatham, North Yorkshire on 11 July 1928. She was educated at Saltburn High School for Girls, and won a scholarship to the University of London where she read English at Bedford College. In 1951 she worked as a Red Cross Travelling Librarian to Hospital Libraries, afterwards taking up editorial posts at Weldon Ladies Journal (sub-editor, 1952) and the literary weekly Time and Tide (Assistant Editor, 1952-4).

Her first book for adults, Black Faces, White Faces (1975), a collection of linked short stories about Jamaica, won both the David Higham Prize for Fiction and the Winifred Holtby Memorial Prize. Subsequent collections of short stories include The Pangs of Love and Other Stories (1983), winner of the Katherine Mansfield Award; Going into a Dark House (1994), which was awarded the PEN/Macmillan Silver Pen Award (1995); and Missing the Midnight: Hauntings & Grotesques (1997).

Jane Gardam's first novel for adults, God on the Rocks (1978), a coming-of-age novel set in the 1930s, was adapted for television in 1992. It won the Prix Baudelaire (France) in 1989 and was shortlisted for the Booker Prize for Fiction. Her other novels include The Queen of the Tambourine (1991), a haunting tale about a woman's fascination with a mysterious stranger, which won the Whitbread Novel Award; Faith Fox (1996), a portrait of England in the 1990s; and The Flight of the Maidens (2000), set just after the Second World War, which narrates the story of three Yorkshire schoolgirls on the brink of university and adult life. This book was adapted for BBC Radio 4's Woman's Hour. In 1999 Jane Gardam was awarded the Heywood Hill Literary Prize in recognition of a distinguished literary career.

Her non-fiction includes a book about the Yorkshire of her childhood in The Iron Coast (1994), published with photographs by Peter Burton and Harland Walshaw.

She also writes for children and young adults. Her novel Bilgewater (1977), originally written for children, has now been re-classified as adult fiction. She was awarded the Whitbread Children's Book Award for The Hollow Land (1981) and is the author of A Few Fair Days (1971), a collection of short stories for children set on a Cumberland farm, and two novels for teenagers, A Long Way From Verona (1971), which explores a wartime childhood in Yorkshire, and The Summer After the Funeral (1973), a story about a loss of innocence after the death of a father.

Jane Gardam is a member of PEN and a Fellow of the Royal Society of Literature. She is married with three children and divides her time between East Kent and Yorkshire. Her latest books are The People on Privilege Hill (2007), a collection of short stories, and the novels The Man in the Wooden Hat (2009) and Last Friends (2013). Last Friends was shortlisted for the Folio Prize. In 2014 a collection of her stories was published as The Stories of Jane Gardam.

Jane Gardam has been writing for a long time, and has published many novels.

She is in the fortunate position of having a great deal of her work in print; in 2005 she was shortlisted for the Orange Prize for Fiction. In spite of all this, she remains a curiously little-known figure, and there is a seeming reluctance to think seriously about her novels. Perhaps she suffers from the Penelope Fitzgerald problem: effortless ease, with no kow-towing to fashionable cultural and literary themes. She is certainly a storyteller, demonstrated by her success with books for children; she is also a serious artist, more so than is readily apparent. As Amanda Craig writes, ‘her originality takes time to perceive simply because she is such fun to read’. (The Independent, 11 January 1992). Every artist will have unifying factors in their work; Gardam’s are subtle, but they are there.

Queen of the Tambourine (1991), winner of the Whitbread Novel Award, stands at the centre of Gardam’s writing career and thus embraces the strengths of her earlier and later work. The novel presents the letters of Eliza Peabody, a middle-aged, middle-class housewife, to her friend and neighbour Joan, who has left her family and the street. Joan, however, does not reply, and as we progress further it becomes clear that Eliza veers between eccentric and mad, as reported events (such as a University professor disappearing down a drain) become more and more strange. In true postmodern fashion, we cannot trust the narrator nor know the truth. This interest in the delusional is a key theme in Gardam’s work, although the author suggests that

‘What I really write about is sanity: the idea that often you can cure yourself if, like Eliza, you're brave enough to look. My characters become sane. Perhaps it’s because I come from a very unmad Yorkshire family.’

The insistent, desperate correspondence evokes the 18th-century epistolary novel, most particularly Samuel Richardson’s Pamela, where the imprisoned heroine’s letters turn into a journal, as she despairs of anyone hearing her voice. Craig has observed that: ‘Robust and delicate, [Gardam’s] novels have a curiously eighteenth-century flavour.’ The author, in a beguiling dream sequence, lets Eliza ascend in a circus wheel with a dead man, to symbolize her freedom, which may signal the return to sanity Gardam talks of - but perhaps the rel wonder of the book comes from the open ending: is this the real Joan who has suddenly appeared, or has Eliza returned to her dreams? Ambiguity, possibility, imagination and freedom mark Gardam’s work, then, along with her interest in form, eccentricity, and the eighteenth century.

If Gardam writes of the middle-aged and old, she is equally notable for her child heroines, and for the sophistication with which she treats them. Thus Bilgewater (1977) is a delicate coming-of-age novel characterised by the quirky intelligence of its narrator, a teenage girl able to see the absurdities of everyday life in a small town on the North East coast of England. For Gardam, the child or teenager as narrator has the added attraction of being outside accepted discourses, able to see the fissures and offer a challenge. This is a similar technique to that of the novelist Emma Tennant, although Gardam’s approach is lighter, less self-conscious and more comic. There is further evidence of this in a novel from the same period, God on the Rocks (1978):

‘She may still be changing.’
‘Changing!’
‘Yes, dear, Binkie always changes in the afternoons.’
(From what? Into what? Spiders? Fairies? Serpents?...)

Both novels contrast energy and anarchy with conformism. In God on the Rocks, a character breaks down doing the church flowers: ‘The rest of the flowers had fallen out and lay around as if they had been flung by some explosion’; in Bilgewater, the collection of disturbing puppets that Marigold finds a ‘boyfriend’ making, based on people they know, seems to evoke comic disruption, as do the Pierrots on the beach in both books. Both novels are also memorable in evoking a sense of place, both of the sea, and in Bilgewater, of urban Middlesbrough:

‘Far away behind the twenty thousand identical streets were the lights of some unloved tower blocks and beyond these a city of fluorescent light, pencil chimneys with small orange paint-brush heads of flame, flares, blazes of fire from furnaces, and wafting smells of gas.’

The North East coast is also the setting for Crusoe’s Daughter (1985), Gardam’s most serious and sophisticated novel, which again shows a child, later a teenager, in quiet conflict with the adult world: Polly Flint lives in the strange Yellow House all her life, sustained by literature, most notably the work of Daniel Defoe. Again, Polly’s perspective allows for some comedy, when she unknowingly describes Virginia Woolf: 'She is called Mrs. Wolf which is inappropriate for she is more horse or unicorn-like.' Polly is not always an obviously lovable character, but Gardam makes us keep our sympathy; this sympathy will grow in the most recent novels.

Reviewing Faith Fox (1996), Candia McWilliam spoke of the author’s unusual ability to make us care about almost every character; she added that ‘time and again, Jane Gardam sets up what looks like one thing and shows us the many ways of looking at it… [she] secures tolerance, which is a crucial law in the world of her fiction’ (The Independent, 14 April 1996). The growth of this tolerance, since Queen of the Tambourine, has been married to an increasingly successful ability to speak in her characters’ voices, resulting in an easy and appealing humour when she narrates in the comic, bossy style of creations like Thomasina and Holly in Faith Fox. But Gardam can equally well create verbal images of beauty: in Old Filth (2004) a family are ‘talking their pointless evening birdsong’; King’s College chapel ‘reared up like a white cruise liner on a grassy sea’; and, watching snowflakes, the elderly judge at the centre of the story sees that ‘They fell and fell. They danced. They mesmerized.’

Faith Fox and Old Filth are Gardam’s most immediately easy and touching novels, then; but this ease and appeal is the result of serious work at a craft. It is best to sum up the author’s intentions and achievement in her own words: ‘I think you’ve got to play about with form all the time. You can make a book too beautiful. Symmetry is the English disease.’ Or, in the words of her heroine in Crusoe’s Daughter: ‘Every serious novel must in some degree and UNNOTICEABLY carry the form further... It may fail - but better to be sorry than safe. All the time it must entertain. No polemics. No camouflaged sermons.’