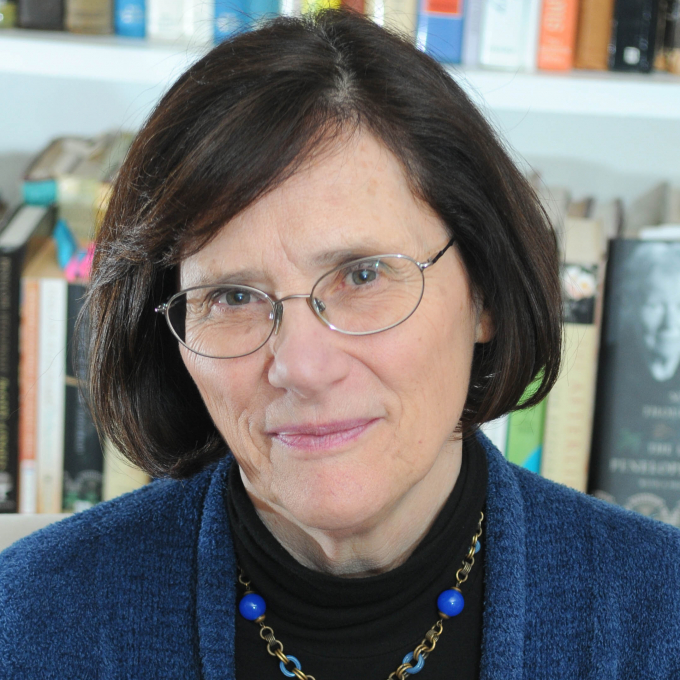 Critic and biographer Hermione Lee was born in Winchester, England in 1948 and grew up in London.

After graduating from Oxford University, she lectured in America and taught at the Universities of Liverpool and York. She is Goldsmiths' Professor of English Literature and Fellow of New College, Oxford. A judge for the Booker Prize for Fiction in 1981, Hermione Lee presented Channel 4 Television's first book programme, 'Book Four', between 1982 and 1984 and is a regular broadcaster for BBC radio. She is also a regular reviewer for various newspapers and magazines, including the Observer and the Times Literary Supplement.

Her first book, The Novels of Virginia Woolf, was published in 1977. She has written critical studies of Elizabeth Bowen and Philip Roth and has edited editions of work by Stevie Smith, the American author Willa Cather and Virginia Woolf. She is the author of Willa Cather: A Life Saved Up, published in 1989, and her acclaimed biography of Virginia Woolf won the 1997 British Academy's Rose Mary Crawshay Prize for English Literature. She has also edited the popular anthology of women's short stories The Secret Self: Short Stories by Women (1985).

In a period when contemporary literary criticism has become increasingly specialised, isolating itself from those outside the academy, Hermoine Lee's work has continued to attract both popular and academic audiences.

Lee's biographical, editorial and critical work is impressive both in terms of its scholarly rigour and its ability to translate and render compelling the esoteric, notoriously 'difficult' writers and works of high modernism. Lee works across a range of media, notably as a reviewer and contributor to The Observer (between 1982 and 1986) and as the presenter of Channel 4's pioneering book review programme, 'Book Four'.

Arguably though it was the monumental biographies of Willa Cather and Virginia Woolf that secured Lee's international reputation. Willa Cather: A Life Saved Up (1989) is a remarkable portrait of a key feminist icon, undoubtedly one of the most important writers of twentieth century America. In the biography Lee narrates an 'inner journey', a journey that also takes the biographer/reader on a pilgrimage to Virginia and Nebraska, where Cather grew up. The result is an alternative 'life' of this pioneering novelist who died in 1947. Where earlier biographies of Cather expose her nostalgia for the American pastoral, Lee combines historical and psychoanalytical interpretations to present a much less stable, more unsettling account of the author, her sexual insecurities and multiple personalities. For example, Lee reveals Willa Cather (who also referred to herself as 'William') as a 'cross-dresser' both 'in her life' and 'in her writing'. Where earlier biographies skirt around or crudely assert Cather's lesbianism, Lee attends to the nuances of her sexuality, the ways in which she works through 'indirection, suppression, and suggestion, and through a refusal to be enlisted'.

At one point Lee associates Cather's sexuality with Virginia Woolf's sense that androgyny is the ideal state of the artist. Woolf, of course, was the subject of Lee's next major biography. Virginia Woolf is a penetrating, persuasive and refreshing account of the modernist writer. The book is even more astounding given the wealth of research previously dedicated to Woolf's biography. As with Cather, Lee manages to offer fresh insights into a 'life' many thought had already been 'exhausted'. Not only does she offer valuable new interpretations of the writer's life, she also manages to simultaneously and succinctly situate her interpretation in relation to previous biographical accounts. The 891 page study opens, not with the birth of Woolf, but with a problematisation of biography itself 'My God, how does one write a Biography?' As with her earlier biography, Lee combines a careful reading of the historical and political contexts surrounding Woolf with intimate details of her illnesses and insecurities. This authoritative study moves deftly between the personal (the sound of Woolf's voice, the style of her clothes) and the political (Woolf's struggles for feminism and against fascism).Though best known for her biographies, Lee is also a significant editor and critic and has produced two separate volumes of literary criticism, Philip Roth (1982) and The Novels of Virginia Woolf (1977). The latter, somewhat ironically given her more recent work, aims to turn attention 'back from the life to the fictional work' and offers a detailed study of each of Woolf's nine novels. Published over twenty years ago, the book remains a perceptive and illuminating introduction to the author's work.

One of Lee's most recent publications is the text of her inaugural lecture, first delivered at Oxford University. Reading in Bed (2000) is a brief but brilliant piece offering an entertaining, insightful history of women's reading in the twentieth century. In the lecture Lee explores the subversive implications of domestic reading, considering such private acts in relation to the wider politics of censorship in the West. The text goes on to interrogate the tensions between sanctioned and unsanctioned modes of interpretation. These are tensions, Lee argues, that have had a particular impact on women readers. Reading in Bed (hopefully the beginnings of a larger project) not only asks us to think about how others read, it also crucially asks us to re-think and in a sense 'read' our own ways of reading.

Shifting the emphasis from reading to writing, Lee has more recently published a collection of 18 essays, lectures and reviews, Body Parts: Essays on Life-Writing (2005). The volume addresses one of the key dilemmas of the biographer: how to deal with the gaps, uncertainties and absences that inevitably emerge between the documents left over from a life? As Lee summarized it in an interview in 2006: 'You can never have a complete, consecutive, polished narrative because there’s so much you don’t know. I don’t think biography can become a completely relativist, amorphous, querying form, it’s got to keep its tapeworm of story and chronology and so on.' By turns informative and entertaining, the collection covers everything from Shelley’s heart (sandwiched between pages of a book) to Virginia Woolf’s nose (or at least the prosthetic version worn by actress Nicole Kidman in The Hours).

With her biography, Edith Wharton (2008), Lee has further extended her reputation as a chronicler of the lives of early 20th-century women. This 853-page study has received almost universal critical acclaim, and in the Financial Times, John Sutherland wrote: 'Anyone embarking on a reading of Wharton will deny themselves full appreciation if they do not consult Lee, whose biography is now the necessary accompaniment.'  The biography (the first by a British author) contributes a more nuanced understanding of Wharton’s European life than has hitherto been available. It also breaks new ground in revealing Wharton as a writer more in touch with modernity and sexuality, less genteel and nostalgic than had been previously thought.