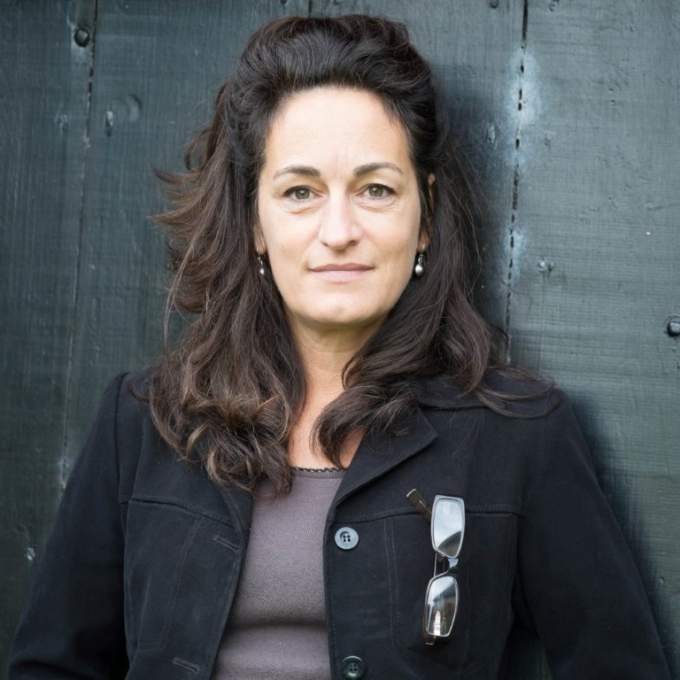 Greta Stoddart was born in Henley-on-Thames in 1966, and grew up in Belgium and Oxford.

Her poetry has been published widely in magazines and anthologies, and her first collection, At Home in the Dark, was published in 2001. It won the Geoffrey Faber Memorial Prize and was shortlisted for the Forward Prize (Best First Collection).

In ‘The Convert’, the suggestive opening poem of Greta Stoddart’s debut collection, the poet describes how she is amongst those who are ‘at home in the dark’: favouring ambiguity and possibility over reductive certainty and clarity, like ‘the curved black acres’ and ‘hard little stars’ that make a child ‘no longer care / for the seeable horizon, the bright seasons’.

In many respects, the poem is a manifesto piece; a statement of intent that has governed much of Stoddart’s work to date. Aside their sometimes energetic pace and conversational tone, her poems possess an elegiac, alluring music, occasionally reminiscent of Carol Ann Duffy’s early work, and also display a MacNeiceian melancholy; a cool-headed emotional restraint ensuring that they are rarely self-indulgent. This is employed to particular effect in poems that deal with the complexities and contradictions of modern relationships: the narrator in ‘Faithful’, for instance, ‘content / night after night to bed down with you / but turn to the window we keep shut fast – / the better to make a running jump, the break’. As Sarah Crown stated in The Guardian review of her second book, Salvation Jane (2008), Stoddart’s real skill emerges in her preoccupation with these, and other, uncertainties, conjuring ‘a seesaw poetic universe in which every action has its opposite and emotions are never unequivocal’.

Aside from being shortlisted for other major prizes, At Home in the Dark (2001) won the prestigious Geoffrey Faber Memorial Prize, no doubt due to its making for an unusually accomplished first collection. It also contains much thematic variety. As David Wheatley perceptively stated in the Times Literary Supplement, the book ‘abounds in epiphanies of self-discovery through disorientation’: from the ‘dots and swirls’ of an optical illusion in ‘Magic Eye’, to ‘The Night We Stole a Full-Length Mirror’, a deftly-controlled stream of consciousness piece that begins with the poet stealing a mirror from a skip and develops into a provocative reflection on relationships, sex, guilt and perspective. Perhaps the best of these emotionally introspective, often ambivalent personal poems is ‘Allies’, adopting the narrative voice of a younger self; a girl whose world is changed forever when she realises that her mother is not the person she thought she was. After being sent home early from school with her brother and sisters, the young poet finds her mother’s bedroom door closed:

‘I didn’t know that room had a door till I saw it shut.The house had tried to seal itself against us,and even the dog bristled, but my brother, idiot,never one to listen, listened at the door, then pushed.I was curious that you came out fully clothed and so quickly,proud that all you did was zip up your thigh, flick your hair, look flushed and embarrassingly young.My sisters stared at the ground, doomed. But me,I like to think I looked you straight in the eye.’

The economy and deceptive simplicity of these lines keep the complex relationship between poet and mother partly ambiguous, leaving the reader to devise their own conclusions. This is an effect which Stoddart also employs in At Home in the Dark’s less personal poems, such as ‘Arcturus’, an ecological piece which describes polar bears being ‘drawn to the edges of towns’ now that ‘nowhere is cold enough’. Here, the poet speculates whether ‘there’ll come a time we have to leave, / flee as once we fled burning cities / and through a zoom lens see Earth turn / in a shroud of scorched and poison wind’, before the poem concludes with a harrowing image of the old bear ‘having spent / [its] last days pacing the dusty yard, / swinging [its] head against a concrete wall, / blind to the scraps of fish rotting in the sun’. The poise and precision of these lines and images exemplifies what Jamie McKendrick has called Stoddart’s ‘prescient, unflinching gaze’, something particularly apparent in ‘The Fitter’, which muses on the unusual taxidermic job of acquiring and affixing eyes to stuffed animals. This poem gathers momentum as the poet imagines a ‘slip’ in the artist’s concentration, resulting in ‘an upright grizzly in the Natural History / [who] has the eyes of a man stranded in his front room, / the telly blizzarding, the fire gone dead’. But however unusual a subject matter, it is fitting that Stoddart should feel a certain affinity to such work: the precise, striking and often unnerving products of her own creativity borne of being ‘at home in the dark’, just as the fitter’s ‘eyes brim at night from all the detail / […] and it takes him a while to sleep’.

Stoddart’s second collection, Salvation Jane, was published in 2008. It continues to explore the uncertainties and ambiguities which dominate her early work. Aside further unpicking of the faultlines inherent to relationships (the domestic inconsequentiality of Christmas captured in ‘A Puzzle in Four Seasons’; the kid dragged ‘kicking and screaming round the shops / by a woman […] / who says she doesn’t know why she bothers’ in ‘Really’), the vignette ‘Instrument’ even begins to question the purpose of metaphorical conceits: ‘All this wind and rain [that] could so easily go / without saying’. Unlike At Home in the Dark, however, many of the poems included here are often more overtly philosophical in their direction. Opener ‘Pupil’, for instance, muses on our lives as marooned consciousnesses, incapable of much beyond subjectively skewed perspectives, how ‘I could no more know / myself than this flame / seated in the air / one quarter of an inch / above its burnt root / - so self-contained a form / you’d think it held in ice’. And while admittedly this is a theme recurrent in much contemporary literature in our postmodern era, unlike many, Stoddart does not shy from articulating the anthropocentric root of the problem: suggesting that if we could return an animal’s gaze ‘so void of an idea of self […] // we might learn / to take something from / nothing, might begin / to steady and see, / figure who we are / in that slit black flame’.

Salvation Jane also contains some adroitly metaphysical studies of commonplace objects and items, often unravelling their human purpose and restoring to them their otherworldliness. In ‘Plastic Bag’, the item’s diverse uses give it a fluid, haphazard identity: ‘up in the attic / with your sad hoard / of baby clothes and love letters; // deep in a hole / […] wrapped around a house sparrow / we almost had / eating out of our hands’. In fact, the title of the collection refers to a plant that is similarly paradoxical, though entirely less familiar: a ‘little purple sturdy thistle’ that is both ‘beekeepers’ gold’ and a ‘chemical-resistant infestor of cereals’. Much of this ties in with the numerous maternal poems and memories of childhood which pepper the collection, from efforts to pinpoint nothingness in ‘Philosophy for Children’ (‘Death, Space, Eternity / heaved into the airless room / but we saw through them’) to the whimsical opening and dark, brooding denouement of ‘At Play’. Throughout Salvation Jane there is a sense of a poet not only engaging with the peculiar paradoxes and wavering vicissitudes of life, but also attempting to make some sense out of them. Her ample abilities already proven, it could well be that Stoddart’s future work will succeed in fully realising this project.