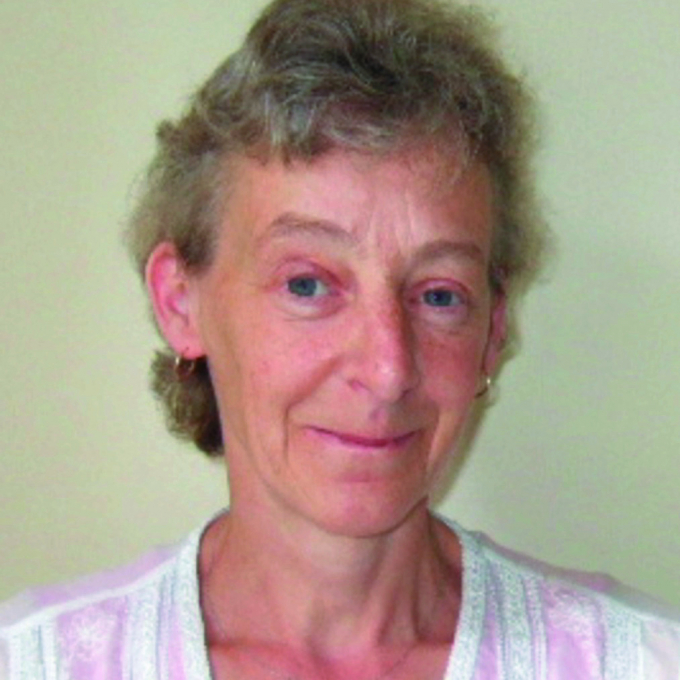 Gillian Allnutt was born on 15 January 1949 in London, but spent much of her childhood in Newcastle upon Tyne.

She was educated at Newnham College, Cambridge and the University of Sussex.

Since 1973, she has taught English and Creative Writing in London and Newcastle upon Tyne, and has also worked as a performer, publisher, journalist and freelance editor. She was a collective member of Sheba Feminist Publishers (1981-3), and from 1983 to 1988 was Poetry Editor at City Limits magazine.

Gillian Allnutt’s highly original qualities as a poet of northern scenes and spiritual concerns are evident throughout How the Bicycle Shone (2007), her volume of new and selected poems.

Their mystical bent is expressed in language at once spare and musical, austere in tone yet full of sympathetic human feeling. Alongside the moral seriousness, there is also a vein of Stevie Smith-like humour, which appears in zany homely images and phrases. ‘My Cross’, for instance, summons up "Great Aunt Agnes, with whose saintly name / Very little indeed will rhyme", and her christening gift of a "pagan, strange and in fact Egyptian" cross. "Ankh means life, says my Concise Oxford Dictionary", it continues, "And I wonder why there is as yet no Insurance Company / With such a sturdy helpful name. / Perhaps I will start one". Such an offbeat work is in amongst others in Blackthorn (1994) that arise from far more serious matters. For instance, her father’s war experience in helping to liberate Belsen Concentration Camp; he came home "with bits of it under his skin and the bowl of his heart in his hands / …. And, in his pocket, proudly, the souvenir spoon" (‘The Swastika Spoon’).

When reviewing How the Bicycle Shone, Sean O’Brien identified "the listening stillness of Allnutt’s contemplative notes and meditations", which "belong equally to the traditions of religious enquiry and poetry". He commended her "scrupulous effort to balance feeling with the effort to understand and be reconciled to loss". In conclusion, he called hers a poetry "of keeping faith, of remaining open to enlightenment" (Sunday Times, 22 July 2007). We can identify these characteristics in Allnutt’s work almost from its outset in Spitting the Pips Out (1981). In ‘mother you never told me how to mend’, she rewrites a Shakespearean metaphor as traditional female work: "all the world’s a sheet / and all the women in it here to turn / sides to middle when it gets torn". Then there is echoing of the famed opening line of ‘Daddy’ by Sylvia Plath: "it does not do and it does not do / to sit all day and sew". Yet its essential analogy is with the soul ("worn thin with wondering") and how "the light of another world filters through / these bare threads".

Beginning the Avocado (1987) contains a delightful ‘Ode’, one of her best-known poems, though also (in its playful eroticism) somewhat uncharacteristic. This is a love poem to her bicycle, "O my trusty steed, / my rusty three-speed", of which she confesses, "I have spent sleepless nights/ in pondering your parts – those private // and those that all who walk the street / may look at". But elsewhere in the book tragedy intrudes on personal lives, whether ‘Hiroshima, 1945’, "the trouble in South Africa" (‘At Dinner’), or mourning the suicides of Virginia Woolf, Plath and Marina Tsvetayeva: "I cannot say it is love stops short / of the rope / or the river / the quiet caress of gas in an uncaring winter". In the heart / avocado stone analogy of the title poem, "The stone / remembers // to root / me in another time". Then "the poem itself splits / open, letting / in // death".

After living and working in London for the best part of two decades, during which she was poetry editor of City Limits magazine, Allnutt returned in 1988 to her Tyneside home territory and was clearly inspired by this harsher northern climate. Poems such as ‘About Benwell’ and ‘After the Blaydon Races’ take a rather jaunty look at these run-down places and "people with faces like broken promises". Indeed, in the latter, "the big yellow bus of the sun bowls breakneck into Benwell also". The autumn sunshine is positively cheerful: "Shall the old yellow bus, October, stop and beautifully steep us / in its pennyworth of ale, its picnic // cloth of gold unfolded on the rough grass?". The landscape seeped into her work in meditative, quasi-religious ways: "Of the metaphysical waters of Tyne and of the hills / I shall think, // of my elliptical heart, of the moonlight / speaking with tongues" (‘Letter to’). And, on ‘Clara Street’, "The river’s a common language // and the lit stones of the yard / attentive".

With the publication of Nantucket and the Angel (1997), short-listed for the T.S. Eliot Prize, Allnutt’s work assumed a higher degree of recognition. The collection again intersperses serious and homely scenarios, evocations of spiritual yearnings with occasionally whimsical notes. ‘The Singing Pylons’, an example of the latter, "mumble on dark summer days", and "O all night long they sing / Their lonely song, like whales uninterrupted, to Esh Winning / And, if they could, they’d sit down / And weep by the waters of Wear". Esh Winning, another poem informs us, is the place where the poet has a garden: "Who pulls the purple columbines / Out of the not quite dark midsummer midnight?" In the house, "full of visions", the Bible is "propped like an elbow on the ironing-board within". These domestic (somewhat William Blake-like) visions are of "the little thud of angels" with "their pomegranate smell". Sitting in a rocking-chair, she can hear the angels "come and go // between the kettle and the fire" (‘After Breakfast’). Other poems (‘Annunciation’, ‘Epiphany’) similarly conjoin the visionary and the everyday, while, in ‘The Garden’, "You were in love with the splendid / rosewood of the Word. // And now the word rose weeps for you".

The respectful critical acclaim that greeted Lintel (2001) and Sojourner (2004) no doubt helped secure her the prestigious (as well as lucrative) Northern Rock Foundation Writer’s Award in 2005. The poems in these volumes are full of Biblical, historical or family characters and their fragmentary stories, voices that insist on being heard: "I am not lost. I harbour my loneliness here / By the larkspur". There is also the voice of the poet talking to herself: "It is the road to God / that matters now, the ragged road, the wood. // And if you will, drop pebbles here and there / like Hansel, Gretel" (‘The Road Home’). Paintings and the music of Arvo Part now inspire her. There’s the perspective of the past to meditate upon, as in ‘Literature in Childhood’, and (in its brief entirety) ‘The Fifties’: "There were windows the war had left alone. / Imagine. / A world that would open".

The final section of How the Bicycle Shone contains her most recent poems, Wolf Light (2007), more pared-down and at times prayer-like. Female characters from the Bible again feature, Mary Magdalene and "a woman of Samaria". Perhaps most notable is a sequence in memoriam to her father and mother, meditating on their lives, deaths and their marriage. This is movingly encapsulated in a ‘Requiem for All Souls’, held, a note informs us, at Durham Cathedral in 2004. This evokes "mother, everywhere" whose body is "gone to bone then cinder", while "Men, like wooden gods, like war, go on". Often strange, musically rich and psychologically intense, Gillian Allnutt’s peculiar visions continue to fascinate us.

@LitBritish RT @NewWritingNorth: We're thrilled to announce the longlist for the #GordonBurnPrize 2021! 🎉 Featuring brilliant work by @CalebANelson @c…
(2 days ago)

@LitBritish RT @WritersCentre: ‘They are the writers of an emerging world – or, at least, the best that we might imagine that world to be.’ REVEALED:…
(2 days ago)

@LitBritish The most recent International Literature Showcase features 10 exciting emerging writers working in the UK as select… https://t.co/hM1oBkcs71
(3 days ago)

@LitBritish ‘Please read these writers. Yes, they are amongst the best of the UK’s emerging writers, but it is more than that.… https://t.co/zNpJKGCzFX
(3 days ago)