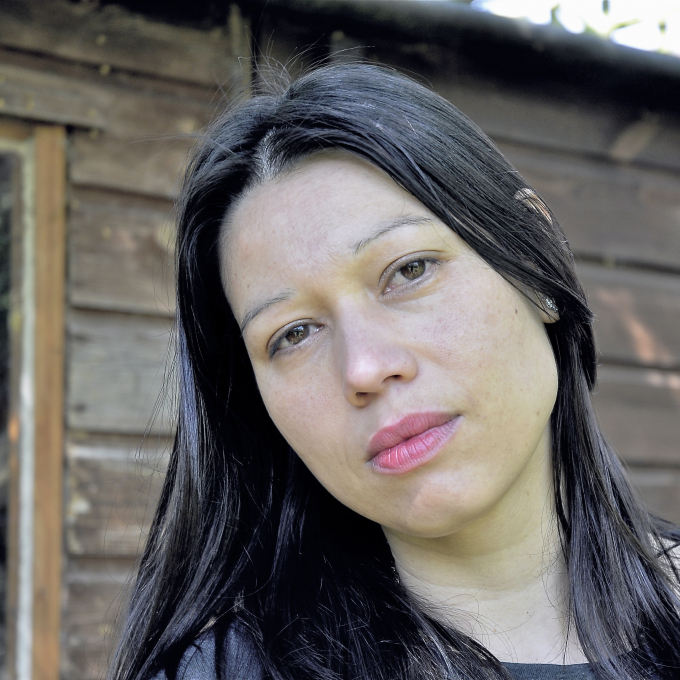 Francesca Beard was born in Malaysia and lives in London.

She has been described as "spine-tingling" (Independent) and "The Queen of British Performance Poetry" (Metro), and has performed and run workshops for the British Council all over the world. Her one-woman show, Chinese Whispers, produced by leading performance poetry organisation, Apples and Snakes, toured the UK and internationally from 2003 through to 2007. In 2007, she was on attachment to the Royal Court Theatre as one of the UK’s most promising writers. She is currently working on storyverse, an interactive format for live and on-line participants with B3 Media, supported by Arts Council England, developed through residencies with Banff Centre, Canada and the Mixed Reality Lab, Nottingham University.

Her work appears in various magazines and anthologies, including Oral (2001), Dazed and Confused Annual (2001) and Short Fuse (2002). Her first radio play, The Healing Pool, was broadcast on BBC Radio 4 in 2005. Her self-published collection, Cheap, is now in its fourth imprint.

She has been Poet-in-Residence at institutions such as Hampton Court Palace, the Tower of London, the Natural History Museum, BBC White City and the Metropolitan Police. She works regularly with the Barbican Education Department as well as for the National Theatre, Hampstead Theatre and the Round House.

She brings her work into schools across London and the UK and recently toured Animal Olympics, a family show about the Chinese Horoscope animals. To find out more, please visit her website as below.

Although Francesca Beard began on a somewhat conventional note, by studying literature at Cambridge, she has since seemed at home in the strangest and most varied of venues: from Danish comedy festivals to Australian jazz clubs and Colombian prisons. Since 1999, Beard has been an indefatigable promoter and performer of live poetry, and has toured much of Europe, Asia and South America with the British Council, running workshops and classes in Russia, Malaysia (where she was born), the Philippines, Vietnam, Thailand, as well as Germany, the Czech Republic and Poland. Though there is still a much-marked divide between 'page' poetry and 'performance' poetry, the latter has certainly picked up in terms of exposure over the past decade, particularly in London, where an increasing number of venues devote themselves to showcasing new talent in the field. Beard has long been associated with Apples and Snakes, with whom many of London's performance poets made their debuts.

In 2001, Beard participated in Apples and Snakes' Bus Jam, an arts access project which took place on London buses. Taking her work abroad, Beard won the International Slam at the Biennale in Turin in 2002. With heavy reliance on repetition and rhyme, her work has been described as "spine-tingling" – in regards to her poem 'Rehabilitation': "a lament to a friend who used to be wittily, if narcotically inspired until he underwent... sardonic irrigation... All your bitterness was washed away with rehabilitation" (Charlotte Fane, the Independent, 25 March 1998). 'Old Love' is a fine example of how her work resonates both on and off the stage:

"In the glance of a mirror, I saw a timid shape / standing in the bevelled bit, / the thin prismatic strip on the edge of the frame /and thought it was a ghost of you.

What are you doing here? / You can’t just appear, without warning, / like we were used to it being. / You seemed blurry, like the first and the last time. / In between, how huge you were. / The shadow you cast let much sleep beneath its shade. / You wavered in the air, vanishing. / How I wanted to hold out my hand, / so that your sad ghost / could crawl into a friendly cradle. / Of course it was nothing—a trick of the light / and a splinter in the eye / of a hair gummed across the heart.

No, you are frozen where you were that last time, / deaf and dumb, / a wax-work in the pin-hole museum, / while your tiny, passionate soul, / marooned in the middle of nowhere, / cries and stretches out its arms.

Meanwhile, on my own rock, / on the other side of the world, / I think of you, blind and stumbling in the dark, / while the rescuers throw the beams of their torches / into the wrong cave."

Although prolific in various genres and always keen on a multi-disciplinary approach, Beard is perhaps better known for her one-woman shows, such as Chinese Whispers (2003), which was produced by Apples and Snakes and was a success with public and critics alike. Exploring identity, language and using much biographical material from Beard's own life, the show was awarded a Development Grant from London Arts and received the Tap Water Award for Best Performer at the Edinburgh Fringe in 2003. Chinese Whispers has toured both in Britain and abroad, including Malaysia, Madrid in 2006 and Portugal in 2008.

2003 also saw Beard attend the International Poetry Festival in Medellín, Colombia, as a guest of the British Council. Her first radio play, the 45 minute The Healing Pool, was broadcast on Radio 4 in May 2005 as part of its Stages of Sound project and later featured at London Live. Later that year, Beard wrote some poems for the Barbican's Can I have a Word?. In 2006, she was on retainer with the Royal Court Theatre and one of her short plays was nominated for a 2006 South Bank award. In 2008, Beard performed her Animal Olympics at Imagine: the Children's Literature Festival at the South Bank Centre. Collaborating with the Chinese Arts Centre as well as Soho Theatre, Beard used poetry, folk stories and improvisational techniques with puppets to design an hour-long show around the animal characters of the Chinese Horoscope – who are made to compete in their own Olympics. The story revolves around the Jade Princess, May Yee, who challenges a group of animals to race across a river: the order in which the animals finish then becoming their places in the horoscope's calendar. Thus told, the show vividly explains to the audience why and how the horoscope was assembled, illustrating, for instance, why although animals such as the rat, ox or tiger are present, cats are not. Assembling all the animals on stage, Beard displays a surreal sense of humour: her pig is French, the dog practices yoga and the ox is into hip-hop. Using her experiences from recent visits to the Far East, Beard utilised a cast of fellow poets and writers who donned animal costumes, helping her bring her show to life. In an interview with Charlotte Cripps, Beard commented on her unique approach:

"Performance poetry is so much about audience. It is a very interactive art form. It always has an improvisational quality to it, and the audience should play a role in every performance. There's an X Factor quality to my show as the audience vote for their favourite characters. It explores the nature of competition: winners and losers. This is an issue that children have to learn to deal with." (C. Cripps, the Independent, Wednesday, 16 January 2008.)

Animal Olympics was also performed at the Edinburgh Fringe. Over the years, Beard has been a writer-in-residence at the Metropolitan Police, the Tower of London and Hampton Court Palace, and has conducted workshops for the National Theatre, the British Library, the Barbican and the Natural History Museum. Her work has also been published in Oral (Hodder & Stoughton, 2001), the Dazed and Confused Annual (2001), Short Fuse (Rattapallax, 2002) and various other anthologies and magazines. Her self-published chapbook, Cheap, is now in its fourth imprint.

@FrancescaBeard In ancient times, Hundreds of years before the dawn of history Lived a strange race of people, the Druids No one kn… https://t.co/qJZbAilubn
(1 months ago)