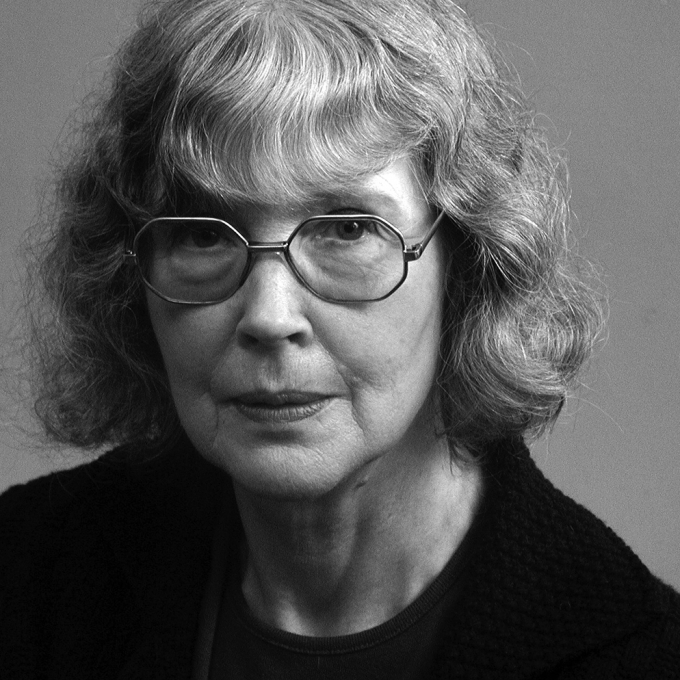 Poet Fleur Adcock was born in Auckland, New Zealand, on 10 February 1934, but spent much of her childhood, including the war years, in England.

She studied Classics at Victoria University in Wellington and taught at the University of Otago, moving to London in 1963 where she worked as a librarian at the Foreign and Commonwealth Office. She has held various literary fellowships, including a period at the Charlotte Mason College of Education, Ambleside (1977-78). Later she held the Northern Arts Fellowship at the Universities of Newcastle upon Tyne and Durham (1979-81), where she met the composer Gillian Whitehead with whom she collaborated on a song cycle libretto and later a full-length opera about Eleanor of Aquitaine. In 1984 she was Writing Fellow at the University of East Anglia. She has been writing full-time since 1981.Her poetry has received numerous awards, many of them from her native New Zealand, and she won a Cholmondeley Award in 1976. She was awarded an OBE in 1996.

A collected edition of Fleur Adcock's poetry, Poems 1960-2000, was published in 2000, and she is a regular contributor to, as well as editor and translator of, poetry anthologies. She was awarded the Queen's Medal for Poetry in 2006, and in 2008 was named Companion of the New Zealand Order of Merit for services to literature.

Her latest poetry collection is Hoard (2017).

'Things’, a brief ode to insomnia from The Inner Harbour (1979), appears in a collection whose main theme is the author’s return visit to her native New Zealand.

In its six lines, all the more haunting for being entirely enigmatic, we learn that "There are worse things than having behaved foolishly in public". What is keeping the speaker awake are thoughts of "miniature betrayals, / committed or endured or suspected". Finally, "It is 5 a.m. All the worse things come stalking in / and stand icily about the bed looking worse and worse and worse." And another poem in the book wonders, "By going back to look, after thirteen years, / have I made myself for the first time an exile?" A sense of geographical and emotional displacement, with a consequent search for identity, seems essential to Fleur Adcock’s poetry. Dialogue between Britain and New Zealand is at work throughout; memory and family history continually negotiate. Well-known for her sardonic view of personal relationships – both of lovers and family members - her subsequent interests in family history and the lives of her ancestors may well stem from this.

As editor, Adcock’s Faber Book of 20th Century Women’s Poetry (1987) naturally throws a revealing light on her own poetic tastes. In it, she rejects the view that "to write truly as a woman one must reject literary traditions merely because they were largely formed by men". Indeed, Adcock’s first poetic contacts in London were with the largely male poets of ‘The Group’, such as Anthony Thwaite, Peter Porter, and George Macbeth. Sylvia Plath looms largest in the anthology yet, as Adcock has elsewhere admitted, she "wasn’t any kind of model for me". The calm lucidity of Adcock’s manner may instead owe something to the American poet Marianne Moore, whose "analytical temperament" she singles out in her anthology. (It includes Moore’s poem ‘The Pangolin’, while Adcock’s poem with the same title invites the creature "to be dreamt about, if he would care for it"). Her introduction states that she is "not propounding a thesis or view" of women’s poetry but wanting to remedy a situation of it being undervalued. She dismisses what she calls "primal screams" or "cryptic minimalists". What Adcock admires is "wit … [that] in good poets does not conflict with seriousness and humanity".

The critic Edna Longley, writing in her own Bloodaxe anthology of 20th Century Poetry (2000), has pointed out Adcock’s "sense of being ‘outside’, her knowledge of Classical poetry and wide-ranging alertness to other poetic traditions". Adcock began in New Zealand as a student and teacher of the Classics, and this has influenced her views of personal relations, sex and affairs. Among her early poems is a ‘Note on Propertius’, and a Catullus-like ‘Advice to a Discarded Lover’, which compares him to a dead bird: "In you / I see maggots close to the surface. / You are eaten-up by self-pity, / crawling with unlovable pathos". This anti-romantic strain has certainly produced some of her best-known poems, such as ‘Against Coupling’: "There is much to be said for abandoning / this no longer novel exercise … / when / one feels like the lady in Leeds who / had seen the Sound of Music eighty-six times".

Over the years, her poetic manner has generally moved from the formal to a looser conversational mode. In keeping with this has come a much warmer vein, especially in writing about her family, divided as they are between countries and cultures. The Incident Book (1986) contains some of her most quietly moving poems. ‘The Chiffonier’, for instance, about a piece of furniture promised by her "dear little Mother", becomes a meditation on mortality and a re-assessment of their relationship, and concludes "I have to write this now, while you’re still here: / I want my mother, not her chiffonier". She now writes about being a grandmother herself (‘Tadpoles’), able to sympathise with a wayward niece (‘For Heidi with Blue Hair’). Other poems return to her wartime childhood self in England, with her little sister - the novelist Marilyn Duckworth. Only in ‘Excavations’ do we find a bitter note. In this sardonic fantasy, the speaker finds the previous men in her life buried in holes and covered up with earth. In one, there are the "pretty bastards" who didn’t love her; in another, "the men whom I stopped loving", who are "cuddled up with their subsequent ladies".

In Time-Zones (1991) there are more poems on her family; recalling the birth of a son ("You lie there, bleeding gratefully. / You’ve won the Nobel Prize, and the VC") and searching for the birth-place of her father in Manchester, after getting news of his death (‘My Father’). In another kind of hospital analogy, she calls on "Clear-eyed literature, diagnostician" to "be our nurse and our paramedic". ‘Romania’ is a non-cynical, even excited hailing of the 1989 overthrow of the regime, reminding us of Adcock’s involvements in that country and her translations of Grete Tartler’s poetry. By contrast, ‘Smokers for Celibacy’ is a jaunty audience-pleasing comic diatribe: "if you want to avoid turning into physical wrecks / what you should give up is not smoking but sex".

In an interview Adcock gave to The Guardian (with Sally Vincent, 29 July 2000), to mark the publication of her Poems 1960-2000 (2000), she observed that "Ancestors and poetry and religion are the same. All about wonder. Having a sense of wonder". Her previous collection, Looking Back (1997), makes family history its subject. By imagining the lives of her ancestors, and giving voice to them, she draws a logical conclusion to her own search for identity. Most are excavated from Victorian Britain, such as ‘Amelia’, who turned to gin after continual child-bearing: "Wouldn’t you? / By the time it killed me I’d five living". In ‘A Haunting’, the dialogue with a ghost leads to his disturbing demand for a kiss: "Is it compulsory, I wonder, / to like one’s ancestors?" With ‘Swings and Roundabouts’ she imagines them "creeping down from the north": "They’re using the motorways; they’re driving south/ in their armour or their ruffs and doublets". Eventually, it concludes, they’ll run into her: "they’ll meet me riding my bike with Lizzie Wood / when I was twelve; they’ll rush right through me / and blow the lot of us back to Domesday".

A group of new poems concludes Poems 1960-2000, inspired by her residency at Kensington Gardens. The final one says: "Goodbye, summer" and ends on a quietly valedictory note: "The gates close early. What wanted to be said is said". Fleur Adcock’s apparent farewell to poetry is surely only a gesture. Her witty views of the human comedy, stretching all the way from the UK to New Zealand, retain their appeal.