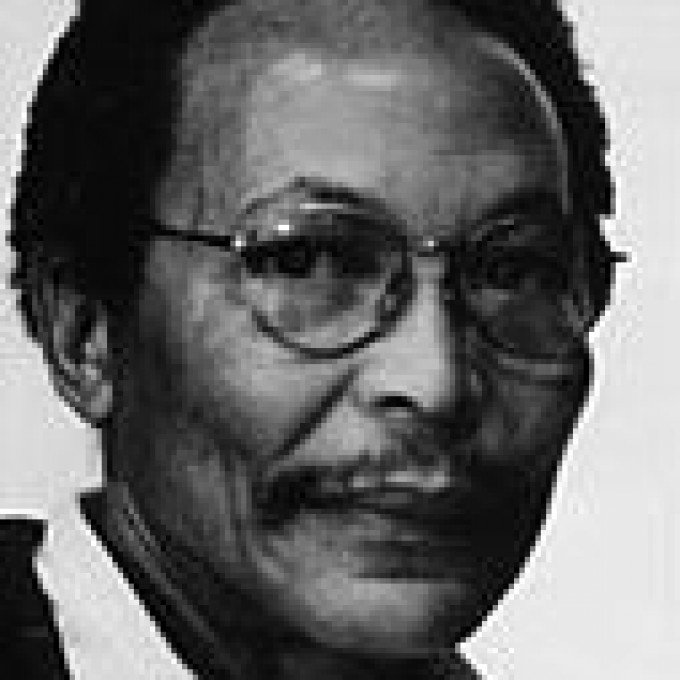 Novelist, playwright and short-story writer Earl Lovelace was born in Toco, Trinidad in 1935 and grew up in Tobago. He worked for the Trinidad Guardian, then for the Department of Forestry and later as an agricultural assistant for the Department of Agriculture, gaining an intimate knowledge of rural Trinidad that has informed much of his fiction.

He studied in the United States at Howard University, Washington (1966-7) and received his MA in English from Johns Hopkins University in 1974. In 1980 he was awarded a Guggenheim Fellowship and spent that year at the University of Iowa. After teaching at a number of other American universities, Lovelace returned to Trinidad in 1982, where he now lives and writes, teaching at the University of the West Indies. A collection of his plays, Jestina's Calypso and Other Plays, was published in 1984.

His first novel, While Gods Are Falling, was published in 1965 and won the British Petroleum Independence Literary Award. It was followed by The Schoolmaster (1968), about the impact of the arrival of a new teacher in a remote community. His third novel, The Dragon Can't Dance (1979), regarded by many critics as his best work, describes the rejuvenating effects of carnival on the inhabitants of a slum on the outskirts of Port of Spain. In The Wine of Astonishment (1982) he examines popular religion through the story of a member of the Baptist Church in a rural village. His novel, Salt, was published in 1996 and won the Commonwealth Writers Prize (Overall Winner, Best Book) in 1997. Set in Trinidad, the book explores the legacy of colonialism and slavery and the problems still faced by the country through the story of Alford George, a teacher turned politician.

His most recent novel Is Just a Movie (2012) was the winner of the 2012 OCM Bocas Prize for Caribbean Literature.

Unlike an earlier generation of distinguished Caribbean writers who began publishing in the 1950s and migrated to London, Earl Lovelace was born in Trinidad in 1935 and has remained there.

His decision to live and work at home and to write in a popular idiom which derives from an indigenous calypsonian and carnivalesque tradition, is a feature which marks all of his published work. Like C. L. R. James and Sam Selvon before him, Earl Lovelace's work positions itself firmly amongst the lives and voices of ordinary people whether the focus is on the poverty-stricken 'yard' culture of Port of Spain or the religious shouter traditions of the rural population. As is apparent in early novels such as While Gods Are Falling (1965) or The Schoolmaster (1968), Lovelace's work has demonstrated from the outset an unwavering commitment to explore the complex political tensions at work in an island culture that has been born out of a history of slavery and indenture, to examine the 'pitfalls', as Frantz Fanon once famously put it, 'of a national consciousness'. His fictional world is not of course without its contradictions; nor, indeed is his portrait of a newly independent society caught in the throes of resistance, revolution and acquiescence, a simplistic one. Yet his message is clear and it is an imaginative vision he has consistently sustained in different genres: ranging from his early fiction to his dramatic works such as Jestina's Calypso (1984) as well as in the panoramic historical range of his award-winning novel, Salt (1996).

In a talk delivered in 1983 at the University of Kent and published as the inaugural editorial of the literary magazine Wasafiri, Lovelace reflected on the difficulties for a writer such as himself of negotiating a present in Trinidad still bound (despite Independence) by the lingering hangover of colonialism. Stressing the need to build a future in the present alongside the contradictions of the past, Lovelace highlighted above all the need to cut through the rhetorical masks of an easy nationalism, the replaying in different forms of what he calls a predictable victor-victim syndrome. As he said, 'We ... have to get rid of these postures, comforting as they may seem, for whether it is as supervisor of civilisation or as victim of oppression, both prevent us from the far more exciting and essential task of building ... a new and human society. We can only do this from where we are....Nobody is born into the world. Everyone of us is born into a place in the world, in a culture, and it is from the standpoint of that culture that we contribute to the world.'

Lovelace's desire to write his characters into history, a black history built originally on 'enslavement' and 'indenture' is one driven primarily by a need to rebuild a positive sense of identity in the Caribbean, a process he prefers to call the full acknowledgement of a sense of 'personhood' and through which each individual whatever their social, cultural or racial status can 'search as it were for his [or her] integrity'. For as we see at the opening to one of his most impressive novels, The Dragon Can't Dance (1979), a book which examines the mythical and ritualistic elements of Carnival as it is experienced and lived by the bleak lives of the inhabitants of 'Calvary Hill' in Port of Spain, small acts of resistance however difficult can provide the means to personal and social liberation.

In The Dragon Can't Dance Lovelace uses the theatrical and political devices of Carnival and calypso to explore the inner lives of the inhabitants of 'Calvary Hill'. Set around the period of Eric Williams' rise to power, the novel simultaneously charts an important seven years in Trinidadian political history. The tensions amidst the small community Lovelace focuses on in the novel as they prepare for Carnival and expose the realities underlying masquerades of their daily lives becomes a microcosm for a much broader social and political message. Despite the fact that we are shown in different ways that 'All o' we is one', such ideals are not easy to achieve amongst a slum community driven by competing self-interests, a history of poverty and destitution combined with a nihilistic vision that seems only briefly to be alleviated by the annual cycle of preparations for Carnival, a ritual that has over time been emptied out of its political potency. Parodying the symbolic sacrifice of the Christian Crucifixion and the optimism of the Redemption, Lovelace demonstrates the pains for this community of moving beyond the comfortable and transient masks of play-acting in a search for a 'personhood' which has the potentiality to unite and redeem rather than dissipate. Carnival acts both as a means towards resistance and as a form of escapism. As Lovelace tells us: 'Once upon a time the entire Carnival was expressions of rebellion. Once there were stickfighters who assembled each year to keep alive in battles between themselves the practice of a warriorhood born in them; and there were devils, black men who blackened themselves further with black grease to make of their very blackness a menace, a threat'. Yet all we are left with is a diluted form of this rebellion in the character of Aldrick Prospect [note name] whose costume remade every year carries pieces of this history. Moreover, whatever the force of the figure of Aldrick as metaphorical dragon in the novel, dancing the dance of history, the community it seems is still not redeemed. Whilst we are invited to remember one of his rousing speeches: 'Make no peace with slavery ....We have to live as people, people. We have to rise. Rise up, up'. We are also shown the difficulties of upholding such a position in a world where corruption constantly undermines: 'But how do you rise up when your brothers are making peace for a few dollars?'.

Whilst The Dragon Can't Dance is set in Port of Spain, many of its characters are migrants from the rural areas, unsettled and dislocated in the slums of Calvary Hill. Moreover, Lovelace has maintained a vision that is committed both to the rural and the urban creating a fictional lens that attempts to embrace the whole of his society. We see this in many of his plays but also in his twelve sketches in A Brief Conversation (1988) as well as most recently in his 1997 novel which was the winner of the Commonwealth Writer's Prize, Salt. As one critic has observed 'salt' is a potent symbol in the novel for the Middle Passage, the sweat of slave labour, 'the "salary"[Latin for salt] of indentured labour, and the human integrity by which the descendants of slaves become the "salt" of the earth'(Louis James). In creating a panoramic portrait of the Caribbean's history in this novel, Lovelace does not detract from a personal vision and characteristically focuses on the lives of two very different individuals and the intimate details of their search for 'personhood'. As with The Dragon Can't Dance, there is no easy solution or resolution to defining the collective needs of modern Trinidadian society, a society that like his character, Alford, may have some of its spiritual roots in an African past but nevertheless has to remake that history within the context of a national identity that is equally Indian, Chinese and European. And as the novel reaches its climax in a political celebration for Independence Day, Lovelace provides us (through the eyes of Florence) with a complex vision once more not of violence or simple-minded political resistance but of compassion and humility: '...I saw it clearly. The tragedy of our time is to have lost the ability to feel loss, the inability of power to rise to its responsibility for human decency....I was thinking that if what distinguishes us as humans is our stupidity, what may redeem us is our grace'.

Earl Lovelace has been the recipient of many prizes and awards for his fiction and plays including The Independence Literary Award, Pegasus Literary Award, Chaconia Medal and The Commonwealth Writer's Prize.