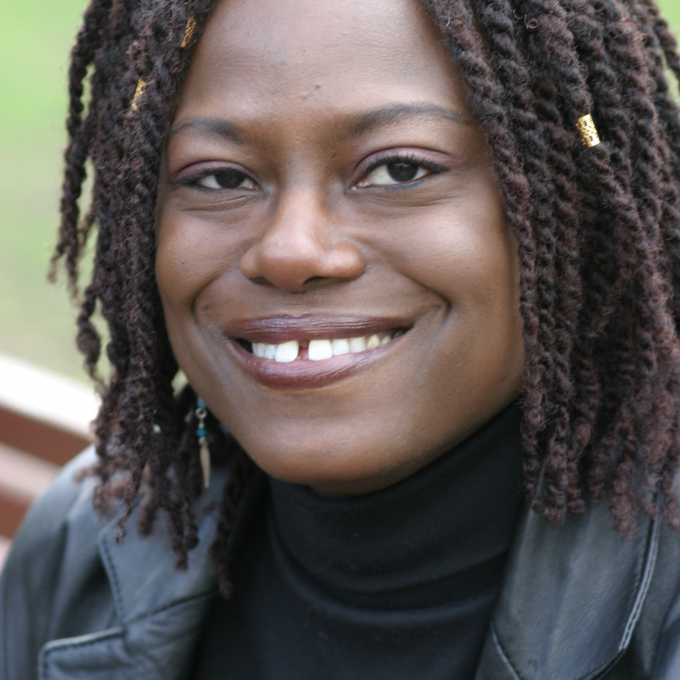 The novelist Dreda Say Mitchell was born in 1965 and was the recipient of the Crime Writers’ Association John Creasey Dagger in 2005, the first time a black British writer received this honour.

Dreda Say Mitchell is an award-winning novelist, broadcaster, campaigner, journalist and motivational speaker. She is the author of ten novels, with her debut Running Hot awarded the Crime Writers’ Association’s John Creasey Dagger in 2005. Subsequently, Mitchell was named one of ‘Britain’s 50 Remarkable Women’ by Lady Geek in association with Nokia. She has been a World Book Night author and has contributed to the multi-award-winning crime fiction guide Books To Die For. She is a frequent guest on television, with appearances on The Papers, the BBC News Channel, The Review Show, Newsnight, Daybreak, Canada’s Sun News Live, Eggheads and Celebrity Pointless. She has presented Radio 4’s Open Book and has been a guest on many radio shows, including Front Row, Saturday Review and Woman’s Hour. On Friday nights Mitchell can regularly be found reviewing the newspapers on The Stephen Nolan Show. She was the 2011 Chair of the Harrogate Crime Fiction Festival, Europe’s most prestigious crime fiction festival. Her commitment and passion for raising the life chances of working-class children and her work in prisons and secure settings for young people has been called inspirational and life-changing.

She grew up on a tough council estate in the heart of London’s East End. Her parents migrated to Britain from the Caribbean in the 1960s; her father was a factory worker and her mother a cleaner at Mile End hospital. Although both her parents left school before they were sixteen, they made sure that she and her siblings visited Whitechapel library, and she has pointed out that this is where her love affair with books started. Some of the people she grew up with drifted into crime and the fringes of the underworld and it is this personal experience -- and the changing nature of her city, London -- that she writes about. She does this in an honest and authentic way, without sentimentality.

Mitchell travelled from East London to West to study for a degree in African History at SOAS, University of London and then walked across the road to the Institute of Education to take a PGCE. And so began her life as, first, a secondary school teacher and then as a teacher in primary schools. She became a deputy head teacher and then went on to work as a consultant in a variety of different London local authorities. She continues to work as a freelance education consultant, which includes working in prisons and young offenders institutes, and has an MA in Education Studies. A guest appearance on Woman’s Hour had many listeners remarking how inspirational her life story and journey were. She continues to live and write in the East End.

A variety of accolades, from ‘edgy’ to ‘original’, have been lavished on Dreda Say Mitchell’s highly individual brand of urban noir, with its distinctive black orientation. Her earlier books utilised a vividly drawn London underworld as a setting, with the police being largely offstage in her work. She made her debut on the crime writing scene in 2004 with her first novel Running Hot, the inaugural book in a trilogy about three working-class characters who live on a fictitious housing estate in East London. The book gleaned a slew of enthusiastic reviews, reached a wide readership and was awarded (as mentioned earlier) the CWA’s John Creasey Memorial Dagger, a seal of approval that quickly established Mitchell as a writer who deserved attention. The protagonist of that book, Elijah “Schoolboy” Campbell, a small-time drug dealer, makes a decision he knows will be hard to realise: he wants to escape from the underworld of petty criminality that has been his milieu, and make something of his life outside the world of his dangerous cohorts. The novel – using the accoutrements of the chase thriller - perfectly illustrated Mitchell’s ability to adopt the crime genre as a springboard for exploring key contemporary social issues, something that motivated her both as a novelist and as a social commentator. “Schoolboy” Campbell is a victim of the disadvantaged background he is struggling to escape from, and in many respects he represents the lives of some of the young men Mitchell grew up with on the harsh East End housing estate, and with whom she spent much time talking about their blighted lives.

Her second novel, Killer Tune (2007), takes a different direction and had the notable effect of widening appreciation of Mitchell’s work. It is much more epic in scope; the ambitious narrative shifts between a strikingly drawn contemporary London and the capital as it was in 1976. Once again, Mitchell takes the crime novel into an area not customarily explored by her peers, addressing issues of radical politics and the police’s uneasy relationship with the black community. The structure of the book is unusual, eschewing strict narrative chronology.

The title of the author’s third book, Geezer Girls (2009), suggested a move into the ‘Cockney crime’ genre of such bestselling writers as Martina Cole, and though there was change of emphasis in this direction (not least on the part of her publisher), Mitchell nevertheless maintained her individual approach with its focus on social values and lives lived on the edge of society. She once again revisits characters on her fictitious estate in East London: Jackie Jarvis, idiomatically drawn, is central here, the fearless matriarch of a housing block. The narrative involves four rebellious fifteen-year-old girls who end up in the care system and find themselves forced to work for a well-known underworld ‘Face’. The final effect of the book, despite the possibly bleak fates of the characters, is essentially life-affirming: Mitchell is (as ever) concerned with the indefatigable nature of the human spirit.

Geezer Girls demonstrated that criminal women had moved centre stage in Mitchell’s ‘Gangland Girls’ series – less engaged writing, perhaps, than her earlier books, but still packing a considerable punch. A year later, Gangster Girl parlayed elements from its predecessor into a novel that eschewed probability but possessed a narrative drive that swept all before it. And in this book, Mitchell utilised a tactic that had proved very successful for the American writer James Patterson: the canny use of cliffhangers at the end of each chapter to keep the reader hooked. Stacey Solomon is a solicitor who takes on clients from the gangster world and has earned herself the nickname ‘Got Off Daisy’. She knows this world intimately, as she is the daughter of a gangster father, and the multiracial milieu in which she moves is given strong verisimilitude, despite the implausibilities of the plot. Stacey is to discover a secret deposit box that reveals destabilizing secrets in her own past. She appears to be the daughter of Madame Stella, a brothel keeper of immense business acumen. And Stella’s brother is a brutal sadist with an ever accelerating body count to his (dis)credit. The essence of the book is Stacey's search for her birth mother, and the parade of characters she encounters may be larger than life, but they have a liveliness that keeps us comprehensively gripped. Stacey, too, is a richly drawn character, with a marked melancholy a key component of her increasingly desperate search.

A significant book in Mitchell’s career appeared in 2015: Death Trap. The key innovation here lay in the fact that this was the first time a black, female police woman starred as the lead character in a British crime novel. The book, however, did not initiate a trend in this regard, and it remains a lonely example of its newly minted genre.

Blood Sister (2016, the first of a trilogy), however, was more firmly in the aforementioned Martina Cole territory: tough East End-set crime fiction with strong, uncompromising women at its centre. In terms of her own pre-writing life, Mitchell has noted that there were three career options for youngsters in the East End when she was growing up: sport, music or crime. But she, of course, discovered a fourth: writing about it. That, however, is not an option for her characters here. Readers are familiar with Cockney criminals (either robbing banks or dealing in drugs), but Mitchell’s subject here is, as suggested above, the women: some are forced into prostitution while others try to cope with violent abuse from their male partners. Some, however, become canny and resilient enough to take on this harsh world on their own terms -- as with the three generations of women Mitchell writes about who live on ‘The Devil’s Estate’. We meet two sisters, one of whom, the uncompromising Tiff, opts for a life of crime and corruption, while the other, Jen, strives for a different, better way of living. And the sisters have to reckon with another formidable woman on the estate, the ambitious Dee. This is strong and provocative writing, and comparisons will be drawn not just to Martina Cole, but to such writers as Kimberley Chambers and Mandasue Heller. But Mitchell is incontrovertibly her own woman. While she foregrounds the actions of her aspirant heroines in the straightforward fashion of the East End women's crime novel, she also nails their psychology, freighting in layers that propel the book out of its crowded genre into the realms of something more thought-provoking and complex – as with all her work.