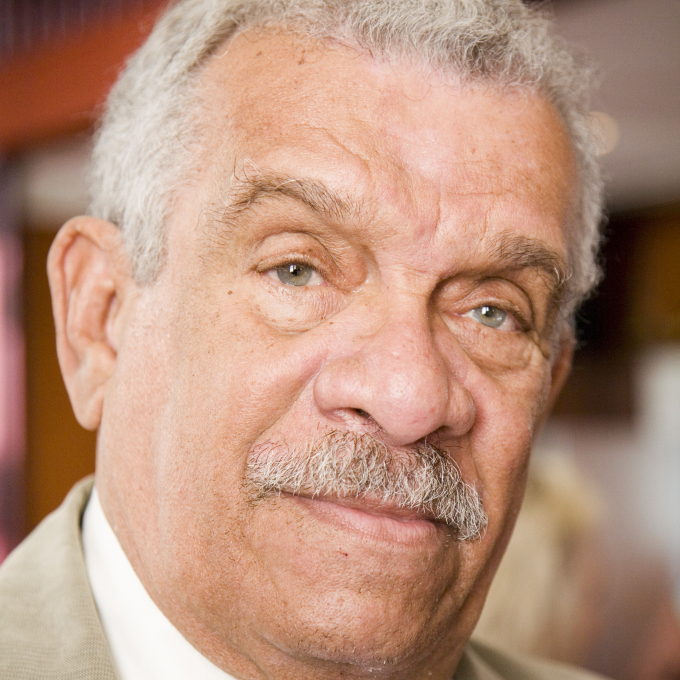 Derek Walcott won the Nobel Prize for Literature in 1992. He died in March 2017.

Born in St Lucia in 1930, he studied at the University College of the West Indies in Kingston, Jamaica. He moved to Trinidad in 1953, became a theatre and art critic, and taught in schools in the Caribbean until 1957, then becoming a journalist. He founded the Trinidad Theatre Workshop in 1959, and has since divided his time between Trinidad and the US, where he teaches Literature and Creative Writing at Boston University. His experience of the Caribbean and of living between two cultures has strongly influenced his work.

Derek Walcott had his first play performed in 1950. His collection of poems In a Green Night: Poems 1948-1960 (1962), celebrating the Caribbean, brought him to public attention. Since then many other poetry collections have been published. In The Gulf and Other Poems (1969) and The Castaway and Other Poems (1965) he explores his feelings of conflict and isolation, caught between European culture and the black folk culture of his native Caribbean. In Omeros (1990), an epic poem and his most ambitious work, he invokes the lives and voices of the people of the Caribbean through Greek myth and epic, drawing on Homer's Iliad and Odyssey. The book won the WH Smith Literary Award in 1990. Walcott's own version of the Odyssey, The Odyssey: A Stage Version (1993), which shares the Homeric/Caribbean background of Omeros, is the result of a commission by the RSC. His Collected Poems 1948-1984 were published in 1986, and his collection, The Prodigal, in 2005. A Selected Poems was published in 2007.

Derek Walcott is an honorary member of the American Academy and the Institute of Arts and Letters. In 2009 he was appointed Professor of Poetry at the University of Essex. His poetry collection White Egrets (2010) won the 2010 T. S. Eliot Prize.

Scale has been a prominent feature of Walcott’s poetry since Another Life (1973); his later career has seen a succession of major projects – Omeros (1990), Tiepolo’s Hound (2000) and The Prodigal (2005). His work is conceived on an oceanic scale and one of its fundamental concerns is to give an account of the simultaneous unity and division created by the ocean and by human dealings with it.

An early poem, ‘A Sea-Chantey’ from In a Green Night: Poems 1948-1960 (1962), offers both a reverent appeasement of the waters and, in its litany of placenames, a declaration of love for the Caribbean world, bitter though its history may be:

'The litany of islands,
The rosary of archipelagoes,
Anguilla, Antigua,
Virgin of Guadeloupe,
And stone-white Grenada
Of sunlight and pigeons,
The amen of calm waters …'

The title of a poem from The Star-Apple Kingdom (1980 might sum up Walcott’s whole oeuvre: ‘The Sea is History’. A riposte to those who ask what monuments and artistic masterpieces can be boasted by those descended from slaves brought from Africa to the Caribbean, ‘The Sea is History’ discloses two interwoven themes in Walcott’s work – the exploitation of Africa and the New World by Europe; and the glory of European culture, which Walcott has learned not only to possess but also to amend:

'but where is your Renaissance?

Sir, it is locked in them sea-sands
out there past the reef’s moiling shelf,
where the men-o’-war floated down;

strop [sic] on these goggles, I’ll guide you there myself.
It’s all subtle and submarine,
through colonnades of coral,

past the gothic windows of sea-fans
to where the crusty grouper, onyx-eyed,
blinks, weighted by its jewels, like a bald queen …'

This underwater phantasmagoria recalls the uneasy dreams of Clarence in Richard III and of Richard II ; at moments, indeed, the poem exudes a kind of amiable, teasing menace, as though to remind the questioner of the fate of those aristocrats. At the same time, Walcott’s characteristically luxuriant and visually exact language (he is also a painter) is creating the very history and literature which the questioner declares is not to be found. The poet of course, is not only the dramatist of the occasion but also both the speakers. The poem serves both as an affirmation and a beginning: it is  ‘the sound / like a rumour without any echo // of History, really beginning.’ The task of imagination is to animate and substantiate its mother, memory.

From his precocious beginning, Walcott has immersed himself in poetic tradition: the Jacobeans and Wordsworth are presiding presences; so too are Yeats and Lowell, as is Homer. Walcott’s embrace of these figures is a dramatic example of post-colonial aesthetics, an act of possession as sweeping in its way as the imperialism which went before it. Unlike his contemporary, Kamau Brathwaite, Walcott’s poems are written mostly in standard English ( the speaker of The Schooner Flight is an important exception), which has significant political as well as literary implications. A detractor might see it as a sign of defeat, but the thrust of Walcott’s writing indicates that he views himself as the true inheritor of tradition, one who will as T.S. Eliot suggested, alter tradition by adding to it, able to turn its powers to the task of reparation and accurate representation. There are obvious comparisons to be made with the work of Walcott’s fellow Nobel Laureate, Seamus Heaney, whose absorption in the tradition of English nature poetry, particularly Wordsworth, has been placed in the service of a distinctively Irish vision. The result, like Yeats’s argument with the self, is a productive friction; indeed, it might be argued that without such friction the poet is condemned to parochial status. Walcott is faithful to his origins while speaking to the world.

The fact that Walcott has worked with such freedom and assurance, absorbing many elements into his own distinctive practice, does not deny the difficulty of writing, to which he has referred as a prison. Nor does he attempt to disguise the continuing conflict in himself between the artistic impulse and knowledge of what has been done in the name of the civilization against whose artists he measures himself. This is no less the case now than 50 years ago. There is by no means a simple division of loyalties between the local and familiar on the one hand and the remote authority on the other: what Walcott registers is an anxiety hardly separable from the survival of the imagination itself. In The Prodigal (2005), a work of sober assessment and retrospection as well as lyric power, he asks whether he made the right choice:

'Is every noun: breakwater, headland, haze,
seen through a gauze of English, a bright scrim,
a mesh in which light now defines the wires
and not its natural language. Were your life and work
simply a good translation?'

Patrick Kavanagh’s line from ‘Epic’ states: ‘Gods make their own importance.’ In their absence, the task falls to poets. Walcott’s most ambitious work to date is Omeros, which re-tells Homeric legend in the Caribbean context, locating Homeric characters – Achille, Helen, Philoctete – among island fishermen, in an effort to touch every aspect of Caribbean experience. Running in parallel in Walcott’s writing is the concern with art itself - its meaning and importance and the nature of an artistic vocation. This preoccupation is characteristic of Walcott’s modernist predecessors, but the treatment of ‘the growth of the poet’s mind’, as in Tiepolo’s Hound, also calls to mind the Wordsworth of The Prelude, whose grounding theme was the authentic, shaping power of the home landscape. With The Prodigal, Walcott gives new emphasis to exile, including the far-travelled poet and teacher’s sense, in old age, that ‘frequent exile turns into treachery.’ The longing for home is part of a pattern of conflict, in that home is known most sharply through absence.

Formal diversity, sensual richness and a three-dimensional sense of argument are enduring features of Walcott’s work, as is a swagger of command which at times risks grandiloquence. Perhaps Walcott’s true masterpiece belongs to a slightly earlier date: ‘The Schooner Flight’ appeared in the 1979 volume, The Star-Apple Kingdom. The poem tells the story of the sailor Shabine’s return to the sea, opening with a passage whose understatement and enigmatic musical power are the work of a writer with no one to impress:

'In idle August, while the sea soft,
and leaves of brown islands stick to the rim
of  this Caribbean, I blow out the light
by the dreamless face of Maria Concepcion
to ship as a seaman on the schooner Flight.
Out in the yard turning grey in the dawn,
I stood like a stone and nothing else move
but the cold sea rippling like galvanize
and the nail holes of stars in the sky roof' 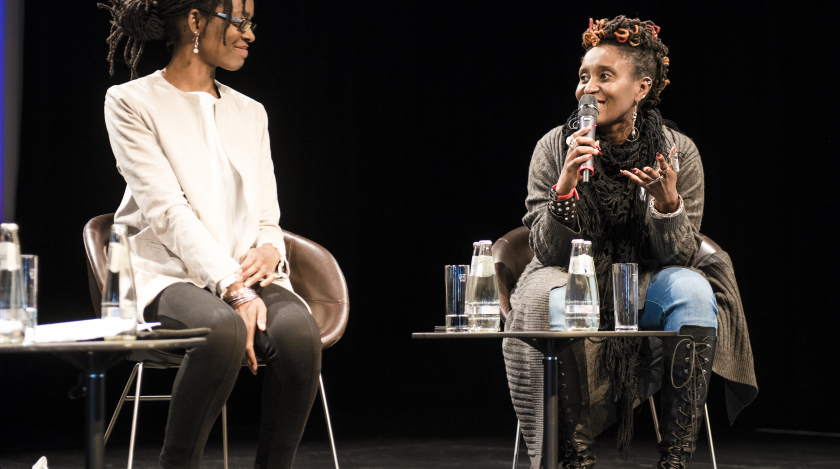