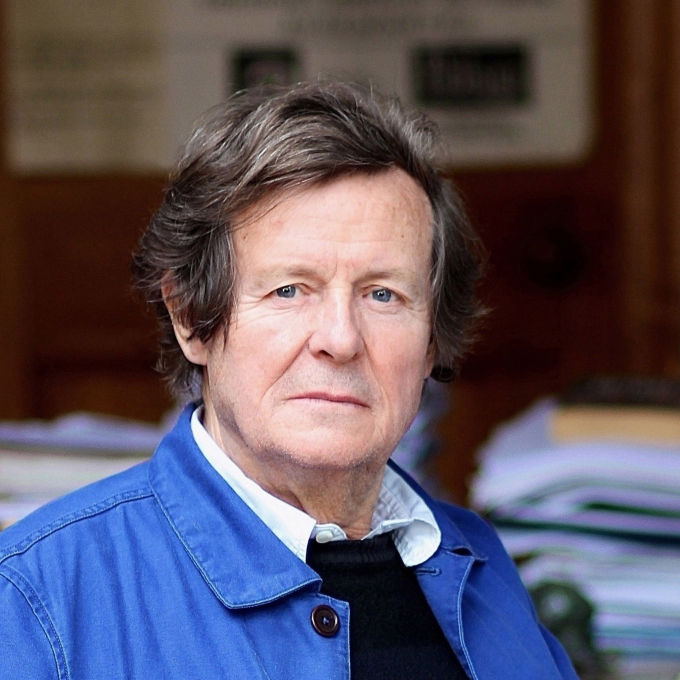 Playwright Sir David Hare was born in Bexhill, East Sussex, England on 5 June 1947, and was educated at Lancing College and Jesus College, Cambridge.

He co-founded Portable Theatre Company, acting, directing and writing plays. Slag was first produced in London in 1970 at the Hampstead Theatre Club. He was Resident Dramatist at the Royal Court Theatre in London in 1970-1 and Resident Dramatist at the Nottingham Playhouse in 1973. He co-founded Joint Stock Theatre Group with David Aukin and Max Stafford-Clark in 1975, and held a US/UK Bicentennial Fellowship in 1977. He has been Associate Director of the National Theatre since 1984. He was knighted in 1998 and is a Fellow of the Royal Society of Literature.

His plays include Knuckle (1974), winner of the Mail on Sunday/John Llewellyn Rhys Prize; Fanshen (1975), based on the book by William Hinton; Plenty (1978), a portrait of disillusionment in post-war Britain, first staged at the National Theatre in London; Pravda: A Fleet Street Comedy (1985), an attack on the English press written with Howard Brenton; The Secret Rapture (1988); the trilogy Racing Demon (1990), Murmuring Judges (1991) and The Absence of War (1993), about three British institutions: the Anglican church, the legal system and the Labour party; Skylight (1995); Amy's View (1997); and The Judas Kiss (1998).

He has also adapted Chekhov's Platonov and Ivanov, Schnitzler's La Ronde (The Blue Room) and Brecht's Mother Courage and Her Children for the theatre. In 1998 (and again in 2002) he performed his own play, Via Dolorosa, a monologue about a visit he made to Israel and the Palestinian Territories for the Royal Court Theatre. His experiences of acting and writing the play are further explored in a diary, Acting Up: A Diary, published in 1999.

More recent plays by David Hare include My Zinc Bed, first staged at the Royal Court Theatre, London, in September 2000, and The Breath of Life (2002). The Permanent Way (2003), the story of a political dream turned sour, explores the privatisation of British Rail, and opened at the Royal National Theatre in January 2004. His  play Stuff Happens (2005), waspremiered at the same theatre in 2005, and is about the invasion of Iraq. His most recent plays include The Power of Yes (2009), South Downs (2011) and The Moderate Soprano (2015).

His film work includes the screenplay for the screen adaptation of Plenty in 1985, and he wrote and directed the films Wetherby (1985), Paris by Night (1988) and Strapless (1989). He also wrote the screenplay for the film of The Corrections, based on the novel by Jonathan Franzen, which was released in 2007. His latest films are Page Eight (2011), Turks and Caicos (2014) and Salting the Battlefield (2014), all of which is both wrote and directed.

His book, Obedience, Struggle and Revolt (2005), is a collection of lectures about politics and art. His memoirThe Blue Touch Paper was published by Faber & Faber in 2015.

Sir David Hare lives in London. His papers were acquired by the Harry Ransom Humanities Research Center at The University of Texas at Austin in 1993.

David Hare, who arrived on the playwriting scene in the watershed year of 1968, is a dedicated social commentator.

His plays, in spite of occasional excursions into the Third World, offer a richly comprehensive portrait of contemporary Britain and its institutions. His range may be wider than that of John Osbourne, but like his mentor, he seems to view his native land with a mixture of critical exasperation and baffled affection: he is one of those writers who feels constantly obliged to take Britain's moral temperature through the chosen medium of drama.

Like most of his generation, Hare began by writing for the Fringe: indeed he co-founded Portable Theatre specifically to take plays to theatreless zones. But he made individual mark, first at Hampstead Theatre and then at the Royal Court, with Slag (1970): a coruscating satire in which three women set up an all-female boarding-school and, having rejected the traditional 'womanly' roles imposed by society, find themselves equally trapped in the opposite ones. While possessing a distinctive solo voice Hare was, however, happy to engage in collaborative or joint-authored ventures. England's Ireland (1972) was a group effort in which several writers joined forces to examine the history of British involvement in Northern Ireland. Brassneck (1973), co-written with Howard Brenton, was a much more successful venture that used three-generation family-saga to attack insidious provincial corruption and the naked hypocrisies of capitalism.

One of Hare's great gifts has always been to use popular forms for a political purpose. Knuckle (1974) explored the amorality of profit in the setting of ultra-respectable Guildford: the chosen vehicle, however, was that of the Chandleresque private-eye novel and boasted dialogue on the lines of 'That's a very nice leg' - 'I got another one just like it.' That was a fine example of Hare the stylist with a dazzling gift for pastiche. The other side of Hare, the self-denying collaborator simply concerned with telling a story, emerged in his adaptation for Joint Stock of William Hinton's book, Fanshen: an engrossing account of a group of Chinese peasants adjusting to change during the revolution from 1945 to 1949 and educating themselves in the transition from private to public ownership.

But increasingly Hare's work, both for stage, film and television, has been concerned with modern Britain and with society's apparent failure to live up to the idealism of the post-war period. Plenty (1978), the first of Hare's many plays written for the National Theatre, explored this theme through a heroine, Susan Traherne, who had experienced a 'good' war fighting with the French Resistance but whose life disintegrated in the ensuing peace. The play never fully resolves the question of how much Susan's breakdown is attributable to inherent instability and how much to social and political factors. But Hare creates a magnificent role - one of a long gallery of dominant female characters - and delineates post-war British life, from the high hopes of the Attlee government in 1945 to the national trauma of Suez in 1956, with great skill.

Hare's preoccupation with the state of the nation has informed much of his subsequent work. Pravda (1985), again co-written with Howard Brenton, was a big noisy public satire not simply on monopolistic media tycoons of the Rupert Murdoch variety but on the apparent collusion between the right-wing press and the Conservative government of Mrs Thatcher: hence the title's ironic allusion to the Soviet belief in the press as an organ of official 'truth'. In The Secret Rapture (1988) hare tackled the phenomenon of Thatcherism itself through a calculated contrast between a self-seeking, emotionally insulated junior government minister and her patient, caring long-suffering sister: what was little noticed, however, was Hare's suggestion that the traditional British virtues of tolerance and consideration will ultimately triumph. But easily Hare's most ambitious project was a trilogy examining the crumbling state of Britain's institutions apparently sustained only by individual dedication. Racing Demon (1990) was much the best and dealt with the Church of England's gradual transformation into a branch of social welfare. But Murmering Judges (1991) looked intelligently at the legal system and The Absence of War (1993) very sympathetically at the reasons for the Labour party's fourth consecutive electoral defeat. When played together, the trilogy offered a coherent vision of a society filled with ancient tribal rituals but lacking any core beliefs.

Part of Hare's achievement, however, has been to write plays that balance the personal with the political: one of the paradoxes that make him such a compelling writer is that he combines acerbic criticism with romantic optimism. The two sides of his personality successfully came together in Skylight (1995). The framework is an encounter between two former lovers: a rich and thriving Eighties restaurant owner and an idealistic woman teacher working in a disadvantaged East End school. Their reunion is a potent metaphor for two different, oppositional strands in British life; but the play's final gesture warmly endorses the resilience and faith of the idealistic teacher. Something similar happens in the equally popular Amy's View (1997) where Hare's heroine, a well-known English actress, overcomes the loss of both her wealth and her daughter through sheer professional determination: the play is a tribute both to the power of theatre and the survival of moral integrity in a deeply hostile environment. But, while preoccupied by Britain, Hare is anything but parochial. He has not only written successful adaptations of early Chekov plays such as Ivanov and Platonov. In Via Dolorosa (1998) he came up with a meditative and moving play, written to be performed by himself, based on a trip he made to Israel and the Palestinian territory. As an account of the confrontation of two intransigent communities and value-systems, the play was honest and fair. It transcended documentary theatre, however, by recording the impact on a peculiarly English liberal sensibility of a visit to a world where people were prepared to die for a cause in which they believed.

Over a period of thirty years Hare's plays naturally reveal changes of tone and style. What is utterly consistent, however, is his belief in the power of theatre as a medium and his unshakeable conviction that part of a writer's duty is to interpret the society in which he lives. Hare's plays naturally offer a portrait of his own divided temperament in which the romantic and the rebel are often at war. But collectively they also provide an authentic and remarkably well-sustained picture of the convulsions that have taken place in British life over the past half-century.