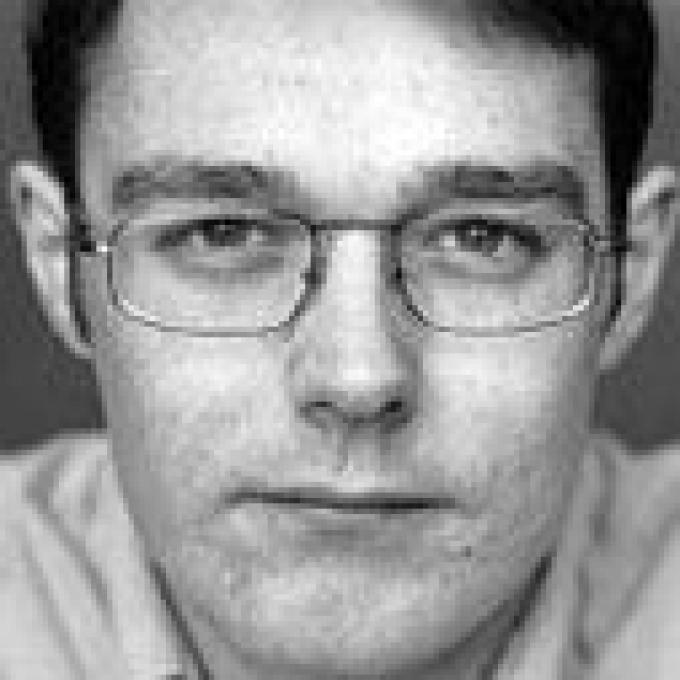 David Greig was born in Edinburgh in 1969 and brought up in Nigeria.

He studied drama at Bristol University and is now a well-known writer and director of plays.  He has been commissioned by the Royal Court, the National Theatre and the Royal Shakespeare Company and is currently Dramaturg of the National Theater of Scotland.

His first play was produced in Glasgow in 1992 and he has written many plays since, produced worldwide. In 1990 he co-founded Suspect Culture Theatre Group with Graham Eatough in Glasgow.

Further plays include The American Pilot (2005), about America's involvement in the Middle East and Eastern Europe; Pyrenees (2005) about a man who is found in the foothills of the Pyrenees, having lost his memory; and San Diego (2003), a journey through the American dream. These were followed by Gobbo, a modern- day fairytale; Herges Adverntures of Tintin, an adaptation; Yellow Moon: The Ballad of Leila and Lee (2006); and Damascus (2007).

David Greig's more recent works include two translations: of Euripedes' The Bacchae (2007); and of Strindberg's Creditors (2008). In 2010 his play Dunsinane, set in Scotland during the border wars with England, premiered at Hampstead Theatre with the Royal Shakespeare Company and his play, The Monster in the Hall (2011) was staged at the Traverse Theatre, Edinburgh as part of the Edinburgh Fringe Festival.

His recent play, The Strange Undoing of Prudencia Hart (2011) was first presented by the National Theatre of Scotland and toured in summer 2011. In 2012, his play The Letter of Last Resort, was performed at Tricycle Theatre, the final play of a ten-play cycle entitled The Bomb - A Partial History in Two Parts. In 2013 he wrote The Events, in which different local choirs perform the musical numbers every night.

David Greig has been described in the Daily Telegraph as 'one of the most interesting and adventurous British dramatists of his generation'. He is also one of Britain’s most prolific modern playwrights. But Greig’s work is as notable for its variety as its volume. His plays include adaptations and translations (Albert Camus’ Caligula, 2003; Euripedes’ The Bacchae, 2007; and Strindberg’s The Creditors, 2008), children’s plays (e.g. the award-winning Gobbo, 2006; and Herges Adventures of Tintin, 2005) and historical plays (e.g. Dunsinane, set in 11th-century Scotland). Noted for averaging almost five new plays per year, his output includes avant-garde, experimental pieces (see his work with ‘Suspect Culture’ below) as well as more frivolous, light-hearted productions that draw upon elements of the musical tradition (e.g. Midsummer: A Play with Songs, a romantic comedy set in Edinburgh, and co-produced with Gordon McIntyre (lyricist of Edinburgh indie band, Ballboy).

In the early 1990s, while he was still at Bristol University, Greig co-founded ‘Suspect Culture’ a Scotland-based project which, between 1993 and 2009, produced collaborative, and often groundbreaking theatre that received international acclaim. According to Greig, ‘Suspect Culture’ was:

'very much about … trying to anatomise our generation … Scottish drama up until that point had tended to be characterised by … a certain section of the population being both eulogised and anatomized … whether it would be the working class West Coast of Scotland or um, or the Kailyard or whatever. … with 'Suspect Culture', what we very much tried to do was not celebrate anybody actually. But simply try to describe our lives. And … our lives were … mixed up, globalised, latte drinking, or whatever it might be, all of these things which are, are clichés now, but at the time we were sort of trying to explore that, in drama.'

As Greig’s closing remarks above suggest, his work is particularly interested in questions of globalization and internationalisation and more precisely, how they impact at the level of the local and locale. This is a subject close to home for a playwright born in Edinburgh and brought up in Nigeria, a Scot without an accent who finds himself constantly being asked where he is from. Greig is a man who tries to avoid travel by plane on environmental grounds, despite growing international demand for his work.

However, Greig does not make a fetish of the local, or celebrate the local at the expense of the global; rather, he pursues the complex and often contradictory effects the two have on each other. For example, Outlying Islands (2002) is set on an isolated Scottish island in the late 1930s and concerns two Cambridge ornithologists, an Englishman and a Scotsman, cataloguing the local bird colonies. Even here though, the World War looms so that the island is less a remote retreat from international politics than a microcosmic space that illuminates many of its pivotal realities.

These preoccupations with location can be traced back to Greig’s earliest plays such as Europe (1994), which explores the themes of dislocation and belonging, estrangement and intimacy against the broader backdrop of late 20th-century movement, migration, and civil war in the Balkans. It is set in an anonymous provincial border town remarkable only for the most unremarkable of products: its soup and its light bulb factory. At the deserted railway station of this small European town (a station where trains no longer stop, but thunder threateningly by), the story of Sava and Katia unfolds. Sava and Katia are foreigners seeking refuge, a fact which draws a range of strikingly different, almost incompatible responses from the locals. Although Greig has playfully suggested that on reflection he would have called the play Scotland and that the unnamed setting might easily be Motherwell, Europe is less concerned with a referential locale than with what locality comes to mean within the context of globalization. One of Grieg’s most poignant pieces to date, it was described in the Scotsman as: '… a fierce, compassionate, mighty ambitious drama ... there is the sharp, analytical intelligence, the crackling inventiveness of a real writer buzzing about this gripping play.'

Other works associated with ‘Suspect Culture’, such as Lament, Local and Airport explore similar themes, and unfold in non-spaces, sites of transit, or borderlands. In The Cosmonaut's Last Message to the Woman He Once Loved in the Former Soviet Union (1999) two Soviet cosmonauts find themselves floating free in a capsule orbiting the earth, forgotten by the authorities on the ground. Meanwhile, more recent work like San Diego (2003) unfolds in over 20 different locations weaving, as the blurb has it, ‘a series of connecting and diverging stories, merging threads that stretch around the globe into a single compelling narrative’. Focusing on the diverse movements and trajectories of different people (prostitutes, pilots, celebrities, illegal immigrants), San Diego is at once a story about encountering America, and about Americanisation as a version of globalization. These are themes Greig explores further in The American Pilot (2005), a play about an American spy-plane that crashes in a remote country, and how local villagers respond to the discovery of the injured pilot. More recently, in Damascus (2007), Greig focuses on a city known to house one of the world’s oldest settlements, not as a site of stasis, but of transit and transformation.

Collectively these works signal Greig’s conviction that ‘there is this constant pull between actually wanting … to find something that roots us and is local, whilst at the same time wanting to embrace … the global.’ All the more interesting then, that he still tends to get described in regional terms as what the Scotsman calls ‘the most important playwright to have emerged north of the Border in years.

@DavieGreig @LisaMMcGee Why: endless depth, it's about writing and reading and love, variety, comedy, it's utterly flawed but t… https://t.co/aUGsqlCnhk
(2 hours ago)

@DavieGreig @LisaMMcGee I know it's boring but I get so much from Shakespeare. Winter's Tale being my favourite. 2nd Place The… https://t.co/ma9cAAdfDV
(2 hours ago)

@DavieGreig RT @JimSpenceDundee: The tragedy of Lionel Messi is that for all he’s achieved in the game, he’s now unlikely to ever fulfil his lifelong d…
(2 hours ago)