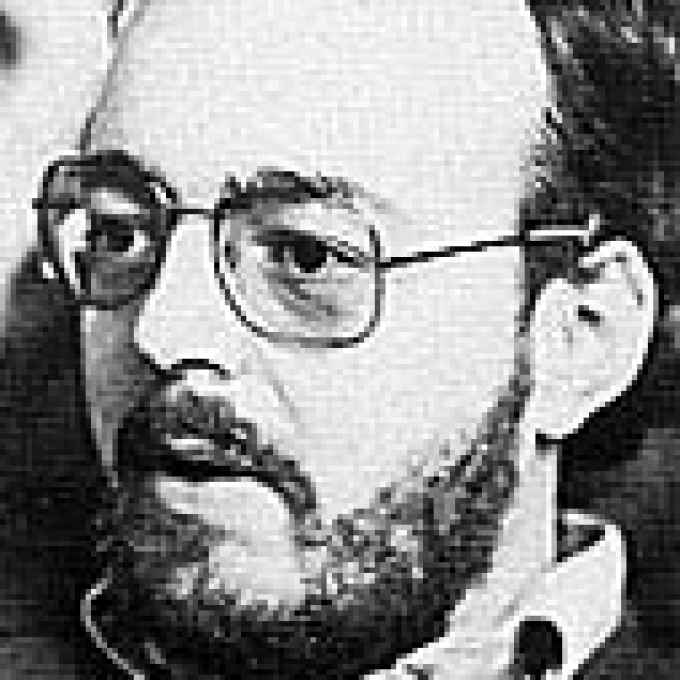 Playwright David Edgar was born in Birmingham on 26 February 1948.

He was educated at Oundle School and read Drama at Manchester University. After a short career in journalism, he took up writing full-time in 1972.

His plays include The National Interest (1971), Excuses Excuses (1972), Dick Deterred (1974), Saigon Rose (1976), Wreckers (1977), written for 7:84 Theatre Company, Mary Barnes (1978) and Entertaining Strangers (1986), commissioned by Ann Jellicoe and the Colway Theatre Trust. His plays written for the Royal Shakespeare Company (RSC) include Destiny (1976), winner of the John Whiting Award, The Jail Diary of Albie Sachs (1978), The Life and Adventures of Nicholas Nickleby (1980), winner of the Society of West End Theatres Best Play award and a Tony Award (USA), Maydays (1983), winner of the Plays and Players Award for Best Play, The Shape of the Table (1990), written for the Royal National Theatre in London, and Pentecost (1994), winner of the Evening Standard Award for Best Play of the Year.

More recent plays include Albert Speer (2000), based on Gitta Sereny's biography of Hitler's architect, first staged at the Royal National Theatre, The Prisoner's Dilemma (2001), an exploration of the nature of modern conflict, for the RSC, Playing With Fire (2005) and Testing The Echo (2008). In 2007, he wrote the romantic comedy, A Time To Keep, with his wife the dramatist, Stephanie Dale.

He is also the author of The Second Time as Farce: Reflections on the Drama of Mean Times (1988) and editor of The State of Play: Playwrights on Playwriting (2000). He was Resident Playwright at the Birmingham Repertory Theatre in 1974-5 (Board Member from 1985), Fellow in Creative Writing at Leeds Polytechnic, Bicentennial Arts Fellow (US) (1978-9) and was Literary Consultant for the RSC (1984-8, Honorary Associate Artist, 1989). He founded the University of Birmingham's MA in Playwriting Studies in 1989 and was its director until 1999. He was appointed Professor of Playwriting Studies in 1995.

His latest works are Arthur and George (2010), based on the novel by Julian Barnes, and The Master Builder (2010), a new version of Ibsen's classic.

David Edgar is a Fellow of the Royal Society of Literature. He lives in Birmingham.

‘Drama confronts our private dreams and agonies with the public rituals designed to mark and come to terms with them’, David Edgar has observed in How Plays Work (2003).

The interplay between private life and public life is indeed one of the abiding themes of his works. In the preface to this wide-ranging guide to the mechanisms and techniques of drama, David Edgar describes the origins of the book in the playwriting workshops and courses he ran at Birmingham University from the mid-1970s to 1999, which focused on dramatic problems that ‘can be collectively explored and individually applied’. He pays tribute to the writers and directors who came to talk to his students, notably his contemporaries Trevor Griffiths, Max Stafford-Clark, Howard Brenton, and Anthony Minghella. The book also draws upon his own wealth of experience in the theatre. Outlining the intrinsic structural problems of dramatic action, it gives a vast range of examples from Shakespeare, Ibsen, Brecht et al, as well as contemporary playwrights. Edgar’s own works are used to illustrate certain issues, and his comments on these are, of course, especially illuminating.

Edgar is best known as a political dramatist. Or, as he prefers to call himself, ‘a writer about public life’, whose stated ambition was to be ‘a secretary for the times through which I’m living’. He has developed from Brecht-like ambitions and working methods to produce a prolific number and variety of plays. Starting out in agitprop fringe theatre companies, polemical political plays made his reputation at a national level, going on to be acclaimed for his adaptations of Nicholas Nickleby for the Royal Shakespeare Company and later, Dr Jekyll and Mr Hyde (1991). He has also written plays with serious historical elements, perhaps most notably Albert Speer (2000), in which Hitler’s architect explains his conduct. As Edgar points out in How Plays Work, this was part of a trend in the theatre, the present day investigating the past and arguing with it. The play ‘sees a man constructing his take on his past life in Act 1, only to have the other characters challenge and undermine it in Act 2’. Edgar likes to make audiences think about moral and political dilemmas, but also presents human stories. He had done this Much earlier in another – rather contrasting - book adaptation, The Jail Diary of Albie Sachs (1978), chronicling the sufferings and heroism of a white lawyer during the apartheid regime in South Africa.

Edgar came to prominence with his ‘State of the Nation’ plays, Destiny (1976) and Maydays (1983), exploring respectively right-wing and left-wing extremism. Destiny opens with the 1947 twilight of the British Empire in India and then moves forward to a by-election campaign in the West Midlands involving the racist and fascist Nation Forward Party, its short scenes of powerful rhetoric set in army barracks, picket lines, committee rooms and a City bank. Maydays is a most persuasive portrait of the disillusionment of the Left, with a 25-year sweep of its characters from the idealism of the 1945 Labour victory, the 1956 Soviet invasion of Hungary, to the anti- Cruise Missiles camp at Greenham Common. Martin’s leftist activism gives way to the feeling that ‘we are catastrophically wrong’ and he becomes a right-wing journalist. Meanwhile, a former Soviet dissident speaks at a dinner organized by the Committee in Defence of Liberty. He declines their award, however, telling the audience: ‘Yours are not gaolers’ faces. But perhaps they are the faces of the people who employ the gaolers’.

Edgar’s major commercial successes have come from adaptations of classic novels. Dickens’ novel became The Life and Adventures of Nicholas Nickleby (1982), first staged at the Aldwych Theatre in June 1980 by the Royal Shakespeare Company, in a lavish production with a huge cast directed by Trevor Nunn, spread out over two evenings. The critic Michael Billington found its richness ‘rather like being force-fed on peacock’ but paid tribute to its ‘gusto and invention’ (One Night Stands, 1993). Edgar’s preparatory methods involved the whole company researching and discussing the novel’s social background. The result was not only a grand spectacle but also – by altering the novel’s happy ending - a morality play with pointed relevance to the-then recent election of the government of Mrs Thatcher. Dr Jekyll and Mr Hyde (staged at the Barbican in November 1991) split the title role between two actors, so Dr Jekyll could converse with himself. It was also a tour de force of theatricality, using many devices, including what Edgar described as the ‘old chiller trick of building up to a horror moment’ and then puncturing the audience’s expectation, ‘in order to increase the shock of Hyde’s actual entrance’. Billington again admired Edgar’s ability to give a Victorian novel contemporary resonance, turning it ‘into a metaphor for our own fear of other races, classes and cultures’.

With The Shape of the Table (1990) and Pentecost (1995) Edgar turned to political and cultural upheavals in Eastern Europe. The shape of the table was the central metaphor of the first play, changing shape at the start of each act to reflect negotiations to end a Communist regime and institute a democratic government headed by writer Pavel Prus (clearly alluding to Vaclav Havel in Czechoslovakia). It suggested though that morality was not all on one side, in the rush to exchange ‘the Red flag for the pop song, Pravda for Playboy’. The most human and in some ways poignant character is Josef Lutz, the veteran Communist leader whose cynical wit masks his courage in refusing to sign a request for a pardon. Pentecost is a parable of the clash of values between the old and new Europe, about the discovery of an ancient church fresco, which, it is claimed, is ‘not just the most valuable art-find of the century’ but also symbolizes ‘the birth of universal European man’. Representative characters argue the various issues; art historians, a Catholic priest, a government minister, (even, bizarrely, a Page 3 model) who are among the hostages when armed men take over the church and a tense siege ensues.

Playing with Fire (2005) was widely regarded as an effective attack on the values and record of the Blair government. In Testing the Echo (2008) Edgar returned to his core subject, the British state and ideas of Britishness, as ever drawing upon research and documentary elements. The play’s central conflict is between the attitudes of a female teacher of English and the values of some of her multiracial students attending a ‘Citizenship’ class, during which the difficulties of multiculturalism emerge. At the conclusion of How Plays Work, David Edgar observes that ‘storytelling is central to our being as humans’. This claim has certainly been amply justified by his own plays, whose morally complex stories have told us much about the state of Britain, contemporary Europe, and about humanity’s continuing dilemmas. He continues to be among Britain’s most distinguished theatre figures, and one of its most actively engaged.

'I was nearly four when I first went to the theatre. The play was Beauty and the Beast, and at the first entrance of the fearsome creature, I screamed the place down. Conveniently, my aunt ran the theatre, so I could be taken back, introduced to the beast actor, and thus calmed down. Back in my seat, on his next entry, I screamed the place down again.

I have had good experiences in the theatre since, but none quite like that. Come my next visit, I was wise to the illusion. And yet from the day the magic died - or more accurately, from the day I understood that it was magic - I wanted to be one of the magicians. But I didn't realise exactly what kind of magician, what job I wanted in the theatre, until, in my late teens, I discovered what I wanted it for.

With millions of others, I saw in the world-wide youth revolt of 1968 the prospect of a world without poverty, exploitation and war, and the possibility of my generation bringing that utopia about. In a considerably but not entirely revised form, that belief has informed everything I have written for the theatre since. The politics of the late 1960s involved much conjuration; it will take another and even stronger kind of sorcery to reverse the backlash against its ideals. But for me, making magic real is what it's always been about.'