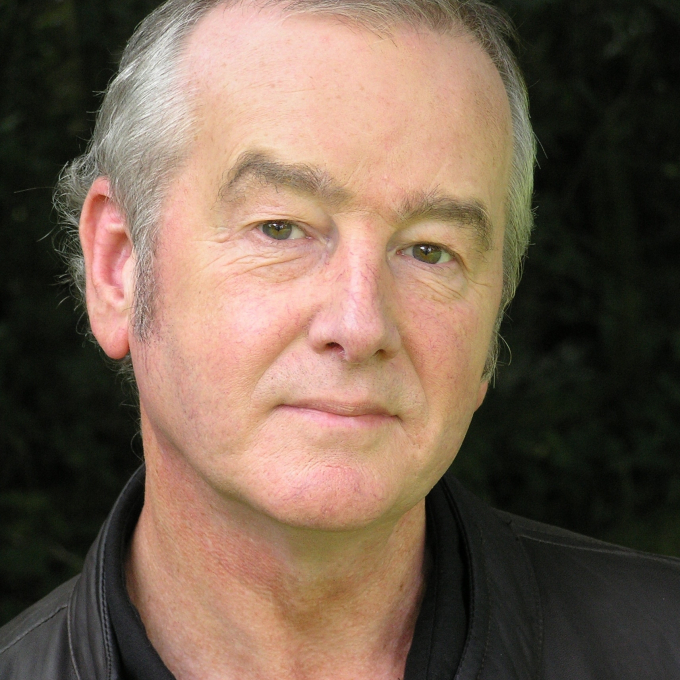 David Almond was born in Newcastle upon Tyne in 1951 and grew up in the small mining town of Felling.

He was educated at the University of East Anglia and Newcastle Polytechnic. After graduating, he worked as a teacher for five years before moving to a remote artists' commune in Norfolk to concentrate on his writing. He then returned to Newcastle, where he worked as a part-time Special Needs teacher and edited the literary fiction journal Panurge. He is an experienced creative writing teacher and has worked for the Arvon Foundation and for schools, colleges and universities, and is in demand as a speaker at festivals and conferences around the world.

His first book, Sleepless Nights, a collection of short stories for adults, was published in 1985 and was followed in 1997 by a second volume, A Kind of Heaven. His first children's novel, Skellig, the story of a strange, part-human 'creature' who transforms the lives of two young children forever, was published to immediate acclaim in 1998. The book won both the Carnegie Medal (1998) and the Whitbread Children's Book Award (1998). In 2007, it was shortlisted for the Carnegie of Carnegies. He was given an Arts Council Writers' Award to work on Kit's Wilderness (1999), a teenage novel inspired by the author's childhood memories of disused mines. It was awarded a Nestlé Smarties Book Prize (Silver Award) and was shortlisted for the Carnegie Medal (2000) and for the Guardian Children's Fiction Prize.

Counting Stars (2000) is a collection of children's stories, again inspired by the author's memories of his own childhood and family, and a selection of stories from this volume was published separately in March 2002 under the title Where Your Wings Were, as one of five World Book Day publications. A play, Wild Girl, Wild Boy, was published in March 2002, and a stage version of Skellig was published in April 2002 to coincide with the National Theatre's production of the play. The Fire-Eaters (2003) centres on the fortunes of Bobby Burns and his encounters with a fire-eating devil called McNulty. It was awarded the Gold Medal in the Age 9-11 category at the 2003 Nestlé Smarties awards and won the 2003 Whitbread Children's Book Award. It also won the Boston Globe-Horn Book Award (USA). Clay (2005) was shortlisted for the 2006 Costa Children's Book Award and the 2006 Carnegie Medal.

David Almond's work has been translated into more than 20 languages. He lives in Northumberland and was the recipient of the Hans Christian Andersen Award in 2010. His children's novel My Name is Mina (2010), a prequel to Skellig, was nominated for a 2012 Carnegie Medal. In 2011 his first adult novel was published - The True Tale of the Monster Billy Dean. This was followed by The Boy Who Swam with Piranhas (2012) a children's book illustrated by Oliver Jeffers, Mouse Bird Snake Wolf (2013) with illustrator Dave McKean, A Song for Ella Grey (2014) and The Tightrope Walker (2014), a novel for young adults, and The Colour of the Sun (2018).

David Almond's novels for children and teens have all been hugely popular with readers young and old, and highly acclaimed by critics and reviewers. They often feature on National Curriculum reading lists, as well as being the subject of academic study of children's literature. Almond combines a variety of influences: most of his fiction is set in his home territory of north-east England, poignantly capturing its landscape, people and mythologies; other influences include magic realist literature, Arthurian legend and the work of William Blake. The result is an infusion of thought-provoking, philosophical ideas and magical elements, all rooted in a realistic and detailed evocation of place. In March 2010, Almond received the Hans Christian Andersen Award, the most prestigious prize in children's literature. The jury citation praised both his imaginative approach and his ability to actively engage and stimulate his readers: "... the jury has recognised the unique voice of a creator of magic realism for children. Almond captures his young readers' imagination and motivates them to read, think and be critical. His use of language is sophisticated and reaches across the ages."

Almond experienced two bereavements during his (otherwise fairly happy) childhood: the death of his baby sister when he was seven and, during his teens, the early death of his father. He was, therefore, acutely aware at a young age of both the joy and darkness of life. His fiction embodies this understanding of life's seemingly contradictory and fluctuating nature and is, like the work of Blake, quite dialectic in tone, exploring the interaction of good and bad, pleasure and pain, and so on. His tone avoids bleakness - though he does explore the darker side of life, he depicts his characters learning to accept both darkness and lightness, as Almond himself comments: "Growing up [...] involves coming to terms with a world in which reality and myth, truth and lies, turn about each other in a creative dance, as they always have and always will." Almond, therefore, enchants and captivates his young readers but also 'stretches' them, both emotionally and intellectually: life is not an easy ride, but an adventure, a path of learning and self-discovery that inspires and challenges you to find your own potential.

After many years of writing fiction for adults, Almond's first novel for children, Skellig (1998), was an instant success, both commercially and critically. The first print-run sold out within a few days, and the novel achieved the rare honour of two prestigious awards: the Carnegie Medal and the Whitbread Children's Book Award. Skellig draws on Almond's own childhood experiences: the protagonist, Michael, has a baby sister who is seriously ill and the family is therefore in emotional chaos. However, while Almond was helpless to save his own sister, Michael finds a mysterious source of help in the garage: Skellig, a surreal creature who is part-tramp and part-angel, neither wholly ordinary nor wholly supernatural. However, like most of Almond's child characters, Michael is by no means a passive beneficiary: on the contrary, it is Skellig who first needs help from Michael and his friend Mina, who nurture him with food, medicine and friendship. Skellig has been acclaimed, particularly for the way in which it intertwines the realist elements of the story - the crisis experienced by Michael and his family as the baby undergoes major surgery - with subtle threads of the spiritual and the supernatural. Almond also keeps some of the story's mysterious elements open-ended - by refusing to fill in all the gaps, he allows his readers space to think for themselves.

Almond's subsequent novels for children and teens continue in a similar vein, poignantly combining the everyday reality of growing up with suggestions of magic, mystery and spiritual elements. Kit's Wilderness (1999) features another young boy, 13-year-old Kit, who has just moved with his family to a old coal-mining town in order to be close to his ageing grandfather. In this novel, the echoes of Almond's childhood environment are particularly acute, for as Kit gets to know his new town and its surrounding area, the novel paints detailed, poignant images of north-eastern landscape and history. Again, daily domestic and emotional life connects to a wider sphere: Kit must adjust to a new school and new friends, while his introduction to his schoolmates' game of 'Death' in the old mines links him to the ancestors of local people. Meanwhile, his grandfather encourages him to explore his imagination by writing his own stories, and thus Kit, like Almond, learns to intertwine the ordinary world with magic and creativity through the power of storytelling.

The Fire-Eaters (2003), set during the Cuban Missile Crisis in 1962, tells the story of 12-year-old Bobby as he grows up in a coastal village in the shadow of threatening nuclear war. Bobby's developing perceptions of life and humankind are thus indelibly marked by this experience of approaching adulthood in a world that is facing the threat of destruction. Alongside this, Bobby's father is ill and his school-teacher is inflicting cruelty - thus, Bobby's personal world begins to shake, just as the wider world is also under threat. Yet, like most of Almond's child characters, Bobby is strong and resilient, while the author adds another dimension to the story in the form of McNulty, a fire-eating street performer who demonstrates the ability to transcend pain.

Clay (2005) is also set in 1960s Northumberland, exploring a working-class Catholic community and gradually bringing in supernatural elements. It is very much a crossover novel - its darker nature makes it more suitable for teens and even adult readers. Teenagers Davie and Geordie befriend Stephen, a strange and mysterious new boy who makes models out of clay. Stephen shows his new friends that they can make things come to life, but these new-found supernatural powers bring chaos and confusion to Davie's life. In this novel, Almond delves into the more chilling and disturbing elements of the supernatural - Clay is a gripping read, haunting and somewhat sinister, as Stephen's mind-games bring terrible consequences.

The Savage (2008) features a young boy who finds his own way to come to terms with the darker side of life and human nature. Blue has lost his Dad, and in his grief turns to story-writing, creating a wild-child character who embodies the darker aspects of his own nature - those parts that struggle to find acknowledgement and expression in daily life. Once again, the boundaries between reality and fantasy are blurred, as Blue's story begins to take on a life of its own. The Savage offers a candid depiction of the raw and overpowering emotions of grief, yet ultimately affirms the healing power of love and a supportive family.

"I grew up in a big family in a small steep town overlooking the River Tyne. It was a place of ancient coal mines, dark terraced streets, strange shops, new estates and wild heather hills. Our lives were filled with mysterious and unexpected events, and the place and its people have given me many of my stories. I always wanted to be a writer, though I told very few people until I was 'grown up'. I write for adults as well as children. I've been a postman, a brush salesman, an editor and a teacher. I've lived by the North Sea, in inner Manchester, in a Suffolk farmhouse, and I wrote my first stories in a remote and dilapidated Norfolk mansion. Writing can be difficult, but sometimes it really does feel like a kind of magic. I think that stories are living things - among the most important things in the world." David Almond, Counting Stars, Hodder Children's Books, 2000.

@davidjalmond @MimiThebo Glad you're enjoying it, Mimi! x
(1 days ago)

@davidjalmond RT @martaltes: #brandnewboybook Paperback edition will be out on the 3rd of February!! 💛 I love this new cover! Written by wonderful @david…
(3 days ago)