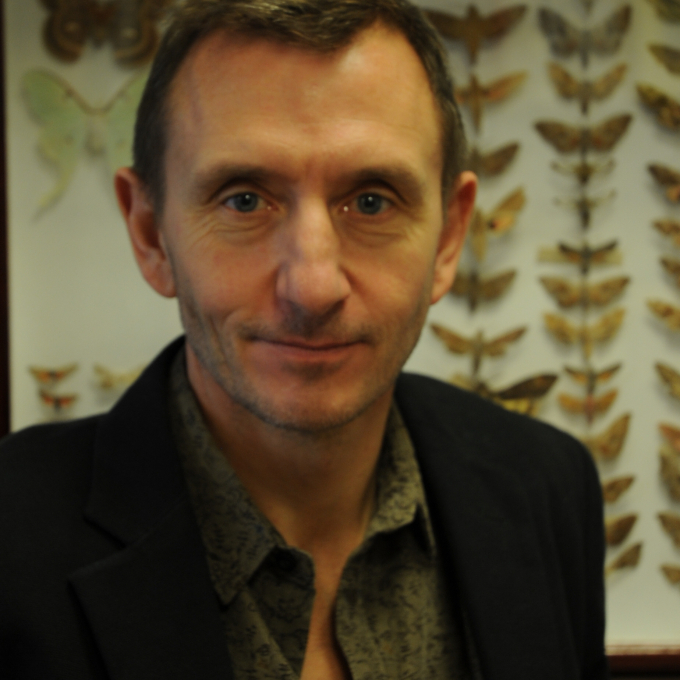 Dave Goulson is a British biologist, conservationist, and Professor of Biology (Evolution, Behaviour and Environment) at the University of Sussex, specializing in the ecology and conservation of bumblebees.

He was born in 1965. After a childhood chasing butterflies and collecting bird’s eggs, he studied Biology at Oxford University, and then completed a PhD on butterfly ecology at Oxford Brookes.

From 1995 he taught at the University of Southampton, where he stayed for 11 years and began to specialize in bumblebee ecology and conservation. In 2006 he became Professor of Biology and Stirling University and founded the Bumblebee Conservation Trust, a charity devoted to reversing bumblebee declines. He moved to Sussex in 2013.

He has published over 200 scientific articles on the ecology of bees and other insects, and am author of Bumblebees; their behaviour, ecology and conservation (2010, Oxford University Press) and A Sting in the Tale (2013, Jonathan Cape), a popular science book about bumblebees which was shortlisted for the Samuel Johnson Prize.

Goulson is a Fellow of the Royal Entomological Society, and a Fellow of the Royal Society of Edinburgh. In 2010 he was BBSRC "Social Innovator of the Year" and in 2013, he won the Marsh Award for Conservation Biology from the Zoological Society of London. In 2015 he was listed and number 8 in BBC Wildlife Magazine's list of the top 50 'Conservation Heroes'.

Aptly dubbed the “eloquent entomologist” by the Telegraph, Biology Professor Dave Coulson has become a surprise bestseller after discovering that readers beyond the academy are interested in what he has to say about the secret lives of insects and birds.

He was already established as one of the UK’s most respected conservationists, and a prominent researcher at Sussex University, with over 200 articles on ecology of bees to his name. But in 2010 Goulson began a series of increasingly well-received popular renderings of these subjects, bringing the pleasures of natural history to a wider audience.

Having freed himself from what he calls the “restraining shackles of academia speak,” Goulson has proved himself particularly gifted at transmitting his enthusiasm for the tiniest of creatures in works that fuse science writing with memoir. Some have compared his enthusiastic, playful but rigorous approach to that other zoologically inclined man of letters Gerard Durrell, with whom he shares an ability to combine child-like passion for natural science with a strong ethical and moral vision of the duties of conservation.

His first book of this type was Bumblebees: Behaviour, Ecology, and Conservation (2010), a research guide for scientists that also doubled as a primer for students. Bumblebees, that book noted, were familiar and “charismatic” insects, and were increasingly used as a model organism for tracing a range of ecological nad behavioural concepts such as social organization, foraging and pollination. As Goulson also pointed out, there was cause for concern that their extinction might be nearer than we think. And the book only offered a polemic on behalf of sensitivity to wildlife, and his “belief that action was needed”:

'It is probably not going too far to say that if humans are going to thrive in the future, and have anything like the standard of living that we in the developed world enjoy today, then we simply have to look after our bumblebees. With dedication and a little luck perhaps we can conserve the ‘burly, good-natured bumblebee’ for future generations to enjoy.'

In 2013, Goulson shifted tone and translated these ideas to a popular audience with A Sting in the Tale (2013). In a newly conservational and gripping style, the book combined a passionate exploration of the bumblebee with an unexpectedly beguiling glimpse of a childhood spent obsessed with exotic pets and experimental taxidermy. Goulson detailed the minutiae of life in their nests, sharing fascinating research into the effects intensive farming has had on our bee populations and on the potential dangers if we are to continue down this path. Throughout, his wry wit made all of this accessible: one memorable aside saw Goulson observe that “Bumblebees seem to be our second favourite insects, after butterflies; like Boris Johnson, they can do no wrong for most people, being similarly shaggy-haired, rotund, colourful and seemingly friendly.” This lightness of touch helped readers to focus on what was at stake in such a seemingly dry subject. and also gave a real sense of what it was like to be an entymologist, and the thrill of being part of scientific development and conservation activism.

Many critics were taken aback by the joys to be found in such an esoteric subject, and praised the genial vision. Martin McCarthy in the Independent though A Sting in the Tale "not only enormously informative, but also hugely entertaining: its light touch and constant humour make cutting-edge research a pleasure to read about… For anyone interested in the natural world, this is essential reading." Mark Mason in the Spectator noted that “this isn’t one of those natural science books that simply tells you things — it admits how much we don’t know … By recounting his wonder at the unsolved mysteries Goulson makes himself a likeable and trusted voice” The book was serialized as a book of the week on BBC Radio 4, and shortlisted for the 2013 Samuel Johnson Prize.

Its successor, A Buzz in the Meadow (2014), centred on the story of how Goulson had transformed a farmland in Charente, France, into a model home for wildlife. With the same casual anecdotal charm, he shifted his scope from bees to a far broader swathe of the smaller animals of the kingdom.  The book chronicled his often comically ill-fated efforts and those of his associates, as they sought to learn as much they could from this patch of French earth. And as the prose shifted from life form to life form he began to make the compelling case, in a deft and breezy fashion, for the interconnectedness of nature. Again, Goulson was outspoken about his conservationist ambitions.  As the preface tells us “this book is a wake-up call:

'urging us to cherish and protect life on earth in all its forms. Goulson has that rare ability to persuade you to go out into your own garden or local park and get down on your hands and knees and look. The undiscovered glory that is life on planet Earth is there to be discovered. And if we learn to value what we have, perhaps we will find a way to keep it. … a call to arms for nature lovers everywhere.'

Admirers of his previous work were quick to praise this follow-up. Nicola Davies in the Telegraph told of how Goulson’s “details of insect lives that had me exclaiming with delight, from the female flies who have evolved fat legs to improve their pulling power, to bugs that suck the blood of vampire bats … His descriptive style is clear and elegant, with exactly the right dusting of humour” This was no “cosy, Peter Mayle-esque account of a rural idyll,” observed a relieved Suzi Feay in the Financial Times, “in fact, ‘the science bit’ can get overwhelming at times … But it’s worth sticking with his complex arguments” particularly regarding the arguments related to possible link of bee colony collapse, “and the possible link to neonics, the new class of insecticide introduced in the 1990s. Goulson’s patient attempts to establish a link become as gripping as any forensic thriller.”

By drawing public attention to the magic and sheer precariousness of the micro world that surround us. Goulson’s chief aim is to translate his literary acclaim into practical action. And he hopes to have helped to inspire a new generation of young naturalists. “The thing that really worries me,” he told one radio interviewer in 2013, “is that kids increasingly don’t spend a lot of time outdoors. They don’t learn about the natural world. What could be more important than understanding the world we live in?”

2014
A Buzz in the Meadow
2013
A Sting in the Tale
2010
Bumblebees; their behaviour, ecology and conservation
2009
Gardening for Bumblebees

@DaveGoulson In my son's moth trap today: a burnished brass. Amazing to think that such stunning creatures live in our gardens. 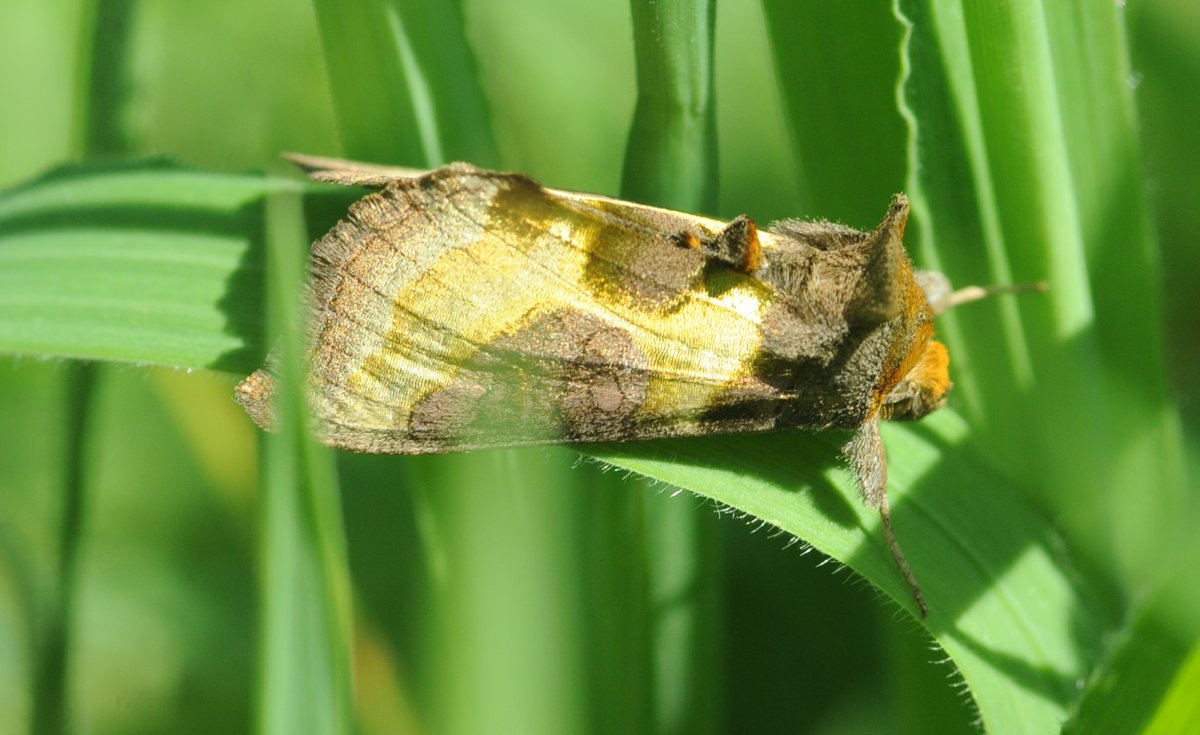 @DaveGoulson RT @SWTwellbeing: A while ago I built a log store & put a green roof on to make more space for colour & pollinators. The kidney vetch has g…
(2 hours ago)

@DaveGoulson Come on Sussex Uni, this is embarrassing! https://t.co/Z4oeW3Zqwm
(2 hours ago)

@DaveGoulson @ScrivensB Just a mix of home-made compost and mole hills!
(10 hours ago)