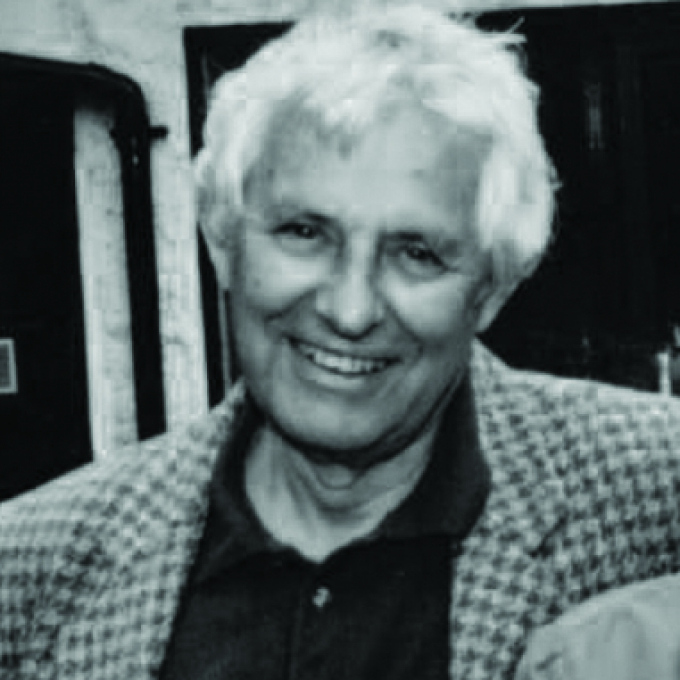 Poet Dannie Abse was born on 22 September 1923 in Cardiff to Jewish parents.

He studied Medicine in Wales and at King's College, London, qualifying as a doctor in 1950. His first collection of poetry, After Every Green Thing, was published in 1948, and he has continued to combine his careers as both a doctor (he was a specialist at the Central Medical Establishment chest clinic between 1954 and 1989) and writer, aspects of his life that, together with his Jewish background and Welsh nationality, are integral themes in his poetry. Dannie Abse was Senior Fellow of the Humanities at Princeton University (1973-4), and President of the Poetry Society (1978-92). He became a Fellow of the Royal Society of Literature in 1983, Fellow of the Welsh Academy of Letters in 1992 (President 1995-), Honorary Fellow at the University of Wales College of Medicine (1999), and was awarded an honorary doctorate by the Universities of Wales (1989) and Glamorgan (1997). He was given a Cholmondeley Award in 1985.His poetry collections include Selected Poems (1970), winner of an Arts Council of Wales Literature Award; Pythagoras (1979); Way Out in the Centre (1981); Ask the Bloody Horse (1986); and White Coat, Purple Coat: Collected Poems 1948-1988 (1989). He has also published fiction, including Ash on a Young Man's Sleeve (1954) and O. Jones, O. Jones (1970), as well as non-fiction and plays, and he has edited many poetry anthologies. Goodbye, Twentieth Century: An Autobiography (2001), includes and updates his first volume of autobiography, A Poet in the Family (1974). His most recent novel, The Strange Case of Dr Simmonds & Dr Glas (2002), is set in 1950s London.  The Two Roads Taken: A Prose Miscellany was published in 2003.

Dannie Abse was married to the late Joan Mercer, art historian, with whom he edited two books, Voices in the Gallery: Poems and Pictures (1986) and The Music Lover's Literary Companion (1988).

His memoir, The Presence (2007), is a celebratory portrait of his 50-year marriage. It won the Arts Council of Wales Book of the Year Award in 2008. New Selected Poems 1949-2009 (2009) has been published to coincide with the 60th anniversary of his first collection After Every Green Thing and was shortlisted for the Ted Hughes Award for New Work in Poetry.

In 2009, he won the Wilfred Owen Poetry Award. Two for Joy: Scenes from Married Life (2010), is a collection of poetry celebrating his relationship with his late wife, Joan Abse. He was awarded a CBE in 2012 for services to poetry and literature.

It marks the poet’s own rigorous selection from 60 years of his published work from Hutchinson and includes a selection of new poems. Abse began writing in the late 1940s, but his work has managed to be his own and to avoid the influence of any of the many trends of the times through which he has lived. True, there are faint traces of the rhetoric of the 1940s in an early poem such as ‘Epithalamion’ or his ‘Elegy for Dylan Thomas’, but at around the same time he wrote a very original kind of poem indeed in ‘Letter to Alex Comfort’ where, what appears as a deceptively relaxed conversational letter style, in fact introduces a new tone, a new way of speaking into his poetry:

"Alex, perhaps a colour of which neither of us has dreamt may appear in the test-tube with God knows what admonition. Ehrlich, certainly, was one who broke down the mental doors, yet only after his six hundred and sixth attempt."

Alex Comfort is praised in the poem as a poet who is able to "curse those clever scientists /who dissect away the wings and haggard heart from the dove." Dannie Abse and Alex Comfort both trained as medical doctors, and the poem looks for meaning and middle ground connecting the 'two cultures' of science and art. Abse wrote a later poem, ‘As I was Saying’, which refines this way of talking to the reader through a poem; a style, incidentally, which W. S. Graham later used in his letter poems to Bryan Wynter and Roger Hilton in the 1970s. It is as though, stylistically, Abse early on swapped his allegiances from the poetry of Dylan to that of Edward Thomas. Abse co-edited an anthology of contemporary poetry, Mavericks, in 1957, and this word accurately reflects something of the approach of his own work, which flows against any cohesive orthodoxy and presents us with an authentic individual voice.

Abse has perfected a style where the intimate and the public coexist happily together – in itself a notable achievement. He is a poet who communicates to a relatively wide readership and whose multiple identities bind together into an inclusive humanity reflecting his Welsh and Jewish ancestry, but without needing to labour either excessively. Like William Carlos Williams, who also combined the role of doctor and poet, Dannie Abse has lived equally in both worlds, and this is implicit in the ‘Letter to Alex Comfort’ quoted earlier. This has added a dimension to his work, especially in poems such as ‘Pathology of Colours’ with its memorable opening lines: "I know the colour rose, and it is lovely, /but not when it ripens in a tumour." Or the remarkable and alarming ‘In the Theatre (A true incident)’ which recounts an operation for a brain tumour in 1938 under local anaesthetic  wherein, after an hour of failure to find the growth, the still conscious patient speaks:

Proof that the poems of Abse are far more unsettling than they sometimes appear. Beneath an amiable surface, on close examination, they demonstrate a tough but humane mind. An example might be the disquieting and dramatic surrealist sequence ‘Funland’, in which seriousness and comedy rub shoulders effortlessly. The narrative takes in the Greek Pythagoras, ideas of blue-haired red-eyed Thracians, an atheist uncle, Fat Blondie, and is in form a dramatic poem which could be spoken by several voices, reminding us that Abse is a playwright as well as a poet.

The poet and critic Elaine Feinstein has said of Dannie Abse that "He remains one of our few great poets of married love", a statement borne out in many poems: from the early  ‘A Night Out’ where a film recreating the horrors of Auschwitz is countered by a the couple returning home where  they "in the dark, in the marital bed, made love", to the most recent poems on the tragic death of his wife Joan in a car accident where he writes in ‘After the Memorial’ with a tender  and decent stoicism:

"… she is both manifest and concealed – manifest because I see her everywhere, concealed because she is nowhere to be found."

Dannie Abse is also a distinguished prose writer and The Presence (2007) addresses the loss of his wife Joan while, as in the poem, feeling her presence everywhere. Among his other prose books, his autobiography A Poet in the Family (1974), is notable. It is a highly engaging and readable book which quite modestly tells the story of a family he presents as ordinary but which the reader comes to see as truly exceptional, and in which Dannie and his brothers (Leo the MP and Wilfred the psychiatrist) chose careers which contribute much to the benefit of humanity.

Other aspects of Abse’s commitment to poetry can be seen in his editorship of the journal, Poetry and Poverty in the 1950s; the previously mentioned anthology Mavericks edited with Howard Sergeant (1957), which attempted to represent the individual talents at work outside the then prevalent orthodoxy of the Movement poets; and the important Poetry Dimension annuals he edited each year between the years of 1974 to 1980, which provided an annual eclectic overview of much of the best poetry and prose written  each year. Before this he edited some of the volumes in another influential series, Modern Poets in Focus, which included selections from the works of many contemporary poets who had been overlooked or were yet to be applauded.

Dannie Abse has always been an excellent reader of his poems and it should be noted that he was one of the first people to take part in the resurgence of poetry readings in public. In February 1961, Jeremy Robson began the trailblazing Poetry and Jazz concerts which mixed poetry with contemporary jazz and filled halls around the country. These readings were immensely influential in creating the audiences for poetry readings which rose to prominence in the 1960s and are now an established part of the poetry scene, and where poems written for the printed page take on their older life as part of an oral spoken tradition too.

But it is first and foremost as a poet that we should view his achievement. And there is always present in the work of Dannie Abse a vivid sense of what it is to be alive and the blessings this brings, as in the recent ‘Valediction’:

"In this exile people call old age I live between nostalgia and rage. This is the land of fools and fear, Thanks be. I’m lucky to be here."