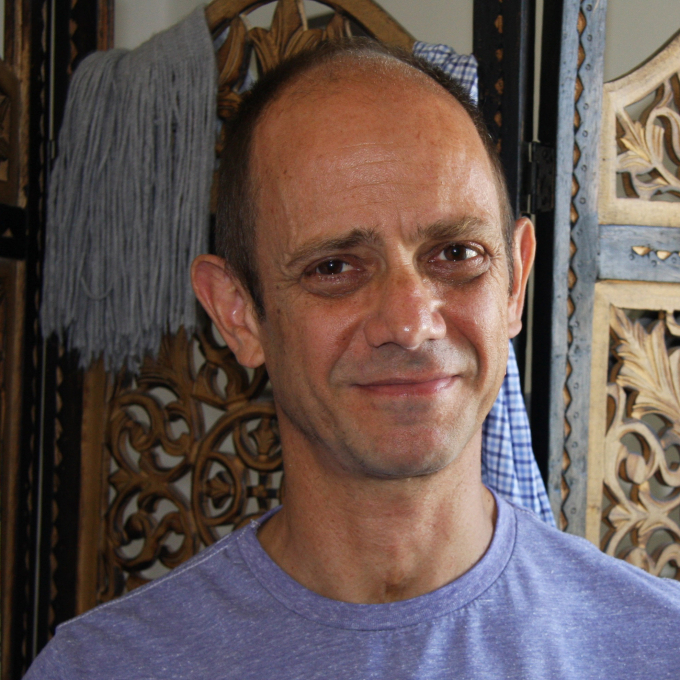 Damon Galgut is a playwright and novelist living in Cape Town.

He was born in Pretoria in 1963 and studied drama at the University of Cape Town, writing his first novel, A Sinless Season (1984), when he was seventeen. Small Circle of Beings (1988), a collection of short stories, was followed by the novel The Beautiful Screaming of Pigs (1991), the tale of a young white South African on military service who suffers a nervous breakdown, and The Quarry (1995), which was made into a film by a Belgian production company.

His novel, The Good Doctor (2003), set in post-Apartheid South Africa, explores the uneasy friendship between two very different men in a deserted, rural hospital. It won the 2003 Commonwealth Writers Prize (Africa Region, Best Book) and was shortlisted for the 2003 Man Booker Prize for Fiction and the 2005 International IMPAC Dublin Literary Award.  It was followed by The Impostor (2008).

His latest novels are In a Strange Room (2010), shortlisted for the 2010 Man Booker Prize for Fiction, and Arctic Summer (2014), a fictionalised account of EM Forster's relationships in wartime Alexandria and India.

Damon Galgut has staked a unique place for himself in contemporary South African literature.

Like Northern Ireland or Palestine, South Africa expects its writers to comment on politics, though this can prove both a cause and a burden. Galgut has not been shy of addressing the state of his country and the shadow left by apartheid, but his focus remains on the power play between individual people, and the forces which bind or sever them.

His first novel, A Sinless Season (1984), was written when he was just 17, though he is reluctant these days to discuss what he calls a work ‘written by an adolescent who I can’t relate to or understand any more.’ Likened in reviews to Golding’s Lord of the Flies, it’s the story of three juvenile delinquents sent to a reformatory high above a remote part of the South African coast. The school’s façade of civilisation begins to break down when one of the boys is found dead at the foot of the cliffs in suspicious circumstances.

Galgut has also written plays which have been performed in South Africa and overseas, as well as short stories. Small Circle of Beings (1988), is a collection which centres on the personal space of the family unit (the claustrophobic ‘small circle’). The title story is a novella-length piece drawing on Galgut’s own experience of serious illness. Diagnosed with cancer when he was six, he spent many months in bed being read to by relatives, and now regards that time as crucial to his development as a writer. Galgut opted to write ‘Small Circle of Beings’ from the perspective of the boy’s mother however, whose concern for her sick child leads to an oppressive relationship. The family live in an isolated rural location, but despite their troubles, and the lack of alternative company, they remain hopelessly alienated from each other.

The Beautiful Screaming of Pigs (1991), is perhaps Galgut’s most overtly political book. Narrator Patrick Winter accompanies his mother on a trip to Namibia, to see her new boyfriend and to witness the country’s first free elections. He is returning for the first time in a year, since his military service in the north of the country – then still known as South West Africa – and he is still coping with what happened there. Characteristically, the book foregrounds an intensely personal situation – Patrick’s struggle to reposition himself in the world, his hinted-at homosexuality, and his relationship with his mother – against a setting charged with political and historic moment. Galgut reveals a playwright’s fascination with the characters’ triangular interaction, and with a protagonist whose reluctance to assert his identity is forced to make-or-break point.

In The Quarry (1995), a nameless man, apparently on the run, kills a priest who is on his way to take up a new post in a South African township. The murderer hides the body in a disused quarry and assumes the dead man's identity. The suspense lies in his evasion of both the local policeman, and his own conscience – especially when one of his first jobs as new minister is to bury the recently discovered body of a murdered man. As the novel progresses though, it becomes clear that Galgut is more interested in the story as myth than as naturalistic narrative. The minister's cassock, the blood stains on the murderer's clothes, and the church-cum-court house take on symbolic status, and the relationship between murderer and victim, hunter and quarry, comes slowly to the fore. A tense finale takes place during an eclipse of the sun, and the skilful, subtle way in which Galgut brings the tale to its conclusion does justice to it both as individual drama and universal story. What raises the book above the level of an entertaining parable is the quality of the writing: razor-sharp and barren, like the landscapes it describes, yet with an unfailing ability to surprise with a turn of phrase or an effective metaphor.

Galgut’s best-known novel is The Good Doctor (2003), for which he was shortlisted for both the Man Booker Prize for Fiction, and the Commonwealth Writers Prize (Africa Region, Best Book). Set in the forgotten no-man’s-land of South Africa’s artificially created ‘homelands’, a bureaucratic non-place, narrator Frank Eloff is a doctor in a hospital nobody uses. A skeleton staff, long since resigned to the status quo, keeps things running in a token way. But when Frank’s new room-mate arrives, an enthusiastic young doctor called Laurence Waters, the settled lives of the hospital staff are set for disruption. In this unforgiving environment, where personalities close in on themselves in order to survive, the new recruit’s naïve openness is both an embarrassment and a chink of light. When Laurence’s determination to confront complex problems head-on, without considering the consequences, begins to make life difficult for everyone, and when the sinister shadows of the area’s former and current authorities begin to lengthen, Frank is forced to reconsider his own priorities. Galgut’s deft characterisation of both Frank and Laurence forbids the reader from liking either of them whole-heartedly. Instead we are invited to compare and contrast them as men from adjacent generations, separated by an experience of war (Frank comes from the last generation to have taken part in compulsory national service). Yet of Laurence, Frank admits that ‘to me he has become everything. Everything, at least, that I am not.’ In any other environment, one senses, their characters would complement each other happily. Yet Laurence isn’t a ‘good doctor’ in any straightforward way. His idealism creates problems for everyone – including, ultimately, himself. Set during South Africa’s attempts to reshape itself post-apartheid, the novel is, as Christopher Hope wrote in The Guardian, ‘a sustained meditation upon the unreliability of new dawns’.

Reading Damon Galgut is not a comfortable process. Landscapes are bleak, characters troubled, situations tense, and atmospheres brooding. Yet where other South African writers have been forced by the loss of a cause to reinvent themselves, Galgut has found a compelling way of dealing with complex situations – and the weight of politics and history – in a subtle, engaging way. The scalpel-sharp precision of his writing ensures that readers are drawn in and stay the course.