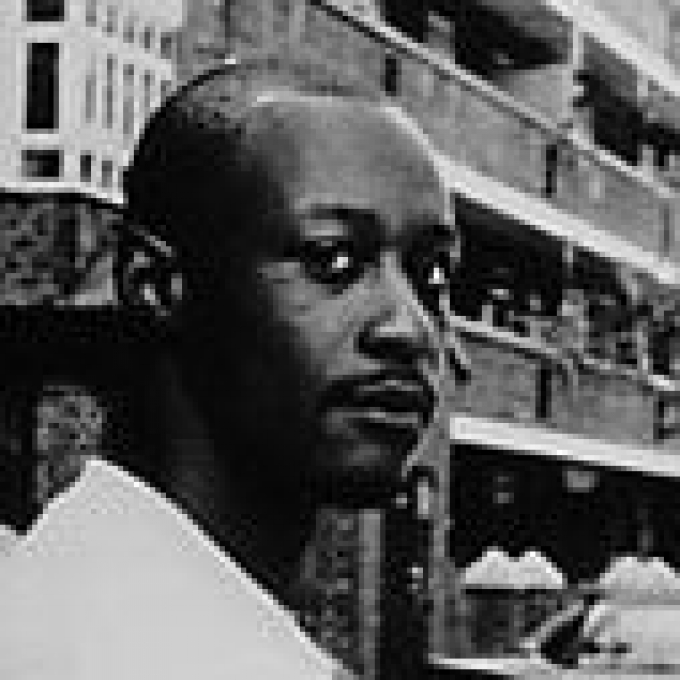 Courttia Newland was born in 1973 to parents of Caribbean heritage.

In 1997, he published his first novel, The Scholar. Further critically acclaimed work followed, including Society Within (1999) and Snakeskin (2002).

He is the co-editor of the anthology IC3: The Penguin Book of New Black Writing in Britain (2000) and has short stories featured in many other anthologies including The Time Out Book of London Short Stories: Vol 2 (2000) and England Calling:24 Stories for the 21st Century (2001).

His books include a novella, The Dying Wish (2006), and a collection of macabre short stories, Music for the Off-Key (2006). In 2007 he was shortlisted for the Crime Writers' Association Dagger in the Library Award.

In 2009 he co-edited, with Monique Roffey, The Global Village (2009), and in 2014 co-wrote with Tania Hershman the non-fiction guide Writing Short Stories. His most recent novel is The Gospel According to Cane (2013).

For all its up-to-the-minute action, hip musical allusion and sharp street credentials, Courttia Newland’s writing in many ways seems to look backwards towards the early postwar pioneers of black British fiction such as Samuel Selvon.

Like Selvon, Newland is a poet of the city for whom London’s place names and passageways carry a powerful charge. Also like Selvon, Newland is a successful short story writer (see for example his macabre collection, Music for the Off-Key, 2006) and his imaginative promotion of the short form through the ‘Tell Tales’ collective, of which he is co-founder.) Below is a paragraph from the opening of one of Newland’s latest short stories, ‘Re-Entry’ (2009):

'Orange sodium light made city faces look sickly, he’d always thought that. Above his head, the stream of cars on the A40 Westway calmed him somewhat. That hadn’t changed, probably never would. The row of shops across the street was a strange mixture of things that hadn’t been and always had. The bright lights of the estate agents, new; the gloomy façade of the former Lazerdrome, old. The huge shop that sold custom refrigerators, old. The post office, well old. The dentist’s, refurbished, but old still, likewise the charity shop and bakery. He almost smiled when he saw a lumbering 452 double decker - he and Drake had regularly caught its older sibling, the 52, when his friend went out with a mixed race girl from Willesden Green. He bounced on his toes, fingers clenched in his pockets until he thought that might make him look too out-of-place, too foreign. Then he took another look at the pedestrians and knew somehow, that didn’t matter anymore.'

By this stage in the story we have already passed through Paddington underground and along Ladbroke Grove with Craig, our guide and protagonist. Craig is on his way to meet Drake, but the immediacy of his activities are undercut by an almost nostalgic, memory-infused, and lyrical evocation of an old if seedy city that is continually making itself anew. Like Selvon’s The Lonely Londoners (1956), this is a city towards which its characters feel both affection and alienation, love and loss.

Newland’s writing (again, like Selvon’s) is sometimes regarded by the establishment as lacking literary ‘seriousness’, and he is less likely to feature on university reading lists than, say, Zadie Smith or Caryl Phillips. The dividing lines between high and popular culture may have all but imploded since Selvon’s day, but when the routes of the popular are black, it seems the barricades are still firmly in place. This is not to deny that Newland has achieved major cult status and critical acclaim through his translation of black music and youth subcultures into the European tradition of the novel. Indeed, it is this process of generic and thematic transposition that helps explain the vibrancy and impact of his work for regular audiences on both sides of the Atlantic, and which informs what we have already seen is his mood for memory-infused images of modernity. As R. Scott Heath describes it with reference to Newland and his black British contemporaries: '[u]sing the same cut-and-paste methodology applied in hip hop production [where Newland began his career], these young writers have selected sections of nostalgia and sampled meaning to formulate revisionist notions of being at this technological juncture. This is a generation whose culture is clearly informed by their diasporic heritage but is in many ways removed from their families' various points of origin.'

Hip Hop music takes on a physical quality at the opening of Newland’s first novel, The Scholar (1997): like Bisto gravy, it snakes upwards through number 36, Denver House, ‘an unseen mist’. Among those the music twists and turns past are Sean and Cory, the novel’s protagonists: they are ‘brothers’ in one sense, but also destined for different worlds. Sean is the scholar of the title, a diligent, sober individual set for university. Cory, on the other hand, is caught up in an underground world of drugs and crime. These, it seems, are the stark alternatives on offer to those wishing to escape the claustrophobic deprivation of life on the estate. However, when Cory gets into trouble, the two worlds collide as Sean desperately tries to rescue his alter ego from destruction.

In The Scholar, Newland marks out the territory that he has since domesticated and made his own in subsequent novels and short fiction. His second novel, Society Within (1999) is set on the same Greenside Estate as The Scholar and trades in similar themes of underground black culture, music and criminality, albeit this time from the prevailing perspective of two female characters, Elisha and Valerie. The same might be said of the thematic concerns of his most recent novel, Snakeskin (2002). However, in this book there is a significant departure from the circumscribed ‘ghetto’ of the Estate, suggesting the author was feeling the same kinds of claustrophobia towards his own settings as many of his fictional characters. Snakeskin’s protagonist is Ervine James, a private investigator whose vision of the street furnishes the novel with a detached, outsider perspective missing in the more enveloped worlds of his earlier work. (Ervine James reappears in Newland’s more recent novella, The Dying Wish, 2006) Centred on the mysterious murder of a black female, Snakeskin forces Ervine to negotiate the extremes of far-right racism and the Nation of Islam in a narrative that plays knowingly with the genre of African American crime fiction.

Kwame Dawes has noted that these prevailing themes (crime, music and gang violence in the male urban ghetto) mean Newland’s writing is in thrall to African American culture and the 'fundamentally flawed premise that black American experience is the same as the black British experience'. For example, The Scholar, which is set in Hammersmith, carries the subtitle ‘A West Side Story’, a fact which signposts the author’s wider interests in stage and drama (e.g The Far Side and B is for Black), and inflects his local London with the New York of Bernstein’s popular musical. However, we have already seen how Newland's work engages in a specifically black British tradition, and it is striking that The Scholar has an epigraph from leading black British intellectual, Paul Gilroy: 'The Black experience in England is increasingly revealed to possess a certain uniqueness ...'. Beyond his own writing, Newland has played a key role in shaping a distinctively British black aesthetic through edited collections like IC3: The Penguin Book of New Black Writing in Britain (2000). Along with Mike Phillips and Diran Adebeyo, Newland's work is heavily indebted to the conventions of crime fiction, even as it reworks and unsettles those conventions to accommodate a black British perspective, 'reversing', as Andy Wood has put it 'the dominant stereotype of the black male as criminal "other'''.

Having read all my life and found it a great source of pleasure, one thing had always bothered me - I never saw myself reflected in the pages of anything I read. This prompted me to write my first book and has kept me inspired to date! Telling untold stories keeps me alive.