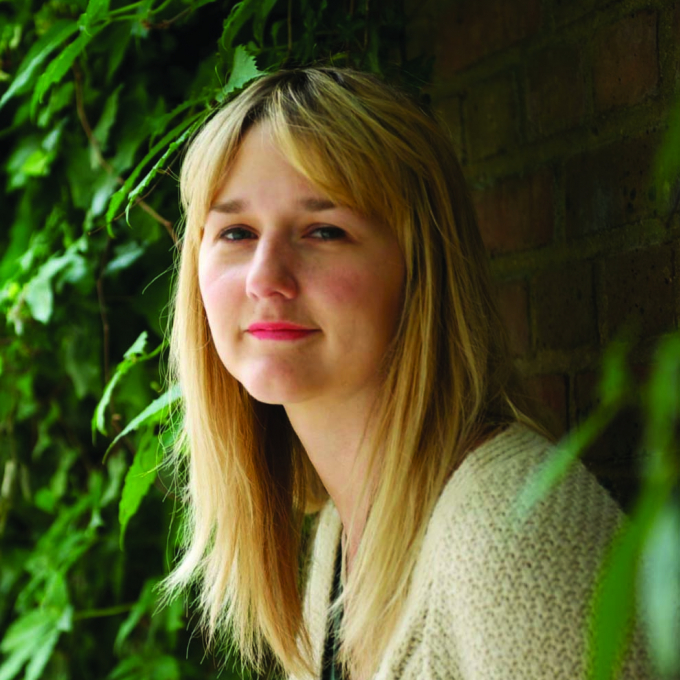 Clare Pollard was born in 1978, and studied at Cambridge University.

She was the recipient of an Eric Gregory Award in 2000.  Her first poetry collection, The Heavy-Petting Zoo, was published in 1998 and her second and third collections, Bedtime and Look, Clare! Look!, were published in 2002 and 2005 respectively. She has also presented two television documentaries, one for Channel 4 with verse commentary. Her first play, The Weather (2004), was staged at the Royal Court in Autumn 2004, and her documentary for radio, My Male Muse (2007), was a BBC Radio 4 Pick of the Year.

Clare Pollard lives in London and is a Royal Literary Fund Fellow at Essex University. In 2009 she edited an anthology of new poetry with James Byrne: Voice Recognition: 21 Poets for the 21st Century (2009), and since 2017 she has been editor of Modern Poetry in Translation magazine.

Her latest collections of poetry include the Poetry Book Society Recommended Changeling (2011), Ovid's Heroines (2013) and Incarnation (2017).

In Clare Pollard’s early poem ‘Burn Brighter’, the poet is seen as an alchemist, and ‘even the most sordid and hopeless hurts / can be licked a scalding gold’.

This is, roughly speaking, what her writing does. One might simplistically think of her as the best-known ‘bad girl’ among current British poets, a counterpart to the likes of Julie Burchill, or even the artist Tracy Emin to whom she alludes in the jaunty rhyming tour of ‘My Bed’: ‘Admittedly, it’s not in the best taste, / but self-promotion must be in-yer-face’.  Pollard’s poems, in The Heavy-Petting Zoo (1998) and Bedtime (2002) have numerous references to sex, binge drinking, some profanities, and, more thoughtfully, register the addictive nature of the consumer society. (A recent vehement article in The Idler magazine was headlined ‘Sick of Shopping’, and in it she confessed to being ‘a bit of a hippy’). She is actually a clever and skilful writer, whose work enacts both a fascination with popular culture, especially television programmes, and a satirical view of its excesses.

She has herself begun to step outside the poetry world, and has presented television documentaries, one with a verse commentary. And her play The Weather (2004) was performed last year at the Royal Court Theatre in London. The critic Michael Billington, writing in The Guardian, compared it to Bunuel’s film The Discreet Charm of the Bourgeoisie, calling it an account of a family’s disintegration set against a background of social anarchy. Bombs explode in shopping malls, and there is violently unpredictable weather. Meanwhile, an angry daughter confronts her parents, poltergeists send toasters flying through the air and obscenities are scrawled on walls.

Pollard was precocious in being chosen as one of Poetry Review’s ‘New Poets of 1996’ at the age of only 16, and most of the poems in her first full collection were written while she was still at school. A reviewer of The Heavy-Petting Zoo in The Times remarked that she wrote authentically ‘out of the excited anxieties of female adolescence: its quixotic hopes, its merciless bitchiness’. Selima Hill welcomed the book as being raw, reckless and ‘bloody-minded’. Some critics invoked the influence of Sylvia Plath, but, at least early on in her work, there is an inescapably Larkinesque note to be heard, in poems lamenting the disappointments of life, and especially in love relationships. After lengthily describing a drunken night out of missed opportunities, ‘Friday Night at the End of the Millennium’ (its title clearly a Larkin echo) concludes: ‘Its sad. / Like spilt lager. /  Like the taxi ride home’. She is essentially an observer, observing her own and other people’s hangovers and failed love affairs with what one critic called ‘appalled and embittered tenderness’.

The poems are very vivid in laying bare the foibles of youth. The scenario of its title poem, for instance, is that ‘It’s your best friend’s 16th birthday party’; drinking and sexual jealousy leave the narrator blaming herself, for ‘floundering in your own sour / vinegar juices, like a sick terrapin’. Love is the drug of choice, most desperately in the strains of ‘Poem for My Future Love’: ‘I want to fall in love so hard it bruises. / I want to fall in love so hard it scars’. It ends on a pathetic note, ‘waiting for the love that I deserve’. Pollard sends up the male of the species with satirical humour rather than pathos. The disappointed male student in ‘Fresher’, had anticipated having ‘girls with nipples / big as the bottoms of beer-bottles’, and mates who would scrape ‘illicit powders’ with his student union card. ‘The Last Love Poem’, which ends the book, is also its most impressive, combining raw feelings with considerable inventiveness. It takes the form of a passionate renunciation of a two-year love affair: the woman speaker’s venom is interspersed with quotes from The Bible, a sex manual, a Beatles song (‘I Feel Fine’) and other pop lyrics (‘To Know know know him is to love love love him’), ending with The Waste Land’s ‘Shantih’. Love is a fake, she concludes, ‘whatever the hell you think you’re feeling’; meanwhile, she is drinking provocatively-named cocktails (‘Long slow screw. /  Multiple orgasm. Slippery nipple’).

A dreamy photograph of Marilyn Monroe in bed adorns the cover of Bedtime. Very noticeable is the sheer number of poems taking the voices of female partners of the notorious. In ‘The Crimes of Love’, for instance, we meet Mrs de Sade, and Eva Braun in ‘The Bunker in Berlin’, Shakespeare’s ‘Dark Lady’, and a model ‘Posing for Dante Gabriel Rossetti’: ‘my hair splattering the pillows like coughed-up blood’. These rather stagy works give way to more engagingly satirical contemporary scenes, as in ‘Buying Manhattan’. A visit to New York at the time of the 2000 U.S. election (‘I’m the Prez says Dubya’) is recounted with mixed reactions to consumerism, its stores and brand names. Her women are still having difficulties with men, or suffer from the ‘Fears of a Hypochondriac Insomniac’; there is the usual heavy drinking, giving a ‘sangria-soaked head’ during a holiday where ‘we will remain as foreigners’. ‘Hometown’ revisits the clubbing scene, where there are ‘imprints of her knees beside toilets, / disco globes caked with last year’s tears’. The most creepily memorable works contain the monologue confessions of murderers. ‘The Black Widow’ has a husband with ‘conventional’ tastes: ‘a black, leather mini-skirt that made my butt look / like two cockroaches mating’. And with appalling poignancy, a ‘Letter from a Father’ is intended for his estranged wife: ‘you said I’d never see my lovely boys. / Death is a man, he will give me my dignity. / God is a man, and a father, and he will understand’.

The most interesting developments in the book are her wider questionings, some even spiritual in nature, and her sharper social satire; she is now ‘Thinking of England’. One piece lists complaints, and feeling guilt at being ‘educated, middle class, housed, well. / I am fat and rich on history’s hell’. But it ends by feeling ‘not just gratitude, but pride’. In ‘Post-‘, she asks: ‘why do we poets keep cranking it out: love, death, / lovers, mothers, nature – all of hackneyed humanity?’. Even if the belly sickens, another piece muses, ‘the heart is never full. / The heart’s a tyrant that won’t tolerate a lull’. The book ends with a funny and risqué 4-liner (after Wendy Cope), comparing ‘Bloody men’ to ‘bloody cigarettes - / A habit you swear you’ll crack’. Her poem ‘The Big Five-O’ was recently commissioned to mark fifty years of the Poetry Book Society. Characteristically, Pollard interprets such an anniversary personally, stating ‘I used to think that age would bring contentment, / a sense of things complete’. But (and there is always a ‘but’ around the corner in her work) at half that age she is ‘alarmed by / by things still undone’. She concludes that ‘Everything is still to be said’. Clare Pollard’s work has said a lot already, and it is bound to attract even more attention in the future. 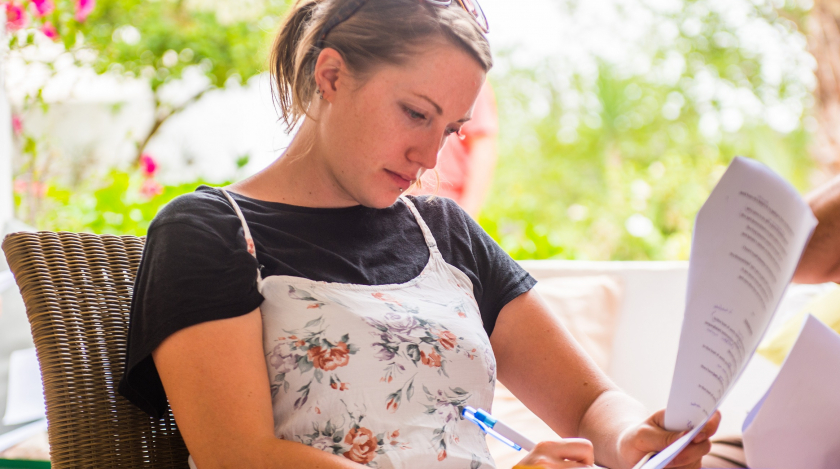 Poet and editor Martha Sprackland writes about her experiences at the Majaaz Poetry Translation Workshop in Tunsia last month. The workshop, run in collaboration with Modern Poetry in Translation magazine, brought together 5 young British poets, and 10 young poets from across the Maghreb, to translate each other’s work at a residential workshop at Villa Ma’amoura, Nabul, Tunisia.