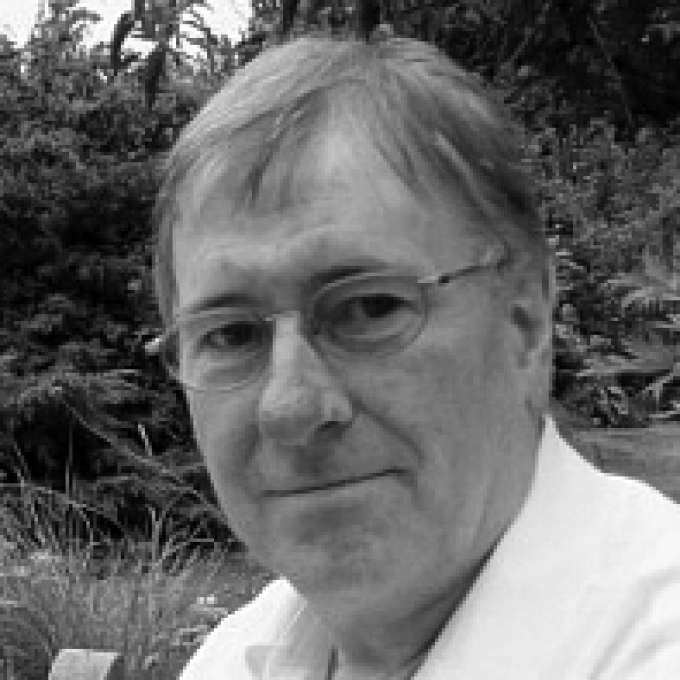 Christopher Priest was born in Cheadle, Greater Manchester, in 1943. He began writing soon after leaving school. His published career began with a series of short stories and other pieces that appeared in various outlets from the mid-1960s onwards. This a form he has continued to pursue alongside his novels and occasional non-fiction work, which has included critical works, biographies, and writing for children.

His first novel, Indoctrinaire, was published by Faber and Faber in 1970, beginning a stretch of two decades during which Priest’s novels appeared almost biennially. 1972’s Fugue for a Darkening Island saw Priest nominated for the John W. Campbell Award. His third novel, The Inverted World (1974), won Priest the first of his four BSFA (British Science Fiction Association) Awards. In the mid-1970s he was an associate editor of the UK semi-academic journal Foundations, which provided a distinctive platform for the criticism and popularization of science fiction at a time when the genre was not well established in the academy.

Priest picked up BSFA nominations for The Affirmation (1981) and The Glamour (1984), a period of success also marked by his appearance on Granta’s list of Best of Young British Novelists in 1983. The same decade saw Priest embark on pseudonymous writing, issuing in 1986 two film tie-in novels: Short Circuit as Colin Wedgelock, and Mona Lisa as John Luther Novak, the only two pen names under which Priest has admitted authorship. A tie-in to David Cronenberg’s eXistenZ appeared under the pseudonym of Novak in 1999.

Priest 1995’s epistolary novel The Prestige was a popular breakthrough. Winner of the World Fantasy Award and James Tait Black Memorial Prize, and nominated for the BSFA and Arthur C. Clarke awards, it was adapted into a film directed by Christopher Nolan, released to acclaim in 2006. The Extremes (1998) won the second of Priest’s BSFA Awards, a feat repeated again by 2002’s The Separation (which also won the Clarke Award) and 2011’s The Islanders (winner also of the Campbell Award).

Priest has also written drama for radio and television, and he has contributed features and reviews to a number of magazines and newspapers, including The Times, the Guardian, the Independent, and the New Statesman. He is Vice-President of the H. G. Wells Society, and he has won several awards abroad, including the Kurd Lasswitz Award (Germany), the Eurocon Award (Yugoslavia), the Ditmar Award (Australia), and Le Grand Prix de L’Imaginaire (France). In 2001, he was awarded the Prix Utopia (France) for lifetime achievement.

Priest’s recent novels include The Adjacent (2013) and The Gradual (2016). He lives in Hastings, with his twin adult children, Elizabeth and Simon.

In a career that has spanned six decades, Christopher Priest has assiduously resisted being typecast. In the words of one reviewer, he has been able to achieve this chameleon-like evasiveness by using ‘genre conventions to undo the conventionality of genre’. In his work, Priest takes the ‘potentially stale metaphor of art as conjuring trick and making it new by imaginative precision’.

One of the hallmarks of science fiction (SF) is precisely the verisimilitude of its created worlds. Stephen Burt has observed how in SF ‘the promise of wonder and strangeness comes together … with the promise of logical laws’. Yet such unexpected convolutions of reality and fantasy can yield striking effects. In moving beyond the conventional bounds of fiction, to imagine how things might be in future or alternative worlds in which different logics operate, SF takes its often potent charge.

Priest’s early novels firmly established his credentials as an adept craftsman of what has been described as Genre SF, which is to say the kind of writing that is conscious of working within a particular set of acknowledged habits and conventions. Yet Priest has always sought to subtly subvert those conventions. In revealing his imaginative debt to J. G. Ballard and Franza Kafka in his first novel Indoctrinaire (1970), in which the central protagonist struggles to ‘make sense of his position or condition’, Priest offers a metaphor for his own authorial insistence on elaborate techniques of cunning and deception. These fictional strategies are ones on which he has continued to build throughout his career, to often stunning effect.

Priest’s second novel Fugue for a Darkening Island (1971) builds on one of the key traditions in British science fiction, that of the ‘disaster’ or ‘catastrophe’ novel. Martin Amis described it at the time as a ‘bleary view’ of a fascist England, a ‘nightmare vision’ that Priest imagined of a country if it were to fall victim to the sort of violence that was erupting in Northern Ireland in the early 1970s. The ‘fugue’ of the title reflects both the novel’s contrapuntal broken-up narrative sequence, and the psychological phenomenon that is characterized by dissociation of identity and perceived instability of one’s environment.

Patrick Parrinder has noted how Fugue participates in the ‘grand tradition’ of the British island novel, sharing with such dystopian works as Ballard’s urban disaster novel Concrete Island and Hugh Kenner’s A Sinking Island a prevailing mood of despair and terror. The island motif is one that has frequently reappeared in Priest’s work, from his first establishment of the ‘Dream Archipelago’ in 1981’s The Affirmation, and the extension of this imaginary conceit in a collection of short stories under that title in 1999. Priest’s most recent novel, The Islanders, immerses the reader in this ‘evanescent realm’. In this, he shares in a long tradition in SF of creating the sorts of imaginary worlds that, as Michael Saler puts it, ‘are so realistic they assume a life of their own, inspiring prequels and sequels, as well as histories, concordances, gazetteers and atlases’. Yet Priest consistently exceeds these inert boundaries, to ‘artfully confuse’ rather than to simply expose to fantastic ‘other worlds’.

In his introduction to Inverted World, Adam Roberts describes the ‘extraordinary conceit’ that governs the novel, ‘worked-through with efficient elegance via a coming-of-age story’. The ending, which is itself ‘an inversion, a twist and a surprise’, Priest ‘orchestrates with restraint’. It is with such accomplished skill that Priest builds on what Roberts call ‘one of the most elevated high-concepts in all SF’ — the inversion of the idea that we live on a finite world in an infinite universe. ‘Priest asks: what would it be like if that state of affairs were the other way round? What would existence be like on an infinite planet located within a finite universe?’ Inverted World thus introduces one of the major themes of Priest’s work, the notion of the difficulty of escaping from tangled and intricate puzzles and situations, psychic and physical. In this, he distinguishes himself from an influential trend in classic SF which valorizes the idea of escape. ‘One of the key inversions’ that Priest achieves, Roberts argues, ‘is the upending of that aesthetic; is the refusal to pander to fantasies of escape’.

These labyrinthine constructions are effected by the use of such techniques as unreliable narrators, even by casting the author himself in the narrative. These figures cast doubt not only on the coherence of their own perspective, but of the multiple perspectives encoded within the physical and psychological territories of characters and locations. Priest’s ‘Dream Archipelago’ is an exemplary instance of the possibilities of such complexity. As it is laid out in The Islanders, it spans a topography unmappable by objective observers, owing to a ‘temporal vortex’, and the denizens of surrounding lands make use of ‘psychosis-inducing gases’ to confuse the archipelago’s residents. As one reviewer has noted, unlike the ‘empirical trappings of modern imaginary worlds’ that can be ‘so seductive that they outweigh explorations of character or the ambiguities of existence’, Priest grounds his imaginary worlds so effectively that it opens up ‘different interpretations without being merely estranging’.

Here and elsewhere, Priest draws on the possibilities of the very art of fiction to draw broader points about human experience. As one reviewer notes apropos of his 1981 novel The Affirmation, Priest implies ‘with distressing plausibility’ that ‘the human tendency to make stories is itself a kind of madness’. For in this particular novel, Priest does not use the hallucinations of his protagonist as a simple ‘figure for schizophrenia’, nor does he take it as an opportunity to merely construct the ‘sort of self-regarding metafiction that evaporates into a comment on its own evanescence’. Rather, he highlights ‘the power of narrative to steal reality’; ‘affirming nothing, it abandons us mid-sentence, poised between page and world, discomfited and hyper-aware’. The coherence of our minds is troubled no less than that of the fictional worlds he fabricates.

Like the protagonists of his 1995 novel The Prestige, who are literally conjurors, Priest is a master of upending expectations. He is able to achieve these profound and rewarding effects precisely because he creates apparently reassuring realities with such adroitness and imaginative persuasion.