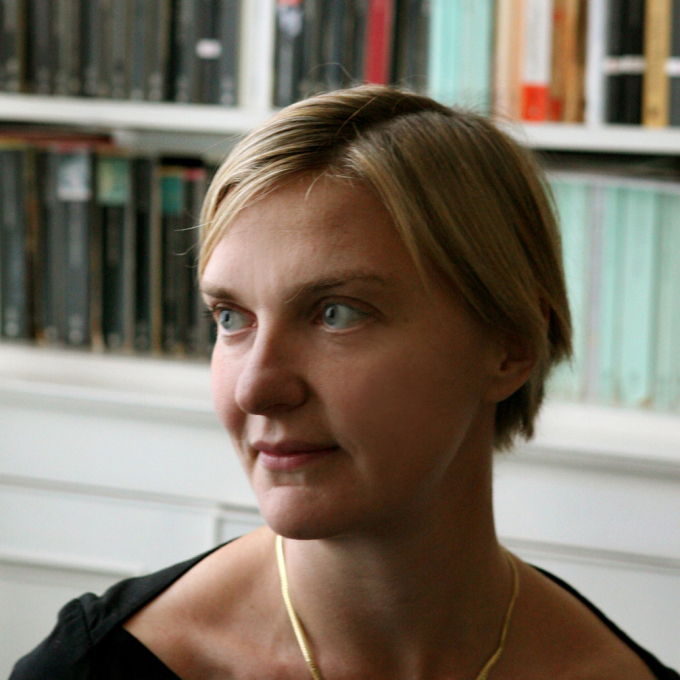 Charlotte Higgins was born in Stoke on Trent in 1972 and studied Classics at Balliol College, Oxford. She is a blogger and chief arts writer for the Guardian, contributing to its news, features, op-ed, literary and cultural coverage.

Higgins is the author of three books on aspects of the ancient world. Her first was Latin Love Lessons (2009), followed by It’s All Greek to Me (2010).

The most recent, Under Another Sky: Journeys in Roman Britain (Jonathan Cape, 2013), was shortlisted for the Samuel Johnson prize, the Thwaites Wainwright prize, the Hessell-Tiltman prize and the Dolman prize.

Her fourth book, about the beginnings of the BBC, This New Noise: The Extraordinary Birth and Troubled Life of the BBC, was published in 2015.

She lives in London. She is a regular contributor to BBC radio and in her spare time plays violin.

Best known as arts editor of the Guardian newspaper, Charlotte Higgins has recently embarked upon a successful second career as an author of well-received books that have injected popular life into the classics.

By doing so, she has triumphed in a field both demanding and crowded. As the Scotsman has said of Higgins’s books, “Good non-fiction is rare: to be enlightening but not patronising; idiosyncratic but not quirky.” And in pulling off this fusion, Higgins has joined the select company of other evangelists for the classical world such as Bettany Hughes, Harry Mount and Mary Beard, and found a new audience.

Higgins is passionate about what deeper engagement with the ancient world can teach us. A classicist by education, she argues that the value of a grasp of the ancient world lies not in anything as reductive as utility but the new ways it can make us thinking about the modernity that surrounds us. Asked whether she sees it as a vocational subject, she replies, “to hell with that – it's a portal through which you can see a whole world".

Part of her aim is also to breach the social stigma surrounding this subject, especially in British culture. As she ruefully observes:

'The classics and class have always been uncomfortably linked. In this country's education system, knowledge of the classics was traditionally the gatekeeper of privilege. If you acquired the classics (even as a humble stonemason's son, like Thomas Hardy) you gained a passport to the establishment.'

Yet, by removing all traces of the languages, history and culture of the ancient world from most modern education, Higgins believes, “the baby has been thrown out with the bathwater.” Her three books on the legacy of Greek and Roman civilization have therefore sought to repair public misconceptions and prejudice and share what is inspiring and illuminating about the distant past.

Her first step on this quest was her 2009 book Latin Love Lessons, in which she breathed new life into antique romantic poetry. “What can a bunch of 2000-year old poems in Latin teach us about love in the twenty-first century?” she asks as the book opens, before answering: “actually, pretty much everything.” And the rest of the book serves to elaborate on her point.  Taking in the steamier moments of Ovid, Horace, Catullus and Virgil, snippets of sensuous verse are filtered through a healthy dose of analogies to popular culture, in order to reveal the timeless insights about matters of the heart.

The result was well received by critics, who responded well to her lightness of touch.  “Who wouldn't want Ms. Higgins as their Latin mistress?” asked The Times. To Time Out, it was the “light touch” and deft “sense of humour” of Higgins’s survey that made it “a delight to read. It’s as useful to an A-level Latin scholar as it is to anyone who has ever fallen in love.” To Mary Beard, the guiding light of popular coverage of this area, the book was “engaging and sometimes very funny,” but she cautioned readers of the TLS that they should “hesitate before” embracing wholeheartedly any image of the sometimes savage and violent Roman past as simply “wonderfully appealing [and] delightfully libertine.”

Higgins’s next book was nominally entitled It's All Greek To Me (2010) but its subtitle told the real story: From Achilles' Heel to Pythagoras' Theorem: How Ancient Greece Has Shaped Our World. It offered what Higgins termed “a bluffer’s guide to understanding Greek culture and history.” Covering a wide range of cultural phenomenon, from poetry to drama, history to philosophy and politics, the book made clear how profoundly the rich inheritance of the Greeks truly is, and how its influence on our age continues to be felt.

“Every generation needs to rediscover the Greeks,” observed Philip Pullman in his praise for the book’s synthesis, something that Higgins had made possible “with a directness and clarity that’s enormously engaging.” The Telegraph accurately described the book as “Charlotte Higgins's love-letter to ancient Greece,” finding that she mostly achieved the difficult trade-off between passion against informative duty.

It was with her third book, however, that Higgins achieved her most assured balance, and found her most authentic voice. Under Another Sky: Journeys in Roman Britain (2013) managed to weave biography and memoir into her now-familiar brand of classical popularizing, in search of what little remains of the Roman Empire’s most northerly outpost. As a result, she managed to broaden her remit whilst retaining the contagious enthusiasm of her first two books. Roman Britain, she observed, often feels like "an alien, irrecoverable place … too jagged and unsettling and ambiguous to be pulled into line".  But in the company of her partner Matthew in their VW campervan, she lit out for the territory in order to find out what sense could be made of the skeletal ruins.

It was in part a book about how a remarkably small number of Romans first imagined, and wrote about, these distant and exotic islands. But just as importantly, this was a book about the afterlife of Roman Britain. What have those ruins meant to those came after that province fell. What have these lost memories meant for those who made their lives around them afterwards? Answering such questions took Higgins through the reflections of the Geoffrey of Monmouth, the medieval historian, the composer Edward Elgar and poet W.H. Auden. Staring out at the “grey and corrugated sea,” at the book’s plaintive coda, Higgins manages to transform ideas of ‘Roman Britain’ into crucial concepts at a time when the United Kingdom itself seems to fragmenting, politically and culturally.

It was to prove her most widely acclaimed book to date, and it impressed critics particularly with its ambitious fusion of genre. The Sunday Times read this “delightful, effortlessly engaging” work as a “kind of travel guide, but in the same way that WG Sebald's The Rings of Saturn is a travel guide to Suffolk … lyrically alive to the haunting presence of the past and our strange and familiar ancestors.” Similarly, the TLS saw in Higgins’s method traces of the “gritty sensibility of contemporary urban tourists … [such] as Higgins follows Iain Sinclair and Owen Hatherley,” and thought that it amounted to “an invigorating tonic against barbarian forgetfulness.”

Others simply saw Higgins’s Roman excursion as marvelously edifying fun. In answering the question of what the Romans did for the British, the Telegraph thought that Higgins did well to avoid “the usual Monty Python list,” providing us instead with a more “sophisticated” answer, “in her gentle, fine prose, she suggests convincingly that Britain was thoroughly changed by its two Roman invasions, and that modern Britain is still built on a Roman skeleton.” The Scotsman praised this “charming, intriguing and not-infrequently elegiac book” concluding that, “most impressive here, rather than either the erudition or the endeavour, is simply the writing … this is not a journalistic book. It is a writerly book.”

The book was shortlisted for the Samuel Johnson Prize for non-fiction, the Thwaites Wainwright prize, the Hessell-Tiltman prize and the Dolman prize. It provided evidence that Higgins’s second career had evolved from that of a quirky classicist into a versatile historical commentator of increasingly broad appeal.  Her most recent project has been a long series of provocative special pieces on the crisis at the BBC for the Guardian, soon to be published in book form.

2015
This New Noise: The Extraordinary Birth and Troubled Life of the BBC
2013
Under Another Sky: Journeys in Roman Britain
2009
It's All Greek to Me
2007
Latin Love Lessons: Put a Little Ovid in Your Life

@chiggi @EvelynWilcock @BBCRadio3 It was a rhetorical question!
(1 days ago)

@chiggi @HouNorman @BBCRadio3 Nooooo! We need Building a Library. I am not, nor ever have been, building a record library b… https://t.co/zciVtXalO6
(1 days ago)

@chiggi Maybe it's a deliberate tactic to make us all realise how awful it would be if the morning @BBCRadio3 schedule (mut… https://t.co/6TopexAGVu
(1 days ago)