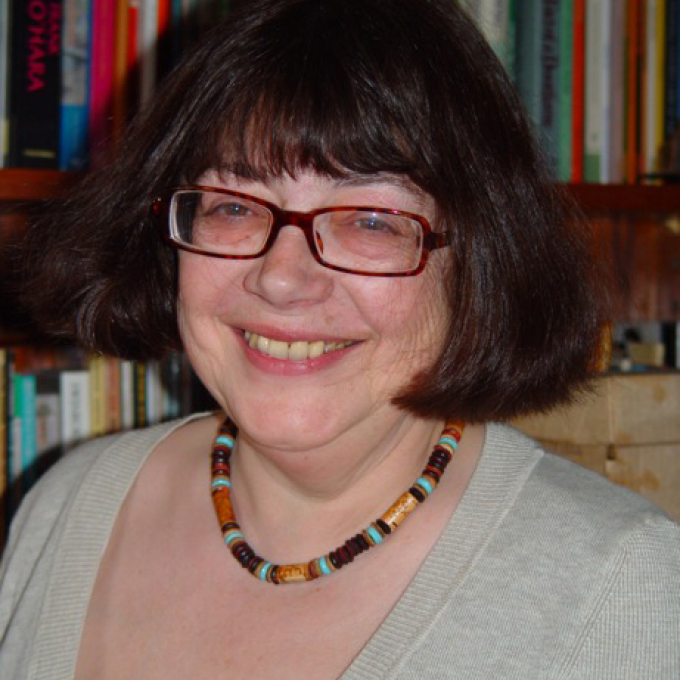 She won a scholarship to grammar school and later studied Philosophy at London University, but left before completing her degree. She gained a Postgraduate Diploma in Writing for the Stage (with Distinction) from Manchester City College in 2001. She has held the following posts: Writer in Residence, University of Kent at Canterbury (1983-5); Northern Arts Literary Fellow (1988-90); Poet in Residence, Queen's University, Belfast (1991-3) and University College Cork (1994); Writer in Residence for the British Council, University of Stockholm (Spring 1999); Creative Writing Tutor, Queen's University, Belfast (1995-8). She was Poetry Editor for the publisher Quarto (1982-4) and the Literary Review (1984-8). She began publishing music reviews at the age of 16 and has since contributed literary journalism to a wide variety of periodicals and newspapers. She is currently Professor of Creative Writing at the University of Hull.

Her first poetry collection, A Strange Girl in Bright Colours, was published in 1973. Other collections include Unplayed Music (1981), joint winner of the Alice Hunt Bartlett Prize; Star Whisper (1983); Direct Dialling (1985); The Greening of the Snow Beach (1988), inspired by a visit to Moscow; From Berlin to Heaven (1989); and Holding Pattern (1998), shortlisted for the Belfast Arts Award for Literature, in which she wrote about her experiences living in Northern Ireland. Recent poetry titles are Hex (2002), Selected Poems: 1968-2004 (2004), Blind Spots (2008) and De Chirico's Threads (2010), which includes a verse-play based on the life and work of Italian painter, Georges De Chirico.

She is the author of a novel, Plato Park (1987), the story of a love affair between a Russian journalist and an English woman, and is editor of Making for the Open: The Chatto Book of Post-Feminist Poetry 1964-1984 (1985) and New Women Poets (1990). She has had three plays produced: Nearly Siberia (Pascal Theatre Company, Newcastle and London, 1989), The Freak of the Week Show (EyeSpy Theatre Company, East Didsbury Studio, Manchester, 2001) and Suzanne Hecabe (Arden School of Theatre, Manchester, 2002).Her translations, made from the Russian in collaboration with Yuri Drobyshev, are included in Pencil Letter by Irina Ratushinskaya (1988), The Poetry of Perestroika (1990), After Pushkin (2000) and Yevgenii Rein: Selected Poems (2001). Carol Rumens is a member of the Society of Authors, a member of the Welsh Academy, and a Fellow of the Royal Society of Literature. Writing Poetry was published in 2006 and Self into Song, a book of lectures given at Newcastle University, in 2007.

Described by Anne Stevenson as a writer ‘who retains her feminine voice but extends her sympathies beyond feminism’, Carol Rumens is perhaps the only contemporary female poet to have drawn obvious inspiration from the works of that most caricatured of male poets, Philip Larkin, whom she has admiringly described as ‘the great musician of his generation’.

Larkin’s characteristic style – demotic and conversational yet literary and formal, resignedly aphoristic while often deeply affecting – is evident from the opening poem of her debut collection, A Strange Girl in Bright Colours (1973), where ‘quietly the sky measures / the lengthening days // […] say[ing] nothing // about hopes or rewards’ and where ‘newness is terrifying’ (‘Prologue’). But even Rumens’ earliest work is far from blandly imitative, blending this hardy British realism with European elements and, in particular, arresting imagery and symbolism reminiscent of Sylvia Plath. So ‘Prologue’ ends: ‘O lonely month / with your hard frosts and soft tears, // you tap and won’t be silenced. / You demand action – // a deed, a commitment, / a wound to be root-filled. // Like this shiver of catkins / I hang these words upon you’. It is this productive tension between disparate poetic styles that has enabled Rumens to write some genuinely memorable verse, that which the critic Gerard Woodward has rightly described as ‘syntactically complex, discursive, lyrically rich, yet threaded through with a demotic swagger’.

Born in 1944 in Forest Hill, South London, Rumens lived for a number years in Belfast before moving to Bangor, South Wales, and is currently Professor of Creative Writing at the University of Hull. She has also travelled widely in Russia and Eastern Europe. As with Larkin reflecting on his time in Belfast as emphasising ‘the importance of elsewhere’ – a place that served to reaffirm his Englishness – Rumens has found foreign customs, cultures and languages the source of much poetic inspiration, but one which has arguably provoked a more complex, liberated response: ‘a new city street-plan’, as the narrator puts it in ‘A Hiccup in the History of Belfast’ from Holding Pattern (1998), where ‘names / Try to slip through the pages incognito, / Blending with the crowd’. This fascination with elsewhere has also encouraged her to publish many Russian translations, including a version of Pencil Letter by Irina Ratushinskaya (1988), The Poetry of Perestroika (1990), and Yevgenii Rein: Selected Poems (2001).

Rumens’ early poetry collections, however, more commonly take the feminine, domestic and local as their most ubiquitous themes. In many cases, this makes for some remarkably candid and assured poems, as in ‘Menopause’ from A Strange Girl in Bright Colours, something which the poet figures as ‘the dud season / set between extremes, / when the travel agent prints // red skies, gold skins / on the flat eye of the future’. Unfortunately in other poems, a more obvious political agenda and bias abandons subtlety in favour of opinion and instruction, as in ‘The Housewife’s Manuscript’ from A Necklace of Mirrors (1978), or ‘Song for Puberty’ and its ‘Girl upon history’s doorstep // […] with her borrowed name’. It is Unplayed Music (1981) and Scenes from the Gingerbread House (1982) that represent the best of Rumens’ early work, then, revealing an often moving anecdotal poetry of ordinary lives. ‘First Loss’, for example, tells with emotion but without sentiment the terrible story of a baby that dies recovering after minor surgery, how ‘the child lay burning / in woollen hat and mittens – / too late. The sharp autumn / had already sunk its knife’. In ‘Secrets’ and ‘Misjudgements’, vivid childhood memories are similarly captured in crisp, often unusual images and sparse, elegant language.

Alongside international linguistic and cultural ‘otherness’, European history has also shaped Rumens’ poetry since the mid-1980s. In the eerie ‘A Cold Dawn’ from Star Whisper (1983), for example, ‘the sky that drank its bitter greenness / from the waters of Gdansk Bay // […] is the sky of the world’, ‘its forehead smeared by faded sacrifices of industry’, haunting images that return as ‘the sky rush[ing] in like sea’ in the risky sequence ‘Outside Oswiecim’ from Direct Dialling (1985), a Holocaust poem which John Greening described in the Times Literary Supplement as Rumens ‘tackling the twentieth century’s darkest hour […] and doing so with authority’. The most accomplished and engaging of these poems, however, is perhaps ‘The Flood of Silence’ from The Greening of the Snow Beach (1988), one of many deftly formal poems that blend Russian literature and history to impressive effect, in this case, in an elegy for the great Russian poet, Alexander Pushkin:

‘I think how silence spreads its rivers
Over unstable, swampy banks;
Even the bronze-wrapped horseman shivers
As bridges float away in planks.
A wave shins up a lamp-post’s rigging;
First doors, then balconies are swigging
The muddy water, then the chimes
Of plump St Isaac’s; on it climbs…
Miraculously, we can hear you
Still, as if you were a bird –
Art with an olive-sprig – absurd
Image that surely fails to cheer you
As you gaze out of Leningrad,
Your mausoleum, huge and sad.’

The Greening of Snow Beach was followed by Thinking of Skins: New and Selected Poems (1993) and Best China Sky (1995), Rumens’ best-known and widely admired volumes, containing as they do her most memorable and accomplished poems to date. Through a combination of her demotic language, eye for the contemporary, often wicked sense of humour and abiding interest in gender, class, and foreign cultures and histories, these poems – including ‘The Impenitent’, ‘Prayer for Belfast’ and ‘Stealing The Genre’ – are by turns darkly comic, wryly intelligent, and dynamically conversational while retaining a musical formalism. ‘Stealing The Genre’, for instance, may seem like a lesbian love poem at first glance, but closer reading reveals the subversive literary experiment that lies behind this, inverting the Irish aisling or ‘dream vision’ in which a male poet personifies Ireland as a woman: ‘the dark all flame as I drank / The heart-breaking odour of Muguets des Bois and red wine – / Hers, though I have to admit, it could have been mine’.

Rumens’ latest poetry collections are Hex (2002) and Blind Spots (2008), in between which her Selected Poems: 1968-2004 (2004), Self into Song: Newcastle/Bloodaxe Poetry Lectures (2006) and guide book Writing Poetry (2006) were published. Hex is a somewhat more personally contemplative book than previous work, often reflecting on Rumens’ writing to date, as in ‘The “Pastime” School of Poets’, where ‘poems […] whisper / if poems don’t hurt us, are they truly poems?’ It also takes stock of the presiding influences within Rumens’ work, from ‘the Black Mountain foundries or / night brilliant power stations in the depths / of Europe’, to the deliciously playful dialogue between poet and Sylvia Plath in the sonnet sequence ‘Letters Back’, giving the latter a posthumous voice that is both humorous and engagingly flippant: ‘Dear Carol, I’m inclined to think you’re bats. / But then I hear you’ve lately moved to Wales / And teach Creative Writing and keep cats: / Sorry to take the wind out of your sails – / Or should I spell that ‘sales’?’ Blind Spots, on the other hand, continues Rumens’ ongoing engagement with often wildly varying poetic styles and master poets, including a substantial sequence, ‘Thinking about Montale by the River Hull’, a series of improvisatory versions from the Italian that engage with the poet’s personality as much as the poems themselves. In this sequence, the longstanding influence and presence of Larkin also appears in one poem as ‘large, desolate footprints’, allowing a productive tension that prompted Philip Gross, in his review of the collection in Poetry London, to state that ‘to relate to both [poets], dismissing neither, is an achievement and a clue to Rumens’ own poetic personality’. Indeed, it is this openness to the many ways in which poetry has been and can be written that energises Rumens’ poetry and lends it the bravado, assurance and inventiveness which places her among the front rank of contemporary poets writing today.

'[Writing] is a conversation - with my parents, with myself, with the living, with the dead, with friends, with strangers, and perhaps with words themselves.'