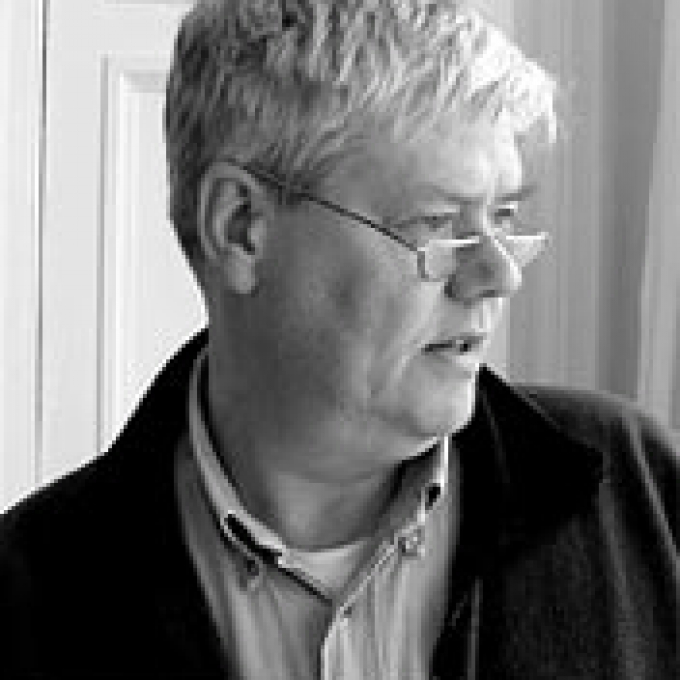 Bernard MacLaverty was born in Belfast in 1942, and moved to Scotland in 1975, where he lived in Edinburgh, on the Isle of Islay, and now in Glasgow.

After leaving school he became a Medical Laboratory Technician, later studying at Queen's University, Belfast and becoming an English teacher.

He is the author of the novels Lamb (1980); Cal (1983); Grace Notes (1997); and The Anatomy School (2001), set in Belfast in the late 1960s. Both Lamb and Cal have been made into major films for which he wrote the screenplays, and he has written various versions of his fiction for radio, television and screen. Grace Notes was awarded the 1997 Saltire Society Scottish Book of the Year Award and shortlisted for many other major prizes, including the Booker Prize for Fiction and the Whitbread Novel Award.

In 2003, he wrote and directed a short film, Bye-Child, after a poem by Seamus Heaney, which was nominated for a BAFTA (Best Short Film Award) and won a BAFTA Scotland (Best First Director Award).

Bernard MacLaverty, writer of fiction, was born in Northern Ireland and moved to Scotland in 1975.

Both of these places, and themes such as Catholicism, guilt and tension, inform his novels and short stories. He is also the author of two books for children and has written several screenplays. Before becoming a full-time writer, he worked as a laboratory technician and a schoolteacher.

His first published work, Secrets & Other Stories (1977), is a collection of short stories, and from this point MacLaverty has received strong praise for the finesse of his writing. With regard to a later collection, Matters of Life & Death (2006), for example, Anne Enright points out how this work holds echoes of his previous work: ‘Fans will recognise him in the details - the finer cuts of colloquial speech, his microscopic eye and an ear for noises off. All of this is anchored in personality; the distinctiveness of people being one of his great delights.’ (The Guardian, 6 May 2006).

His first novel, Lamb (1980), is, however, comparatively less aware of these finer details as it concentrates on the surrogate father and son relationship that begins to arise between Brother Sebastian, the school teacher and priest whose original name is Michael Lamb, and Owen, an epileptic pupil from the reformatory where Lamb teaches woodwork. Ostensibly, the plot is driven by Lamb’s decision to rescue this boy who has been maltreated by other adults.

In an interview for Contemporary British and Irish Fiction (2004), MacLaverty draws a parallel between the novel’s tragic conclusion and the violence in Northern Ireland in the late 1960s and early 1970s: ‘I waited ten years before I could write about the violence. I wrote about it in an oblique way in my first novel, Lamb, where Michael attempts to destroy the thing he loves in the same way that misdirected Republicanism was destroying the country.’ The narrative also returns intermittently to the symbolic Christian motifs through the course of the novel as both the man and boy represent Christ (as the reader learns that Owen is the Celtic for lamb). The tragic, sacrificial ending of Owen continues these parallels.

Both Lamb and Cal (1983), MacLaverty’s second novel, have been adapted for film. He wrote the screenplays for these adaptations as well as for Bye-Child (2003), which he also directed. This short film is based on a poem by Seamus Heaney. He is also given the writing credits for Elephant (1989), which was directed by Alan Clarke, and is believed to have inspired the title when he compared the continuing sectarian violence in Northern Ireland to having an elephant in the room.

This second novel is as emotionally perceptive as the first, but has the ‘Troubles’ in Northern Ireland as a dominant theme. The plot is driven by the love between the eponymous young Catholic man and the widow of a Protestant police reservist he helped to murder. Sacrifice and guilt are recurrent areas of interest once more as Cal is unable to come to terms fully with what he has done. His desire for punishment is a register of his Catholic heritage and a measure of the sin he has committed; but, the narrative also makes it transparent that Cal is another victim of his environment.

Following three further collections of short stories, which include The Great Profundo and Other Stories (1987), the well-researched novel, Grace Notes, was published in 1997. This latter work was highly acclaimed; it won the 1997 Saltire Society Scottish Book of the Year Award and was shortlisted for the Booker Prize for Fiction. Its construction and content are influenced by concepts of harmony and music and this musicality is channelled through the central character, Catherine McKenna, who is a composer.

The religious divides in Northern Ireland are once more at the forefront as Catherine attempts to re-negotiate her dead father’s hatred for the symbols of Protestantism. In the essay ‘The Novel in Ireland and Scotland’ by Gerard Carruthers, which is included in A Companion to the British and Irish Novel 1945-2000 (2005), the importance of Catherine’s decision to re-appropriate the sound of the drums of the Orange marches, which her father hated, is explained: ‘At the heart of the novel is the public performance in a converted church in Glasgow of Catherine’s composition incorporating the drums of the Orange Order, which her background ought to make her despise.’ Music offers the possibility of joy, as well as being an intended lament for past brutalities.

MacLaverty’s next novel, The Anatomy School (2001), is set in Belfast in the late 1960s and although still concerned with sectarianism in Northern Ireland, it differs from the earlier works in that it invokes humour more noticeably. The main character is a Catholic schoolboy, Martin Brennan, and his typical male adolescent worries are the main source of interest. Male adolescent friendships are focussed upon, as is sex and the anxiety of failing exams. In an interview with The Barcelona Review (December 2006), he explains that although this is not an autobiographical novel, many of the details such as the description of the school are drawn from his life and, of all his characters, Martin is the one that most resembles him. He then reiterates that this is not an autobiography, when he quotes a pupil he used to teach who described fiction as ‘made-up truth’.

Acclaim for MacLaverty’s writing continues, with Matters of Life & Death inspiring reviewers to compare him favourably with authors such as Chekhov, James Joyce and Graham Greene. This is a tender collection that also uses the horrors of violence to capture the attention of the reader. As with his previous novels and stories, MacLaverty continues to demonstrate the value he places on searching for emotional honesty. Looking back at his work, it is apparent that he has also accepted the political nature of writing. Throughout his writing career he has engaged with the long-term effects of British imperialism, the influence of Catholicism and the damage caused by sectarian violence.