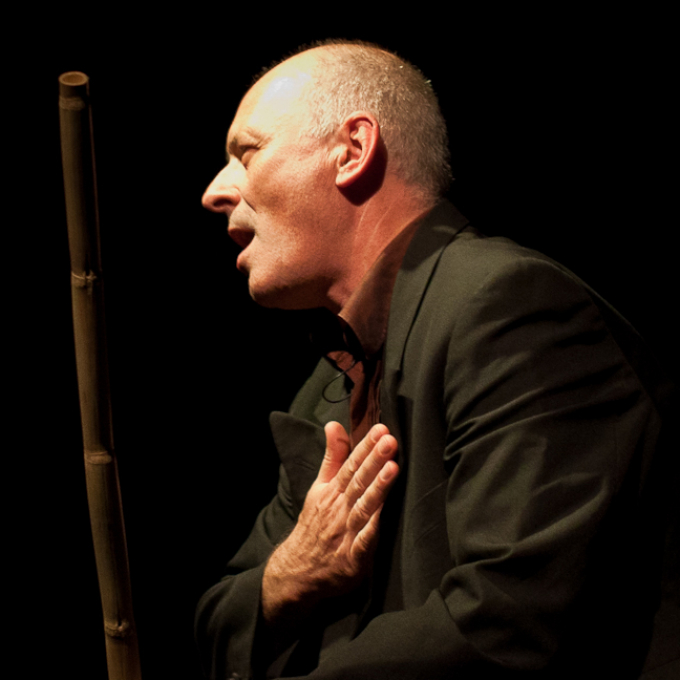 Ben Haggarty became a professional performance storyteller in 1981, having first worked as an 'image maker' with Welfare State International Theatre, then as a Theatre Director.

He has performed all over the world, and has a working repertoire of over 350 tales for both adult and younger audiences. He is particularly interested in Eastern European Wonder tales and Bronze Age and early Iron Age epics. His repertoire includes 'Gilgamesh', numerous Irish Myths and the modern myth of 'Frankenstein'. He is a skilled improviser, performing solo, with other storytellers and with musicians.

In 1985 he founded the Company of Storytellers with Hugh Lupton and Sally Pomme Clayton. From 1999-2001 he was Britain's first official 'City Storyteller' in Gloucester. Since 2001 he has been the official storyteller with Chinese-American cellist, Yo Yo Ma's 'Silk Road Ensemble.'

He established the Crick Crack Club in 1987, which provides events and workshops for adult audiences.

Ben Haggarty has worked with a number of large organisations, including The Barbican, The South Bank Centre and Shakespeare's Globe, and for various literature festivals. He makes a significant contribution to community projects, to museums and galleries, and also in education, in 1987-1992 being Consultant to the Schools Curriculum Development Council National Oracy Project.

His work has been featured on BBC Radio and Television, and in 2007 he was appointed Honorary Professor of Storytelling at Berlin's University of the Arts (UDK).

A graphic novel, MeZolith, written with Adam Brockbank, was published in 2010.

Some storytellers go back a few centuries to find new material – Ben Haggarty, however, goes some millennia further, ten in fact, to 'dig deeper and deeper into the very archaeology of the imagination', a necessary means by which, as he puts it, he can recover the truly important stories for modern audiences. Asked as to how many stories he had come across in his long career as a professional storyteller, Haggarty replied:

'There's a mentality that wants to reduce everything these days to six or seven basic stories. If you have ten people in a room and they're all telling the same story, you will have ten different versions because it speaks to different aspects of themselves. What I'm interested in is seeing how stories have travelled from really remote archaeological times to the present day; you find there are motifs and images that have always spoken to people, and what you can do is represent them in a way that has fresh meaning.'

With MeZolith (2010), Haggarty seems to have found that 'fresh-ness of meaning' – and has taken us right to the roots of his inspirations ; a supremely compelling Stone Age horror story, told through the form of a graphic novel. In the course of short, action-packed five-page episodes, MeZolith introduces us to Poika, a boy on the cusp of adulthood. The scene is 10,000 BC, on the western shores of the North Sea, a pre-insular Britain. Poika is a member of the Kansa tribe. The novel's plot revolves around this crucial year in Poika's life; we see him negotiate the trials of becoming a man, and take part in a hunt, where, in one instance, he is almost fatally wounded. Life for Poika's tribe is difficult, though exciting; they hunt, fish, and try their best to keep warm amidst the bleakness of their glacial surroundings. In between, when sat around a hearth, they tell stories, tales where life and death go hand-in-hand. Haggarty's language is soft and cleverly engineered for older children, 'Don't move, Poika. There's nothing to fear ...' Thanks to being meticulously researched, Haggarty's Stone Age characters sound authentic as he explores their remote (yet strangely relevant) way of thinking. MeZolith is a dazzling evocation of ancient life and is illustrated by Adam Brockbank, who, like Haggarty, was critically praised for the work. Although MeZolith is Haggarty's first publication – in an interview dated 1999 he had said he had never been tempted to write down his stories – he has a working repertoire of over 250 folk-tales, epics and myths, which he regularly performs to all kinds of audiences.

Starting in 1981, Haggarty has been one of the prime movers of the revival of the art of professional storytelling in Britain. Ever since he has appeared on numerous television and radio Programmes, as well as international storytelling festivals in over 23 countries – ranging from France, Germany and Holland, to Israel, America and Canada. In Britain, Haggarty has worked for the National Trust, the Natural History Museum, the Science Museum, the Museum of London and Shakespeare’s Globe, as well as making regular appearances at the Barbican with The Crick Crack Club, a hugely influential storytellers' company which Haggarty founded in 1988, and whom he has guided as their Artistic Director ever since. From 1993 until 2006, Haggarty was the Co-Founder and Programmer of the 'Beyond the Border International Storytelling Festival' held each year in Wales. In November 2000, he took up a two-year residency in Gloucester as Britain’s first ‘Official City Storyteller.’ Since 2001, he has worked with Chinese-American Cellist, Yo Yo Ma’s Silk Road Project for whom he devised and presented narratives for their family concerts on their world tours. In this capacity he has performed in such venues such as The Carnegie Hall, New York, for audiences of up to 10,000 people.

Haggarty's performances include an acclaimed two-hour version of the 5,000-year-old 'Epic of Gilgamesh', as well as other favourites such as 'Beauty & the Beast', 'Mr Sandman' and his 'Fairytales for Grown-ups' – all of which have earned Haggarty international renown. His passion for Bronze and Iron Age myths has produced inspired retellings of ‘Midir and Eadaoin’ and most recently the modern myth, ‘Frankenstein’, which was commissioned by the Hay Literature Festival in 2002. He has performed solo, as well as with other storytellers, musicians and other artists and has made field-trips to research epic singing traditions in Northern and Central India, as well as Central Asia. Haggarty's 30-year long commitment to the cause of international storytelling has required an intense degree of dedication. By his own admission, he doesn't memorize his tales; rather he improvises them, taking the listener on a different journey with each telling. He has drawn much from the example of medieval Irish storytellers, whose training could last up to a a dozen years. Though he has undoubtedly drawn much from both ancient and contemporary literature – his library has over 3,000 volumes – his favourite model is that of the traditional storyteller. One of his heroes is Duncan Williamson, the Scottish traveller, a member of a historically nomadic people, which though separate from Romany people, shared much of their passion for the oral tradition and often dark tales of greed, envy and forgiveness.

In the admittedly difficult art of keeping audiences constantly on the edge of their seats, Haggarty is an acknowledged master. It was to this effect perhaps, that Erica Wagner, in an interview with Haggarty published in The Times (1999), said: 'The six-year-olds were silent. No big deal? OK. The six-year-olds were silent for nearly an hour.' Along with other near-contemporaries like Jan Blake, Ben Haggarty is one of the most lauded and recognized names in this newly-revived form of literature – recognition of which led to Haggarty being appointed an Honorary Professor of Storytelling at Berlin's University of the Arts in 2007, whose students he continues to inspire and initiate into the mysteries of his ancient and powerful craft.

Why do I write? I don’t! I tell – and I don’t even tell original tales. I have little concern with originating new stories as plenty of other people are doing that. At one level it’s a question of cultural sustainability, do we even know all the ‘old’ stories? Today’s ‘Cutting Edges’ are often made of cheap metals that blunt too readily and are ultimately disposable: my call is to the challenge of re-sharpening old and proven edges. My wish is to demonstrate that the stories our ancestors found worth handing on, are indeed worth handing on. The fact that people can enjoy hearing a story that can be traced back at least 5,000 years, validates its place in the contemporary arts. I’m interested in the magic of listening, the penetration of imagination, the processes of the transmission of ideas and the energy needed to make a story live and live again. Traditional storytelling celebrates cultural continuity, challenges fragmentation and calls for essential acts of recreation and renewal that are genuinely popular.

@CrickCrackClub Heads up! Our Autumn shows are going on sale - starting with September, October and November at the @TheStoryMuseum… https://t.co/EKbJK2RBIn
(5 days ago)

@CrickCrackClub Thank YOU @StoryClare for another cracking performance! And to the all the brilliant people who came out to… https://t.co/vghLWt2lqj
(7 days ago)

@CrickCrackClub It's #FolkloreThursday's birthday which seems like a good time to remind you about the huge amount of excellence yo… https://t.co/xqUHk2Y91K
(10 days ago)