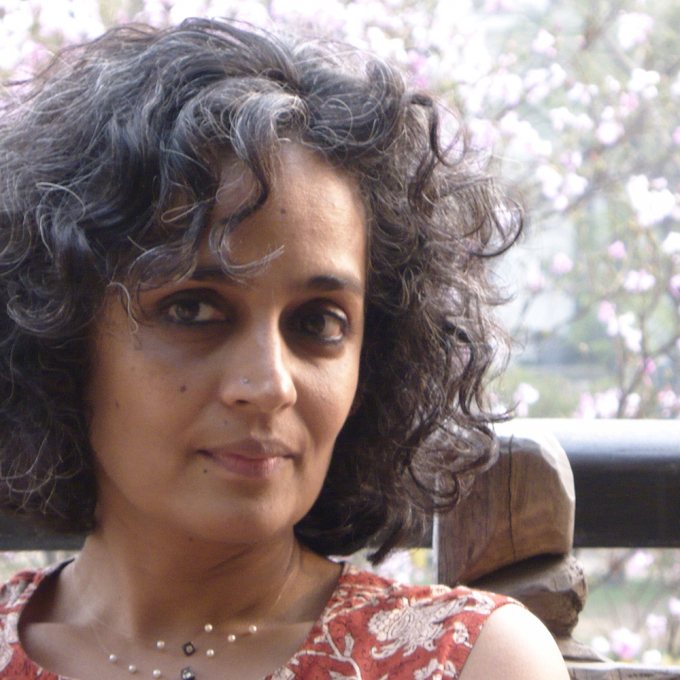 Arundhati Roy was born in 1960 in Kerala, India. She studied architecture at the Delhi School of Architecture and worked as a production designer. She has written two screenplays, including Electric Moon (1992), commissioned by Channel 4 television. She lives in Delhi with her husband, the film-maker Pradip Krishen.

The God of Small Things, her first novel, won the Booker Prize for Fiction in 1997 and has sold over six million copies worldwide. An immediate bestseller, the novel was published simultaneously in 16 languages and 19 countries, but caused controversy in India for the description of a love affair between a Syrian Christian and a Hindu 'untouchable'. Set in Ayemenem in Kerala, a rural province in southern India, it is the story of two twins, Estha and Rahel, their reunion after 23 years apart and their shared memories of the events surrounding the accidental death of their English cousin, Sophie Mol, in 1969.

She is also the author of several non-fiction books,including: The Cost of Living (1999), a highly critical attack on the Indian government for its handling of the controversial Narmada Valley dam project and for its nuclear testing programme; Power Politics (2001), a book of essays; and The Algebra of Infinite Justice, a collection of journalism. The Ordinary Person's Guide to Empire was published in 2004. She has since published a further collection of essays examining the dark side of democracy in contemporary India, Listening to Grasshoppers: Field Notes on Democracy (2009).

Arundhati Roy was awarded the Lannan Prize for Cultural Freedom in 2003. Her latest book is The Ministry of Utmost Happiness (2017), her second novel. It was longlisted for the Man Booker Prize and, in the US, was a finalist for the National Book Critics Circle Award.

Following in the footsteps of Salman Rushdie's Midnight's Children (1981) and Vikram Seth's A Suitable Boy (1993), Arundhati Roy's The God of Small Things (1997) has been hailed as the latest literary 'discovery' from India.

Earning advances in the region of one million dollars, translated into thirty languages, snatching the prestigious Booker prize award in 1997 and selling over six million copies, the publicity surrounding this novel has been phenomenal. Its high profile has been fuelled by the controversial life of its author. Roy is a politically active writer, passionately committed to environmental politics (notably the flooding of the Narmada Valley in North Western India). In March 2002 her jail sentence attracted substantial international press attention and Roy's powerful political essays are now widely available in collections like Power Politics, The Algebra of Infinite Justice and The Cost of Living.

While many contemporary writers are clearly envious of the amount of media attention Roy and her first novel have managed to attract (there has been a critical backlash following Roy's meteoric rise to fame), the unfortunate outcome has been a conspicuous lack of debate about the text itself. This is a pity, because The God of Small Things is text that rewards serious critical scrutiny.

One of the most repeated and misleading criticisms of the novel is that it merely exoticises the East for a cosmopolitan Western readership. Certainly the novel's unprecedented success in Europe and North America, at a time when Asian-chic is all the rage, should not be viewed innocently. However, what such criticisms have tended to neglect is the extent to which The God of Small Things is a self-reflexive text that both reproduces and parodies representations of India as the exotic. Take the opening paragraph of the novel:

'May in Ayemenem is a hot, brooding month. The days are long and humid. The river shrinks and black crows gorge on bright mangoes in still, dustgreen trees. Red bananas ripen. Jackfruits burst. Dissolute bluebottles hum vacuously in the fruity air. Then they stun themselves against clear windowpanes and die, fatly baffled in the sun.'

These highly wrought, beautifully poetic lines (typical of the novel as a whole) have clearly contributed to the overall success of The God of Small Things. They are part of what make it such a seductive narrative. However there is a sense in which these sentences are also overwrought. The richly figurative, conspicuously decorative prose of the novel also ultimately has the effect of foregrounding its fictional status, its status as representation. As if to accentuate this fact, the opening flirts with some of the central figures and tropes of high modernist literature, including T.S. Eliot, for whom 'April is the cruellest month', and Joseph Conrad, for whom the 'heart of darkness' is a pregnant, landscape of (seductive) fecundity and (repulsive) terror. These opening lines also self-consciously allude to some of the dominant images of Indo-Anglian fiction, including the 'heat and dust' (immortalised in Ruth Prawer Jhabwala's novel of the same name) and the reference to pickles and preserves in the chapter's title (the structuring metaphor of Rushdie's Midnight's Children). The epigraph to Roy's novel, a quotation from John Berger, is crucial to an understanding of what follows: 'Never again will a single story be told as though it's the only one'.

To say that The God of Small Things makes itself available for a kind of readerly tourism is to neglect the way in which this text also offers a critique of tourism in the form of the 'History House'. The History House, at the heart of Ayemenem, has been transformed into a five-star hotel: 'In the evenings (for Regional Flavour) the tourists were treated to truncated kathakali performances ('Small attention spans,' the Hotel People explained to the dancers). So ancient stories were collapsed and amputated. Six-hour classics were slashed to twenty-minute cameos.' Such accounts politicise, rather than reinforce the construction of India as the exotic.

Of course, The God of Small Things is more than a metafictional story about storytelling. The novel is also driven be a compelling plot which moves deftly between the generations of a single family in Kerala; between grandmother Mammachi and her bitter, brooding sister Baby Kochama; between Ammu, her brother Chako, and their children Estha, Rahel and Baby Sol. The narrative centres on the consequences of Ammu's forbidden relationship (one of many in the novel) with Velutha. An 'untouchable' who is, ironically, gifted with his hands, Velutha works for the family business, Paradise Pickles. His transgressive relationship with Ammu, violates the laws of caste, class and culture with tragic consequences for the whole family.

The God of Small Things is a skilfully structured novel that shuttles almost imperceptibly between past and present. As the tale moves from the energy and laughter of youth, to the more resigned, melancholy world of adulthood, a series of correspondences are established across the generations. These include Rahel's taboo relationship with her twin brother, a sexual encounter that establishes an intricate pattern of repetitions across the narrative, repetitions that haunt both the characters and readers of the novel alike.

2017
The Ministry of Utmost Happiness
2014
Capitalism: A Ghost Story
2011
Kashmir: The Case for Freedom
2009
Listening to Grasshoppers: Field Notes for Democracy
2004
The Ordinary Person's Guide to Empire
2002
The Algebra of Infinite Justice
2001
Power Politics
1999
The Cost of Living: The Greater Common Good and the End of Imagination
1997
The God of Small Things