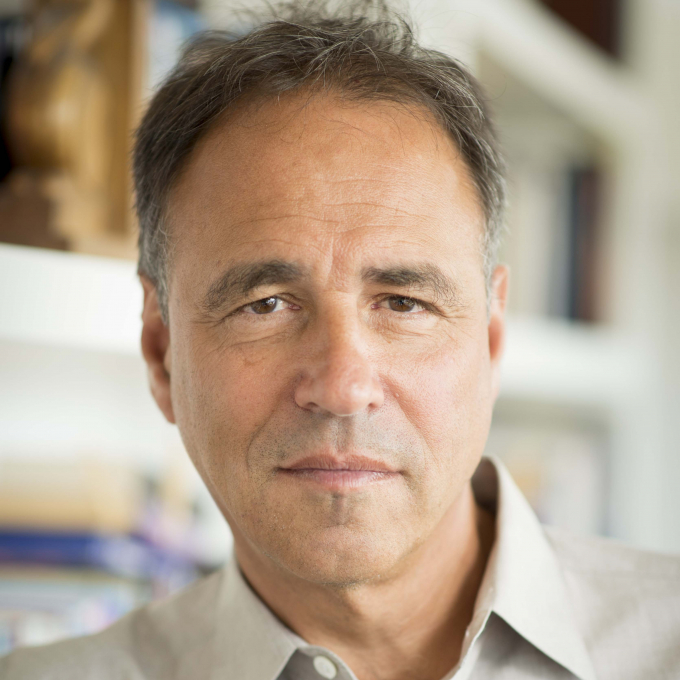 Anthony Horowitz is best known as a screenwriter and children's novelist.

Born in 1955 in North London, he was educated at Rugby School and York University, and published his first book, Enter Frederick K Bower, in 1978.

He created the television series Foyle's War, Murder in Mind, Midsomer Murders, Crime Traveller and Menace, and has written episodes for many more, including Agatha Christie's Poirot, Murder Most Horrid and Robin of Sherwood.

Further series are the Diamond Brothers series of mystery stories and the Groosham Grange series - the most recent of which is Return to Groosham Grange (2003). He also writes short stories and these, originally collected as Horowitz Horror (1999) and More Horowitz Horror (2000), have been reissued as Scared (2000) and, more recently, as The Complete Horowitz Horror (2008). Recent books are Necropolis: City of the Dead (2008), the fourth in the series Power of Five, coming after Raven's Gate (2005), Evil Star (2006) and Nightrise (2007); and The Greek that Stole Christmas (2007), the most recent of the Diamond Brothers series.

Anthony is on the board of the Old Vic Theatre. He regularly contributes to a wide variety of national newspapers and magazines on subjects ranging from politics to education and currently has a travel column in The Telegraph. He has been a patron to East Anglia Children’s Hospices and the anti-bullying charity, Kidscape, since 2008.

Anthony was awarded an OBE for his services to literature in January 2014.

Anthony Horowitz began writing professionally at the age of 20.

His first publication came at the age of 23 with a children’s book, Enter Frederick K. Bower (1978). He is most well known as an author of children’s and young adults’ fiction, but he is also heavily involved in writing for television and has created successful programmes such as Foyle’s War and Murder in Mind. He has also written a novel for adults, which is entitled The Killing Joke (2004).

Horowitz is a prolific writer and is purported to work 10 hours a day on his various projects. He has written many best-selling books for children and young adults, including the popular Alex Rider series, based on the adventures of the eponymous teenage secret agent. The first one, Stormbreaker (2000), was adapted for film, in 2006, for which Horowitz wrote the screenplay. Alex is coerced into working for MI6 and, although these novels have been inspired by the early Bond stories for this creation, Alex differs in his youth and reluctance. The popularity of this modern boys' own adventure series is reflected in its being included in the top 10 of The New York Times bestseller lists in 2007. Furthermore, Skeleton Key (2002), which is the third novel in the series, was voted overall winner of the Red House Children’s Book Award and was shortlisted for the British Book Awards Children’s Book of the Year Award in 2002. Ark Angel (2005), the sixth book, won the 2006 British Book Awards Children’s Book of the Year.

The Falcon’s Malteser (1986), marked the first in the series of books of detective stories based on the exploits of the Diamond brothers. As the title of this and the others imply, such as I Know What You Did Last Wednesday (2002), puns are staple fare in these youthful detective stories. Nick Diamond is the teenage hero as he solves the crimes for his older but less smart brother, Tim.

The more recent The Power of Five series is inspired by the supernatural genre and continues to draw on a teenage central hero, Matt Freeman. Raven’s Gate (2005) is the first in the collection. As is common in successful children’s literature, Matt, Alex Rider and Nick Diamond are independent from adults as they find their way through crimes and lies. The independent child is a common trope in such fiction, as the nominal orphan is freer to enter the world without the constraints of parents. In these novels and novellas, the teenage boys are the astute mature leaders who outwit the adults.

A rejected young male central lead is also used in the comic horror Groosham Grange (1988) and The Unholy Grail: A Tale of Groosham Grange (1999), also named Return to Groosham Grange (2003). These books are set in a boarding school where magic predominates and if this appears to be familiar it is worth remembering that the first one, published in 1988, pre-empted the Harry Potter series.

The success in sales of Horowitz’s and J.K. Rowling’s fiction signifies how the child alone in the world holds an irresistible appeal for its target audience and can, of course, also be the basis of an effective marketing strategy. This pleasure taken in reading of the escapades of the child hero may also be tied in with the concept of the family romance of which Freud writes. For Freud, the child’s separation from, and opposition to, his or her parent is necessary for the child’s development. This separation can be seen as reflected in the narratives that focus on the child estranged from his parents or guardians. There may also be an element of Horowitz demonstrating empathy for the child rather than the adult in his children’s fiction; it is well-documented that although his childhood was privileged, it was also emotionally destructive.  The Killing Joke is Horowitz’s first novel for adults and the central premise is based on Guy Fletcher attempting to trace the origin of a joke. In a review for the Observer, Peter Guttridge compares Horowitz’s ‘playful manner’ to that of Jasper Fforde and explains that ‘the plot goes right to the heart of comedy as a man finds himself, among other things, menacingly pursued by an Englishman, an Irishman and a Scotsman’ (22 August 2004). This is a comic thriller that manages to maintain its edge whilst continuously referring to familiar, old jokes. It begins with the line, ‘there’s this guy, goes into a bar …’, for example, and includes mentions of ‘why did the chicken cross the road?’ and the perhaps inevitable ‘knock, knock’ jokes. The sinister aspect of this novel is revealed when Guy is framed for murder and the plot veers towards the macabre, as the joke manufacturers defend their secrets.

Horowitz’s interest in crime is evident in both his novels and television work. As the creator and writer of Foyle’s War, which is a detective series set in Britain in the early 1940s, he demonstrates an ability to be versatile within the crime genre as he shifts away from previous work in both tone and style. He has also written extensively for Midsomer Murders, a crime drama series based on novels by Caroline Graham, and scripts in the 1990s for Agatha Christie’s Poirot. His relish for black humour, which is in evidence in The Killing Joke, is also revealed in diluted form in Midsommer Murders and in the 1996 ‘The Body Politic’ episode of Murder Most Horrid.

Conclusively, Horowitz’s output and range is admirable, as his work is deemed popular across the generations. He also stretches his talents and is prepared to accept a variety of challenges. As well as his work for television, he has also written the play Mindgame (2000), a dark comedy which has had mixed reviews; and the original script for the horror film The Gathering, which had its premier in Cannes in 2002. He also wrote the screenplay for Just Ask For Diamond (1988), which is an adaptation of his own work, The Falcon’s Malteser.

@AnthonyHorowitz @LouiseMangos Thanks, Louise. I should have added: "Better late than never." Very happy that Twist is doing so well.
(7 hours ago)

@AnthonyHorowitz @HippieBaked @bloodbrospod Thank you. I'm glad I've given you something you enjoy.
(11 hours ago)

@AnthonyHorowitz @johndblackburn4 I shall copy and send this to her. Thank you. 🫢
(11 hours ago)