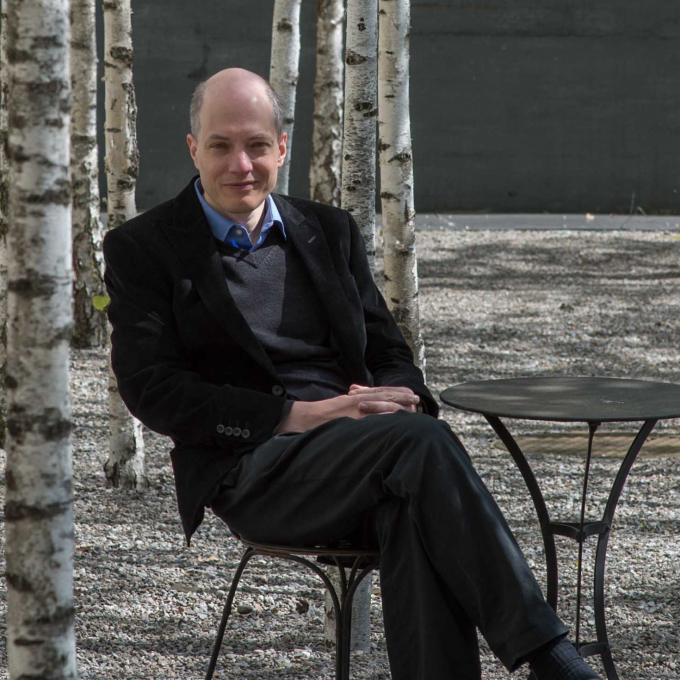 Born in 1969, writer Alain de Botton moved to England with his family from Switzerland when he was eight years old. He was educated at Cambridge University, where he read History.

He is a frequent contributor to numerous newspapers, journals and magazines, and is a member of the Arts Council of England's literature panel. He has published three novels: Essays in Love: A Novel (1993), a perceptive modern love story; The Romantic Movement: Sex, Shopping and the Novel (1994), a comic investigation into the problems of relationships; and Kiss and Tell (1995), a biography of an ordinary young woman by her lover. He is also the author of works of non-fiction, including the best-selling How Proust Can Change Your Life (1997), an intriguing and original view of the French novelist's life, work and influence that is at once an unlikely self-help guide and an introduction to one of the twentieth-century's greatest writers. The Consolations of Philosophy (2000), a guide to philosophy for the general reader, was published to coincide with a television series which he also presented. The Art of Travel (2002) investigates the issues that lie behind our desire to travel, and the themes of Status Anxiety (2004), are also examined in a Channel 4 television series.

Alain de Botton lives in London. Recent books include The Architecture of Happiness (2006), which discusses beauty and and ugliness in architecture; The Pleasures and Sorrows of Work (2009); A Week at the Airport: A Heathrow Diary (2009) an account of his time as Writer in Residence at Heathrow Airport; Religion for Atheists (2012); and Art as Therapy (2013). He has been involved in making a number of television documentaries, and helps to run a production company, Seneca Productions. Alain also started and helps to run a school in London called The School of Life, dedicated to a new vision of education.

Alain de Botton is an essayistic writer of a kind perhaps familiar in France or Continental Europe but unusual in Britain.

Since coming to prominence with How Proust Can Change Your Life (1997), a surprise bestseller combining witty reflections on personal lives with acute commentary on Proust’s works, de Botton has produced much journalism as well as a wide-ranging series of books and their television offshoots. His entertaining discursive style ranges over philosophy, travel, and architecture, but de Botton’s essential subject is human nature. He typically raises questions: how to live, how to love and how to find happiness – and suggests some Self Help solutions to these perennial conundrums. Recently de Botton has helped found two new organizations - Living Architecture and The School of Life - the latter aiming to challenge traditional university teaching and direct students to a more fulfilled life (see alaindebotton.com).

His first book, Essays in Love: A Novel (1993), is a playfully erudite mix of fiction and philosophical questioning. It follows the progress of a love affair between the architect narrator and Chloe, a young graphic designer, who meet during a flight between Paris and London. Chapter headings include ‘Romantic Fatalism’ and ‘The Subtext of Seduction’ (‘seduction is a form of acting’) and we follow the pair all the way to their eventual parting. But this is no conventional love-gone-wrong. Instead, the relationship is analysed through numbered paragraphs, in which the perversity of human feelings and life’s incidents are illustrated by diagrams, pictures, even mathematical formulae.

In How Proust Can Change Your Life, De Botton presents himself as a moralist and philosophe, brilliantly suggesting the connections between Proust’s life and writings. He introduces his own conclusion at the outset: ‘There are few things humans are more dedicated to than unhappiness’. The book has been compared to Julian Barnes’ Flaubert’s Parrot, and within its elegantly written pages de Botton tells us about Marcel Proust’s relationships and family background, habits, ailments, sensitivities, ‘the privileged role’ that food plays in his writings, and much besides. The fictional element is delightful, as in a conversational exchange between Proust and James Joyce in a taxi going home from the Paris ‘Ritz’. Also fascinating his discussions of the origins of characters within In Search of Lost Time. But De Botton pushes the literary commentary into his own personal reflections, recalling a girlfriend who seemed like Albertine to him, while another’s aunt reminded him of the Duchesse de Guermantes. The book then turns into an instruction manual, replete with Proustian maxims, on how to love life, stop wasting time, how to be happy in love. As to the latter, it finds ample confirmation of Proust’s unsuitability as a guide.

Rather than pursuing happiness, the book concludes, one should be ‘pursuing ways to be properly and productively unhappy’. This perhaps suggested the rationale for de Botton’s next book, The Consolations of Philosophy (2000), structured around the lives and works of six philosophers (from Socrates to Schopenhauer) and the six ‘consolations’ they can offer humanity. These are: for unpopularity, not having enough money, frustration, inadequacy, a broken heart, and ‘difficulties’. Accompanied by illustrations and paintings, de Botton’s witty analytical reasoning is given full play, echoing Seneca’s view that philosophy as a discipline can ‘assist human beings in overcoming conflicts between their desires and reality’. De Botton again places seemingly personal observations into his discourse, even mentioning an episode of impotence during a 1993 holiday in Portugal with his girlfriend ‘L’ – which recalls a similar admission in Montaigne’s 1580 Essays. He concludes by walking in the footsteps of Nietzsche, seven hours in the rain to the top of a mountain, arriving ‘in a state of extreme exhaustion’.

More pleasurable journeys awaited him in The Art of Travel (2002). In a series of essays placed into sections entitled 'Departures', 'Motives', 'Landscape', 'Art' and 'Return', De Botton considers the satisfactions and disappointments inherent in travelling, with plenty of characteristic digressions into paintings and photographs along the way. Ruskin, Baudelaire and Wordsworth are his literary companions. In Madrid he wants to read the guidebooks in his hotel room; in Provence, Van Gogh is the guide, and for his home territory of Hammersmith, London, he provides the commentary himself. Travel is a metaphor for life – and so he speculates as to how people can travel more ‘happily’. Yet there is a paradox, as he points out, ‘We may best be able to inhabit a place when we are not faced with the additional challenge of having to be there’.

Within The Architecture of Happiness (2006) de Botton turns his attention to buildings and their meanings, architects and their purposes, in the conviction that ‘it is architecture’s task to render vivid to us who we might ideally be’. Once again, the book is divided into sections and lavishly illustrated. It comes closer than his other works to a straightforward account, as it involves a good deal of popularized architectural history, from the Classical styles and Gothic Revival to Modernism and beyond. De Botton’s digressions have become intrinsic to his books; here we learn much about furniture, sculpture, even typefaces. His quest for the human meanings of buildings leads him from a branch of McDonald’s into the nearby Westminster Cathedral, searching for that which ‘can assist us in the commemoration of our genuine selves’. He comes, however, to an uncomfortable conclusion: ‘The failure of architects to create congenial environments mirrors our inability to find happiness in other areas of our lives’.

The Pleasures and Sorrows of Work (2009) received mixed reviews. Its urbane reflections on ten occupations, from accountancy and rocket scientist to biscuit making, are perhaps less palatable at a time of economic recession. Nevertheless there are, as always, intelligent reflections on the processes of industrial civilization, and personal asides about his own career as a writer and academic manqué. The book has photographs by Richard Baker, who also collaborated on A Week at the Airport (2009). Its subtitle, ‘A Heathrow Diary’, is self-explanatory as de Botton relates his experiences as writer in residence at the airport’s new Terminal 5. He notices first the architecture by Richard Rogers - judging it as ‘giving shape to the promises of modernity’ - and then the workers and passengers. He listens to unlikely stories, closely observes departing lovers, a pilot (‘I felt like a child unsure of his father’s affections’) and meets the B.A. Chief Executive. The airport turns out to be a quintessential subject for de Botton’s insatiable people-watching, giving ample scope for his philosophical commentary and wit.