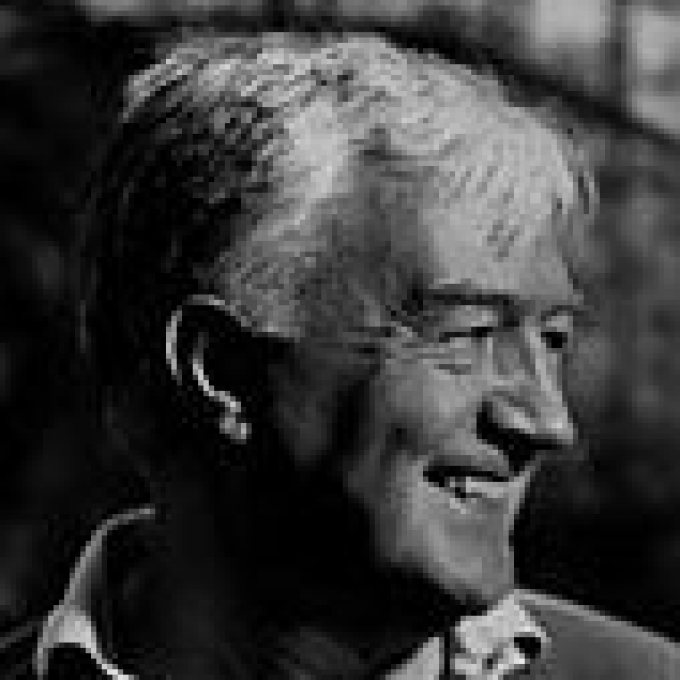 Adrian Mitchell was born in 1932 and studied at Christ Church, Oxford.

He worked first as a reporter on the Oxford Mail, then moved to the Evening Standard in London. After writing his first novel and television play, he became a freelance journalist, writing about pop music, books and television for major newspapers including The Guardian, The Observer and The Daily Mail. From the mid-1960s he was a freelance writer for both adults and children and his work includes poetry, novels, plays and libretti.

Adrian Mitchell also wrote poems and stories for children. His poetry books include his collected poems, Balloon Lagoon (1997) and Daft as a Doughnut (2004), which was chosen by the Poetry Book Society as the year’s best single author collection of children’s poems. He wrote three story books about Baron Munchausen, a series of books about two children who adopt a mammoth, and adaptations of well-known tales such as Hans Christian Andersen’s The Ugly Duckling (1994) and The Steadfast Tin Soldier (1996). Daft as a Doughnut was published in 2004.

His plays include adaptations of works by Calderon, da Vega, Ibsen and Gogol, several versions of well-known works for children including Alice in Wonderland and Through the Looking Glass (2001) and The Lion, The Witch And The Wardrobe (1998), and stage adaptations of Beatrix Potter Tales.  He also wrote libretti, including a new libretto for The Magic Flute (1966) and Houdini (1977), for the Netherlands Opera. He wrote plays for various theatre companies, including the Royal Shakespeare Company and the National Theatre.

Adrian Mitchell was a Fellow of the Royal Society of Literature, and co-edited Red Sky at Night: An Anthology of British Socialist Poetry (2003). He died in December 2008.

These lines from his collection, The Shadow Knows (2004), seem to sum up what Adrian Mitchell’s writing meant over four decades, and what it continues to say. One of Britain’s best-selling poets, whether for adults or children, he is popular not only in terms of sales but also for directly addressing readers and mainly using simple rhyming forms. Love and war are his abiding themes - he spoke out in anti-war and ecological protests, with satirical and whimsical humour, sentiment - and true family values. Many of his poems are dedicated to, or were inspired by, his wife Celia, their children and grandchildren. Mitchell was also enormously prolific from the mid-1960s onwards in the theatre world, when he worked with Peter Brook on several shows, and adapted his own works for the stage such as Nobody Rides the Unicorn (a puppet show performed in July 2005). He was a well-known performer, frequently reading at venues, demonstrations, and public events throughout Britain and overseas. As he explained in the introduction to his collection All Shook Up: Poems 1997-2000 (2000): ‘I like the Lone Ranger kick of riding into a new town to perform my poems but I also like forming or joining a theatre gang and working as part of a team.’

Mitchell coined one of the most often-heard aphorisms about the ‘unpopularity’ of modern poetry: ‘Most people ignore most poetry / because / most poetry ignores most people’. By contrast, his work was always deliberately populist and accessible, and intent upon its audience. He was among the first ‘performance poets’ in Britain during the 1960s, alongside his friends Roger McGough, Brian Patten and Adrian Henri (‘The Liverpool Poets’), though his work always had a more political edge than theirs. He took part in the famous ‘Wholly Communion’ event at the Albert Hall in London during June 1965, reading alongside American Beat poets Allen Ginsberg and Gregory Corso, when Mitchell’s anti-Vietnam War poem rather stole the show: ‘You put your bombers in, you put your conscience out, / You take the human being and you twist it all about / …. Tell me lies about Vietnam’ (‘To Whom It May Concern’).

For Beauty Douglas: Collected Poems 1953-79 (1982) brought together much of his first four volumes, and was illustrated with drawings by his friend Ralph Steadman. Like many of his books, it is arranged in thematic sections, like ‘Religion, Royalty and the Arts’, and ‘Love, the Apeman, Curses, Blessings and Songs for Friends’. One of his continuing themes was established early on, namely his satirical jibes about a changing roster of British politicians, including Nye Bevan (‘Despite His Change of Heart’), Harold Macmillan, Lord Douglas Home, and Enoch Powell. He satirised New Labour policies (‘We Bomb Tonight’) with equal relish and wit: ‘For the holy name of ‘Spam’ / please substitute ‘Blair’’ (‘Haiku Politics’). From the Hippy Era onwards Mitchell opposed war with love, consistently espousing the sentiments, ‘Make love. We must make love / Instead of making money’ (‘To You’). Erotic daydreams also animated his work, as in these charming lines to his wife: ‘When I am sad and weary / When I think all hope has gone / When I walk along High Holborn / I think of you with nothing on’ (‘Celia, Celia’). Sentiment is important as well: in ‘Beatrix is Three’, he holds his daughter’s hand while they go downstairs, and ‘I wish silently / That the stairs were endless’.

Mitchell’s life-long pacifism can be traced to significant statements in certain poems, especially ‘My Mother and Father or Why I Began to Hate War’. His mother was a Fabian socialist, who ‘encouraged me to argue’, and who lost two brothers during the First World War. An elegy for her recalls that ‘She tried to hoist the wounded world on her frail shoulders - / It seemed a possibility’ (‘Her Life’). His father was himself a survivor of the trenches; he ‘descended into hell … Sent, by the King, to hell in a kilt’ (‘My Father’s Hand’). ‘To Whom It May Concern’ may be the best known of Mitchell’s numerous anti-war poems, alongside ‘Fifteen Million Plastic Bags’, and the subject preoccupied him. In Blue Coffee: Poems 1985-1996 (1996) there are memories of being evacuated as a child during the Second World War, in ‘Spitfire Daydream’. He gives vent to moral indignation about recent conflicts, notably the Gulf Wars: ‘And once again the politicians / Whose greatest talent is for lying / Are sending you where they’re afraid to go / To do their killing and dying’ (‘Blood and Oil’).

In the introduction to All Shook Up: Poems 1997-2000, Mitchell explains that ‘Much of my poetry these days goes into plays with songs (for children and adults)’. These include Orpheus Sings, The Mammoth Sails Tonight (1999), and his adaptations of The Snow Queen (1997) and The Lion, the Witch and the Wardrobe (1998). His own children and grandchildren always featured prominently throughout his work: ‘I saw you Briony beyond the wild roses / and felt you in my heart like an exploding star’ (‘For Briony Always’). Indeed, the artist Tom Phillips has commented that one of Mitchell’s chief characteristics is ‘to have retained the child in himself’. Mitchell’s inspired silliness – as in ‘A Warning to Those Who Fly’, about the perils of breaking wind in outer space - is evident throughout his highly entertaining Daft As a Doughnut (1999). This has funny and poignant moods, and numerous short poems, especially about ‘My Favourite Word’, animals: ‘The plural, not the singular, / For in that one word Animals, / How many miracles there are’. The collection also has his sequence ‘The Twenty-One Secrets of Poetry’, designed to inspire kids to get writing: ‘To make a poem / That lasts a minute / Daydream for hours / Before you begin it’.

In 2002, the socialist magazine Red Pepper appointed Adrian Mitchell as ‘The Shadow Poet Laureate’, an unofficial title that seemed to suit his public style very well. His seemingly indefatigable sense of purpose entitled him to be something of ‘A Living Monument’, and to write such lines as these with complete sincerity: ‘My poetry’s an old border collie who gets by / Performing tricks or rounding up the sheep / And it’ll keep on digging as long as politicians lie / And mothers weep’.