How does poetry travel across borders and languages? Ambrose Musiyiwa and Emma Lee, two poets from Leicester who are coordinating a multi-lingual poetry project called Journeys in Translations, discuss their inspirations and explain how you too can get involved. 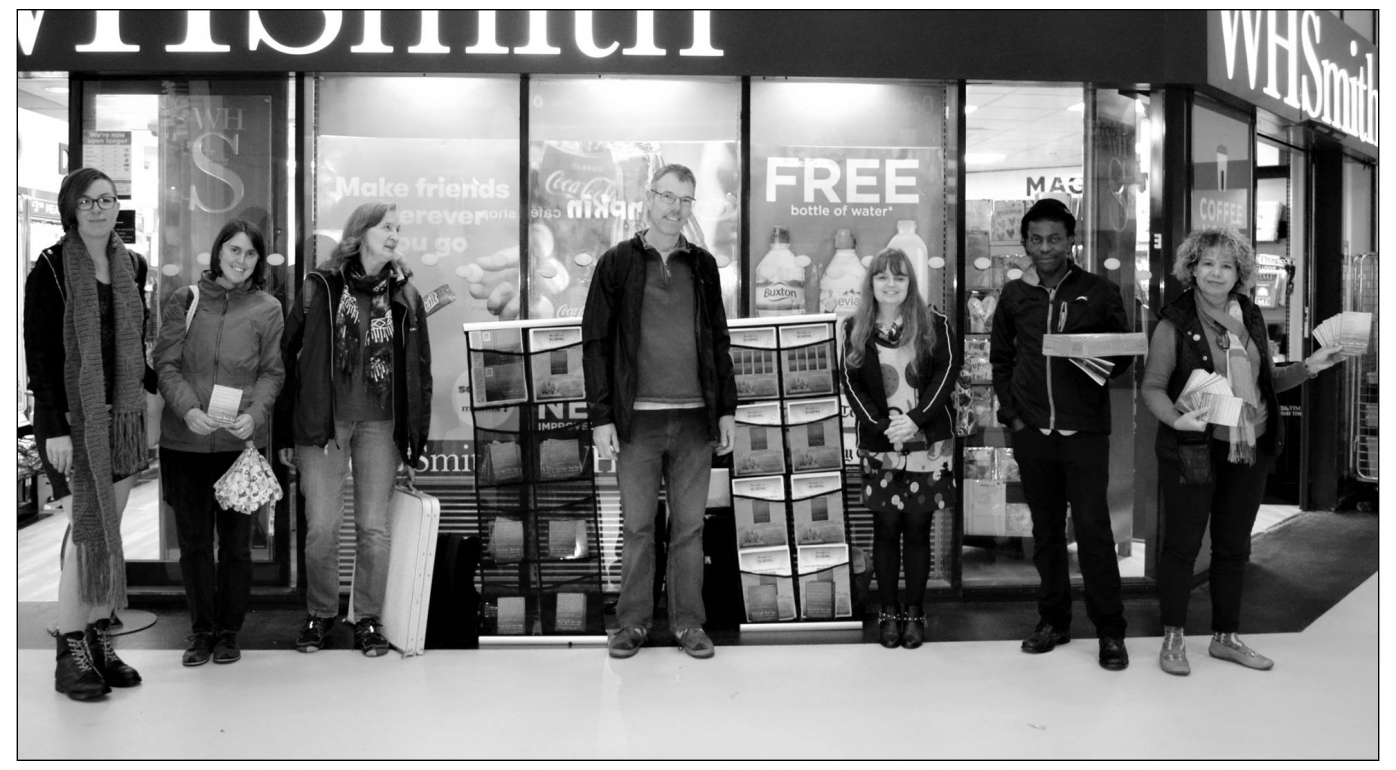 What is the Journeys in Translation Project?

Journeys in Translation is an initative that encourages people who are bilingual or multilingual or who are learning another language to have a go at translating 13 poems into other languages. The 13 poems are drawn from Over Land, Over Sea: Poems for those Seeking Refuge, a poetry anthology that was published by Five Leaves Publications in 2015. The initiative also encourages participants to share their translations and reflections on the poems and the translations in letters and emails to family and friends and on blogs and social media. Those who live in villages, towns, cities and countries beyond Leicester and Britain are also encouraged to organise Journeys in Translation events in their localities. The events could be a translation workshops or they could be events at which the original 13 poems and their translations are read and discussed. The 13 poems are also being 'translated' in other ways. For example, one of the poems, "Yalla" has been treated to a Contemporary Music for All (CoMA) East Midlands musical conceptualisation. Similarly, two visual artists are currently working on visual responses or illustrations to the poems.

What was the story behind Over Land, Over Sea?

Over Land, Over Sea: Poems for those Seeking Refuge was edited by Kathleen Bell, Emma Lee and Siobhan Logan, and was published by Five Leaves Publication, a small press based in Nottingham. It was conceived and put together when poets and literary activists in the East Midlands noticed that, on Facebook and other social media platforms, many of the people they were in contact with were responding to the refugee crisis and to media reports on the crisis in ways that were markedly different from how some politicians and some sections of the media were responding. In 2015, when plans for the anthology were being discussed, there was a mismatch between the political and media response and what needed to be done to support people who were travelling across the Mediterranean and across Europe looking for places of refuge. People in communities up and down the country responded to the refugee crisis by taking up collections and by organising convoys and travelling to camps in places like Calais, Dunkirk and Lesbos to support people who are looking for refuge.

Over Land, Over Sea is similar to these people-to-people solidarity initiatives in that in addition to bringing together brilliant poems from a range of established and emerging voices from Britain and beyond. The anthology is being sold to raise funds for Médecins Sans Frontières / Doctors Without Borders (MSF), the Nottingham and Nottinghamshire Refugee Forum, and Leicester City of Sanctuary. The anthology has been featured on Iraqi TV and at events at the StAnza poetry festival in St Andrews, Scotland; at an Exiled Writers Ink event at the Poetry Cafe in London; and at a number of events in Leicester, Nottingham, and Oxford.

Can you tell us about your poems in the collection and the inspiration behind them?

We are the Journeys in Translation coordinators, and have two poems each in Over Land, Over Sea. We also have a poem each that is being used as part of Journeys in Translation project. Emma Lee’s "Outside the Photograph" was inspired by a media picture of a rescue mission where a mother and baby were pulled to safety from the sea. The poem doesn't just talk about the rescue, but widens the lens to look into the future and imagine the baby growing into an adult. Her second poem, "Stories from 'The Jungle'" looks at some of the stories told by individual refugees focusing on what made them leave their homeland and why they wanted to reach England. In some cases it was to join relatives and family members, in others it was because they were fluent English speakers and didn't speak any other European language. As part of Journeys in Translation, “Stories from ‘The Jungle’” has been translated into languages that include Chinese, Greek, German, Italian, Polish, and Romanian.

Ambrose Musiyiwa’s contributions to Over Land, Over Sea are “The Man Who Ran Through The Tunnel” and “journeying”. Like Emma’s poems, the former was a response to media reports about a man who walked from Calais, through the Channel Tunnel, and was very close to the Folkestone end of the tunnel when he was found. The poem shows the man’s journey for the remarkable feat it was. The poem has since been featured in a number of other anthologies and, as part of Journeys in Translation, has so far been translated into nine languages. Ambrose’s second poem “journeying” similarly focuses on the journeys people who are seeking refuge are taking and some of the things they lose as well as some of the things they gain along the way.

How did the idea come about?

Journeys in Translation grew out of the Journeys Pop-Up Poem Library, an event that we organised as part of last year’s Everybody’s Reading Festival. As part of the event, we took 10 poems from Over Land, Over Sea, produced a set of postcards - with one of the 10 poems on each postcard - and gave the postcards out at the railway station in Leicester. The purpose of the exercise was to give commuters something to read as well as to encourage reflection on journeys people make or have made, the reasons behind the journeys, and the ease or difficulty that was or is inherent in the journeys.

The Pop-Up Poem Library went so well we ran out of postcards. Journeys in Translation builds on the Pop-Up Poem Library in the sense that, through the project, each of the 13 poems is going on a journey of its own … it is migrating from one language to another or to a series of other languages... or... as is happening with the ‘translations’ that musicians and visual artists are doing… each of the 13 poems is migrating from one art form to another.

How many languages and countries have been involved so far? What has the response been like?

Monica Manolachi, a poet, literary translator, and lecturer at the University of Bucharest, Romania, where she teaches English says: "Several weeks ago, we discussed some of these poems in class and students commented on them. They resonated with poems such as 'Dislocation' by Pam Thomspon, 'What’s in a Name?' by Penny Jones, 'The Man Who Ran Through the Tunnel' by Ambrose Musiyiwa, 'Framed' by Marilyn Ricci or 'The Humans are Coming' by Siobhan Logan... In some cases, they have family members who work abroad and are sensitive to issues of migration, cultural identity and cultural difference ... Initiatives like Journeys in Translation connect the reality of literature written in English with the everyday multilingual reality seen both in the street and online."

Similarly, Rinita Banerjee who translated some of the poems into Bengali, says initiatives like Journeys in Translation are important because they help us: "transcend categorized identities like that of 'refugee.' Refugees are, ultimately, human beings; so their pain, joys, experiences are no different from those of other human beings and are, thus, equally important. Their experiences need understanding, since they are worth that– understanding and empathy– emotions we must all be capable of."

And what events are being planned around the project?

So far, a number of Journeys in Translation workshops and seminars have been held in places that include Leicester, Bucharest, and Turin. During Everybody’s Reading Festival 2017 at the African Caribbean Centre in Leicester, we will be holding an event featuring readings from the original poems and translations alongside a multi-media display of the poems and translations. Also, there are plans to set up a blog to showcase all the translations received. There’s also a possibility that some of some of the translations and illustrations could end up being featured in a series of bilingual print or e-books.

How can people get involved?

About Journeys in Translation coordinators

Ambrose Musiyiwa is a multimedia journalist, a freelance writer, and a poet. He facilitates CivicLeicester, a community media channel. He co-edited Welcome to Leicester (Dahlia Publishing, 2016). His poems have been featured in anthologies that include Over Land, Over Sea: Poems for those seeking refuge (Five Leaves Publications, 2015) and Do Something (Factor Fiction, 2016).

Emma Lee's most recent poetry collection is Ghosts in the Desert (IDP, 2015). As well as being co-editor for Over Land, Over Sea: poems for those seeking refuge, she is co-editor with Ambrose Musiyiwa for Welcome to Leicester (Dahlia Publishing, 2016). She reviews for four poetry journals, blogs and has performed her poems in venues such as the Poetry Cafe, Leicester City Football Club, Leicester Cathedral amongst others. Emma is President of Leicester Writers' Club. 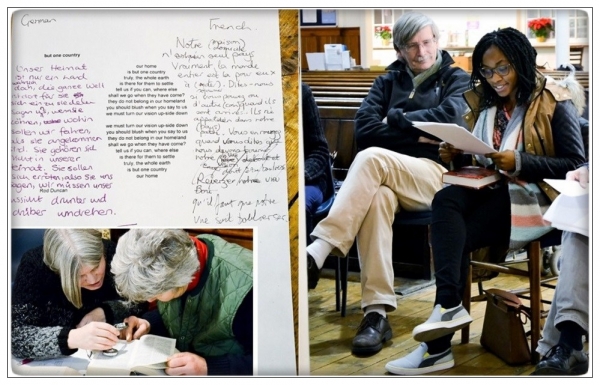