Indian Poems on the Underground 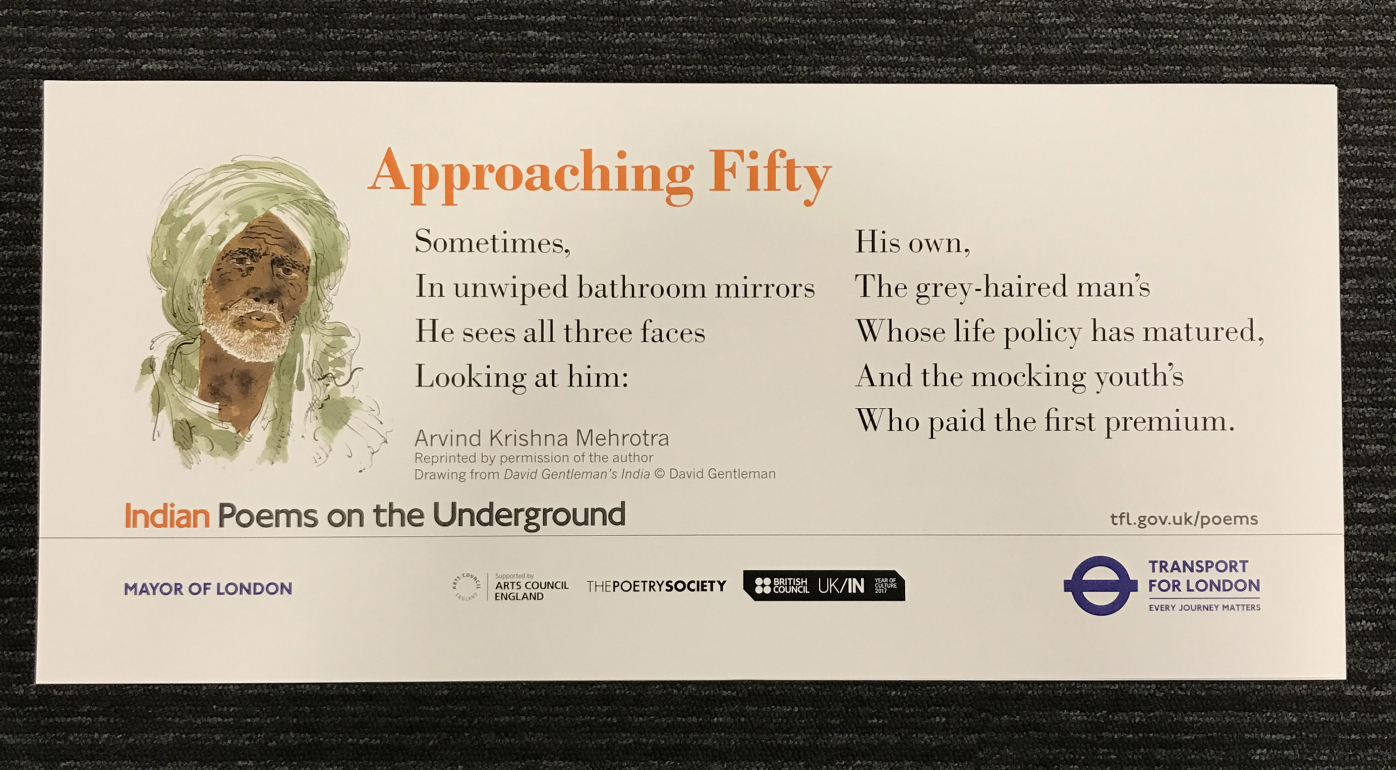 Indian Poems on the Underground is part of UK/India 2017, a year-long celebration of the long-standing relationship between India and the UK, which will see a programme of cultural exchange and activity take place in cities across both countries. #UKINDIA2017

British Council has supported Poems on the Underground since the programme began in 1986.

'Pilgrim' by Eunice de Souza (1940-2017) - a lyrical, personal poem which in a few vivid lines encapsulates the extraordinary contrasts between India past and present. De Souza, one of the most distinguished poets of her generation, taught at St Xavier’s College in Bombay, where she was an inspiration to many students and young poets. 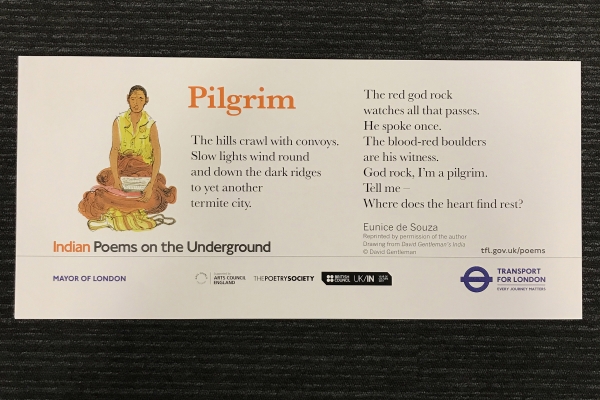 'This Morning' by Mona Arshi, the youngest poet featured, Arshi is a London child’s perception of her Indian mother’s very different world.  Born in 1970 to Punjabi Sikh parents in West London and grew up in Hounslow. She worked for a decade as a lawyer for the human rights charity Liberty UK.  Her book Small Hands won the Forward Prize for best First Collection. 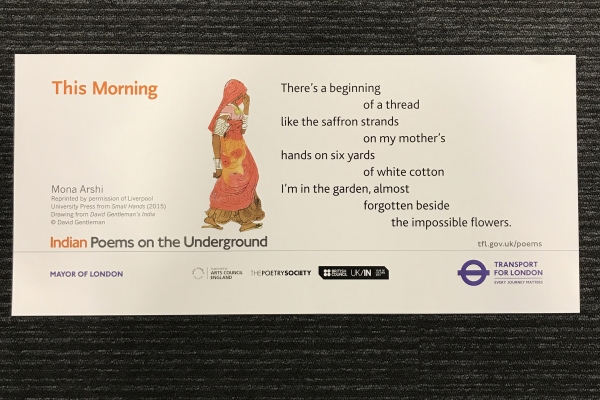 'Today' by Sujata Bhatt evokes the international world of an Indian in exile. Sujata Bhatt was born in 1956 in Ahmedabad, India, grew up in Pune and emigrated with her family to the United States when she was 12. She currently lives with her husband and daughter in Bremen, Germany. She has translated from Gujarati and German into English, and her own prize-winning poems have been translated into more than twenty languages. 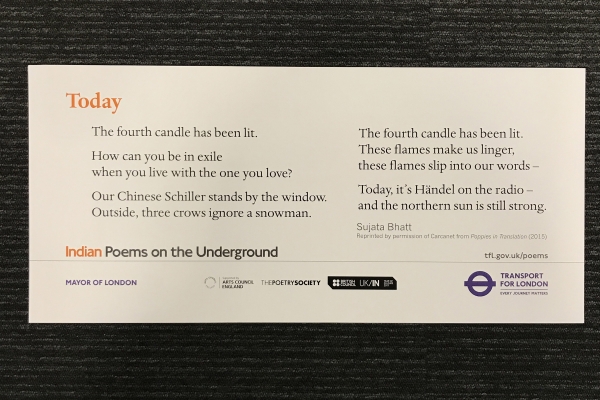 'The Butterfly' by Arun Kolatkar (1932-2004) – a deceptively simple ode to “a little yellow butterfly.”  Arun Kolatkar was a popular bilingual poet who wrote in English and in Marathi; he knew Sanskrit and drew on Western literary traditions, including black American music. He made poetry out of the patois spoken in the back streets of Bombay, the city in which he lived and worked. 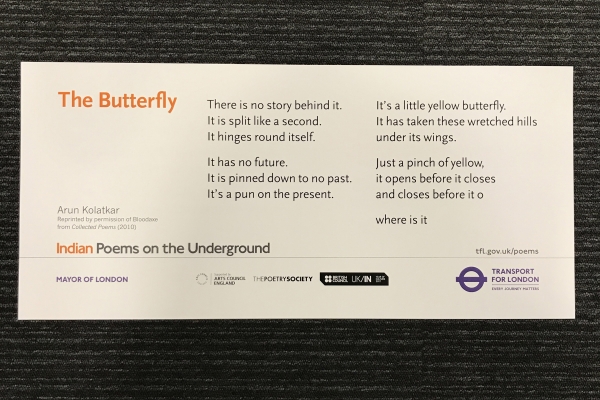 'Approaching Fifty' by Arvind Krishna Mehrotra, could be about the stages of a man’s life at any time, in any country. Mehrotra was born in 1947 in Lahore, the year of India’s independence, when Lahore became part of the new country of Pakistan. He is a major figure in Indian poetry, with three collections and an influential anthology of Indian poetry published by Oxford University Press. 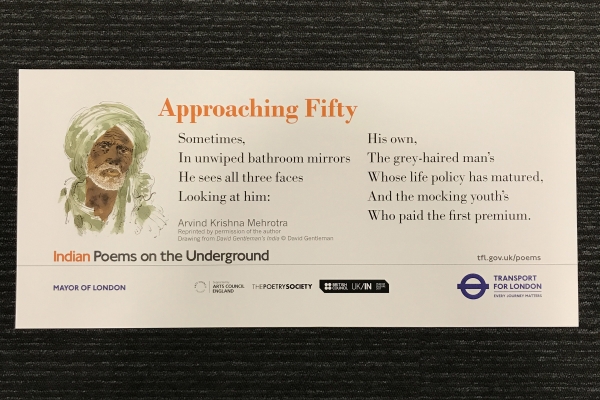 'Stationery' by Agha Shahid Ali - a poem which hints at non-Western myth, geography and history, in imagery which is vividly contemporary. Ali was born in 1949 in Srinagar, Kashmir; he moved to the United States as a “triple exile,” with ties to Muslim, Hindu and European culture. These triple strands all figure in his poems, elegies for the past, witnesses to the present. He taught in India and the United States and died in 2001 in Amherst, Massachusetts. 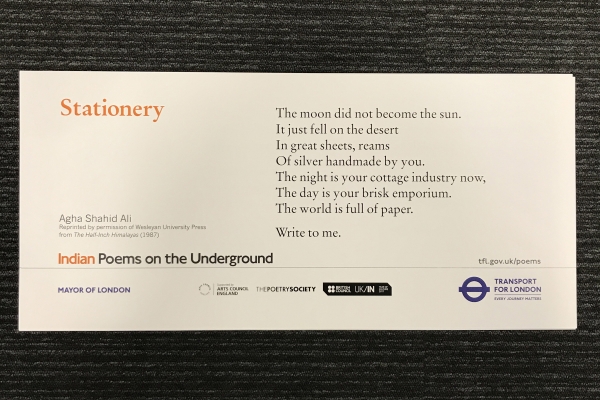 Poems on the Underground is supported by London Underground (TfL), the British Council, and Arts Council England, which has recently confirmed a new four-year award to Poems on the Underground as a National Portfolio Organisation. It is also supported by The Poetry Society. Poems are selected by writer Judith Chernaik and poets Imtiaz Dharker and George Szirtes. Posters are designed by Tom Davidson, and are available from the Poetry Society and London Transport Museum.