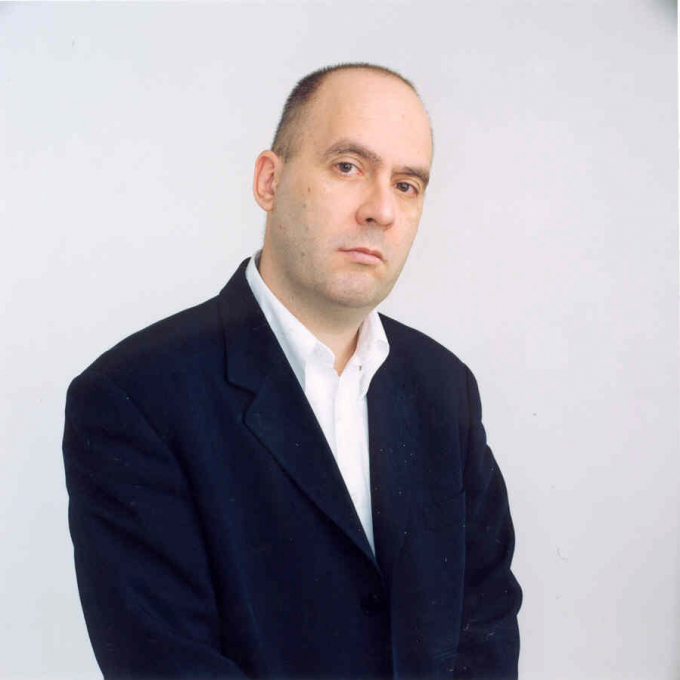 Tibor Fischer was born in Stockport, England in 1959 to Hungarian parents, both professional basketball players who had left Hungary in 1956.

He grew up in south London before going to Cambridge University to study Latin and French. He has worked as a journalist and was selected as one of the 20 'Best of Young British Novelists 2' by Granta magazine in 1993. His first novel, Under the Frog (1992), which was shortlisted for the Booker Prize for Fiction, tells the story of a Hungarian basketball player, Gyuri Fischer, dreaming of escape to the West while on a tour in 1950s Hungary.

His other fiction includes The Thought Gang (1994), the adventures of a middle-aged philosopher turned bank robber; The Collector Collector (1997), the bizarre story of a pottery bowl; and Don't Read This Book If You're Stupid (2000), seven tales of alienated and marginalised characters.

His novel, Voyage to the End of the Room (2003), a meditation on a random world, has been called an updating of Robinson Crusoe and Treasure Island for the 21st century. It weaves from the sex clubs of Barcelona and the battlefields of Yugoslavia to the deadly diving of Chuuk lagoon.

His latest novel is Good to Be God (2008) and he published another collection of stories entitled Crushed Mexican Spiders in 2011.

The success of Under the Frog (1992) catapulted Tibor Fischer to the forefront of critical and popular attention.

Honoured first with the Betty Trask Award (for 'new romantic fiction'), this extraordinary work then became the first debut novel to be nominated for the Booker Prize. By the spring of 1993 - still on the strength of this single text - Fischer was named alongside such established figures as Hanif Kureishi, Kazuo Ishiguro, Will Self and Jeannette Winterson in the literary magazine Granta's list of the twenty best 'Young British Novelists'. In the intervening years, he has consolidated this position, enjoying best-seller status, further literary prizes (primarily for short fiction), and appointments as Visiting Writer in Residence in Iowa and Singapore. With the rare honour of the publication of his story 'Bookcruncher' in the Times Literary Supplement (1998), and the appearance in the influential New Writing 9, edited by Fischer and Lawrence Norfolk, his dramatic transformation from unknown outsider to established figure in the contemporary British literary world appears complete.

Under The Frog is an account of events in Hungary during the turbulent decade following World War II. Reminiscent of the bitterly funny tales of Milan Kundera, it reads as a late contribution to the Eastern European tradition of comic protest writing. Fischer is in fact the son of Hungarian parents, and was foreign correspondent for the Daily Telegraph in Budapest (1988-90). Reviewers particularly remarked on the authenticity of detail and tone in this novel. The work is identified on the fly-leaf as a 'black comedy', its title an allusion to the Hungarian expression for the worst place in the world to be 'under a frog's arse down a coal mine'. Against the backdrop of a corrupt and collapsing Communist regime, the picaresque narrative centres on the adventures of two members of the perpetually touring National Railways basketball team, 'The Locomotive', Gyuri Fischer, journeyman performer and class alien on account of his bourgeois origins (his father having failed in several business ventures), and his friend and mentor Pataki, star of Locomotive, inveterate prankster, and prodigious womanizer. This improbable pair lurches through the decade shooting hoops, taunting authorities, chasing women, and continually, bitterly decrying the chaos and decay that surround them. Fischer relates their escapades with energy and relish, constructing along the way a rich vision of the difficulties and absurdities of life in postwar Hungary.

Fischer's is a familiar, knowledgeable and richly ironic voice, and Under the Frog is sustained by his bleak yet affectionate appreciation of the Hungarian experience. Although frequently hilarious and farcical - ridiculous basketball games in exceptionally odd places, our twosome's battles with, arrests by, and invariable escapes from the superlatively incompetent Secret Police - Fischer's writing also powerfully registers the sadness and pathos appropriate to this nonetheless tragic history, often achieving effects with startlingly judicious metaphors. One character's resignation before his fate is likened to 'sitting in the back of adversity's big black car'; in the final lines of the book, as Gyuri looks back to the border he has just crossed, Fischer's description captures both the exhilaration of escape and the disorienting sense of loss and grief 'Tears, in teams, abseiled down his face'. The political critique may extend little beyond blanket condemnation and ridicule of Hungarian totalitarianism, but the humour and humanity of the novel nonetheless render it a moving and enduring indictment of that state.

Under The Frog remains Fischer's outstanding achievement. His subsequent work eschews the profound emotional and political issues that invest his debut with such poignancy, exploring instead an increasingly surreal and extreme comic vision. In the intellectual caper novel The Thought Gang (1994), the distinctive features of Fischer's writing - ostentatious (and bathetic) breadth of vocabulary, casually showy erudition, and bravura experiments with form - are on show in a work he describes as a 'short book about all human knowledge and experience'. The narrative follows another unlikely duo, Eddie Coffin, sometime lecturer in Philosophy at Cambridge University, and Hubert the one-eyed, one-armed, one-legged, and wholly psychotic gangster, in their brief but celebrated career as the eponymous 'Thought Gang', a bank-robbing phenomenon famed through the south of France for the cerebral application of philosophical principle to the art of the heist. The central conceit is the comic aptness of this manic conjunction of philosophy and bank robbery; the formal achievement of the work, which manages to echo both Tristram Shandy and Diogenes Laertius's Lives of Eminent Philosophers, is to sustain an atmosphere of comic fraudulence within a structure that consistently implies systematic, if recondite, intellectual order. Although The Thought Gang sealed Fischer's cult status and confirmed his position as one of the 'new lads' of British fiction (alongside Nick Hornby, Toby Litt and others), John Updike summed up the disappointment of a number of critics in describing it as 'a textbook example of an author outsmarting himself'.

In the fantastical The Collector Collector (1997), a comic escapade fashioned from still flimsier and more fantastic stuff than its predecessors, the narrator is an ancient and garrulous bowl with the capacity to observe and catalogue its surroundings. Having passed though 10,642 collectors (over 6,500 years), the bowl has an extensive stock of anecdotes, historical trivia and wisdom to impart, though the novel also sustains an exhilarating and bizarre narrative pace. However, slapstick violence and even more slapstick sex tend to predominate in the tale, and despite the bowl's obvious skill as a raconteur, it seems obsessed with the lowest common denominators of sensation. There may be a trace of Boccaccio or Rabelais in this relish for earthy fundamentals, but the obsessive, adolescent level of this strand of Fischer's writing is ultimately disappointing, even disturbing, particularly in the glimpses of a profound misogyny which underlie the frolics. Nonetheless, there are still glimmerings of the rich style, and darkly humorous view of life, which first brought Fischer to prominence. At one point, for example, the central character muses on the ultimate uselessness of good advice 'I'm not sure there's anything you can do to help anyone. I'm not sure you can even help yourself. I saw a squirrel today jumping from one tree to another, the branch it landed on snapped. So the squirrel was on this falling branch, clambering like mad, thinking it was doing something about it.'

A recent collection of stories, Don't Read This Book if You're Stupid (2000), collects Fischer's published short fiction of the 1990s. Again, remarkable erudition, technical fluency and great inventiveness are in evidence, but there remains, in comparison to the unusual force of Under the Frog, the sense of an author either marking time, or subject to a narrowing of his moral imagination to a space of libidinous, laddish whimsy.