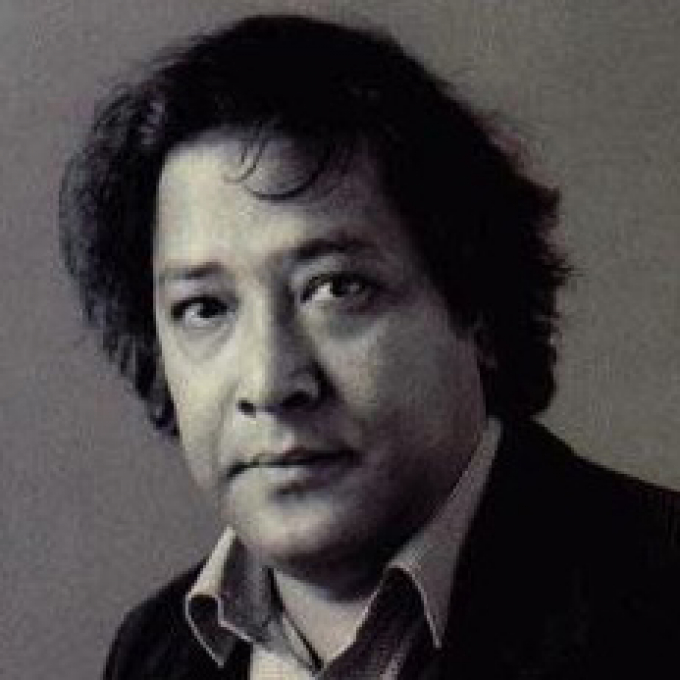 Shivadhar Srinivasa Naipaul, known as Shiva, was born in 1945 in Port of Spain, Trinidad (now Republic of Trinidad and Tobago). His literary ancestry is impressive: his father, who died when Naipaul was a young child, was Seepersad Naipaul, a journalist and short-story writer, while his elder brother is Sir V.S. Naipaul, internationally acclaimed author and winner of the Nobel Prize in Literature.

During his short lifetime, Shiva Naipaul felt somewhat overawed by the success of his brother (who was almost 13 years his senior), and his posthumous reputation continues to be overshadowed by that of the elder Naipaul, though a number of critics regard the brothers as equally talented.

The Naipaul family were part of the Hindu community, descended from Indian migrants who had arrived in Trinidad in the 19th century. Shiva Naipaul was educated at Queen's Royal College and St Mary's College in Port of Spain, where he won a prestigious Island Scholarship which enabled him, like his brother, to study in Britain. He enrolled at University College, Oxford in 1964, initially studying psychology, philosophy and physiology, before later changing to Chinese. He settled in Britain, marrying Jenny Stuart in 1967; their son was born in 1973.

Naipaul's first novel, Fireflies, was published to great acclaim in 1970. Set in Trinidad's Indian Hindu community, this tragi-comedy depicts the decline of an affluent Indian family struggling to adapt to a changing society. It was followed by The Chip-Chip Gatherers (1973), which continues to explore Trinidad's Indian community.

Naipaul then wrote two non-fiction works: North of South: An African Journey (1978) is a combination of travel writing and political writing based on the author's six-month visit to Kenya, Tanzania and Zambia, while Black and White (1980) (published in the US as Journey to Nowhere) is Naipaul's study of the Jonestown Massacre of 1978, in which almost 1,000 members of Jim Jones' People's Temple cult committed suicide.

After a 10-year break from fiction, Naipaul published a third novel, A Hot Country (1983) (published in the US as Love and Death in a Hot Country). Much darker than the first two novels, it presents a bleak and pessimistic view of life in post-colonial society. Beyond the Dragon's Mouth, a collection of stories and essays, was published in 1985.

Naipaul died suddenly of a heart attack in 1985 at the age of 40. A non-fiction work, An Unfinished Journey (1987), was published posthumously. The Spectator established the Shiva Naipaul Prize for young travel writers in the author's memory.

Naipaul's first two novels, Fireflies (1970) and The Chip-Chip Gatherers (1973), both feature Trinidad's Indian Hindu community. Written in a tragi-comic style, the novels address the challenges and difficulties experienced by this community, in which the author was born and brought up.

Through the stories of several families and various memorable characters, depicted with both insight and affection, Naipaul explores issues of exile; cultural displacement and confusion; the struggle to define one's sense of identity; and the pressures of a changing society.

Fireflies charts the decline of the dynastic Khoja family, who try too rigidly to adhere to old traditions and refuse to adapt to the society in which they live: The Khojas were vigilant in defence of their traditions. They had long regarded themselves as the natural leaders of the Hindu community. There was some justification for this quite apart from their wealth, since there were other Indian families just as rich, if not richer. But, in the eyes of the Khojas, they had abdicated, lapsed into betrayal of the faith. Many of them had been converted to Christianity and … gone into the professions, becoming doctors and lawyers, marrying English wives …

The Khojas, therefore, 'had triumphed by default, renowned not for their achievements, but for their deliberate backwardness and their eccentricities'. In contrast to their high-achieving neighbours, there 'was not a single doctor or lawyer amongst them' (Fireflies).

Naipaul's skill is his ability to illustrate wider themes and issues through compelling and vivid stories of individual characters, along with his use of delightful humour, which prevents the story from becoming too bleak and depressing. Geoffrey Wheatcroft comments that Fireflies is written 'in limpid prose, with a crystal ear for dialogue and comedy. Through the human story of struggle it strikes at the heart of the functioning of the Hindu community in Trinidad' (Oxford Dictionary of National Biography, eds Matthew and Harrison, vol. 40, 2004).

The Chip-Chip Gatherers continues Naipaul's exploration of his native community, once again offering insightful social commentary that is simultaneously heart-rending and humorous - though the comic element is less strong than it is in the first novel and, consequently, there is an increasing sense of bleakness. While Fireflies depicts changing society through the decline of an old family, The Chip-Chip Gatherers features a social-climber who has taken opportunities to better himself. Ramsaran has also followed the path of Westernisation that is so despised by the Khoja family, by converting from Hinduism to Christianity and changing his name from Ashok to Egbert. Yet Naipaul's fiction depicts the flaws in both extremes: in the first novel, the Khojas are shown to be too inflexible in their traditional views, while, in the second novel, Ramsaran is portrayed as egotistical and power-hungry.

In writing his first two novels, Shiva Naipaul stubbornly, and surely unexpectedly, produced two masterpieces … His feeling for perfection and its passing is very much his own; he should be on our bookshelves for giving us a region of the world and the imagination that very few other writers have with such skill and eloquence, such comic mischief and pain.

After the first two novels Naipaul took a break from fiction writing. Instead he turned to non-fiction, producing several acclaimed works which are engaging, illuminating and also quite outspoken - in both his writing and real life Naipaul was renowned for his acerbic tendency to tell it as he saw it. Consequently, he could be controversial, but his sharp tongue certainly makes for compelling reading. North of South: An African Journey (1978), which combines travel writing with social and political commentary, is based on the author's visit to Kenya, Tanzania and Zambia. North of South was acclaimed for its captivating prose, but, as it presents Naipaul's own personal observations, critics noted its lack of objectivity and its harsh, negative assessments of African society and politics (for a particularly useful summary of critical opinion on Naipaul's work, see his entry in Concise Major 21st-Century Writers, Gale, 2006). Nonetheless, the book's candid honesty is also quite refreshing. Geoffrey Wheatcroft notes that, as a non-European writer unburdened by colonial guilt, Naipaul had more freedom to express his views frankly: 'It was too bleak for those bien pensants who wanted to see only the best and the most hopeful in independent Africa. Naipaul was in fact a painfully honest observer …' (Oxford Dictionary of National Biography, eds Matthew and Harrison, vol. 40, 2004).

Naipaul's next non-fiction work commented on a horrific event in Guyana's history: in 1978, almost 1,000 American men, women and children committed mass suicide at the command of their cult leader, Jim Jones, whom they had followed to a remote part of Guyana to live as part of the People's Temple. Shortly after the event, Naipaul visited the site in Guyana in an attempt to understand and interpret the events that led to that fateful day: the result was Black and White (1980) (published in the US as Journey to Nowhere). Again, Naipaul expresses his views strongly and persuasively, finding himself accused of 'anti-Americanism' because of his condemnation of the Californian ideologies that allowed Jones to gain so much power. Black and White is a bold work and an enthralling read, an exhaustive study of a terrible tragedy.

Naipaul eventually returned to fiction. His third and last novel, A Hot Country (1983) (published in the US as Love and Death in a Hot Country), written a decade after his second, is markedly different from the early fiction: though it addresses similar themes, it is devoid of the comedy of Fireflies and The Chip-Chip Gatherers and its vision of post-colonial society is much more dark and despairing. A Hot Country is set in a fictional South American country, Cuyama, a thinly disguised version of Guyana, though, like the first two novels, it also draws on Naipaul's experience of life in Trinidad. Life in Cuyama is bleak and hopeless on every level: politics are pervaded by lies and corruption, poverty is rife and there are signs of social unrest as people are overwhelmed by the frustration of their rotting society, which offers them little hope for the future. Though this concise, brief novel makes for depressing reading - and was not therefore widely popular - it is nonetheless a penetrating book, acclaimed for its masterful storytelling and its spare, understated prose.

In 1984 Naipaul published Beyond the Dragon's Mouth, a collection of fictional stories and non-fiction articles which continue to explore and discuss Indian, African and Caribbean societies, as well as the author's experiences of living in England.

Naipaul's premature death in 1985 sadly prevented him from fulfilling his potential as a writer. D.J. Taylor speculates on the way in which the younger Naipaul may have eventually rivalled his brother's success if he had been given more time:

What would have happened to Naipaul had he lived? … In the end, you suspect that he would have written a book about England, one of those great insider-outsider novels …That he never lived to achieve this feat is one of the great tragedies of modern English literature.