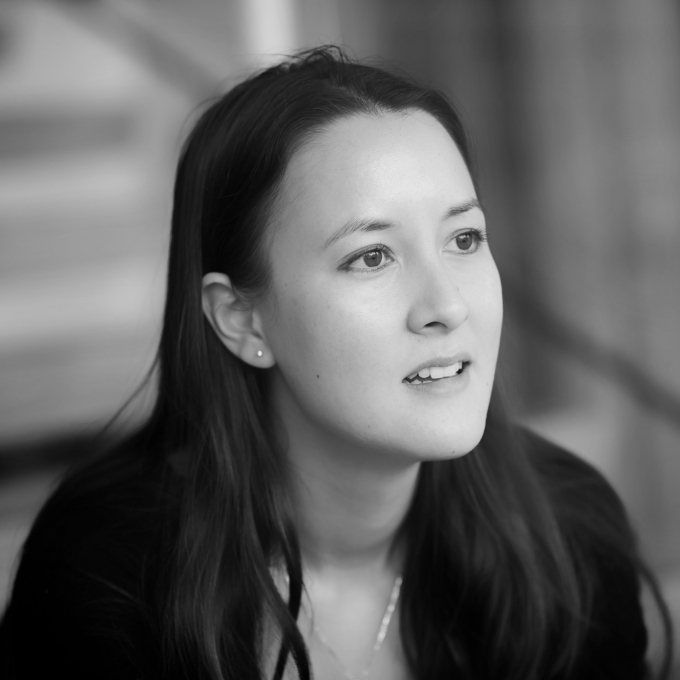 Sarah Howe was born in Hong Kong in 1983 and moved to England as a child.

Sarah was a Poetry Society Young Poet of the Year in 2000 (Simon Elvin/Foyle Young Poets) and published A Certain Chinese Encyclopedia  with Tall-lighthouse in 2009.

She won an Eric Gregory Award from the Society of Authors in 2010. Her first collection, Loop of Jade was published by Chatto & Windus in 2014 and was shortlisted for the Forward Prize for Best First Collection. It won the TS Eliot Prize 2015, the first time a debut collection had won the prize.

Her poems have appeared widely in British magazines including The Poetry Review, PN Review and Poetry London, in anthologies such as The Salt Book of Younger Poets and Dear World & Everyone In It, and on BBC Radio 3 and 4. She has performed her work at events across the country, from Ledbury Poetry Festival to the Royal Festival Hall.

She is the founding editor of Prac Crit, an online journal of poetry and criticism based in Cambridge. She has been a Research Fellow at Gonville and Caius College, Cambridge, where she teaches Renaissance Literature. In 2015-16, she took up a year’s writing fellowship at Harvard University’s Radcliffe Institute.

She was a judge of The Poetry Society's National Poetry Competition in 2015.

Sarah Howe is one of the most admired British poets of her generation, whose growing reputation was confirmed when she won the 2015 T.S. Eliot Prize for her debut collection Loop of Jade. Cerebral and often strikingly austere, her powerfully descriptive work ranges across an impressively eclectic and playful array of experimental forms.

Edmund de Waal has called her poetry 'rich and fierce' and Howe has explored themes such as attention, memory and identity with an unsparing eye for detail and lack of sentimentality.  Her work often exudes a deep scholarly focus, drawing in echoes from multiple centuries of various world literatures and painting, with poems that often approach the methods and dynamics of literary criticism. In this aspect, her life as a transatlantic university academic comes to the fore. Poetry was, she has said, something she did 'under the radar of my official life as a university teacher and literary critic.'

Many of the discussions of Howe's work have focused on her biography. Born in Hong Kong to a Chinese mother and English father, but raised in England since childhood, Howe’s most notable theme is that of the East-West hybridity. As she told Time Out in 2016, 'some of my wariness about labels and categories – British Chinese poet, mixed-race poet, experimental poet, mainstream poet – comes from the fact that so much of my work is about unpacking and complicating such positions.'

Much of her earlier work avoided this theme. She first came to notice as recipient of the Simon Elvin Young Poets of the Year prize in 2001, with such direct work as ‘Why do I hate you now’, overflowing with exhilarating bravado:

I’ll cut your long suffering father from the bondage

It heralded a new voice of striking directness but one that she has largely abandoned since. In the years that followed Howe slowly moved towards discussing the theme of Chinese heritage directly in her work.  As a result, Howe says, 'strangely, poetry became the place where I explored my Chineseness, something that otherwise had no place in my life' (Forward interview). Her next publication was her 2009 chapbook A Certain Chinese Encyclopedia, which won the Eric Gregory Award the following year.

Howe says that she began writing again in earnest whilst studying abroad in Boston. 'I suspect it’s no coincidence', she told the Forward prize website, 'that I began writing poems in earnest during a year I spent living in America, on a scholarship to Harvard shortly after my undergraduate degree. That period of geographical displacement, when home was far away and imaginary again, seemed to wake something in me.' The results of this period of creativity were the poems that would end up in her debut collection. Living overseas allowed her to finally approach her hyphenated identity in a head-on fashion. 'It’s funny how being ‘caught between two worlds’ is such a prevalent theme in my writing,' she continues, 'I began to realise how that tension – endlessly hopping back and forth across a dividing line – might actually be something productive, crucial even, to my sensibility.'

Perhaps the most important of these poems was ‘Crossing from Guangdong’ (a video of Howe reading of which can be viewed here). It told the story of her first encounter with the mainland China that her mother had fled during the Communist Revolution, and a journey that she had cautioned her daughter against.  As its opening lines state:

'Something sets us looking for a place.

For many minutes every day we lose

ourselves to somewhere else'

And so Howe relates the sensations and ambivalences of her 'strange pilgrimage to home' in a China she doesn’t know, and experiences the 'half recognition. These bare moments – something like finding family.' It is partly an address to her mother, framing her trip in terms of her mother’s flight:

the crossing. The same journey you, a screaming

baby, made, a piercing note among grey

The imagery of the bond between mother and daughter and the complexities of comprehension across culture came to pattern the rest of poems she would write over the coming years, returning recursively to the imagery of this Guangdong voyage.

The poem formed the centrepiece of Loop of Jade, the debut collection. It was a diverse and ambitious array of poetry that ranged over a variety of themes, multiple registers and forms. Many of the poems are explicitly framed as dialogues with influences, ranging from Pound, Roethke and Ashbery to the painters Streckfus and Bonnard. The collection ultimately seems to rest upon strange moments of epiphany that relate not simply to an immersion in Eastern routes but the more general intellectual pleasures of 'one of those blurrings – glitch, then focus – / like at a put-off optician’s trip, when you realise/ how long you’ve been seeing things wrongly.'

Yet the running thread communicated by the title tied the collection back to that mother-daughter connection explored in 'Crossing from Guangdong'. As Howe explains, the item that gives the book its name provides a key to this theme:

'is a milk-green bracelet, sized for a baby’s wrist, which my mother’s adoptive mother bought for me when I was born. She took it to the temple to have it blessed and to have my fortune told. Even if it’s not exactly an heirloom, it has some of that emotive force for me, representing as it does the most direct, tactile contact I’ll ever manage with my family’s past. My own connection to my Chinese heritage is always already broken, and not simply by my migration to the West. The jade was given to me by a Chinese grandmother I never really knew and to whom I wasn’t related by blood. In some corner of my imagination, the loop of jade became an object of myth, a fairytale token left to identify a foundling child, a passed-down compass drawing me home.'

The remainder of the collection draws much of its power from the sustained dialogue between Englishness and the world on the 'earth’s other side' and the sensualities of the Chinese language: 'I rolled their sounds around my mouth/ til they were strange again.' Interestingly, poems that might read as potentially overly transparent explorations of transcultural allegiances are often complicated upon second reading by Howe’s awareness of layers of ‘Chinoiserie’, and the long history of Anglophone appropriations of Chinese themes, a tradition she both satirises and places at one remove.

The collection was lavishly praised by many critics. Ruth Padel called it a 'wonderful first collection – it isn’t often you can say exquisite, original, erudite and adventurous all in one breath.' Nonetheless, some took issue with aspects of her austere allusive style. 'Depending on a reader’s taste,' Ben Wilkinson wrote in the Guardian, 'these poems will seem either elegantly graceful, or decorative and over-designed… Howe is at her best when she reins in linguistic excess'.

Loop of Jade went on to see off Les Murray, Don Paterson and Claudia Rankine for the 2015 T.S. Eliot Prize, the first time a debut collection had won. Pascale Petit, the lead judge, praised the 'incredibly ambitious and diverse shortlist', but said that Loop of Jade 'shone with its startling exploration of gender and injustice through place and identity, its erudition, and powerful imagery as well as her daring experiment with form. She brings new possibilities to British poetry.'

In the years since Howe has returned to the US and broadened her scope through multiple collaborations with visual and performance artists. As the Scotsman said of the young poet’s prize-winning collection, the key sensation readers are left with is that of immense promise: 'The haul from this preliminary exploration is considerable, but you sense the mother lode is still to come.'