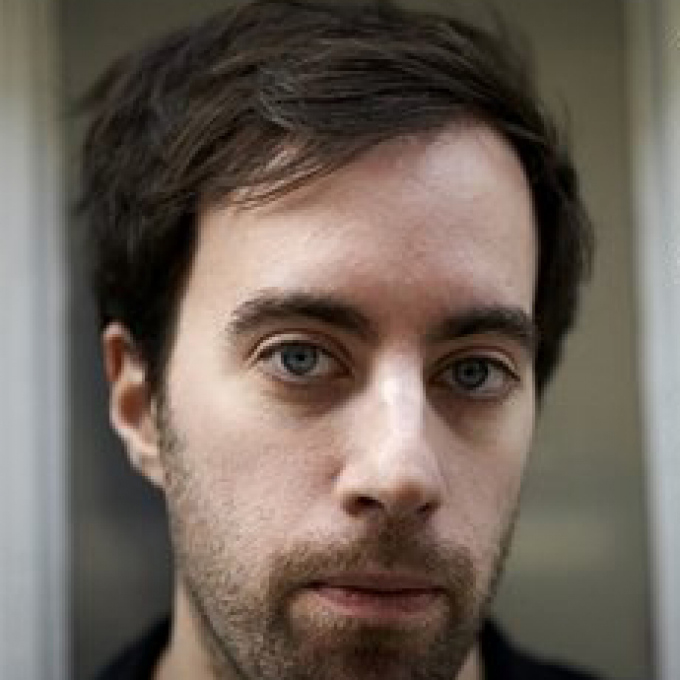 Ned Beauman was born in London.

His debut novel, Boxer, Beetle, won the Goldberg Prize for Outstanding Debut Fiction and the Writers’ Guild Award for Best Fiction Book. His second novel, The Teleportation Accident, was longlisted for the Man Booker Prize.

The flamboyantly postmodern sci-fi comedy noir of Ned Beauman has earned him a reputation as an adventurous rising force of the modern British novel.

Accurately described by the Telegraph as “clever and charming, with an awesome range of reference,” (June 2012), his carnivalesque novels dart nonchalantly between historical moments, stylistic registers, high and low culture, broad comedy and complex ideas. With two impressively different works behind him, the novelist, who was born in 1985, has attracted a following appreciative of the lightness with which he treats both ambitious literary experiment, and some of the most serious and challenging events in modern history.

His debut Boxer, Beetle (2010) tells the bizarre and complicated tale of Nazis, East End fighters and unexplained murder. The main strand is set in contemporary London, where the neurotic historical memorabilia collector protagonist Kevin ‘Fishy’ Broom is unraveling a mystery connected to a note from Adolf Hitler to a mysterious eugenicist Dr. Errskine. For the second setting, Beauman takes us to the world of Spitalfields boxing rings in the 1930s, where the diminutive Jewish boxer Seth Roach is being courted as a potential medical specimen.

The balancing act between these two strands is conducted in a fluent, relaxed style, full of direct narrative address to the reader (“I’m not a secret Nazi. I feel sick when I think about what they did. So do you, probably.”). Switching between historical evocation and reveling in the black humour of the subcultures he depicts, Beauman is engagingly down-to-earth, with flashes of hilarious, ribald sexual humour. At times, however, it might be said that we get too much of Beauman’s postmodern intellectual ruminations and not enough of his characters: as the Independent (August 2010) noted, his “authorial voice blankets all his characters in the same, educated, articulate patter,” and the hyper-erudite asides do lead to a certain tonal monotony

The novel was on one level a simply murder mystery, and reveled in some of the noir-ish attributes of the genre. Boxer, Beetle is steeped in popular culture to an almost whimsical degree. But it was also an intellectual excursion, peppered throughout with allusion to literary history and critical thought, from the grandiose opening epigraph from Theodore Adorno onwards. In some ways, this was a self-consciously neurotic overabundance, and given Beauman’s wry self-awareness in interviews, it is hard to tell quite how seriously we should take his flights of conceptual fancy. All of this might be part of an elaborate literary joke.

Reviewers responded to the eccentricity of the Boxer, Beetle very well. The New York Times labelled it “oddball and rambunctious… funny, raw and stylish” (September 2011). To the Independent, it was a very “fine debut: clever, inventive, intelligently structured, genre-spanning, as magpie-like in its references as any graphic novel, and above all, an enjoyable, high-octane read through a fascinating period in history" (August 2010). “It takes real skill,” reflected Scarlett Thomas in the Guardian, to “make a tragic hero out of the five-foot, nine-toed alcoholic Seth Roach... it's clear from this compelling debut that Beauman can perform the complicated paradoxical trick required of the best 21st-century realist novelists: to take an old and predictable structure and allow it to produce new and unpredictable connections” (August, 2010).

The follow-up, The Teleportation Accident was an even wilder journey, which began in Weimar Germany, and ended in McCarthy-era America. It is so hard to summarise that when it was longlisted for the Man Booker, they attempted it in the following manner:

“Three events occur: In 1679, the ceiling of the Theatre des Encornets in Paris collapses, killing 25 members of the audience… Are the rumours true that Lavicini made a fatal pact with cosmic evil?…  In 1938, at the California Institute of Technology in Pasadena, the physicist Professor Franklin Bailey comes close to perfecting a radical new technology that could win the next war before it starts. But what are the shadowy forces at work on campus?… In 1962, in a small flat in West Berlin, Egon Loeser looks back over his strange and eventful life. From the experimental theatres of Berlin to the absinthe bars of Paris, his biggest question still remains: how can it be that a handsome, clever, charming, modest guy like him couldn’t get laid more often?”

Jumping back and forth in time, and ranging over a myriad of genres, Beauman cast a satirical eye over a range of literary modes, and proved himself adept at burlesquing almost everything he touches.

The reviews were even more positive than for his debut. Time magazine enthused about Beauman’s second as highly “singular novel - singularly clever, singularly audacious, singularly strange – from a singular, and almost recklessly gifted, young writer. This is not fiction for everyone. But for those who stick with it, it’s a wild and wonderful ride” (2013). In the Literary Review, Simon Hammond reflected that  “Beauman excels at both the grand, jostling structure and the individual sentence. His similes are often inspired, his dialogue is frequently hilarious, and his ability to keep all the plates spinning, as the story dashes between years and continents with a large supporting cast, is very impressive" (August 2012).

Various critics have tried to categorise his books, and reviews are peppered with invocations of imagined genres such as ‘postmodern noir’, or ‘hardboiled sci-fi farce’. Of these components, science fiction is particularly clearly central to Beauman, and this kind of work was, by his own admission something of an early obsession and enduring reference point: “until I was 16,” he has said, “I read nothing but science fiction” of this type, and  “I’m sure it's found its way permanently into my writing” (the Guardian, June 2012). But moving beyond such categories is of course what he’s all about. If this is science fiction at all, then it is of the outlandish and fantastical genre-transcending kind associated with Kurt Vonnegut and Douglas Adams.

Another simpler tradition that both Beauman’s books clearly belong to – in their different and oblique ways – is the well-trodden map of the urban novel. Beauman’s own version of this conjures up a compelling network of urban connections. “As I crossed Vauxhall Bridge, the M16 building on my left,” one notable passage of Boxer, Beetle began, “I thought of how a city is just whatever happens to accrete around the intersection of a million secrets: a fox in your garden is a stolen kiss is a pirate radio station is a dead detective is a Welsh Ariosophist with a gun is an ounce of skunk with your greasy chips is the collection of Nazi memorabilia that my employer, Horace Grublock, keeps upstairs in his penthouse flat.” Beauman has spoken before of his admiration for the work of urban historians and theorists such as Mike Davis, and his own depiction of these in both novels betrays a sensitivity to life of the city as organism held together by its own “secrets” and stories.

Beauman has claimed that he is admirably unafraid to challenge the tastes and even the patience of his readers. As he told the Guardian in 2012, “what seems to stick in my mind is praise from the wrong people. Obviously this is incredibly elitist and snobbish, but then that's my prerogative as a novelist. The people who wrote four-star Amazon reviews were almost more annoying than the one- or two-star reviews, because of the way they looked at the book… I wanted to take all the caveats they had and really emphasise those things, to slough off as many of them as possible" (The Guardian, June 2012).

As for this next move, Beauman reports that he is “well under way with my third book which I’ve already sold so it will definitely be published, perhaps in 2012. I’ve not told anyone about the plot, but it will be very different in setting to my first two books. It is set in South London in May 2012 over a few weeks. It’s definitely less ambitious and less wide ranging than my first two books but it’s been incredibly enjoyable to write” (The Cherwell, August 2012).

Ambitious or not, as Time Out have noted, Beauman “is more than comfortable with the hype he's created for himself,” and the inevitable surprises of his next work will be eagerly awaited. Having been included on Granta’s prestigious ‘Best of Young Novelists’ before his 30th birthday, he can justifiably claim to have only just got started.