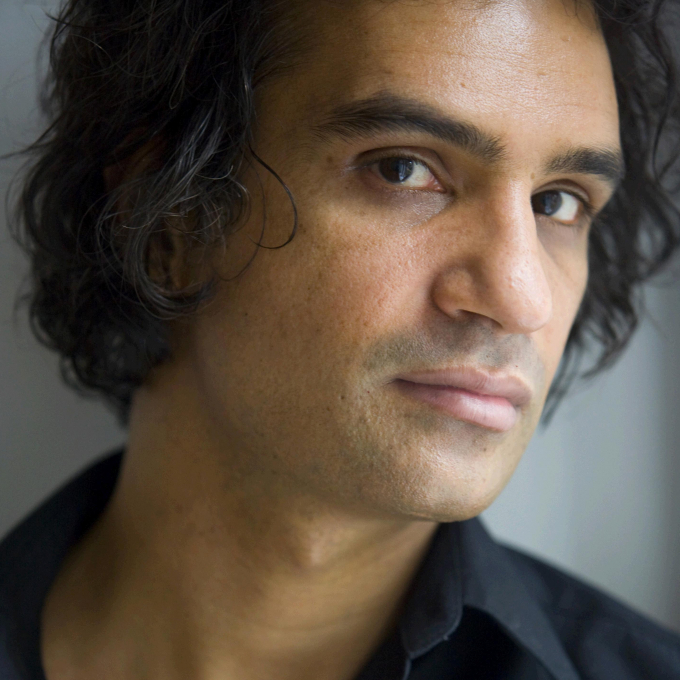 Nadeem Aslam was born in Pakistan in 1966 and moved to the UK as a teenager, his family settling in Huddersfield.

He studied biochemistry at the University of Manchester, but left to become a writer.

His first novel, Season of the Rainbirds (1993), won a Betty Trask Award and the Authors’ Club First Novel Award, and was shortlisted for the Mail on Sunday/John Llewellyn Rhys Prize and the Whitbread First Novel Award.

Nadeem Aslam lives in London. His third novel The Wasted Vigil was published in 2008, its title derived from a painting with the same title by a Pakistani artist, followed by a fourth book, The Blind Man's Garden, in 2013. His most recent book is The Golden Legend (2018) for which he was shortlisted for the Jhalak Prize in 2019.

In a period when so many contemporary writers are associated with the cult of celebrity, with instantaneous success and with hasty, not to mention hefty, advances, Aslam seems content with the longer view, and with quality rather than quantity.

Aslam still writes out his first drafts laboriously in longhand; his second novel took over a decade to complete, and he ruthlessly edits and pares down his own work to the extent that sometimes several sentences are all that are left of 100 pages of manuscript. There is a sense of craftsmanship about his writing, and a time-consuming attention to detail that is rare in a recent fiction. As Aslam has put it of his second novel:

"I wanted every chapter of Maps for Lost Lovers to be like a Persian miniature. In these miniatures, a small piece of paper – no bigger than a sheet of A4 – holds an immense wealth of beauty, colour and detail. Trees have leaves each perfectly rendered. Flowers are moments old and the tilework of the palaces and mosques is lovingly detailed. That was the aim in Maps..."

The same thing might be said of his first novel, Season of the Rainbirds (1993), the cover of the first edition of which is illustrated by a miniature of a tree upon which every leaf is carefully delineated. In the opening pages of the novel we glimpse a domestic scene through the collective consciousness of an anonymous group of children in a tiny town in Pakistan. This world has an innocence and simplicity about it which is, quite literally in places, black and white: "Men with black beards are to be avoided, while those with white beards are kind and gentle". Yet what strikes the reader most is the overwhelming attention to detail in these intricate, delicate paragraphs: the guts of fish, bubbles in a paperweight, the cleaning of a wedding ring with turmeric. The books events are condensed into just a few days, and Aslam draws us into a world of mundane everyday rituals and objects where minutiae are everything. What makes these objects and rituals reverberate with a more general significance is their setting within a landscape of wider cultural, religious and political conflicts. Central to the conflict of Season of the Rainbirds is the unexpected reappearance of a sackful of letters; mail which disappeared in a train crash some 19 years ago. Azhar, the District Commissioner, is responsible for investigating the mystery, and the murderous trail it potentially conceals. However, it is the scandal of Azhar himself, and his affair with a Christian woman, that concerns the town and threatens to overshadow the case. This plot within a plot speaks volumes about Aslam’s writing style, which typically proceeds obliquely, and without the obvious signposts of more manifestly issue-based fiction.

In one of the numerous glowing reviews that appeared on the publication of Aslam’s second novel, Maps for Lost Lovers (2004), a critic in The Observer noted: "This is that rare sort of book that gives a voice to those whose voices are seldom heard." Even this fails to capture the distinctiveness and originality of the narrative voice in Maps for Lost Lovers, which renders England in a manner which feels entirely new, whether viewed from the perspective of mainstream or minority fiction. We open a book divided into four seasons (time is as significant to this novel as it is to the first), and which begins with snow falling from the sky. The weather works symbolically, as it does so often in literature, to confirm location and nation: this is England. Nevertheless, as the book goes on to map a wintery scene, the reader is left as lost as the lovers of the title. We are told that the falling snow "rinsed the air of the incense that drifts into the houses from the nearby lake", children lick at icicles from the railings outside the mosque, there are cherry trees and hyacinths, the lake contains carp. This is not what we are expecting of a grim immigrant town just off the M4. Through the synesthetic description, a sensual, spiritual landscape emerges, and England is effectively orientalised. It is all achieved without the now familiar hybridity associated with certain migrant writers. Nothing is obvious here, and just when we think we’ve got it sussed, the narrative twists again: for all its otherworldliness there is an everyday physicality about this narrative in which children steal cheese graters to craft snowman, and just when the sombre surrealism seems to have established itself, we get the following passage of brilliantly observed humour:

This level of intricacy and nuance took 11 years to perfect, a period of time unheard of for a young writer working in current market conditions.

Given the novel’s title, it is perhaps unsurprising that the precise setting of the book is not divulged, the town is lost in translation: it is renamed by its South Asian inhabitants Dasht-e-Tanhaii, The Desert of Loneliness. Like the anonymous town of Season of the Rainbirds, Dasht-e-Tanhaii is home to an unresolved murder. Chanda and Jugnu are unmarried lovers. Within weeks of moving in together both are dead. The stories of these lost lovers is, like the first novel, tucked away behind other narratives, principally the lives of Shamas (Jugnu’s brother-in-law) and his wife Kaukab. Shamas is a liberal man, Kaukab an unbending and blinkered follower of Islam. Caught between fundamentalism and racism, between religion and secular modernity, this novel is at once a portrait of claustrophobic isolation and an illuminating meditation on global affair after 9/11.