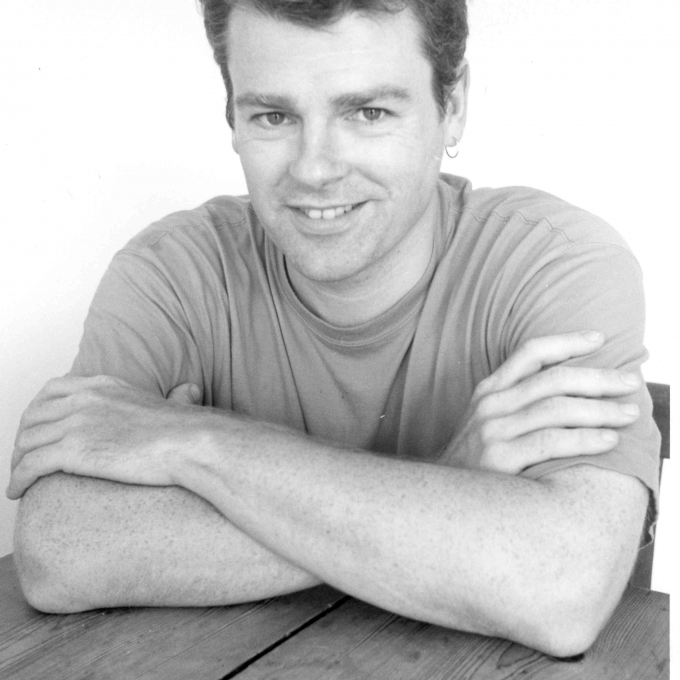 Mark Haddon was born in Northampton in 1962.

He graduated from Oxford University in 1981, returning later to study for an M.Sc. in English Literature at Edinburgh University. He then undertook a variety of jobs, including work with children and adults with mental and physical disabilities.  He also worked as an illustrator for magazines and a cartoonist for New Statesman, The Spectator, Private Eye, the Sunday Telegraph and The Guardian (for which he co-wrote a cartoon strip).

His first book for children, Gilbert's Gobstopper, appeared in 1987 and was followed by many other books and picture books for children, many of which he also illustrated. These include the 'Agent Z' series  and the 'Baby Dinosaurs' series. From 1996 he also worked on television projects, and created and wrote several episodes for Microsoap, winning two BAFTAs and a Royal Television Society Award for this work.

In 2003 his novel, The Curious Incident of the Dog in the Night-Time, was published and has been hugely successful.  It is the first book to have been published simultaneously in two imprints - one for children and one for adults. It has won a string of prestigious awards, including the 2003 Whitbread Book of the Year. His second novel, A Spot of Bother, was published in 2006 and shortlisted for the 2006 Costa Novel Award.

Long before The Curious Incident of the Dog in the Night-time (2003) gave him bestseller status, Mark Haddon - author, poet, cartoonist and abstract painter - wrote the Agent Z series of books. The stories, which are for young teens, are full of the joys of daydreaming. Ben, the narrator, allows his hallucinogenic imagination to transport him beyond the dreary boundaries of the suburban street where he lives. With his friends Barney and Jenks he forms The Crane Grove Gang, which is dedicated to terrorising people through carefully planned practical jokes. As Agent Z, the identity they adopt, they leave stickers at the scene of each of their crimes, as a mark of their triumphs. The books play on the human need to transcend the limits of reality. In one way or another, much of Haddon’s work is about our saving grace as a species: our capacity to wonder and invent. It is also about the way we seek consolation and meaning in that capacity, particularly when the curtain has been pulled back to reveal that God is none other than the Wizard of Oz.

The publication of The Curious Incident of the Dog in the Night-time (2003) brought Haddon critical applause, commercial benefit, and awards. It’s not hard to see why. It stands with D.B.C. Pierre’s Vernon God Little and Lionel Shriver’s We Need To Talk About Kevin as one of the most memorable novels of the early 2000s. It is narrated by Christopher Boone, a fifteen-year-old boy who possesses what Ian McEwan described as an ‘emotionally dissociated mind’ (the back-cover blurb says that Christopher has Asperger’s Syndrome, though there is no reference to this in the book itself). Christopher, who lives with his father in Swindon, tells us all we need to know about how his mind works without the need to attach a label to his forehead. If he sees four consecutive yellow cars it’s a ‘Black Day’; five red cars and it’s a ‘Super Good Day’. Christopher cannot bear physical contact, and there are times when he feels so overloaded by verbal and visual stimuli that he starts to groan or scream. He is able to calculate complicated factoring problems in his head, but cannot read most facial expressions. His mind is logical and literal, and he dislikes metaphor: ‘when I try and make a picture of the phrase in my head it just confuses me because imagining an apple in someone’s eye doesn’t have anything to do with liking someone a lot and it makes you forget what the person was talking about.’ The conceit of the novel - the title of which comes from a Sherlock Holmes story called Silver Blaze - is that it’s the book that Christopher is writing as a school project after discovering his neighbour’s dog dead in the garden. It’s a detective story - the only kind of fiction Christopher likes - and one that takes him not only beyond the world he has known, but also to discoveries of secrets his family and neighbours have long held from him. He’s the victim of falsehood and betrayal, and in light of the emotional chaos that surrounds him, his obsession with facts and figures assumes a heroic quality.

Haddon followed Christopher’s story with A Spot of Bother (2006). Reminiscent of Sue Townsend’s Adrian Mole books and the novels of David Nicholls and Nick Hornby, it’s as easy and enjoyable a read, as those comparisons would suggest. Centred on the experience of the retired George, an ordinary fifty-seven-year old man who is now about to begin the long, shapeless period of life that will be given over to pottering about in the shed, A Spot of Bother deals with ‘the fear of having nothing to complain about’. When George discovers a lesion on his hip, his imagination, which has been an underworked muscle for too long, goes finally to work, transforming the mark into a terrible cancerous growth. As the unavoidable reality of his own mortality begins to undermine whatever foundations he thought he had built beneath him, George struggles to maintain his sanity. The novel moves in and out of the lives and minds of George’s wife, son, and daughter - reading it is like listening to gossip being relayed by someone who knows how to plot real life and how to lighten it all with humour. Haddon has a gift for creating compassion, and is able to make you care about the fate of his characters. Despite the superficially ordinary nature of the plot - husband worries about health, wife has affair, husband and wife’s daughter may or may not get married for the second time to an unsuitable beau, husband and wife’s son may or may not bring gay lover to the wedding - Haddon has a natural feel for the comic treatment of shared experience. This is a story about the messy ordinariness of our lives, lives that revolve not around epic quests of historical significance, but marriages and divorces, love and sex, births and deaths. The novel is particularly sensitive to the effort involved in sustaining even the most intimate of our relationships once romance has become just another thing to work at and compromise over.

Haddon’s next novel, The Red House (2012), is about an attempt at familial reconciliation. After the death of their mother, Angela and Richard gather with their respective families in a house on the Welsh border. They have not seen much of one another for two decades. Their experiences of life, and their memories of their childhood, differ. As with A Spot of Bother, the novel moves in and out of the minds of the characters: a boy, three teenagers, and four adults, but it is now in the key of Mrs. Dalloway. Whereas Haddon’s second novel is light comedy, what he attempts with The Red House is a kind of impressionism:

'Say it began with shadows, that it was shadows always. The sun above us, below us a dark figure that is ourselves and not ourselves. Look how it follows me, see how we dance in time. Narcissus, all of us, right from the beginning. Trace your hand on the rock wall of this cave, using flint, using charcoal. Now the ghost of you will live on after you have gone.'

Although there are moments when this sort of thing convinces, often the author gets carried away, reaching for poetic aptness of the kind that leaves Christopher Boone in confusion. Despite Haddon’s skill at scene-making and drama, and despite his natural ability to get inside the head of a character, there are, in a story about the way the ghosts of our past fight for the possession of our present, too many ghosts fighting for possession of the narrative. Not so The Sea of Tranquillity (1996), one of the most beautiful of the several picture books that Haddon has written, and, at 32 pages, as brief as it is tender and impressionistic. A man looks back at his childhood obsession with space, recalling the sense of wonder and awe he felt at the moon landing, as he watched Aldrin and Armstrong ‘bouncing slowly through the dust’. The story ends with the adult musing upon how he can still lose himself to views of the moon and thoughts of how ‘nothing ever moves year after year’. In a Mark Haddon story, there is usually a looking back and a looking up.

@mark_haddon a vanishingly rare appearance on twitter to say... I am talking with @Arifa_Akbar at the bath festival on sun 15 ma… https://t.co/d8UqZtszUC
(1 months ago)

@mark_haddon @BellevillePL though I'm always wary of the "savant" label. he's just quite good at maths. I was that good at maths… https://t.co/IBTz2rhMzP
(1 months ago)

@mark_haddon @negie_o0p many apologies for the belated reply. I venture onto twitter rarely... I'm not entirely sure I understan… https://t.co/3n6jKqZWho
(1 months ago)