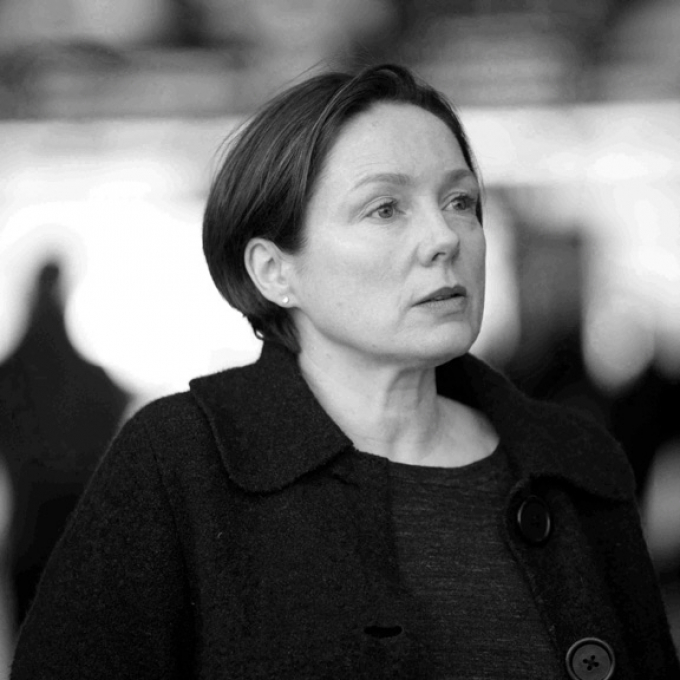 Poet and novelist Lavinia Greenlaw was born in London in 1962.

She read Modern Arts at Kingston Polytechnic, studied Publishing at the London College of Printing and has an MA in Art History from the Courtauld Institute.

She has worked as an editor at the Imperial College of Science and Technology in London and for the publishers Allison & Busby. She was an arts administrator at the South Bank Centre and for the London Arts Board before becoming a freelance writer, reviewer and broadcaster in 1994.

Lavinia Greenlaw was British Council Fellow in Writing at Amherst College, Massachusetts in 1995 and received an Arts Council Writers' Award in 1995, a Wingate Scholarship in 1997 and a three-year fellowship by the National Endowment for Science, Technology and the Arts in 2000. She received an Eric Gregory Award in 1990. Her published poetry includes the collections Night Photograph (1993), which was shortlisted for the Whitbread Poetry Award and Forward Poetry Prize (Best Poetry Collection of the Year), and A World Where News Travelled Slowly (1997). The title poem won the Forward Poetry Prize (Best Single Poem). Her book, Thoughts of a Night Sea (2003), is a collaboration with abstract photographer Garry Fabian Miller, whose pictures prompted Greenlaw's meditations on his imaginary world. Her third collection, Minsk, (2003), was shortlisted for several awards including the 2003 T. S. Eliot Prize. Her fourth collection of poetry, The Casual Perfect, was published in 2011. A Double Sorrow: Troilus and Criseyde (2014) was shortlisted for the Costa Poetry Award and was published in the US by Norton in September 2015.

Her first novel, Mary George of Allnorthover (2001), set in England in the 1970s, was awarded the 2003 Prix du Premier Roman (France) and her second novel, An Irresponsible Age (2006), is set in London in the 1990s. The Importance of Music to Girls, a memoir about the place music has played in her own life, was published in 2007, followed by a book of non-fiction, Questions of Travel: William Morris in Iceland, in 2011. In the same year, she received a commission which resulted in the sound work, Audio Obscura, at Manchester Picadilly Station and St Pancras International. It won the Ted Hughes Award for New Work in Poetry. She has published and broadcast short stories, including We Are Watching Something Terrible Happening, which was shortlisted for the 2013 National Short Story Award.

Lavinia Greenlaw lives in London. She was  the first artist-in-residence at the Science Museum and has also held residencies at the Royal Festival Hall and the Royal Society of Medicine. She is on the Council of the Royal Society of Literature, former Chair of the Poetry Society, and was chair  of judges for the inaugural Folio Prize. She is an artistic advisor to 14-18 Now. She taught at Goldsmiths College, University of London, and was Professor of Poetry at UEA from 2007  to 2013. She is Visiting Professor in Creative Writing at King’s College London 2015-16.

Lavinia Greenlaw’s memoir, The Importance of Music to Girls (2007), is a precisely observed version of her formative years, but also gives us some of the personal contexts of her poetry - for instance, the effect on her of childhood accidents, including once falling through a glass door.

This helps explain the otherwise mysterious lines ‘For a moment the glass forgave me, / curved like a hand that absolutely / loved me, let me down so gently’ (‘The Falling City’). A number of other poems in her most recent collection Minsk (2003), are illuminated by the account she gives of growing up in a family of doctors, amidst the rough and tumble of her siblings. ‘The Spirit of the Staircase’ recalls playing ‘our game of flight’ on new stairs; the children are ‘so tight-knit, / my brother and I once woke up finishing / a conversation begun in a dream’. Music is the subject of a couple of poems; as the memoir shows, music became integral to her growing sense of herself, from ‘the piano years’ to her discovery of punk music style as a teenager. And in ‘Blackwater’, the dreamily imagined landscape explored turns out to be recognizably the coastline of her native Essex, ‘where the county arms are three cutlasses, / each with a bite taken out / by a bored god’.

Greenlaw’s poetry is characteristically taut and elliptical, full of subtle distinctions, from the scientific details of her debut collection Night Photograph (1993) to the journeys and landscapes of later work. Having first come to prominence as part of the ‘New Generation’ poets in 1994, she has been influential through her own work as a writer and broadcaster as well as a longstanding selector for the Poetry Book Society. Night Photograph shows a certain impatience with the traditional concerns of women poets by exploring science, or at least the lives of people affected by scientific breakthroughs, from ‘Galileo’s Wife’ to ‘The Man whose Smile made Medical History’. The latter, her memoir confirms, was about her grandfather who had received pioneering surgery following his injuries during the First World War. The tone of these early poems is cool and detached, but also has a sly humour. ‘For the First Dog in Space’ observes: ‘you’re being sent up in Sputnik 2, / a kind of octopus with rigor mortis’. And in ‘Parallax’, about the 1769 voyage of Captain Cook and Joseph Banks to observe the Transit of Venus, the high-minded purpose is wittily undercut by the distractions of Tahitian women.

Being Writer in Residence at the Science Museum inspired some of the poems in A World Where News Travelled Slowly (1997), most clearly ‘Iron Lung’, ‘Acquisitions’, and ‘In a Dark Room’. The latter depicts early photographer Fox Talbot ‘watching a bottle of salts go dark. / Chancing upon the correct, imperfect solution’. Also significant to the collection is the indirect influence of poets she feels drawn towards, notably Anna Akhmatova and Elizabeth Bishop. Travel, especially in America, and landscapes provide new subjects and perspectives. Relationships, and a strain of erotic restlessness, are alluded to, albeit obliquely. In ‘New Year’s Eve’, the lovers are ‘Silent, elated by cold air, we are drawn to each other. // then drawn back by what sounds like an executioner’s drum’. One of her best-known poems, ‘Guidebooks to the Alhambra’, has a refrain that resonates through much of her writing: ‘Things change, become home and we must leave them’.

Her first novel, Mary George of Allnorthover (2001), is the story of a 17-year-old girl growing up in an East Anglian coastal village during the 1970s, somewhat clumsily discovering her sexuality – and music. Some of it takes place in dreamy flashback; as a small girl, she had been seen as an angel walking on water by a local boy with schizophrenia. His return to the village years later, his obsession with her, leads to the revelation of dark family secrets linking their two families. It is an atmospheric and psychologically intense novel, and skilfully captures the disruptive impact of punk rock at the time. It is delicately descriptive of adolescent emotions, glimpses of a landscape full of light and water: ‘The rain had just stopped, and the sun was still a low pink light that suffused the wet houses with a foreign rosiness and made leafless branches shine’.

Mary George reappears as a band singer and bereaved young mother in her second novel An Irresponsible Age (2006), still haunted by ‘the attentions of mad Tom Hepple who said she could save him’. Set in 1990, this is a relatively sexually explicit novel whose main protagonist is doctor’s daughter Juliet Clough, surrounded by her close-knit siblings and their variously entangled relationships in London and America. The death of a brother in a London bomb attack affects them all: ‘Tobias will go on being dead and we’ll go on rattling about, trying to take up the space he left behind him’. Music provides a linking thread; Mary George and her friend Clara go to see their favourite bands and ‘had worked their way down to something of their teenage selves’. The dilemmas of metropolitan life and love are well-observed, although much of the emotional wrangling of the characters seems to take place almost at cross purposes. Juliet’s illnesses and endemic uncertainty undermines her on-off affair with author Jacob Dart, and she returns from America to London for New Year’s Eve, trying to decide ‘how to move past him’.

The Importance of Music to Girls is, the author cautions, ‘a work of memory – facts have been altered’. The shifting processes of memory indeed form the framework, from waltzing as an infant on her father’s shoes to learning to play the piano, and having adolescent crushes on pop groups. Its subject is how and why music helped define her, through experiences – some vicariously emotional, others physically traumatic - learning that ‘the world reminds you of the body’s limits’. The poem ‘Essex Rag’, in Minsk, conflates her experience of trying to play the piano with the dangerous car-rides she accepted from boyfriends during her teenage years: ‘a collision course bending Chopsticks / into hairpins’. Music became for her ‘a rehearsal of feeling’: of Bob Dylan’s ‘Nashville Skyline’ album, she remarks ‘it provoked emotions and suggested circumstances I couldn’t wait to experience’. And when with girlfriends at discos, ‘the music made me feel as if I had gone through all that anyway’. She explains that she became a follower of punk rock music, and it ‘altered my aesthetic sense completely. This is what music could do: change the shape of the world and my shape within it’. The memoir ends with an almost full circle of lives, discussing music with an ex-boyfriend as she leaves hospital with her new baby. What has been called, in the Poetry Book Society Bulletin, Lavinia Greenlaw’s ‘restless yet acutely observing eye’ is at work throughout her writing, whether in poetry or prose.

@LaviniaGreenlaw RT @ruthpadel: Delighted to offer you this online event in our POETRY AND series at King's POETRY AND - SEEING Nov 2nd 7.00pm with Neil McG…
(11 days ago)

@LaviniaGreenlaw RT @Memories400: In Some Answers Without Questions @LaviniaGreenlaw writes 'I want you to think with me,' which next to @JBXX introduction…
(11 days ago)