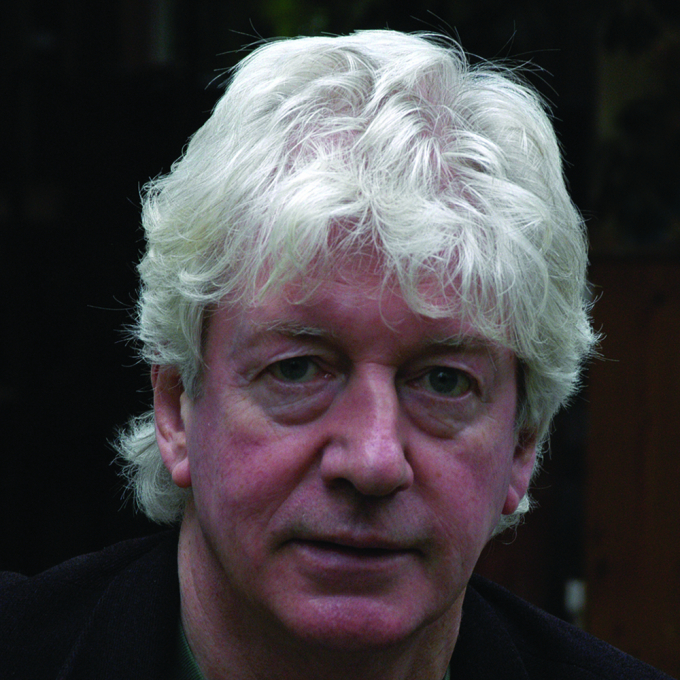 Poet and children's author Kit Wright was born in 1944 and educated at Oxford University.

He lectured in Canada, before working as Education Officer at the Poetry Society in London (1970-75) and was Fellow Commoner in Creative Art at Cambridge University (1977-9). He was awarded an Arts Council Writers' Award in 1985.

His books of poetry include The Bear Looked Over the Mountain (1977), which won the Geoffrey Faber Memorial Prize and the Alice Hunt Bartlett Award, and Short Afternoons (1989), which won the Hawthornden Prize and was joint winner of the Heinemann Award. His poetry is collected in Hoping It Might Be So: Poems 1974-2000 (2000).

Recent books of poetry include The Magic Box: Poems for Children (2009) and Ode to Didcot Power Station (2014).

‘Poetry’, from Kit Wright’s award-winning collection Short Afternoons (1989), opens with a characteristically irreverent dig at the pretentious claim made for the art by William Carlos Williams: ‘When they say / That every day / Men die miserably without it: / I doubt it.

// I have known several men and women / Replete with the stuff / Who died quite miserably / Enough’. It goes on to debunk further dubious statements by Pound and Shelley, before neatly concluding with his own quite different view of poetry: ‘I liked what vamped me / In my youth: / Tune, argument, / Colour, truth’. Wright’s use of simple rhyming forms for comical ends is typical throughout his work (whether for adults or children). It indicates where his poetic allegiances lie – with Betjeman, and with maestros of Light Verse such as Gavin Ewart, Roger McGough and Wendy Cope. Like them, however, he has his darker side, whether memorializing friends or reflecting upon the great imponderables of love, life, death and the ageing process.

Since the 1970s, Kit Wright has become one of Britain’s best-loved poets, much in demand for readings, residencies and even Public Art projects (recently facilitating local writers to enrich a coastal walkway at Plymouth). He is popular in schools and with young readers. His first such volume was Rabbiting On: and Other Poems (1978), full of wordplay and jaunty effects, as in ‘Uncle Joe’s Jalopy’: ‘It’s a dumpy little jumpy little number/ And it doesn’t pay to sleep and it doesn’t pay to slumber’. His perennial skill with tongue-twisting rhymes was already in evidence: ‘Gert Sturt put on Bert Sturt’s shirt/ And Bert Sturt put on Gert Sturt’s skirt’ (‘My Party’). The fun continues in Hot Dog and Other Poems (1982), its best-known poem featuring the king of carpet salesmen ‘Watch Out, Walter Wall!’, with others about small boys in scrapes, odd family members and animals. He notes birds ‘sat in a Big White Bra/ That swung as it hung/ On the washing line’ (‘Pride’). His poems for children are collected in The Magic Box (2009).

Some of the whimsical humour of his children’s verse, and certainly its facility in wordplay and rhyme, passes into his adult works. ‘Humpty Dumpty: The Official Autobiography’, for instance, appears in his first full collection The Bear Looked Over the Mountain (1977). However most of its other poems strike quite different tones, in slices of his time in Canada and the USA, as well as an elegy for his father (‘Deathbed Observation’). There’s the exuberant ‘Fortunes of War’, in which the poet’s friend is Trojan Cassandra, now London-based, who ‘prophesies’ the horses. The most evocative are quietly moving meditations on ‘Love and Money’, the pleasures of music in old age, and ‘how the mindless / Heart has nowhere to go / But learns by touch in the dark’ (‘Characters of Light’).

By Bump-Starting the Hearse (1983), Wright shows still more variety. His persistently ribald note is allowed full play, as in ‘Dungoblin’ and, more amusingly, in ‘Personal Advertisement’: ‘LONG-FACED / LANKY / EVANGELICAL / WIFE EVANGELICAL / … MOTHER-IN-LAW / EVANGELICAL / CRANKY / SEEKS ANYBODY / VIEW / HANKY-PANKY’. (Carol Ann Duffy is an admirer of what she has called Wright’s ‘enviable virtuosity’: this poem, and perhaps a few others, find an echo in her works). By contrast, ‘I Found South African Breweries Most Hospitable’ is a bitterly satirical monologue, in the voice of a mercenary cricketer on a rebel cricket tour of apartheid-era South Africa. This voice repeats ‘My only consideration is my family’, then lists tortures and atrocities; yet ‘None of these things am I paid to believe a word of’.

Short Afternoons, which won the Heinemann Award in 1990, is arguably his most accomplished volume, showing a mastery of comic timing as well as pathos. This is exemplified in ‘Star and Garter’, a bawdy pub tale of an old woman supping Guinness, buttressed by funny rhymes. Her callings-out are hilariously embarrassing: ‘As we turned, the self-same source / Cackled with redoubled force: // My husband / Was hung like a / HORSE!’ Comical bathos is also effective in ‘How the Wild South East Was Lost’, while ‘Correspondence’ and ‘Bloody Drama’ continue his satirical assaults on artistic pretension. The latter arises from watching a play about Byron and Shelley, and concludes: ‘The malaise / Is poems don’t change systems. Nor do plays’. The title poem is a surreal vision of London, summoning up images ‘freighted with dangerous meaning’ alongside the everyday. To the faces in pubs on the Holloway Road, ‘the singable circumstance is being alive’.

The opening section of Hoping It Might Be So: Poems 1974-2000 (2000), contains then-new material. Again there are some echoes of his work for children, as in ‘A Horrible Old Man Reads a Cookery Book’, but also in a poem opening thus: ‘At last I concede I am Beryl the Peril’s Dad’. ‘I’ve died many times’, it continues, 'as a flat board under a steamroller, / all in fun’. Then a more sinister tone concludes: ‘it gets darker / out in the garden behind the house / … Where/ is that girl?’ There is a distinctly Betjeman-esque manner at times. We find suburban celebration in ‘A Love Song of Tooting’, gentle satire of Cunard’s cuisine (‘Fish-Balls’), and ‘Advice for Attending a Hundredth Birthday Party’: ‘Anticipate / a certain amount / of accidental bullying off with walking sticks / on the part of the senior guests’. There is delightful comic parody in ‘The All Purpose Country and Western Self Pity Song’ and ‘The Orbison Consolations’. Yet, again like Betjeman, awareness of death in the midst of life is ever-present. ‘Missing, 1944’ is in the voice of a widow having a visitation from a dead bomber pilot. And an adjacent poem wonders, ‘What can we do for them, the dead / Who belong to us, in sleep and in waking dream / Returning, always returning?’ (‘Belongings’).

The latter mentions ‘the mother who made us and kept us’; Wright has paid several poetic tributes to his much-loved mother over the years. Indeed, this is the case in ‘Beak’, published in the Times Literary Supplement (1 January, 2010). Only six lines long, the poem wonderfully places her memory amidst the contemporary scene, in its scenario of falling asleep on a train. ‘And I dreamed of knitting, is this what they call woolgathering, / Dreamed of my mother purling and plaining to patterns / In Woman’s Own and Woman’. Jolted out of his reverie, ‘I woke to a woman / Whose long mauve thumbnail was sharpened into a spike / And she texted, texted, texted, with that pecking beak’. Sharp, witty, humane, Kit Wright’s powers of evocation, elegy and satire appear to be undiminished.