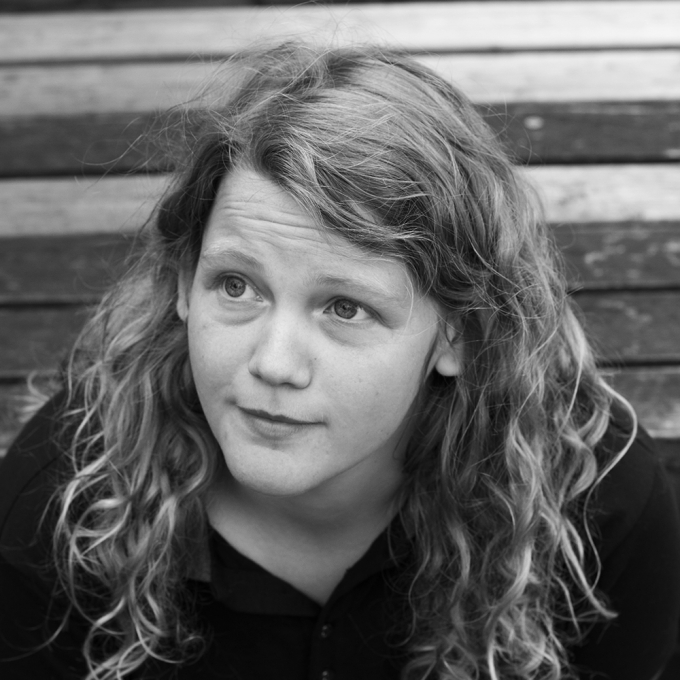 Kate Tempest is a playwright, poet, novelist and spoken word artist. She began performing when she left school at the age of 16. As a teenager was support act to various key cultural figures including Benjamin Zephaniah and Billy Bragg. She has since emerged as one of the U.K.’s most recognised performance artists, drawing large crowds at Glastonbury and Leeds Festivals. Her influences range from Wu-Tang Clan, to modernist poetry, to Tracey Emin. Tempest was visiting fellow at University College London in 2015. Neil McCormick has described her as ‘Britain’s most acclaimed young performance poet, Tempest can dazzle with scansion and flow, cadence and rhymes, but crucially employs her verbal skills in the service of big ideas – about poverty, identity, consumerism – and strong emotions.’

Kate Tempest works across the shrinking gaps of a steadily converging media industry. Equally at home within the genres of theatre, performance, poetry and music, her name now appears on album covers, poetry books, and billboard hoardings. It is fitting then, that her individual works blend elements of oral, sonic, visual and written culture. As a commentator in the Guardian wrote in 2013:

'Her spoken-word performances have the metre and craft of traditional poetry, the kinetic agitation of hip-hop and the intimacy of a whispered heart-to-heart… drawing on ancient mythology and sermonic cadence to tell stories of the everyday.'

Her 2016 work, Let Them Eat Chaos, was published by Picador, composed for live performance and released as an album of the same name. It sits somewhere between sermon and epic poem and like much of her work to date, experiments with voice, vocality, and multiple points of view. It is an apocalyptic narrative, describing a world falling apart through words that (in the print version) float free on the page:

An endless and unmoving blackness

Or the absence, at least

Moving between the global and the local, Let Them Eat Chaos revolves around the lives of seven neighbours who live on the same London street. They appear as atomised as the fragmenting world that sustains them: strangers to each other even though they share the same experiences of powerlessness, alienation and despair. But when a storm of biblical proportions wakes them in the early hours, they are forced together and the chance to unite suggests the faint possibility of a new dawn.

Tempest’s big themes, or perhaps targets is a better word, are global inequality, capitalism, celebrity culture, environmentalism, the failure of politicians, urban gentrification. The predicaments facing the characters of Let Them Eat Chaos are in this sense the same as those facing the characters of her debut play, Wasted (2013). Wasted captures a day in the life of three twenty-somethings, friends who are gathered to mark the death of a friend. Already, the lives of these characters are scarred by a sense of inertia, of being wasted. For Danny, Ted and Charlotte, wasted has progressed from being a verb- something you do from time to time- to being an ontological state, a way of being. But their coming together in order to mark the wasted life of their friend also provides the opportunity for retrospection and with that comes the possibility of change.

Some critics have dismissed Tempest’s work as the hollow posturing of a white rapper (see Lloyd Evans’ damning review in The Spectator). Others, such as Alexis Peditris, have argued there is more to Tempest’s oeuvre than mere worthiness: ‘You could argue that it offers a pretty well-thumbed checklist of liberal woes, but as Tempest’s voice gradually rises in anger over the clanking rhythm track midway through Europe Is Lost, it’s hard not to get carried along with it. That’s partly because, however unsurprising her targets, her writing is often brilliantly acute, not least on the solipsism of latter day pop culture: "Saccharine ballads and selfies and selfies and selfies and here’s me outside the palace of me."’

The cultural establishment seem to agree: commissioned by the BBC and the Royal Shakespeare Company, fated by the Arts Council and asked to curate the 2017 Brighton Festival: the country’ biggest multi-arts event, Tempest’s work has struck a wider chord. In 2013 her book Brand New Ancients won the Ted Hughes prize. An epic poem, ‘written to be read aloud’, Brand New Ancients is as oxymoronic as its title suggests. The book is a lament for our modern day disconnection from classical myth: 'In the old stories, the gods walked among us./ Fought with each other to save us, ‘cos they loved us, […] But now we have distant pin-ups, untouchable, shining,/advertisements lying with their hands on their hearts while we gaze up smiling.’

If there is a certain nostalgia here for a golden age long gone, Tempest’s faith in the ‘everyday odysseys’ to which we have grown blind, registers a universe in which the past lives on, precariously. The gods in this brave new world do not occupy Buckingham Palace, or 10 Downing Street, but the ‘betting shops’, ‘the caff’, ‘the office blocks’. Tempest plays the part of muse to those other gods (people like Kevin, Brian, Jane, Tommy and Glory) with ‘no oracles to translate’ their desires and fears: ‘Yes, the gods are on the park bench, the gods are on the bus,/ The gods are all here, the gods are in us’.

Published a year later, Tempest’s Hold your own (2014) continues to explore Greek myth for the ways it sheds light on modern day experience. In this collection it is Tiresias, the blind prophet perhaps best remembered from TS Eliot’s The Waste Land, that provides the framing lens. In Eliot’s poem gods offered no salvation, but Tempest presents us with more than a heap of broken images for the twenty-first century. As the poem’s title suggests, resistance remains an alternative.

Tempest’s first novel, The Bricks That Build Houses (2016) resonates with the themes of all of her previous work, while specifically reworking the lyrics of her debut album, 'Everybody Down'. The book’s built environment is squarely south London. Like Brand New Ancients, which also opens with an epigraph from Blake, The Bricks That Build Houses is dedicated not just to people but the places from which they hail.

The story unfolds in the inner-city streets of Lewisham, New Cross, Brixton and Deptford, environs that throng and pulse through the veins of its central characters: ‘It gets into your bones. You don’t even realise it, until you’re driving through it, watching all the things you’ve always known and leaving them behind. They’re driving past the streets, the shops, the corners where they made themselves. Every ghost is out there, staring. Bad skin and sunken eyes, grinning madly at them from the past. It’s in their bones. Bread and booze and concrete…’ The novel’s multi-generational plot captures the ghosts and ancestral memories of the streets in a narrative that sees Lewisham emerge as unlikely alternative to Zadie Smith’s Willesden.

The city is the locus classicus for Tempest’s central themes. It is here that the extremes of capital produce unprecedented waste and ruins, and where alternative energies and forms of wisdom can be found. As Tempest puts it in interview: 'The pace that it gives us, the teachings, the ancientness of all of these layers of time and life being built on top of the other. London especially, it goes deep, you know? The souls of the city are everywhere, living and dead. Especially if you’re the kind of person that’s hungry for life, in a city: there it is.' 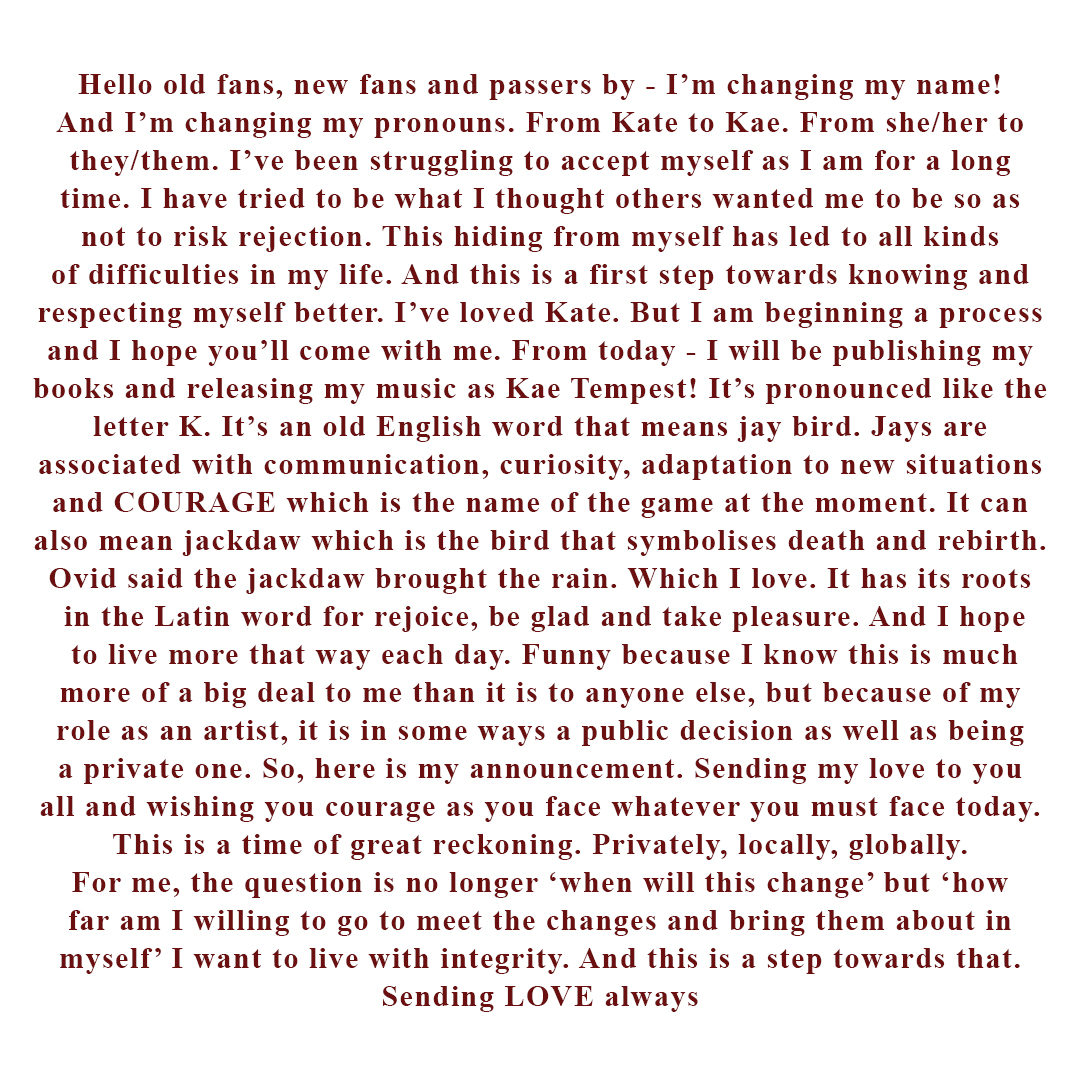