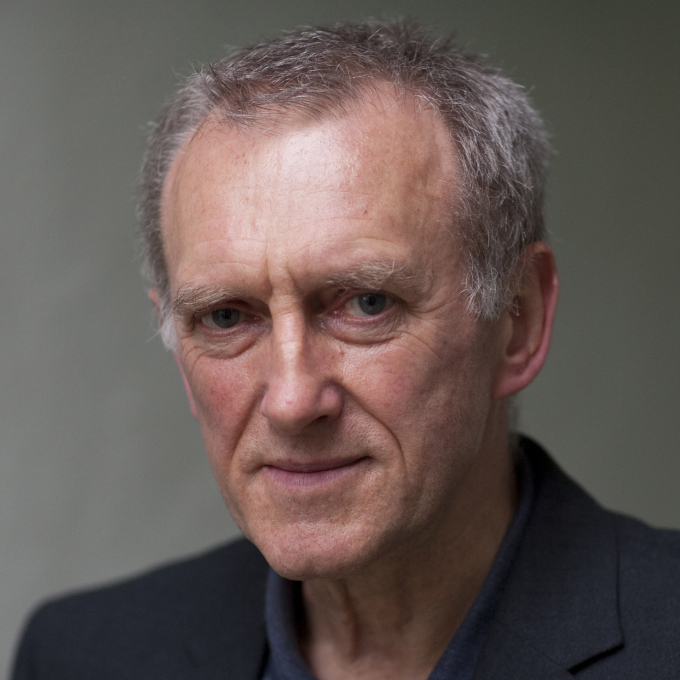 James Kelman's early fiction includes the short-story collections An Old Pub Near the Angel (1973) and Not Not While the Giro (1983), and the novels The Busconductor Hines (1984) and A Chancer (1985). He gained wider recognition in the U.K. with Greyhound for Breakfast (1987), winner of the Cheltenham Prize, and the novel, A Disaffection (1989), which won the James Tait Black Memorial Prize (for fiction).

He is the author of a television screenplay, The Return (1991), and has written many plays for radio and theatre. Hardie and Baird, and other plays was published in 1991.

James Kelman is one of the writers of the new Scottish renaissance of the 1980s and '90s, who responded to Scotland’s place in the emerging global economy by imagining Scottish urban experience in literature.

His work is particularly noted, along with that of Tom Leonard, for its demotic spelling of the Glasgow vernacular. His novels provide accounts of the internal mental processes of their usually, but not exclusively, working-class narrators. His early work was particularly praised for its inventive response to the conditions of late Capitalism from the point of view of those dispossessed by it.  His own novels and short stories do not merely reproduce the hierarchical forms of English literature which create such exclusions in the first place, but seek to leave their own mark on the form of the novel itself. In this respect he could be characterised as a late Modernist in the tradition of other Scottish Modernists such as Hugh MacDiarmid. His novels also demonstrate the influence of European and North American writing rather than the English novel itself. It is often commented upon that his interior monologues and labyrinthine struggles with authority resemble the configurations of the novels and short stories of Franz Kafka. The free indirect style of his narrations have a family resemblance to those of James Joyce.

Equally, Kelman’s own unique consideration of the world his characters populate might also qualify him as an exemplary postmodernist. He could be viewed as a politically engaged writer who subverts the cultural space of globalisation and its effects on the regional. He has published a collection of political essays called Some Recent Attacks: Essays Cultural and Political (1992). It is telling that while global Capital seeks to reduce international culture to the selfsame, writers such as Kelman insist on the efficacy of specific local identity, ensuring that the postmodern is as much about fragmentation as it is about totalisation. Thus Kelman’s oppositional politics are more importantly a response to the world hegemony of neoliberalism than a familiar and ultimately dispiriting complaint about Scotland’s relation to the Westminster parliament. Since Scottish devolution in 1999, much of the impetus for writers such as Kelman, Gray and Lochhead has been dissipated in the disappointments of the new Scottish parliament. His recent writing has now turned its face from the unique circumstances of the Scottish experience and responds to the imminent threat of the Bush administration’s global ambitions.

Although Kelman sets out to distance himself from the English metropolitan media and publishing apparatus, his writing has found an appreciative audience in the English broadsheet press. His novel, A Disaffection (1989) was nominated for the Booker Prize for Fiction while How late it was, how late (1994) won the Booker Prize for Fiction in 1994. It should be said that the award for How late it was, how late sharply divided opinion along predictable lines with outraged bluster from The Times columnist Simon Jenkins and from one of the Booker judges, Rabbi Julia Neuberger. Since this recognition by the Booker jury, Kelman’s reputation as one of the most important contemporary writers of the novel in English has been secured.

The multiple aspects of Kelman’s work can be exemplified by a consideration of one of his early novels. In A Disaffection, Patrick Doyle is a young teacher in a Glasgow comprehensive school. Like Kelman himself, Doyle has participated in the system of Scottish higher education and finds himself alienated from its processes leaving him disaffected, frustrated and increasingly bitter at the prospect of a lifetime in the system. Doyle is a working class Glaswegian who has entered the milieu inhabited by the middle-class as a consequence of his education. However, this education has also empowered him to recognise the repressive reproductive power of the very system which produced him. Unlike many similar writers, he does not attempt to negotiate with the violence which produced him, but rather seeks, in a typically Kelman-like way, to rebel against the powers that confront him. To this end he ultimately quits his job and returns to the environment from which he emerged, finishing the novel drinking cans of super lager in his working-class brother’s flat. Kelman’s anti-heroes tend to be rebels rather than revolutionaries, who alienate themselves from the social structures that surround them, leaving them as lone observers of their own disaffection rather than individuals who through individual or collective agency effect change in those structures. His characters are too engaged in their own political impotence to transform anything other than their own status.

The opening paragraph of the novel demonstrates many of the aspects of Kelman’s writing which place him in  relation to the European novel.

'Patrick Doyle was a teacher. Gradually he had become sickened by it. Then a very odd thing happened or was made to happen. He had been himself round the back of the premises for a pish, and discovered a pair of old pipes. They were longish and reminded him of English saxophones from a bygone era, the kind that reach to the floor and are normally performed on by seated musicians. Now by no means whatsoever would Patrick have considered himself a musician – if anything his secret hankering was to be a painter, doing fairly large murals. He could imagine covering the gable ends of tenement buildings, or even better, the interior walls of tenement closes, inserting various nooks and crannies and twists and corners; evil shapes and sinister figures – different things: but always inclining toward Goya’s work of the black period.'

The opening denominative sentence reminds us of the enigmatic declarations of Kafka. The scatological detail couched in subordinate clauses recalls the opening chapters of Ulysses. There are intertextual references to culture, suggestive not of a subaltern voice, but of an individual empowered by his education to both eruditely comment on his condition and return his knowledge against the institutional apparatus which originally produced it. The voice of the narrator at this point is that of a traditional third-person or omniscient narration. In this respect Kelman stands in a position of authority in relation to his characters. However, he is quick to move from this opening into a position of immanence with Doyle, allowing his characters' thoughts to intrude within the narrative voice of the novel.

'The pipes were strange kind of objects in the response Patrick had for them. It was immediate to begin with. As soon as he saw them it was, Christ! And he shook his head, still just standing there, staring at the two of them.'

Like Joyce, Kelman is a benificient narrator who moves between the planes of omniscience and immanence and who pays attention to his disenfranchised characters.