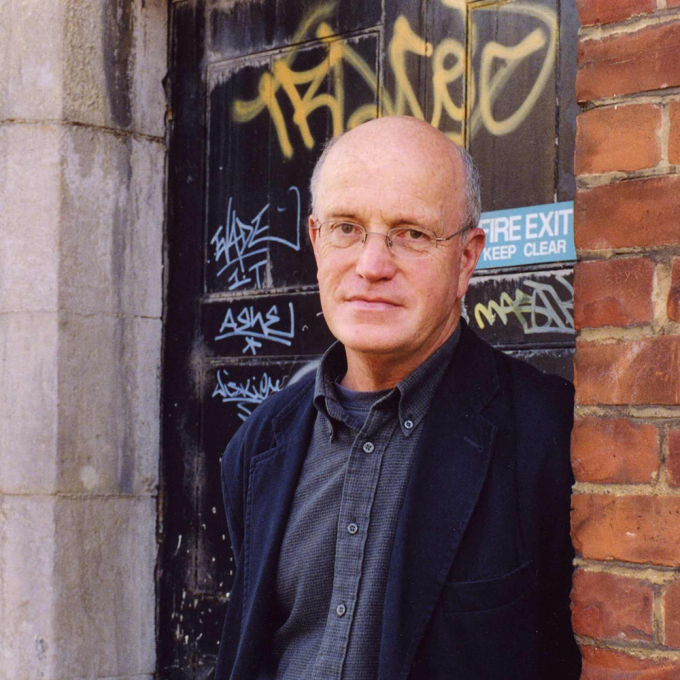 Iain Sinclair was born in 1943 in Cardiff, and studied at Trinity College, Dublin, the Courtauld Institute of Art, and the London School of Film Technique.

His early work was poetry, published by his own Albion Village Press, and including the collections Lud Heat: A Book of the Dead Hamlets (1975) and Suicide Bridge: A Mythology of the South and East (1979). He was connected to the British avantgarde poetry scene in the 1960s and 70s involving J. H. Prynne, Douglas Oliver and Brian Calting. He also edited the 1996 poetry anthology, Conductors of Chaos.

The city of London is central to his work, and his books tell a psychogeography of London involving characters including Jack the Ripper, Count Dracula and Arthur Conan Doyle. His non-fiction works include Lights Out for the Territory: 9 Excursions in the Secret History of London (1997); London Orbital: A Walk Around the M25 (2002); and Edge of the Orison (2005), a reconstruction of the poet John Clare's walk from Epping Forest to Helpston, near Peterborough.

His latest book is Hackney, That Rose-Red Empire (2009), shortlisted for the 2010 Ondaatje Prize.

Iain Sinclair is a prolific writer of fiction, poetry and non-fiction, and has collaborated on a number of film projects including The Falconer (1998).

His first publication was Back Garden: Poems and Stories (1970), but it is with later books such as Lights Out for the Territory: 9 Excursions in the Secret History of London (1997) and London Orbital: A Walk Around the M25 (2002) that he has reached the wider reading public. He has become renowned for using London and its environs as a central theme and has been compared with writers such as William Blake and William Burroughs.

Sinclair’s depictions of London (in fiction and non-fiction) have become associated with the term psychogeography. Simply defined, this means that the influence of place on the emotions is explored and made explicit. This concept has its roots in Situationism, and Sinclair describes the territories he examines with this in mind. He explains his working definition of psychogeography in an interview with Stuart Jeffries: ‘For me, it’s a way of psychoanalysing the psychosis of the place in which I happen to live. I’m just exploiting it because I think it is a canny way to write about London’ (The Guardian, 24 April 2004).

Sinclair often makes his notes of the geography and history of his environment as a pedestrian, and the subtitle of London Orbital (A Walk Around the M25), should be interpreted literally. In Lights Out for the Territory, the value of walking is elaborated on: ‘Walking is the best way to explore and exploit the city; the changes, shifts, breaks in the cloud helmet, movement of light on water …. To the no-bullshit materialist, this sounds suspiciously like fin-de-siècle decadence, a poetic of entropy – but the born-again flâneur is a stubborn creature, less interested in texture and fabric, eavesdropping on philosophical conversation pieces, than in noticing everything.’ This embrace of ‘everything’ is translated into obsession in his writing and this is, perhaps, the reason behind his appeal. His love of obscure detail, as laid out in works such as London Orbital, engage the reader in the unlikeliest subject matters. Because his interests are the central source of his narratives, the reader is caught up in his journeys and in the connections he allows the reader to make between places and time. Superficially, his thoughts appear to meander, but this tends to mask how tightly structured his writing is.

Edge of the Orison (2005), which traces John Clare’s journey out of Essex, has been described by Sinclair as the third in a ‘hobbled trilogy’ (Argotist Online 2005), with Lights Out for the Territory and London Orbital being considered as the first two. Edge of the Orison extends beyond London as Sinclair re-walks John Clare’s escape from an asylum in Epping Forest. This is a biography of sorts, but is also contemporary and autobiographical as Sinclair inserts himself once more.

The pleasure taken by Sinclair (and the reader) as involved spectator is explained by him as being based on a lack of expectation by others: ‘There’s always a warm glow in not belonging, in being the only abstainer at a fleadh in Ballycastle, the only non-Iberian bull-runner in Pamplona who hasn’t read Hemingway; it means that you’re not responsible. You don’t have to enjoy yourself. It’s not part of the contract to become one with the spirit of the place’ (London Orbital). This should not be misread, though, as Sinclair assuming a distance from events, because he experiments in a process of becoming a part of his environment as he records it.

He is a consciously subjective observer and this is also apparent in his political stance against Thatcher’s rule as prime minister. His novel, Downriver (1991), for example, fictionalises her legacy of ruin. Generally, however, it is fair to say that political thought is not used dogmatically in his work. Instead, he offers biased perspectives without demanding agreement.

His earlier novel, White Chappell, Scarlet Tracings (1987), marks the beginning of his acceptance by the literary establishment and Downriver built on this success. This latter work was awarded the Encore Award and the James Tait Black Memorial Prize (for fiction) in 1991, and received strong praise from the critics.

With regard to Sinclair’s investment in poetry, his introduction to Conductors of Chaos: A Poetry Anthology (1996), which he also edited, goes some way to explaining his personal taste: ‘The work I value is that which seems most remote, alienated, fractured. I don’t claim to "understand" it but I like having it around.’ His link to poetry is long-standing and can be traced back to the 1960s and his connection with J.H. Prynne and Douglas Oliver. Of his own work, Lud Heat: A Book of the Dead Hamlets (1975) is an early example of his verse and prose, and of his interest in the influence of place. Here, Sinclair uses Nicholas Hawksmoor’s London churches and mysticism as sites of inspiration, and this work, in turn, has been drawn upon and acknowledged by Peter Ackroyd in his novel Hawskmoor (1985).

Sinclair’s connection with London has continued as his more recent edited collection of essays in London: City of Disappearances (2006) attests. As Peter Ackroyd points out in his review for The Times, ‘Iain Sinclair has compiled what he calls an “anthology of absence”. There are stories of the outcast and the vagrant, the victims of an oppression that they themselves cannot define’ (7 October 2006). This collection includes work by authors such as Marina Warner, Michael Moorcock and J.G. Ballard.

In conclusion, Sinclair’s experiments and favouring of non-conformity have demonstrated over the decades that he has remained largely independent from mainstream popular opinion. This is exemplified in the self-publication of many of his earlier works (with his own Albion Village Press).  Further to this, his later output has not been restricted by conventional ideas of what constitutes ‘worthwhile’ subjects either, and he continues to walk where his interest takes him.