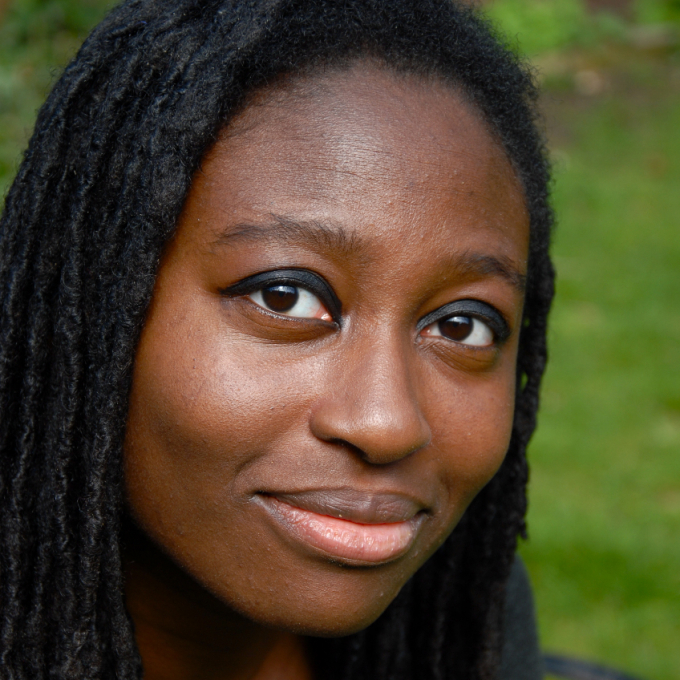 Helen Oyeyemi is the author of five novels, including White is for Witching, which won a 2010 Somerset Maugham Award, and Mr Fox, which won a 2012 Hurston/Wright Legacy Award.

In 2013, Oyeyemi was named one of Granta's Best Young British Novelists. Her story collection What Is Not Yours Is Not Yours was published in 2016.

Helen Oyeyemi has proved herself capable of translating precocious literary promise into a sustained career as purveyor of eerie and psychologically rich fiction.

Full of sinister doubles, dream worlds and confused identity, Oyeyemi’s novels have applied what one critic has called her “trademark magic realism” to a surprising range of settings and subjects. It is a versatility that has justifies her early acclaim, and in 2013 she was named as one of Granta magazine’s prestigious twenty ‘Best Young British Novelists’.

Thanks to the ferocious publicity blitz surrounding her debut, many readers are already well versed in the remarkable newspaper-friendly story of her early success. Born in 1984 in Nigeria, Oyeyemi moved aged grew up in south London, where she sought solace from a troubled childhood in fiction writing, finishing her first novel The Icarus Girl aged 18, and having it published to great acclaim while she was an undergraduate at Cambridge. As a result, she has had the unenviable task of growing up as a writer in public with her three further novels. Spreading her wings both stylistically and thematically, she has consolidated her fictional talent and matured into a serious contemporary figure.

That famous debut now makes sense in the context of her later books as having established her key techniques and themes. Twinned identities, cultural dislocation, narrative layers, typographical experimentation, and a beguiling authorial voice all feature in The Icarus Girl from the outset. The book focuses on Jessamy ‘Jess’ Harrison, the troubled and disruptive eight-year old child of an English father and Nigerian mother, whose vivid imagination leads her to prefer a life secluded from the world. The book opens in a closet with our hero refusing to leave: “Outside the cupboard, Jess felt as if she was in a place where everything moved past too fast, all colours, all people talking and wanting her to say things. So she kept her eyes on the ground, which pretty much stayed the same.” Much against her will she is made to visit her mother’s homeland (“On the plane she threw a tantrum. It was Nigeria. That was the problem. Nigeria felt ugly. Nye. Jeer. Reee. A … the leering idea of her mother’s country made her begin to struggle and thrash”), where she meets both an overbearing grandfather, and a mysterious spiritual twin called TillyTilly, who follows her back to London.

Using this device of the seemingly-imaginary double, and filtering it through Yoruba mythology, Oyeyemi offered a memorable depiction of cultural displacement, alienation and confusion. It was received as a remarkable achievement for such a young writer, hailed in the New York Times as “a masterly first novel” and praised for how it “brilliantly conjures up … the melding of cultures and the dreamtime of childhood, as well as the power of ancient lore to tint the everyday experience of a susceptible little girl’s seemingly protected life. (July 2005). The style was still seen as that of youth but highly appropriate to its narrator. Ali Smith in The Guardian noted that “Oyeyemi’s childish, almost embarrassingly open prose style, plus her narrative assurance, produces a peculiarly matter-of-fact kind of hysteria” (January 2005). To Patrick Ness in the Telegraph, however, there was still much work to be done on “a book where potential is more in evidence than execution and where interesting themes never quite overcome rough, awkward prose.” (January 2005).

Oyeyemi’s second novel The Opposite House took as its focus 19-year old Maja Carrera, a spiritual and inquisitive black Cuban singer living in Peckham with her white Jewish-Ghanaian doctor boyfriend Aaron. Realising that she is pregnant, Maja is ambivalent about telling Aaron, and about the implications of mixed race children. Whilst choreographing a cast of modern Londoners, Oyeyemi repeats the trick of debut by weaving in myths from Yoruba and its Cuban off-shoot Santeria. The most striking and unsettling thread involves the story of Aya, a Santeria goddess, who lives in a bizarre “somewherehouse” with one door leading to Lagos and another to London.

For the most part, these magical realist ingredients charmed reviewers on both sides of the Atlantic. The Washington Post celebrated confirmation of “a startling literary prodigy” who had “the ability to shift between realism and expressionism without surrendering to self-indulgence” and who recalled not just the recognisable tropes of multicultural London writing, but also “the visionary worlds of Emily Dickinson, Neruda and even Rimbaud.” (July 2007). Others were less clear that the elements relating to Santeria added much to the novel as a whole. In The Guardian, David Jays complained that the reader too often has “to settle down while Oyeyemi tells us yet another Santeria story and try not to fidget” (May 2007). The Telegraph concluded that “Most writers, especially young ones, need a good editor to calm them down. Oyeyemi's first book seemed strongly edited; the new one reads as if it had been nodded through” (May 2007).

White is for Witching (2009) was a notable development, marking an increasingly experimental narrative voice. In this novel Oyeyemi revisited her tropes of twins, and her idiosyncratic interest in psychic architecture, to the somewhat supernatural tale of two precocious twins, Eliot and Miranda, whose mother has been killed in Haiti whilst working as a photographer. The brief account of that death is notable in its eloquent restraint: “That day two bullets were for her; they found her and leapt into her lung. She fell amidst milling feet. Someone leant against her and pushed her aside, outside, out of life.” But the most notable aspect of the book is Oyeyemi’s capturing a polyphony of voices, including the two girls, a (suspiciously Oyeyemi-like) Cambridge undergraduate Ore, and in a bizarre twist, even the voice of a haunted ancestral home in Dover.

This novel also developed Oyeyemi’s techniques, in the direction of a new poetic and abstract form. The Guardian’s review complained of this new style that it was “written so elliptically that it can be hard to follow. It opens with four pages of poetic, disjointed writing that makes almost no sense until you have finished the book.” (June 2009). For those willing to persevere through these demanding elements and appreciate Oyeyemi’s remarkably lyrical handling of idiom, phrase and description were rewarding. Moreover, the foreboding and elusive nature of the style was once again closely fitted to the style. As the New York Times remarked of the novel, “although she may rely on some too familiar narrative ploys, Oyeyemi clearly appreciates that some crimes (like slavery or genocide or, in this case, institutional racism) are so heinous that the conventions of realist fiction seem woefully inadequate to describe them. She makes us glad to suspend disbelief.” (September 2009).

Her most recent book, Mr Fox (2010) was a playful novel awash with stories. In it, Oyeyemi took something of a radical shift in subject, presenting the story of American crime writer St. John Fox, who has a tendency to kill off his female characters. In a brisk and engaging opening section, Mr. Fox is taken to task for this misogyny by Mary Foxe, who chastises him: “What you’re doing is building a horrible kind of logic … its obscene to make such things reasonable.” The two begin with a hilarious epistolary exchange that results in their eventual meeting, after which they tentatively begin to collaborate on composing stories together, and Oyeyemi takes much pleasure in rendering and offering up the carnivalesque story-telling to-and-fro that develops between the two figures. Light-hearted and serious at the same time, this central meta-fictional conceit, with its concern with repairing and changing “grand narratives” is offset against miniature stories of villainy, and narrative frames that are often hard to detect, heading off in wildly unpredictable directions.

“In part” Oyeyemi has stated in an interview, Mr Fox “it's a story about the power of stories; Mary wants to broaden Mr Fox's perspective on love and his attitude towards the stories he tells, and part of that process is destabilising him and interfering with almost everything he's previously believed about the way a story goes. To that end, I had to find ways to tell each story as if it stood alone, as if it were a separate world that was unaware of the others that were connected to it.” (The Guardian, June 2012)

By the time the novel ends with a playful coda – “I almost forgot to mention another Fox I know of- a very wicked fox indeed. But you are tired of hearing about foxes now, so I won’t go on” – the reader has been thoroughly drenched in the power of tales. This narrative glee is a logical progression from the Angela Carter-like magic realist elements of her early novels, and a highly promising new direction. The New York Times might speak for many readers when it concedes that “It took a while to trust Oyeyemi’s intent” only to find that “once I did, I was in, fully… Oyeyemi casts her word-spell, sentence by sentence, story by story, and by the end, the oppressive lair has opened up into a shimmering landscape pulsing with life.” (October 2011).

Having made that difficult leap from promise to accomplishment look relatively easy, Oyeyemi has been lauded as one of Granta’s ‘Best Young Novelists’, and has proved herself capable of winning over readers with word-spells that continue to surprise and unsettle.