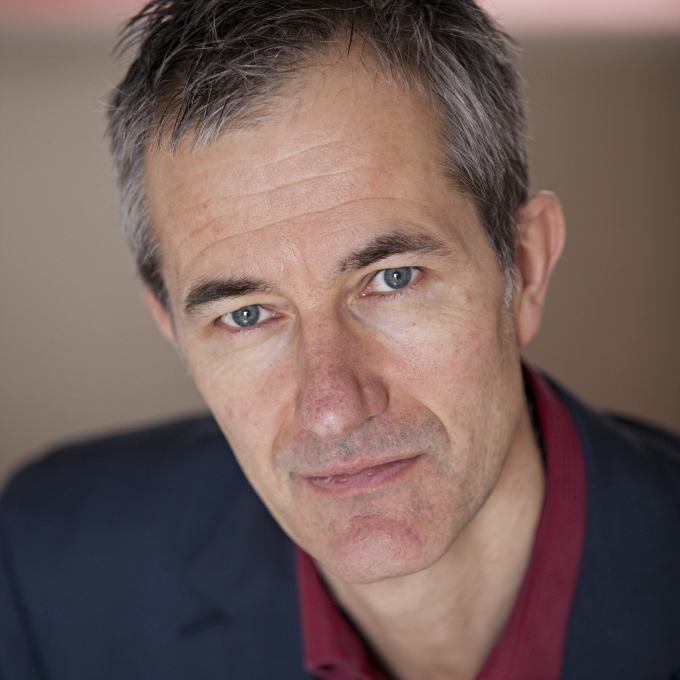 Geoff Dyer was born in Cheltenham, Gloucestershire, in 1958 and was educated at Corpus Christi College, Oxford. His first book, Ways of Telling: The Work of John Berger, was published in 1986. His first novel was The Colour of Memory (1989), set in Brixton, south London, in the 1980s.

His non-fiction includes a book about jazz entitled But Beautiful (1991), winner of a Somerset Maugham Award; The Missing of the Somme (1994), which was adapted for BBC Radio 3 and broadcast on the eve of the 80th anniversary of the battle of the Somme; a book about D. H. Lawrence entitled Out of Sheer Rage: In the Shadow of D. H. Lawrence (1997), which was shortlisted for the National Book Critics' Circle Fiction Award (USA); and three collections of essays, Anglo-English Attitudes: Essays, Reviews, Misadventures, 1984-99, published in 1999; Working the Room (2010) and Otherwise known as the human condition: selected essays and reviews 1989-2010 (2011).

He is also the author of four novels including The Search (1993), a complex narrative about a woman's search for her missing husband; Paris Trance (1998), chronicling the sex and drug-fuelled adventures of two couples living in Paris; and Jeff in Venice, Death in Varansi (2009), his fourth novel and winner of the 2009 Bollinger Everyman Wodehouse Prize.

Recent books are Yoga For People Who Can't Be Bothered To Do It (2003) and The Ongoing Moment (2005), an idiosyncratic history of photography. Zona, a book about Andrei Tarkovsky's film, Stalker, was published in 2012. Dyer's account of his experience as writer-in-residence on the USS George H W Bush, a military aircraft carrier, is described in Another great day at sea (2014).

In a world in which labelling, categorising and pigeon-holing are obsessive pursuits, not least because we deem that it is only by attaching a name to something that we are able to come to any understanding of it, Geoff Dyer is troublesome.

Although he has published three reasonably conventional novels, it is his seemingly loosely structured and free ranging non-fiction work that defies all attempts at description. His book about D.H. Lawrence, Out of Sheer Rage (1997); his meditation on memory, The Missing of the Somme (1994); his study of jazz, But Beautiful (1991); and his apology for traveller idleness, Yoga for People Who Can’t Be Bothered To Do It (2003); are, in their own way, memorable, highly original, and the product of a restless intelligence. And in the words of Dyer’s publishers, they are 'genre-defying' books. This is an apt enough phrase. Dyer is, like Alain de Botton, W.G. Sebald and (his hero) John Berger, a largely unclassifiable writer, who has established his reputation by the innovative conjoining of specific physical journeys with voyages into the realm of intellectual discovery.

Some critics have reacted to his work with nothing less than wonderment. Writing on Yoga for People Who Can’t Be Bothered to Do It, William Sutcliffe said, 'if Hunter S. Thompson, Roland Barthes, Paul Theroux and Sylvia Plath all went on holiday together in the same body, perhaps they could come up with something like this.' This is a revealing insight. Dyer, at his best, is a writer for whom anything seems possible. Capable of making observations that have one laughing out loud, he is equally adept at the dry, poignant aside. In Out of Sheer Rage he comments upon the discovery of D.H. Lawrence’s house in Sicily. 'We stood silently. I knew this moment well from previous literary pilgrimages: you look and look and try to summon up feelings which don’t exist. You try saying a mantra to yourself, "D.H. Lawrence lived here." You say, "I am standing in the place where he stood, seeing the things he saw …" but nothing changes, everything remains the same: a road, a house with sky above it and the sea glinting in the distance.”' He is also utterly compelling when sharing his enthusiasms or communicating his seemingly innate sense of place, and how it is made of the same fabric as culture, 'Opera begins in the market where, over and above the simple demands of competition, of being able to attract customers’ attention, stall holders have to convey the colour and taste of fruit in their voices.'

At the beginning of But Beautiful, Dyer writes that he is engaged in a process of 'imaginative criticism'. This seems the most apposite description of much of his work. This is where Dyer is most at home. In Out of Sheer Rage, there is a magnificently heartfelt tirade against the institution of literary criticism, which will be immediately relevant to anyone who has read English Literature at university. '[This] is the hallmark of academic criticism: it kills everything it touches. Walk around a university campus and there is an almost palpable smell of death about the place because hundreds of academics are busy killing everything they touch.' And later, 'spare me the drudgery of systematic examinations and give me the lightning flashes of those wild books in which there is no attempt to cover the ground thoroughly or reasonably.'  Of course this is also pure self-justification. Out of Sheer Rage is just such a book as Dyer celebrates. Setting out to writes a straight and sober study of D.H. Lawrence he managed instead to conjure up a laugh-out-loud, read-bits-out-to-your-friends book about his inability to write a straight and sober study of D.H.Lawrence. There has been no greater paean to the joys of procrastination. His failure to get down to actual work becomes a mildly farcical extended metaphor on the problems inherent in the act of creation: knowing where to start and how to organise, looking for a style and an approach. It had me longing to re-read Lawrence. And I’m not sure a more obviously academic piece of work would have achieved that.

Dyer’s novels, The Colour of Memory (1989), The Search (1993) and Paris Trance (1998), are engaging, thoughtful and enjoyable, but perhaps not as remarkable as his non-fiction. The most successful of the three is Paris Trance, a meditative tone poem which doesn’t so much as rework the Paris as ‘city of artists’ trope, as twist it to the author’s own needs. Yes we have the young exile in Paris there to work on his magnum opus, and yes he falls in love. But we also have him falling into a kind of joyous ennui, within which he cannot and doesn’t want to achieve anything. There is something of Satre’s Nausea about this novel, that undeniable mood of the unusual, the feeling of being lifted out of the ordinary everyday. This feeling of wilful estrangement from the daily pursuit of a specific end, of graft, of the Protestant work ethic, is something Dyer has dealt with elsewhere. Yoga for People Who Can’t Be Bothered to Do It is a series of essay-like tales on the whole notion of not only being away, but of doing very little except being away. Dyer is not a Lonely Planet traveller. He is, in many ways, not a traveller at all. He measures his interest in terms of foreign rhythms. If he feels he is somehow able to identify with the beat, then his enthusiasm is sparked. If not, then he is not going to go off on a sightseeing trip.

When fictionalising reality, tripping through his obsessions with boredom, breakdowns, drug use and the search for some kind of existential centre of stability, he is effortlessly witty and wise. His prose sparkles and shines with the force of its own brilliance. In But Beautiful, he describes saxophonist Lester Young’s sense of incongruity in the army: 'he liked long, tulip-stemmed phrases and in the army it was all short-back-and-sides shouts.' For Young, the army was a 'denial of melody.' What could be worse for a musician? Dyer is terse yet poetic, succinct yet memorably imaginative. But Beautiful takes one into the smoke-filled ice against glass tinkle world of through-the-night jazz bars, where, drug-fuelled and filled with an almost ethereal spirit of extemporaneity, some of the greatest musicians of all time worked their magic. But Beautiful is a gift to music, a sublime act of recreation, and the most unconventional textbook on jazz that has ever been written.

Dyer began his career with a critical study of his 'mentor',  John Berger. Like Berger he has revealed himself as a writer capable of addressing, with an occasionally breathtaking lucidity, a wide range of subjects. Dyer is at his best when expressing his admiration for something or someone that has taken his fancy. He is undoubtedly one of the most original writers in the language and I urge you to seek him out.