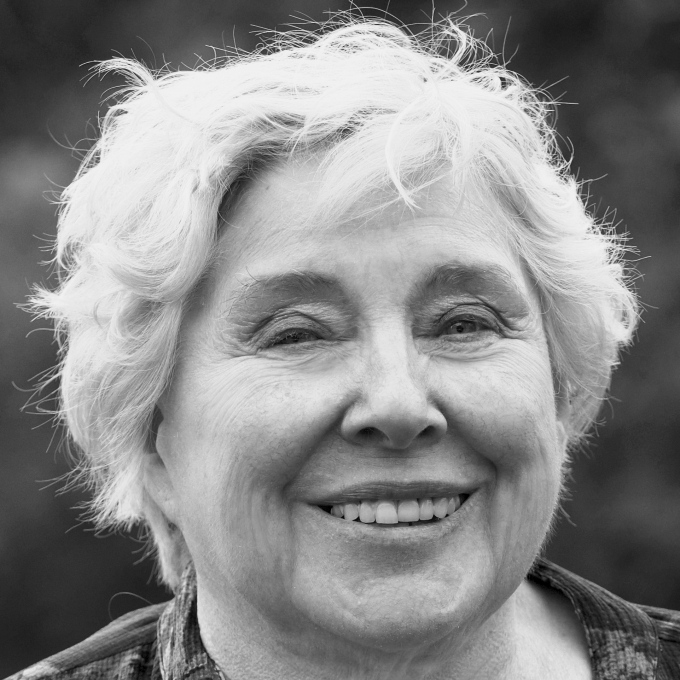 Novelist, playwright and screenwriter Fay Weldon was born on 22 September 1931.

She was brought up in New Zealand and returned to the United Kingdom when she was ten. She read Economics and Psychology at the University of St Andrews in Scotland, and worked briefly for the Foreign Office in London, then as a journalist, before beginning a successful career as an advertising copywriter. She gave up her career in advertising, and began to write full-time. Her first novel, The Fat Woman's Joke, was published in 1967. Fay Weldon is a former member of both the Arts Council literary panel and the film and video panel of Greater London Arts. She was Chair of the Judges for the Booker Prize for Fiction in 1983, and received an honorary doctorate from the University of St Andrews in 1990. She was awarded a CBE in 2001. Fay Weldon's work includes over twenty novels, five collections of short stories, several children's books, non-fiction books, magazine articles and a number of plays written for television, radio and the stage, including the pilot episode for the television series Upstairs Downstairs. Much of her fiction explores issues surrounding women's relationships with men, children, parents and each other, including the novels Down Among the Women (1971), Female Friends (1975), Praxis (1978) (shortlisted for the Booker Prize for Fiction), The Life and Loves of a She-Devil (1983), The Cloning of Joanna May (1989), and Wicked Women (1995), which won the PEN/Macmillan Silver Pen Award. Her 1997 novel Big Women was based on the events surrounding the creation of the feminist publishing house Virago. Other novels include Puffball (1980), The President's Child (1982), The Rules of Life (1987), The Hearts and Lives of Men (1987) and Rhode Island Blues (2000), the story of a young woman and her grandmother, an 83-year-old with a strong appetite for life. A new collection of short stories, Nothing to Wear and Nowhere to Hide, was published in September 2002. In her novel, Mantrapped (2004), the heroine wakes up to discover that she is a man.

Fay Weldon lives in London. Her memoir, Auto Da Fay, was published in 2002. Recent books are What Makes Women Happy (2006), a book of non-fiction; and The Spa Decameron (2007), about ten women who meet at a health spa and tell the stories of their lives.

Her most recent novels form the ‘Love and Inheritance’ trilogy, concerning the family and servants of the aristocratic Dilberne household, set around the turn of the twentieth century. They are: Habits of the House (2012), Long Live the King (2013) and The New Countess (2013). Mischief, a collection of short stories and a novella, was published in 2015.

She is Professor of Creative Writing at Bath Spa University.

Fay Weldon has been for several decades one of Britain’s most popular novelists. Prolific and indefatigable in chronicling the turbulent lives and loves of her characters (especially women), her books are characterised by their wittily barbed dialogue, satirical scenarios and dystopian visions.

Chalcot Crescent (2009), for instance, is set in a North London suburban house under siege by bailiffs at a time of economic collapse following ‘The Crunch’; there is a National Unity Government and the population survives on National Meat Loaf. Narrator Frances is an elderly formerly successful writer, meandering between memories and opinions on the disastrous state of the nation. She’s typically sardonic in describing her dysfunctional family, including her previous husbands, one of whom she long ago ‘stole’: ‘Karl seemed to like fat women. He should have stayed with my sister Fay’.

In her novels, women oppressed by their circumstances can take desperate measures. Most notoriously, in The Life and Loves of a She-Devil (1983), its protagonist undergoes a succession of cosmetic surgery operations in order to become the object of men’s sexual fantasies – but it’s equally a moral fable about re-inventing oneself. An early novel, Down Among the Women (1971) details across three generations women’s failed marriages, perilous finances and adulterous liaisons. Femaleness is a state ‘where the body is something mysterious in its workings, which swells, bleeds and bursts at random; where sex is an intermittent animal spasm; where men seduce, make pregnant, betray, desert’. The conflicting demands faced by women forms the basis of Praxis (1978), determining their roles as good mother, career woman and feminist. Weldon’s long-standing interest in psychology is epitomised in Splitting (1995), by a story in which the main character breaks into different personalities, from the wronged wife to the harlot.

Weldon has been criticised for her somewhat ambiguous relationship to the feminist movement, often seeming to challenge its principles and gender politics. Indeed, her novel Big Women (1997) satirises the goings-on at a feminist publishing house. Perhaps underlying this ambiguity is the ongoing debate in her writing about environment versus heredity in family life and relationships. In interviews, her memoir Auto da Fay (2002) or What Makes Women Happy (2006), Weldon tends to take the viewpoint of biological determinism, as in statements like ‘We are all still creatures of the cave’ or ‘Mother Nature is hopelessly old-fashioned’. Her early novels sometimes present women as responsible for their own predicaments. But later on her heroines are pragmatic or subversive manipulators of men and the masculine world order, whether that is represented by psychology (Freud looms large but is often subverted) or economics (career high-achievers or well-to-do women abound).

The foibles of the latter are sparklingly exposed in The Spa Decameron (2007), which brings together a diverse group of women at a luxury hotel over the festive season, to tell their life stories while being pampered. Their confessions are by turns salacious, comical or tragic, telling us about their men, sex, dysfunctional families, and money (Weldon’s trademark subjects), and are full of narrative twists and surprises. We as readers listen in eagerly to The Trophy Wife’s tale of marital revenge, The Judge’s transsexuality, and especially The Brain Surgeon’s lustful story of blonde twin sisters ‘Shimmer’ and ‘Sparkle’. That these women are deliberately portrayed as types seems besides the point, when the author’s purpose is entertainment.

The Stepmother’s Diary (2008) is a multi-generational tale of irregular family and sexual relationships. Adultery forms a consistent subject in Weldon’s books and always has consequences, in marriage break-ups and the revelation of unexpected paternity. Kehua! (2009) has these ingredients, as well as another familiar feature: the author addressing the reader. The title refers to Maori spirits, who attend an elderly author of New Zealand origins, as Beverley types her latest book. Along the way she tells we readers about the sometimes arbitrary nature of the writing process (‘The “one simple murder”, by the way, was spur of the moment, but I’ll try and make it work’). Beverley has to deal with her own past, her daughters’ complicated affairs as well as try to advise wayward grand-daughter Lola.

In 1971 Fay Weldon wrote the pilot episode of the highly successful television series Upstairs, Downstairs. She returns to the setting of the Edwardian aristocratic household for her new ‘Love and Inheritance’ trilogy. As Habits of the House (2012) opens, Lord Dilberne and his family are about to receive unwelcome news from financial adviser Baum about the ruin of their gold mine investments during the Boer War. As a gambler and politician Dilberne is already under financial pressure; he and his wife have to contemplate the marriage of their rake son Arthur to a socially unsuitable American heiress ‘of the stockyards’. Worse, their unmarried daughter Rosina proclaims herself a New Woman and Fabian socialist.

The servants, led by lady’s maid Grace, gossip and manipulate things behind the scenes. Meanwhile, they all have to prepare for a charity dinner at which the guest of honour is Dilberne’s friend the Prince of Wales. All this provides a rich tableau for Weldon’s comic skills, as the family’s financial and social embarrassment is threatened. The saga continues entertainingly into the new reign with Long Live the King (2013) and The New Countess (2013). It is of course not that far removed from the world of Downton Abbey. Fay Weldon proves once again that she is a master of popular (and topical) fiction.

'Well, there's no time to waste. Life's short, the world's history is long and its societies diverse. If I am a prolific writer and turn my hand, with what seems to some as indecent haste, from novels to screenplays to stage and radio plays, it is because there is so much to be said, so few of us to say it, and time runs out. Readers crave explanations of their lives: the writers of fiction provide it, enlarging experience, giving meaning and significance where none was before. I see myself as someone who drops tiny crumbs of nourishment, in the form of comment and conversation, into the black enormous maw of the world's discontent. I will never fill it up or shut it up; but it seems my duty, not to mention my pleasure, to attempt to do so, however ineptly. See me as Sisyphus, but having a good time.'

@FayWeldonWriter RT @EarlyBirdBooks: If you're looking for assurance that you're not the only one with a less-than-perfect family, turn to authors like @Fay…
(2 years ago)

@FayWeldonWriter RT @VoicecallOnline: Worst Fears A classic tale of how a perfectly knitted life can unravel in the space of days. 📝Written by @FayWeldonWri…
(2 years ago)