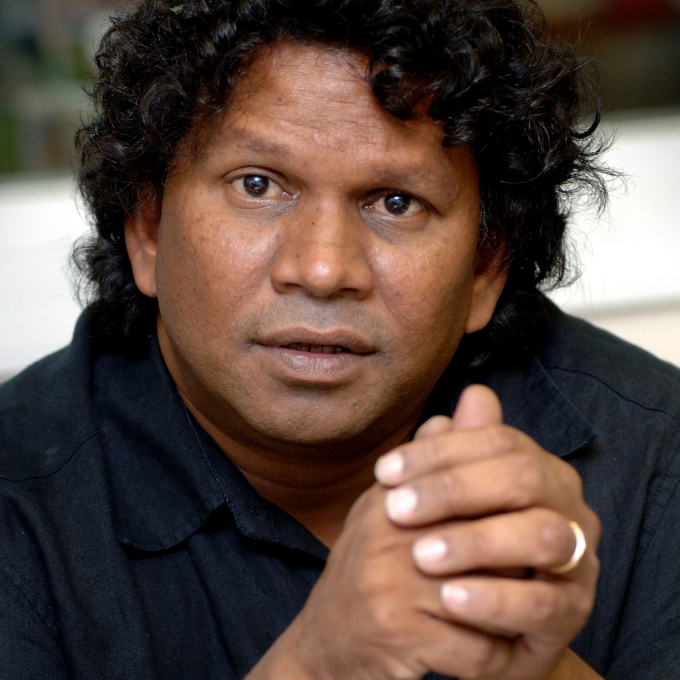 Critic, writer and novelist David Dabydeen was born in 1955 in Berbice, Guyana, moving to England with his parents in 1969.

He read English at Cambridge University, gained a doctorate at University College London in 1982, and was awarded a research fellowship at Wolfson College, Oxford. David Dabydeen is Director of the Centre for Caribbean Studies and Professor at the Centre for British Comparative Cultural Studies at the University of Warwick. He is also Guyana's Ambassador-at-Large and a member of UNESCO's Executive Board. In 2001 he wrote and presented The Forgotten Colony, a BBC Radio 4 programme exploring the history of Guyana. He is the author of four novels, three collections of poetry and several works of non-fiction and criticism. His first book, Slave Song (1984), a collection of poetry, won the Commonwealth Poetry Prize and the Quiller-Couch Prize. A new collection, Turner, was published in 2002.

His first novel, The Intended (1991), the story of a young Asian student abandoned in London by his father, won the Guyana Prize for Literature. Disappearance (1993) centres on a young Guyanese engineer working on the south coast of England who lodges with an elderly woman. The Counting House (1996) is set at the end of the nineteenth century and narrates the experiences of an Indian couple whose hopes of a new life in colonial Guyana end in tragedy. The story explores historical tensions between indentured Indian workers and Guyanese of African descent. A Harlot's Progress (1999), is based on a series of pictures painted by William Hogarth in 1732 and develops the story of Hogarth's black slave boy. Through the character of Mungo, Dabydeen challenges traditional cultural representations of the slave.

David Dabydeen's latest book is Molly and the Muslim Stick (2008) and he has recently edited books for the Coventry-based Heaventree Press. In 2007, he was awarded the Hind Rattan (Jewel of India) Award for his outstanding contribution to literature and the intellectual life of the Indian diaspora.

Like the crumbling cliff faces of David Dabydeen's Disappearance (1993), the black presence in Britain has been subject to an historical process of erosion.

In wave after wave of writings, from the scholarly anthology Black Writers in Britain, 1760-1890 (1991), to poetry collections like Coolie Odyssey (1988) and novels such as The Intended (1991), Dabydeen has worked to imaginatively return this presence to Britain's shores.

Dabydeen established his reputation as a creative writer with his early, award-winning books of poetry Slave Song (1984), Coolie Odyssey and Turner: New and Selected Poems (1994). The overall impression that remains with the reader of these critically acclaimed collections is of a series of diverse, discontinuous journeys; voyages by slave ship, by plane, train and taxi; personal odysseys; transatlantic crossings; a bus trip to Shepherd's Bush. Travelling back and forth across history, Dabydeen evokes the Caribbean experience as a Diaspora experience, a movement between India and Guyana, Guyana and England. For example, 'London Taxi Driver' takes us on a trip from Tooting to Waterloo that contains within it a larger trip: that of an indentured Indian labourer from Berbice to London. Whether within the 'broken' Creole of the coolie or the curses of the cockney cab driver, Dabydeen's poetry manages to vividly capture the casual brutality and sexual violence that was / is part and parcel of the colonial encounter.

More recently, Dabydeen's accomplished long poem Turner (2002), confirms his reputation as a poet. The work is a lyrical and moving response to J. M.W. Turner's famous painting, 'Slave Ship', depicting African Slaves being chained and thrown overboard. Dabydeen dwells on the submerged body of a drowned slave in the foreground of the painting, blending fantasy and history in order to salvage and redeem his past.

In 1991 Dabydeen published his first novel, The Intended. In spite of the switch in genre (poetry to prose) and subject matter (the novel is set in contemporary London) there are clear correspondences with his earlier work. In particular, Dabydeen's early preoccupation with the horrors of slavery and colonisation are flagged up in the novel's title, which is an allusion to Kurtz's Intended in Conrad's Heart of Darkness. The Intended successfully combines unsettling Conradian prose with a humorous, semi-autobiographical account of growing up in London.

Disappearance, his next novel, is written in an economical, uncluttered prose that tells the story of a young Guyanan engineer's struggle to save a coastal village in Hastings. Set precariously on the edge of a crumbling cliff, his job is to create a sea defence capable of preserving this precious setting during his allotted six-month stay. Meanwhile Mrs Rutherford, his ageing widow of a landlady, assumes the role of his guide, exposing him to the strange rituals of village England and its ghostly imperial past.

This is a deeply symbolic landscape in which the narrator feels acutely strange. Walking along the beach he says 'I felt like some prehistoric bone in the Hastings Museum which had suddenly stirred in its glass cabinet'. And yet his presence here is somehow appropriate. The transient, shifting shoreline on which he finds himself working, an unstable stretch of sand between land and sea, provides an emblematic backdrop for a staging of the migrant condition. (The same beach, incidentally, on which Salman Rushdie's infamous protagonists land in The Satanic Verses).

Disappearance's narrator haunts the very foundations of Hastings, with its 1066 and droves of European invaders. His advances in this setting are plotted against the retreat of the coastline, 'collapsing as the Empire had crumbled'. But the villagers aren't going to give up that easily. Coming together to form a Committee for the Defence of Dunsmere, and spurred on by none less than the Queen Mother, they make a spirited struggle to preserve their homes, their history. It is in this context that the engineer's sea defence, stretching for half a mile along the shore, becomes an ambivalent marker of a black presence and heritage. 'You've carved your name in history', Mrs Rutherford says to him, even as the wall gradually begins to erode and disappear.

Dabydeen's works of fiction, The Counting House (1996), A Harlot's Progress (1999), and Our Lady of Demerara (2004) are typical of his ability to combine academic and artistic careers. In very different ways both novels draw on the author's impressive scholarly knowledge of colonialism and slavery, a knowledge already amply demonstrated in influential academic texts such as The Black Presence in English Literature (1985) and Hogarth's Blacks (1985). After the pared down narrative of Disappearance, the sheer textual indulgence and playful linguistic excess of A Harlot's Progress come as something of a surprise. Set in the 1700s, the story is framed by Mungo, the oldest black man in London, and Mr Pringle of the Abolition Committee. Mr Pringle urges Mungo to tell him the story of his life as a slave in exchange for charity. Here Dabydeen knowingly recreates the conditions of the earliest black British slave narratives, themselves oral accounts recorded by white amanuenses. However, this is certainly not history with a capital 'H'. Despite Mungo's recollections of Africa, of life on board Captain Thistlewood's slave ship, and finally of 18th-century London, his oral tales ultimately refuse to be structured within the scribal culture represented by Mr Pringle's pen. Much of the energy and momentum of A Harlot's Progress derive from its intertext: William Hogarth's popular print of 1732. In a classic postcolonial act of revision and reinvention, Dabydeen steals Hogarth's black slave boy and allocates him the role of central protagonist. In A Harlot's Progress, Mungo is a chronically unreliable narrator, 'a ruined archive'. Mr Pringle on the other hand, who uses artistic license in the face of Mungo's stubborn silence, is no better. This is a yarn that plays mischievously with its readers. The result is a spellbinding, if unsettling blend of tragedy and of laughter.

His most recent novel, Our Lady of Demerera (2004) opens in Coventry (where Dabydeen lives and works) in the late twentieth century. The plot revolves around Lance, a theatre critic seduced by the possibility of seedy sexual encounters in the backstreets of the city. Abandoned by his working-class parents, Lance is briefly married to Beth before heading to Guyana (where Beth’s grandparents owned a sugar estate). The book combines realist and magical realist elements and it is no coincidence that the book is dedicated to fellow Guyanese novelist, Wilson Harris (and St Lucian poet Derek Walcott) who is comically reinvented through the text as Father Wilson and Father Harris. If, as the critic Sukdev Sandhu has noted, Our Lady of Demerara is a novel about destitution and degradation, it treats its subject with a typically subversive wit: 'Not for Dabydeen the hand-wringing dolours and communal uplift of a certain strain of postcolonial literature. He prefers intellectual bawdy.'

In 2007, David Dabydeen co-edited the monumental Oxford Companion to Black British History. Described in The Independent newspaper as 'a magisterial excavation of black Britain', the volume contains over 400 entries by more than 100 specialist contributors.

2008
Molly and the Muslim Stick
2008
The First Crossing: Being the Diary of Theophilus Richmond, Ship's Surgeon Aboard The Hesperus, 1837-8
2007
The Oxford Companion to Black British History
2007
Selected Poems of Egbert Martin
2007
Broadcast 2: Picture Thinking and Other Stories
2005
Slave Song
2004
Our Lady of Demerera
2002
Turner
2000
No Island is an Island: Selected Speeches of Sir Shridath Ramphal
1999
A Harlot's Progress
1996
The Counting House
1996
Across the Dark Waters: Ethnicity and Indian Identity in the Caribbean
1994
Turner: New and Selected Poems
1993
Disappearance
1991
The Intended
1991
Black Writers in Britain 1760-1890
1988
Handbook for Teaching Caribbean Literature
1988
Coolie Odyssey
1987
Hogarth's Blacks: Images of Blacks in 18th-Century English Art
1987
A Reader's Guide to West Indian and Black British Literature
1987
India in the Caribbean
1985
The Black Presence in English Literature
1985
Caribbean Literature: A Teacher's Handbook
1984
Slave Song