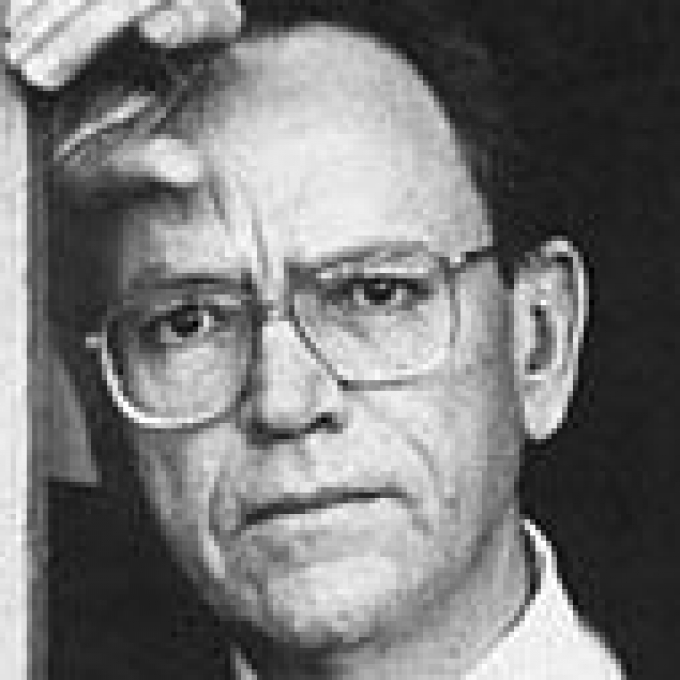 Novelist Christopher Hope was born in Johannesburg, South Africa in 1944. He was educated at the universities of Witwatersrand and Natal and worked as a journalist before moving to London in 1975. He is a regular broadcaster and contributes articles and reviews to newspapers, magazines and journals. He has also written plays for both radio and television.

His poems were first published in Whitewashes (1971), but Hope's first significant publication was Cape Drives (1974), which won the Thomas Pringle Prize and a Cholmondeley Award. His published poetry also includes In the Country of the Black Pig (1981) and Englishmen (1985).

His first novel, A Separate Development (1981), was banned in South Africa. A rich, comic satire of the apartheid system, it won the David Higham Prize for Fiction. His other novels include Kruger's Alp (1984), which won the Whitbread Novel Award; The Hottentot Room (1986), set in a London drinking club, a home from home for South African exiles; and My Chocolate Redeemer (1989), the story of an unlikely friendship between a 15-year-old girl and an exiled dictator. More recent novels include Serenity House (1992), a black comedy set in an old people's home in London, shortlisted for the Booker Prize for Fiction; Darkest England (1996), which subverts the colonial experience through African explorers visiting England; and Me, the Moon and Elvis Presley (1997), a satire set in the new South Africa. His most recent novels are The Garden of Bad Dreams (2008) and Shooting Angels (2011).

Hope's non-fiction includes a volume of autobiography, White Boy Running (1988), a travel book, Moscow! Moscow! (1990), which won a PEN Award, and, most recently, Signs of the Heart: Love and Death in Languedoc (1999), about his home in the South of France.  Brothers Under the Skin: Travels in Tyranny (2003), is a biography of the Zimbabwean dictator Robert Mugabe.

Christopher Hope was born in Johannesburg, South Africa in 1944.

Although he left South Africa, initially for the UK, in the 1970s, he has remained a commentator on events there, and the country and its changing politics continue to inform his extensive journalism and his fiction. Both in his journalistic essays and in his novels he is a witty and sophisticated critic of the pretensions and paranoia of authoritarian regimes, and with a certain darkly satirical humour he depicts the absurdities that are so frequently entangled with the horrors of repression. Hope gives matter of fact accounts of the grimly farcical world of the apartheid regime in South Africa, and of the uncertainties of the present situation there. In his accounts, the facts of an authoritarian regime and its after effects acquire an air of unreality that recalls the looking-glass world of Lewis Carroll. The skewed vision promoted by censorship and propaganda becomes ever more fantastic as rumours and conspiracy theories take the place of alternative perspectives.

In some of his later works, Hope brings his South African experience to bear on other situations both actual and fictional. He writes about post Cold War Russia in Moscow! Moscow! (1990), about the United Kingdom in Darkest England (1996), and about Languedoc in Signs of the Heart (1999). The strategies Hope employs for purposes of contemporary satire have more than once been compared to those of Jonathan Swift. His sardonic humour enables him to make accurate and unsettling observations on forms of madness, which in everyday life many people accept without question.

In his fictional accounts of South Africa Hope describes the combination of fact, myth and paranoia which an authoritarian regime often employs in justification of its oppressive authority. In the pseudo-allegorical fable Kruger's Alp (1984) Theodore Blanchaille, a renegade Catholic priest, sets off on a grim yet ludicrous quest for the legendary gold of President Kruger. Blanchaille's journey comes to represent the absurdity not only of the personality cult but also of other quasi-mystical ideologies. The narrative offers large parallels with the Divine Comedy and Don Quixote, but is more awkwardly and explicitly identified as an inverted and distorted imitation of The Pilgrim's Progress. This extravagant strategy contributes to the unreal and at times nightmarish atmosphere of the novel, but the reality Blanchaille ultimately finds at Kruger's Alp is more sinister and more incredible than any of the book's acknowledged fantasies.

Me, the Moon and Elvis Presley (1997) presents, in a series of snapshots from the years 1949 to 1995, parallel accounts of life in a small Karoo village after the triumph of the National Party under Malan and after the later events which the inhabitants of the village known as 'the Change'. These contrasting yet analogous phases of South African history are interpreted through the lives of an eclectic mix of personalities. A group of British Israelites claim descent from Abraham through the 'Queen of England'. A lawyer turned travelling salesman wears a white suit that takes on different semiotic associations in different parts of the novel. A young woman named Mimi is purchased on her first arrival for six bars of soap, but later re-appears under a new name to become Deputy Mayor. The eccentricity of these human characters is surpassed by that of a highly vocal and politically incorrect budgie. The 1990s in this book become a distorted mirror image of the 1950s. The arrival in 1956 of the 'trembling pelvis' of Elvis Presley is ascribed to the 'Commies', the Jews, and the Roman Catholic Church. It is even interpreted as an English plot to avenge the electoral defeat of 1948. In 1995 the village hold a karaoke homage to Elvis in which the Israelites' performance of a hymn to Yahweh is followed by an affirmative action Presley, a Gay Pride Presley and a choral Elvis from the a cappella group.

Hope is an acute observer of the follies and idiosyncrasies of other nations too. In Darkest England he describes a journey undertaken by the fictional San explorer David Mungo Booi on behalf of the Society for Promoting the Discovery of the Interior of England. The text of this book is offered as Booi's notebooks, and its style parodies the phlegmatic and naively inquisitive manner of nineteenth century English explorers in Africa. Booi aims to find answers to fundamental questions about self-defining English myths: 'Did they really build Jerusalem in their green and pleasant land?', 'Why do they believe there will always be an England?'. Hope exploits the unusual viewpoint of his narrator to give plausibility to extravagant inventions and to satirise British systems and ideologies. He not only ridicules such institutions as Parliament, the mental hospitals and the gaols, but also undercuts the unquestioning confidence of the 'right-thinking' classes in their own earnestness.

Hope has an eye for the bizarre within the everyday in other situations also. It is not only in Britain that the surreal provides a paradoxically sane and stable presence. In Hope's accounts of his visits to Yugoslavia a large pink man with a weighing machine on the main pedestrian street of Belgrade is a constant and strangely reassuring presence through the years of nationalism and the disintegration of the country (The Guardian, June 6 2001). In Signs of the Heart, a travelogue set in Languedoc, the narrator encounters such eccentric figures as Armand the hunchback who keeps a hoard of 5000 glass chimneys, and Sophie who is taking a correspondence course in 'Things a Deity must do if She is to do Her job'.

The re-naming of towns, cities and streets has been standard practice in the re-creation of a number of countries and political systems. The imaginary Karoo village of Me, the Moon and Elvis Presley changes back and forth between Buckingham and Lutherburg depending on the political climate. Similarly in White Boy Running (1988), a factual chronicle of Hope's return to South Africa for the elections of 1987, we learn that McHattiesburg became Balfour after the South African War. Hope has a sharp eye for such alterations in signs and symbols. Colours, flags and graffiti are all invested with ironic significance. The slogans of South African elections range from 'Gay Whales against Apartheid' in 1987, to 'One Settler, One Prozac' in the 'new' South Africa. In Kosovo in the former Yugoslavia the Grand Hotel of Pristina loses the last two letters of its name, becoming the Grand Hot. As Hope points out, neither of these adjectives is justified.

Christopher Hope is a skilful creator of imaginative satire. His shrewd and often polemical writing compels his readers to look again at the shifting significance of the slightest detail. In both his fiction and his journalism Hope offers insights into the cruel absurdities of political oppression. In his caustic commentaries he underlines the importance of being able not only to criticise but also to puncture the pomposity of humourless systems and beliefs. Like many writers of South African origin, Hope brings his critical and imaginative powers to bear on major religious, political and cultural issues. His choice of subject matter affirms his belief that writers have an important role in public life; but the extravagances of his comic and satiric invention suggest that such a belief is often difficult to sustain.

'Writing has always seemed to me to be a rather mischievous occupation. I write not to change the world but to undermine it, since the models on offer seem pretty dull most of the time. Much of life is odd and disorganised. Many people who pretend at being certain about things are either ingenuous or wicked. They are also often charlatans. One wants to record their utterances, wherever possible, as a warning to others. As a writer I was lucky enough to grow up in South Africa, a place where the lethal folly of what everyone assured me was "normal" life far outstripped even the most audacious of writers. It made for a wonderful training. It taught me about the sheer inventiveness of life. And it gave me a subject - the triumph of power and the terminal comedy of those who wield it.'