Writing on the Wall: Mourid Barghouti

Following the recent passing of Palestine poet Mourid Barghouti, Writing on the Wall share the impact and significance of his work to them as an organisation. 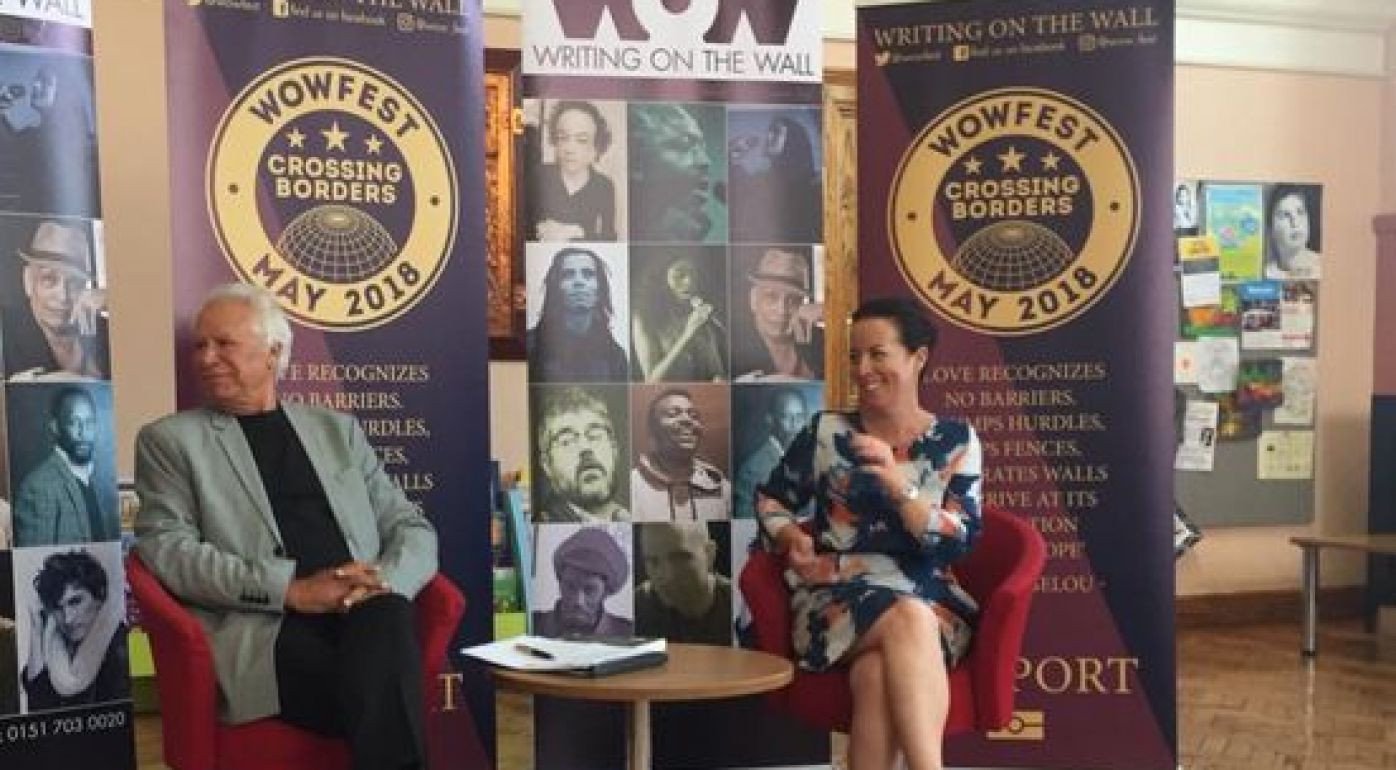 Writing on the Wall were deeply saddened to hear about the passing of Palestinian poet Mourid Barghouti. In May 2018, Writing on the Wall had the pleasure of welcoming Mourid to Liverpool for a series of events as part of our WoWFest18: Crossing Borders Festival. We had wanted to welcome Mourid to our festival programme for some time – his dazzling and deeply moving poetry and writing about his often-complicated relationship to home and belonging had long spoken to the work we do at WoW supporting and promoting underrepresented communities. Speaking from a place of exile, displacement and searching, Mourid’s work encapsulated so many experiences of those unwelcome, uninvited, or forcibly removed from the places they belong, whether that be a physical or psychological space, and that is at the core of what we do at WoW.

We welcomed Mourid for a week to the city, his visit was generously supported by the British Council; this was a genuine once-in-a-life time chance for the city to host this important and magnanimous artist. Mourid was a delight to communicate with, he was excited and generous in his time, as we stocked up on quality coffee, sim-cards and an itinerary of things for him to do in his spare time in the city. He arrived without fanfare at our office in Toxteth library as we were setting up for a community event he had agreed to do with young writers, community workers, and fellow Palestinians delivered in partnership with Liverpool Arabic Arts Festival; a rare and memorable experience for all who took part. He asked for a chair so he could sit in the sunshine and enjoy a break before the event began. I admit I was nervous to speak to him, his reputation preceded him and I felt personally responsible for his enjoyment during his time in Liverpool. The nerves quickly subsided as we spoke, he would crack the odd joke, demonstrating the joyful and vibrant person he was.

As part of our festival, we held an In Conversation in the beautiful Bluecoat building, chaired by Marcello Di Cintio who was touring his most recent book, Pay No Heed To the Rockets: Palestine in the Present Tense. The event felt like a meeting of minds. Mourid and his work have this inescapable field of orbit around him, not only because of its importance but of his charisma and charm when speaking about the difficult experiences detailed in his work. As he gracefully replied to audience questions, Mourid made it clear that he did not want to be an oracle for political solutions, he was there to talk with us, not to us, to host a conversation, person to person.

I distinctly remember how Mourid spoke about what he called verbicide; the removal of a word from language; a language from a tongue and how from his experiences of exile he was being robbed of the language he used to define himself. Since Mourid’s visit to Writing on the Wall, we have seen communities resurrect aspects of language that have been taken from them through, for example, the Black Lives Matter and Climate Justice movements. I continue to think of those who may be working to resuscitate language for themselves; those experiencing lockdown with their abusers, those seeking asylum or refuge during a pandemic, or those who are enduring grief, isolation and hardship.

Mourid’s legacy will continue to roll out before us, guiding us towards a sense of belonging, of having a voice and the words with which to define, or perhaps more importantly redefine, ourselves. We are immensely grateful to have had the opportunity to work with him, send his family our deepest condolences and urge you to do that most powerful of things and remember him and his work – the lessons he gave us in his writing can, and will, continue to help us navigate the arduous future that lies ahead of us all.

Find out more about the Writing on the Wall Festival

@wowfest #WoWFEST21 is out and about! Our festival posters are up and around Liverpool, can you spot them all? See our FUL… https://t.co/DLy1K5BDSn
(7 hours ago)

@wowfest We are looking for 8 Commissions with #LiverpoolWriters each worth £1000 or £2000. How can you encourage Children &… https://t.co/Ql6UJivVBU
(9 hours ago)

@wowfest Did you hear? We've extended our £21 FESTIVAL PASS deal until 25th April to give you the chance to see ALL of… https://t.co/Yzk24OKjOx
(10 hours ago)

@wowfest Spaces are still available for @_OpenCulture The Play Writing Lab today at 7pm, so hurry and don't miss the chance… https://t.co/2gtKw45qMT
(12 hours ago)