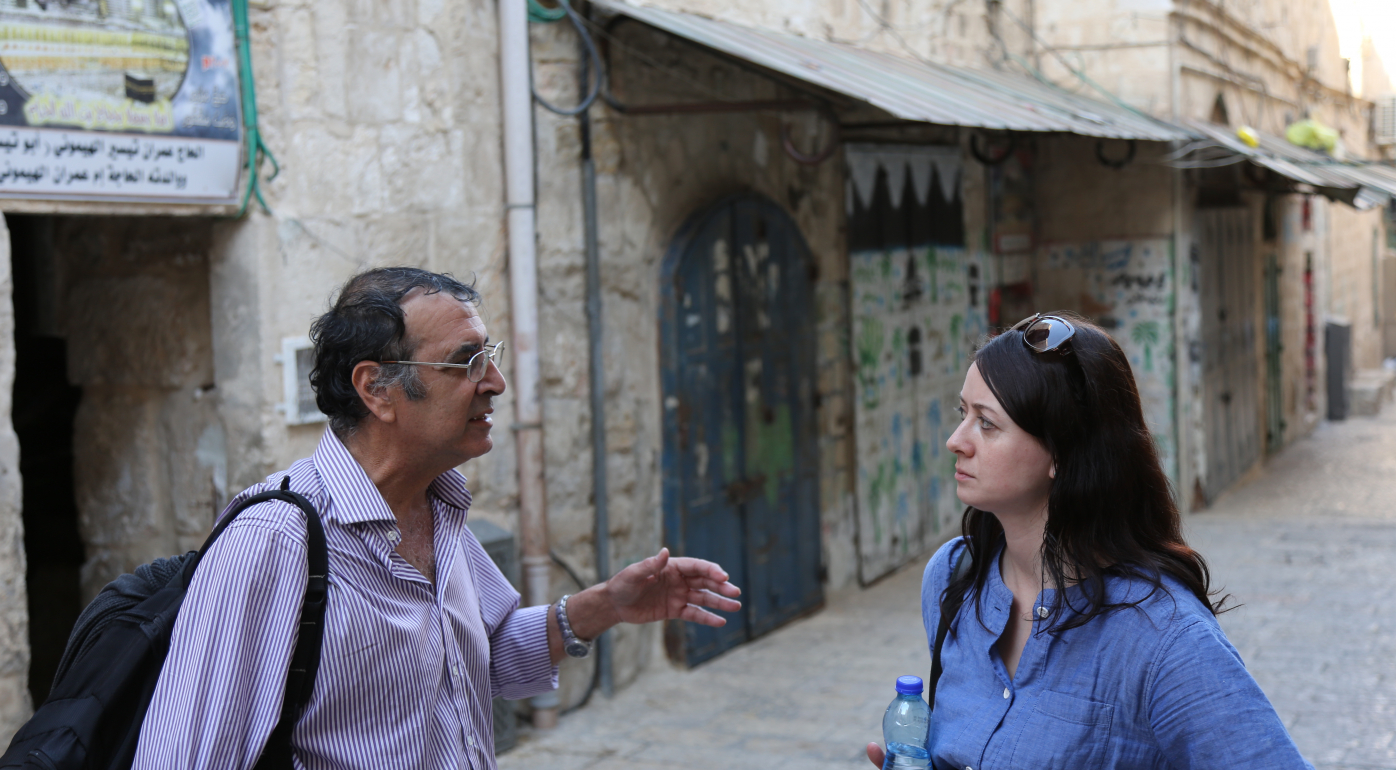 The first night of the Kalimat Palestinian Literature festival, in Jerusalem’s Palestinian Heritage Museum, was a sombre affair. On her way to the festival, headlining Palestinian-American writer, Susan Abulhawa, was detained by Israeli border guards and deported back to the US. Susan addressed the assembled audience via Skype instead.

Susan’s talk was followed by a moving reading by Nasab Adeeb Hussein of her poem ‘Apology to the Peoples of the World’. University of London Professor Nur Masalha said: “This is about Palestinians speaking for themselves. We need to insist on this. This is what this book is about and I hope the festival will be about too”. Also on the panel, writer Fida Jiryis talked about her own family’s history under the theme of ‘Narratives and Nations’ and Polish author and feminist Sylwia Chutnik read from her own work on the ghosts of the Warsaw ghetto.

The searching, emotional tone of the five day festival had been set. The organisers, from Jerusalem’s Educational Bookshop and the Council fro British Research in the Levant's Kenyon Institute condemned the actions of the Israeli border force in denying entry to Susan Abulhawa, whose family roots in Palestine date back to the first century AD. She described her 32 hour detention in Ben Gurion airport, saying that she wrote on the wall of her cell: “Susan Abulhawa was here and smuggled in this pencil” and “Israel is an apartheid state.” While detained, she read Professor Masalha’s new book ‘Palestine: A Four Thousand Year History (University of Chicago Press 2018)’.

We travelled from Jerusalem to Nablus, Ramallah, Bethlehem and Haifa. A theme of resistance, and the struggle to resist, prevailed. The Palestinian writers shared their personal stories of the Nakba, when more than 700,000 Palestinians were expelled or fled their homes. Canadian author and journalist Marcello Di Cintio read from his poetic book about literary culture in Palestine ‘Pay No Heed to the Rockets: Palestine in the Present Tense’ (Saqi books 2018) - its title referencing a line by Palestinian poet Mahmoud Darwish as he described making coffee during an Israeli attack. In Ramallah, we listened to author Salim Tamari explore Palestine’s Ottoman history and then personal, familial reflections from poet Asmaa Azaizeh.

Throughout the trip, the architecture of occupation – physical or emotional - never left us. In Nablus, we visited An-Najah University and wandered around the winding streets of the old town, joined by Novelist, Poet and Palestine Writing Workshop Director Maya Abu Al Hayyat. We drank small cups of Arabic coffee in Sheikh Qassem’s coffee house under the shade of a grape arbour. 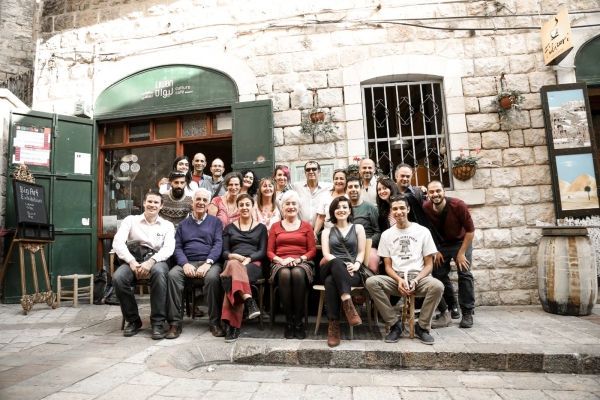 Writers and organisers at the Kalimat Festival

That evening we heard from Ramallah based poet Suad Amiry who described the personal and political meaning of the theme ‘Breaking Boundaries’. Scottish physician and author Gavin Francis spoke about the borders he encountered during an around the world journey with his future wife. Two nights later in Bethlehem, Gavin read from his brilliant book ‘Adventures in Human Being’ (Wellcome Collection 2015).

In Bethlehem, we were shown around Aida refugee camp. The camp abuts the wall and its watchtowers. We examined murals depicting the struggles of its long term residents. Palestinian author and lawyer Raja Shehadeh was supposed to speak in Bethlehem but couldn’t make it because of blockages at the Israeli checkpoint outside Ramallah. In Haifa, Raja managed to join us and read from his book ‘A Rift In Time: Travels With My Ottoman Uncle’ (Profile books 2010). Galilee born author Ala Hlehel shared passages from his Arabic language novel ‘Au Revoir Acre’ (2014) and I read from my book ‘With Ash on Their Faces: Yezidi Women and the Islamic State’ (OR books 2017). 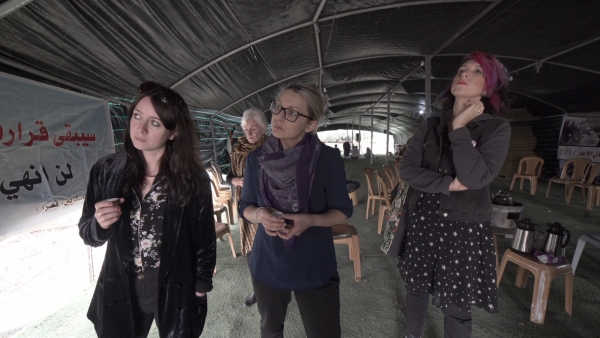 Back in Jerusalem, I delivered a writing workshop for Palestinian students at Al Quds University. We talked about how to begin a story, blog or article to catch the attention of the reader. I asked the students to write the first lines of their autobiographies. The results were revealing and profound. A young man sitting at the back of the class wrote: “Nothing among which I’ve chosen in my life has been optional.” One quiet female student chose to write: “And there it is. Not just a prison. A prison would be a fact. But this prison is a philosophy.”

For me, the Kalimat festival emphasized the struggle and necessity of continuing to speak out under systems of oppression, and the challenges of doing so. In my book, I wrote about the ways that generations of Yezidi women told each other stories of resisting captivity and killings under Ottoman rule. The acts of resistance contained in the stories, such as putting ash on their faces to ward off attackers, were then practiced by women imprisoned by ISIS. The stories alone didn't allow the captured Yezidi women to escape, but the acts of resistance were assertions of dignity and humanity amid the dehumanizing experience of captivity. Of course, we cannot compare the two situations. But the book festival again showed me the importance of expressing cultural identity as a means of continuing the radical act of hope.

The Educational Bookshop and the Kenyon Institute organised the festival to assert a space for Palestinian cultural identity as a means of creating dignity and hope. Mahmoud Muna from the Educational Bookshop told a journalist from Gulf News: "Writing in all forms — poetry, fiction, non-fiction and journalism — facilitates experiential reflection, the documentation and defence of historical narrative, and helps build community and resilience. It is a tool to communicate to audiences beyond our own immediate surroundings, and is a basic means of human expression by which it becomes possible to appeal to commonalities in the human condition. The use of this tool is all the more important for those caught in situations of injustice, and for those who are prevented free exchanges of movement and access."