When the invitation arrived from the British Council to take part in the Walking Cities project with Dionne Brand, I felt the way that writers are supposed to feel in front of a blank page: what to do with the potential of this vast, somewhat terrifying, and delightful space? The brief was simple: literally, the two of us, Dionne Brand and I, would walk in Toronto, thinking and talking about the city, about cities, for a short film and live discussion. This would happen towards the end of October 2017, late in the year but not the turn of the year.

I already knew Professor Brand, of course; not only as one of Canada’s most distinguished living writers. She had been the face and energetic voice and silver-and-iron dreadlocks in front of me in the minibus provided by Trinidad and Tobago’s Bocas Litfest in 2016, forgiving me for missing her sessions in town while I researched cocoa farming in the countryside. Port of Spain was our city of non-coincidence. She had been a name that puzzled my younger, Oxford-medievalist self: I noted that this author in anthologies belonged to both Canada and Trinidad, and I grew mistrustful of gatekeepers’ use of word ‘diaspora’ as a global north excuse for suspending thinking in a kind of third place.

What took my breath away was also simple: the rare recognition that Brand’s 47 years in Canada and my 26 years in the British Isles had made us writers of place, of and from these places, and that we two would meet as citizen of Edinburgh and citizen of Toronto, despite our sedimentary connection of having been born in the same island of Trinidad, some years apart.

I grew mistrustful of gatekeepers’ use of word ‘diaspora’ as a global north excuse for suspending thinking in a kind of third place.

Air travel, especially when landfall is made only after a long interval of ocean, is a mode of disconnection and forced resemblances. The white haar which rises from the Firth of Forth to mist my Scottish home, three Georgian storeys high, was replaced by clouds over the Atlantic. These clouds in turn were stitched by the mind’s habit of continuity into a likeness with the pearly fall chill over Lake Ontario. The lake’s choppy expanse, with its cancelled boat rides and its out-of-sight-but-known-to-exist tourist and non-tourist islands, was almost all I could see from a window more than forty stories up. From this height, humans looked like string-theory versions of a body you could meet: heads viewed from above, the rest of their length and complication inferred. At this point, Toronto itself seemed most imaginable in terms of its warm, busy tunnels, with their underground eating and shopping; in terms of verticals; or in terms of winter, a literary winter, divided by violent monochrome, as in Austin Clarke’s novel More.

This changed. Dionne Brand proposed a walk along Bloor Street: not the 25km of its historical east-west length, just along a stretch that included Honest Ed’s Emporium, which had opened in 1948 and was now closing. Here the buildings were not yet high-rise; the logic of capitalism, to borrow a phrase from Brand, had not yet razed the human proportions which made it possible to imagine catching even the eye of a person in a high-up window. The emporium was a piece of time travel for me, and suddenly Trinidad did provide common ground. This ‘everything-shop’, as I thought of it, where ordinary people could buy whatever large and small items they needed to set themselves up nicely in their basic household lives, and where the signs had old-fashioned lettering, took me back to the pedestrian-safe Port of Spain of 1970s childhood, with its Chinese and Sindhi everything-shops like Excellent Trading and Kirpalani’s. For such a resource to go meant that a way of life was going: where people might arrive with little or nothing, but had the possibility of clothing their own dreams of homeliness with reality, under one, accessible roof.

I’m really interested in who is living in the city and the exchanges. The physical and verbal exchanges and also the exchange of air. I’m just fascinated by it.

To walk with Brand through Toronto was to become aware of change without being trapped by lamentation. While Brand herself, in a 2015 interview with A.R. Jardine for The Puritan, is quoted as saying: “I’m really interested in who is living in the city and the exchanges. The physical and verbal exchanges and also the exchange of air. I’m just fascinated by it. I notice that people are trying to live, and I witness how they’re doing that. All of it isn’t benign. I’m not interested in making it just benign.” Brand’s poetic narrator of a city in thirsty (2002) declares, “I am held, and held”. Brand actively practises an embracing consciousness of the encounters that could, do, and don’t happen between the city’s inhabitants.

At the moment of filming, the two of us may have seemed to saunter along like individuals in a privileged layer of reflection. However, Brand’s authorial and human awareness is of the city as collective, not atomised. No less real, in fact informing our passage, was life lived otherwise: Canada-wide, the voices and actions of those re-shaping the context for bodies like ours (female-presenting; ‘of colour’): the activists of Dionne Brand and Ginny Stikeman’s film Sisters in the Struggle (1991); on Bloor Street, the linguistic and cultural zones that succeed each other. Unavoidably, we listened like poets. Each neighbourhood added a layer to the music of Greek, Korean, Hindi and more, each rhythm implying another syntax and another world view. 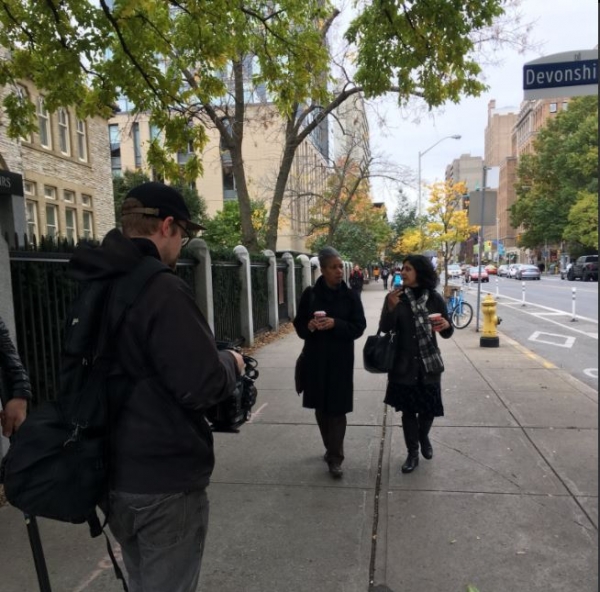 We hung out at the corner, at a crossroads. This is the place of the trickster god Papa Legba the opener of ways, of West African origin, but active in the Caribbean. The corner is where you hear voices alter: people wait for a space or hurry by; the architecture makes echoes, or swallows sounds. I remembered Kayo Chingonyi on the Out of Bounds place poetry project in the UK talking about street corners having a specific character of their own, worthy of being lyricised. Dionne and I recalled the old-time Caribbean and the neighbourliness of corners: people gathering, talking, ‘liming’ (passing the time). We thought about women at street corners, doing sex work or mistaken for sex workers, and whether or not, in the bodies this life has allotted us, we could settle differently into this provisional space. We laughed like we didn’t quite like it as we counted up the cities worldwide where we had benefited from the illusory landmarks of samey British colonial architecture, making you feel as if you knew where the railway station or town hall must be; that in the wake of empire’s displacements, lostness was impossible. We thought about other simultaneously real and misleading ways of knowing you are ‘at home’: by the pace of the walkers, the volume of conversations, the positive quiet of Toronto (and some parts of Edinburgh) contrasting with Glasgow or Port of Spain’s noise and bounce.

Through our exchanges in this one and various place, Toronto, sharing the time of one stop-and-start excursion, we identified what had been the first cities to us, forming the idea of ‘city’ in our imaginations. As it turned out, I, the younger poet, growing up in Port of Spain, had been fixated on the ancient world in the stories we inherited or had imposed on us: mine were cities of gods at war, Troy and Ayodhya in their mythological versions. Brand, a child of the southern part of the Antillean archipelago’s southernmost island, had grown up dreaming of modernity…dreaming of Port of Spain. One person’s legend is another’s reality: we never stop finding this out, but I had to travel to Canada for the point to come home.

Vahni Capildeo, an Edinburgh-based poet, took part in the British Council's Walking Cities project in Toronto with renowned Canadian poet and writer Dionne Brand. You can watch the full video interview on YouTube.